Kevin Space is very pleased to present citizens of nowhere, the first solo exhibition by Yuri Pattison in Austria. The exhibition explores contemporary relationships between truth and artifice conveyed through visual cultures, communication technologies, information circulation and the organisation of space.

citizens of nowhere evolves around a newly commissioned video work embedded in an architecture of sculptural, digital and morphing elements. citizens of nowhere (surveys 03.17) invites the viewer to take the first person perspective of a “virtual tourist” navigating through major sites of the so-called developed world. Inconsistencies and implausibilities in perspective disrupt the seemingly virtual space to present itself as Tobu World in Tinugawa, Japan – a theme park of 1:30 scale models of the most famous sites around the world – where the images were taken. Pattison uses these model sites to explore their capacity to create subjective and collective versions of history and truth whilst shaping national identities structured by those in power. Superimposed with twisted live information pulled from different news feeds, Pattison adds an additional layer of reality-making. The video content is fed using digital signage technology familiar from hotel lobbies, airports and corporate environments, and, like the rolling news, is continuously updated as the project progresses.

The exhibition set up borrows aesthetics both from marketing suite or showrooms and set dressings of curious urban environment that relates to Pattison’s exploration of global cities as sites of financial interactions between digital devices, bodies, architecture and objects. A metal stud separation wall construction inhabiting the space functions as a display, whilst enforcing the overarching play between artifice and truth with the back revealing its unpretty and unmasked side of infrastructure carrying loose cables and stripped off devices. The sculptural and digital elements are connected to a morphing environment, eliciting experiences that may influence the behavior of a body in space: mounted LED panels create artificially accelerated loops between sunrise and sunset, alluding to a globally operating financial and working apparatus where there is always a golden hour somewhere;  in Elitism [/’not everyone wants to live in the city’] speakers disguised as rocks and a miniature cell phone tower planked as palm tree on the back of the wall, display an eight hour relaxation You tube video of city sounds for working on a HTC smartphone, played through a Chinese tube amp used to delude “authentic” sound; a high-back work chair designed to provide privacy, in Vitra Alcove (kowloon walled city kawasaki warehouse redux), conflates comfort/productivity and work/life and is furnished with monitors allowing a tour through the rebuilding of lawless Kowloon City in Hong Kong re-created in Kawasaki, Japan as a gaming arcade – a socially marginalized and abject part of the mega city Hong Kong pushed outside the field of the visible.

citizens of nowhere presents new organisation and presentation of information – both visible and the invisible – through communication technologies and the urban space, testing out the making, manipulation and simulations of experiences that significantly shape complex and contradictory national or global identities. With distinctions between reality and simulation becoming increasingly porous through the use of intersecting visual, spatial and affective languages, Pattison likewise suggests the artificial to be distinctively meaningful. 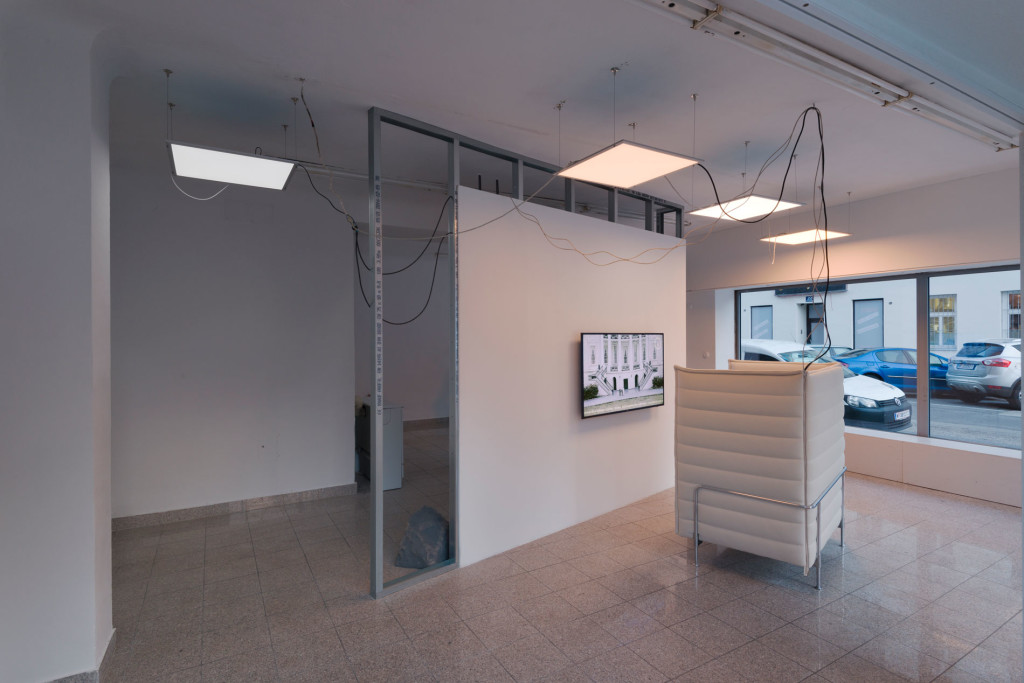 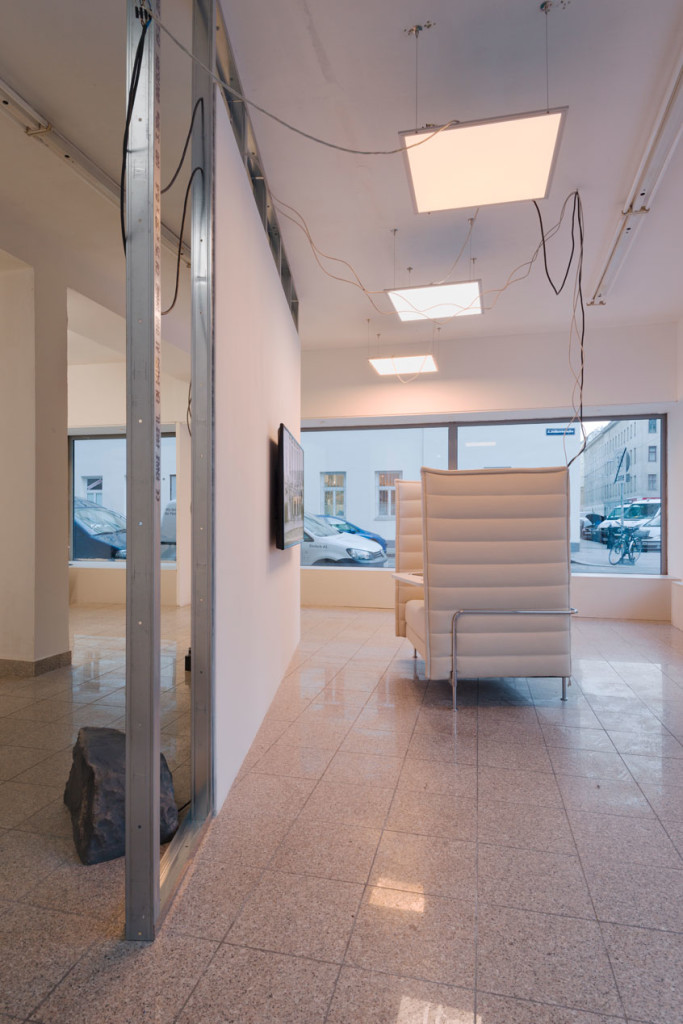 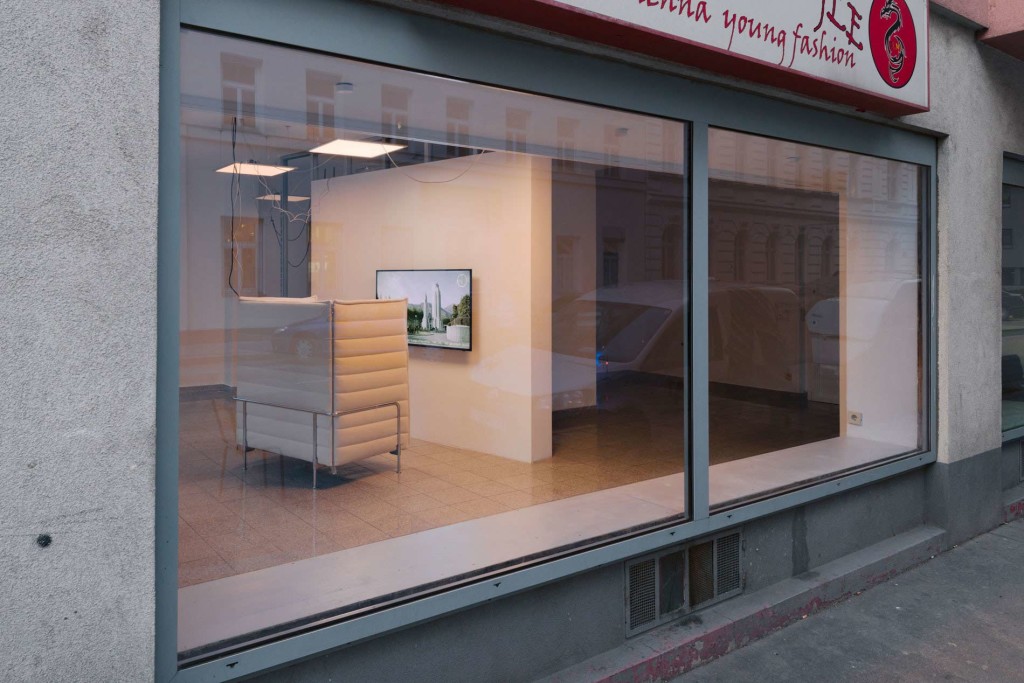 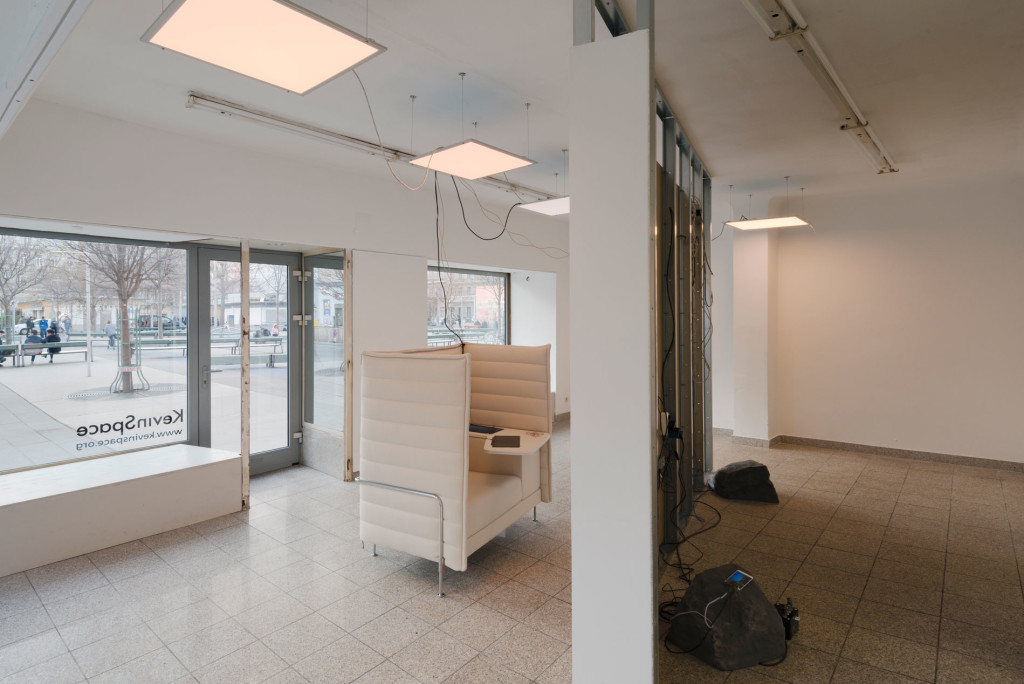 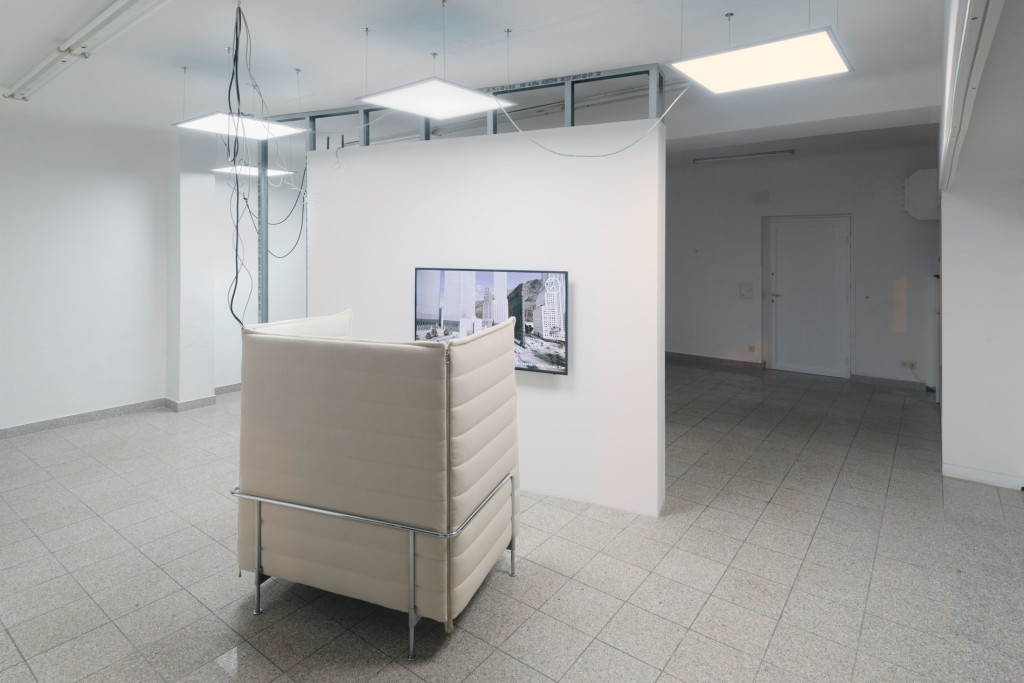 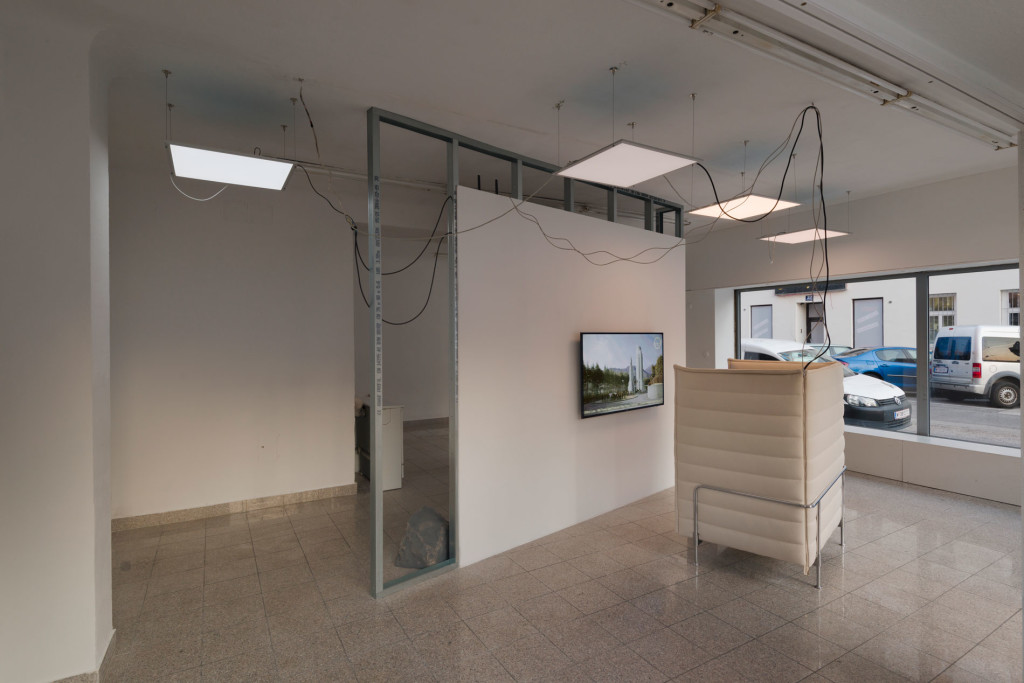 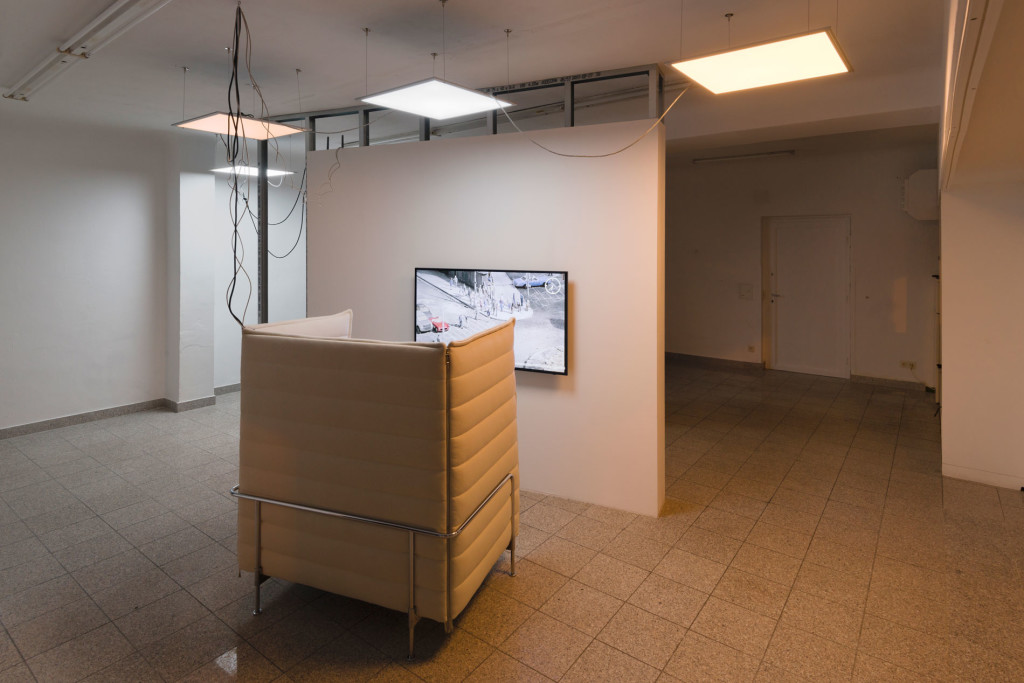 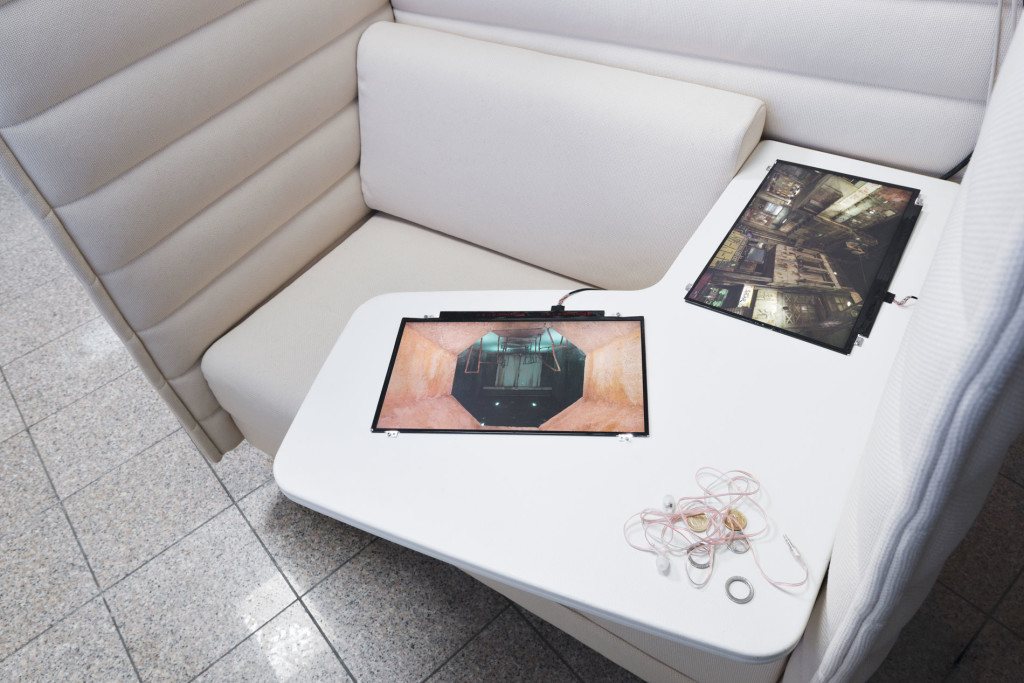