The Sky was Yellow and the Sun was Blue 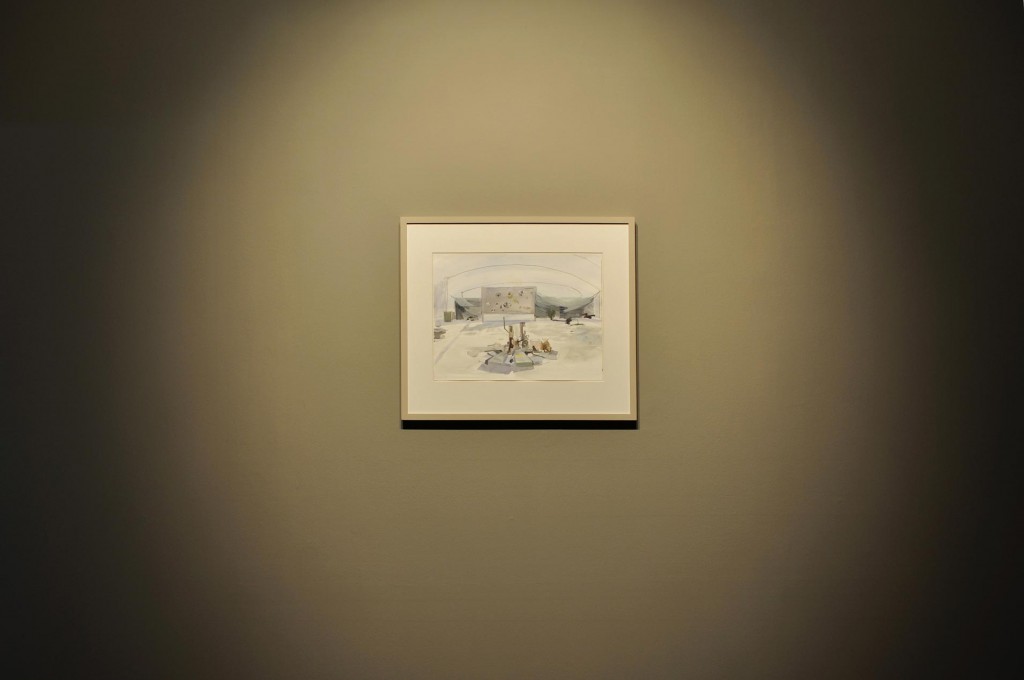 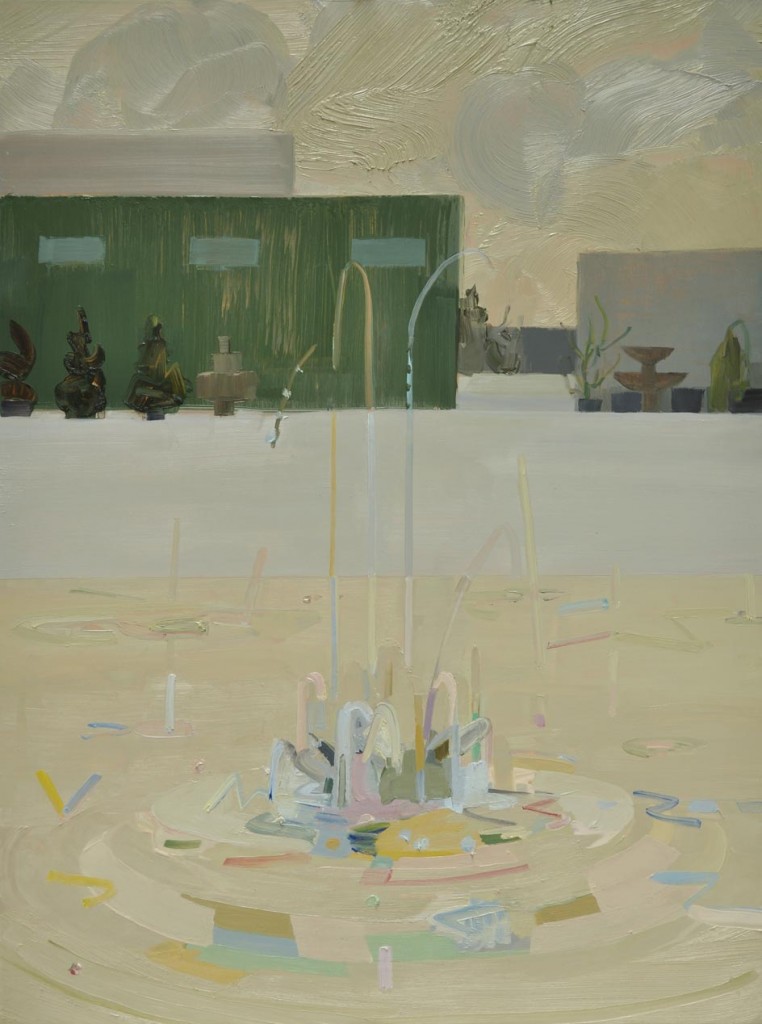 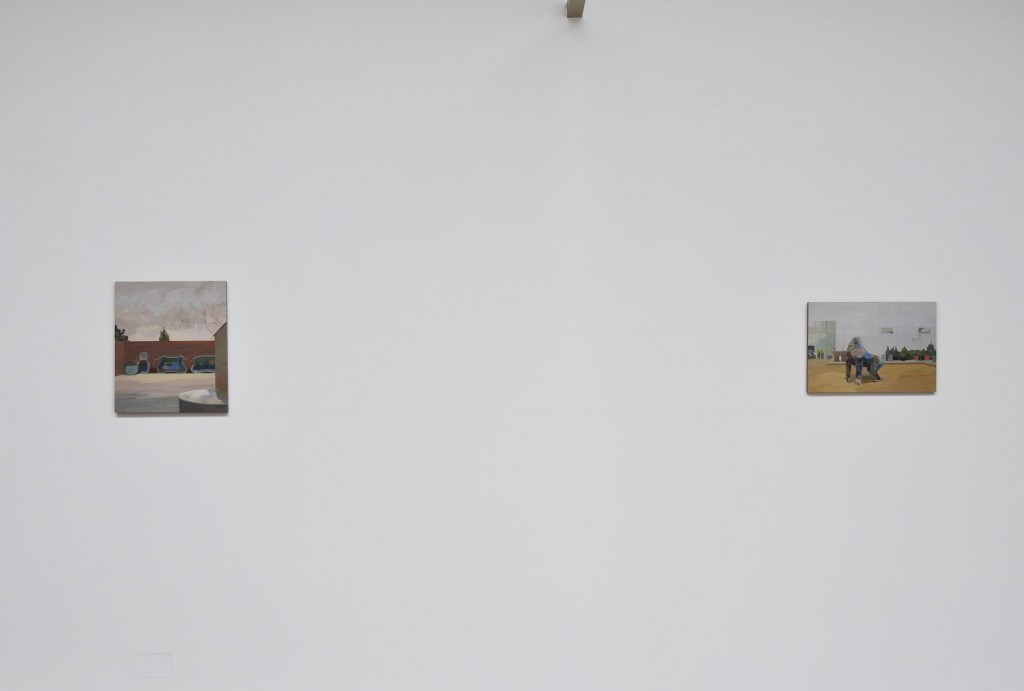 The Sky was Yellow and the Sun was Blue

If we can assume that nothing stands by coincidence or chance, given the considered intellectual and practical construction of Mairead O’hEocha’s work, then the title of her much anticipated, second solo exhibition at mother’s tankstation; The Sky was Yellow and the Sun was Blue1, may at first raise a questioning eyebrow. Does it suggest an unexpectedly anarchistic inversion of the natural order, the world turned upside down? What could possibly be the relationship of a psychedelic Grateful Dead sub-cultural classic from the haze of 1974, to the work of a relatively realist, well, lets say loosely ‘depictive tradition’ painter, renowned for her thoughtful images of Irish semi-suburban/rural liminality? Furthermore… given that the works constituting O’hEocha’s new show, come from her recent excursions to garden centres… then the (perhaps) purple river of questions seems to flow deeper and wider. And as we know, every river has an undertow.

Mairead O’hEocha describes the phenomena of the garden centre as a simultaneously interior and exterior experience where a resultant distortion of the expected colour register occurs.  Normal and usually underwhelming forms; pots, plants, ornamental bird feeders, sprinklers and water features, etc. reinstate themselves in visually unexpected ways. In an intriguing and understated manner, they begin to undermine optical-to-intellectual conventions; pulling the rug from under the psychological and emotional implications of lessons learnt from Newton, Goethe and Itten, respectively2.  If in the real world, the colour wheel impacts upon our comprehension of, and feelings about things, how then does the physical alteration of a poly-dome – an artificial sky, fully worthy of Garcia’s trippiest moments – re-tune the garden centre’s captive surrogates of the natural world – plants, animals, nature, growth, life? What then does this say to us (and about us) as we return and re-populate the greater world – signified here by our almost universal passion for our gardens and the pastime of gardening – with its hybrid mutants, hanging baskets, hi-glazed planters and ceramic frogs?

Developing O’hEocha’s core concerns, The Sky was Yellow and the Sun was Blue, re-focuses her particular attention upon the self-questioning oddness and curious beauty that she understands as the principle constituents of normalcy. In this respect her practice situates itself into a fine tradition that includes such diverse masters of sideways observation/invention, linking De Chirico, Morandi, Avery, David Lynch. Similarly, O’hEocha’s new paintings become enhanced palimpsests that embody the confusion and conflation of rustic, classical, natural, and modern traditions as well as so-called ‘organic’ forms. Realised in her artificial ‘meta-palette’, the paintings contribute to the dislocated sense of place, and a globalisation of the particular. Although sourced from the south and east of Ireland, these garden centres could equally be common to anywhere. What adds to her distinctive interest of the garden centre as metaphor (both globally and within contemporary Ireland) is the duality of the relative wear and tear of the ravaged economy on these outlets and their promise of social escape. The irony of the recent upsurge in the desire to grow things, to be more self-sufficient and in tune with the natural world, does not escape O’hEocha. Rather what is created is another industry intent on distraction or making us feel better about issues beyond our reach or out of our control. Developing this train of thought to its extreme conclusion, O’hEocha’s exquisitely constructed paintings serve as reminders that we are sub-consciously busying ourselves with the erection of bird-feeders or, heads-down, dealing with slug problems, trying our hardest not to notice (nor perhaps) care about the world as it slides gently towards the economic and political abyss. Garden ornaments watch on ironically as the world implodes.

1 From: Scarlet Begonias, The Grateful Dead, 1974. Lyrics by Robert Hunter with music by Jerry Garcia.
2 A century after Isaac Newton, Goethe expanded on Newton’s theory by studying the psychological effects of colors. In addition to determining that colors could be warm or cool, he also associated certain colors with particular feelings. The Swiss artist Johannes Itten (who taught at the Bauhaus in Weimar, Germany), expanded upon the work of both Newton and Goethe, developing the theory of color to take into account, not only a color’s contrasting and psychological properties but also its emotional impact. 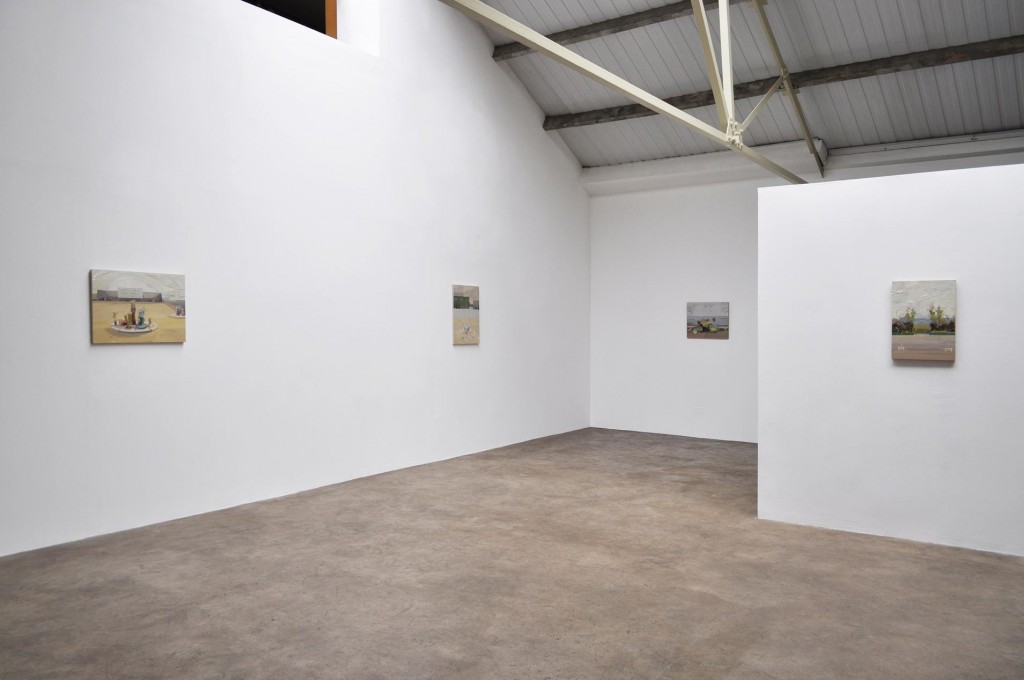 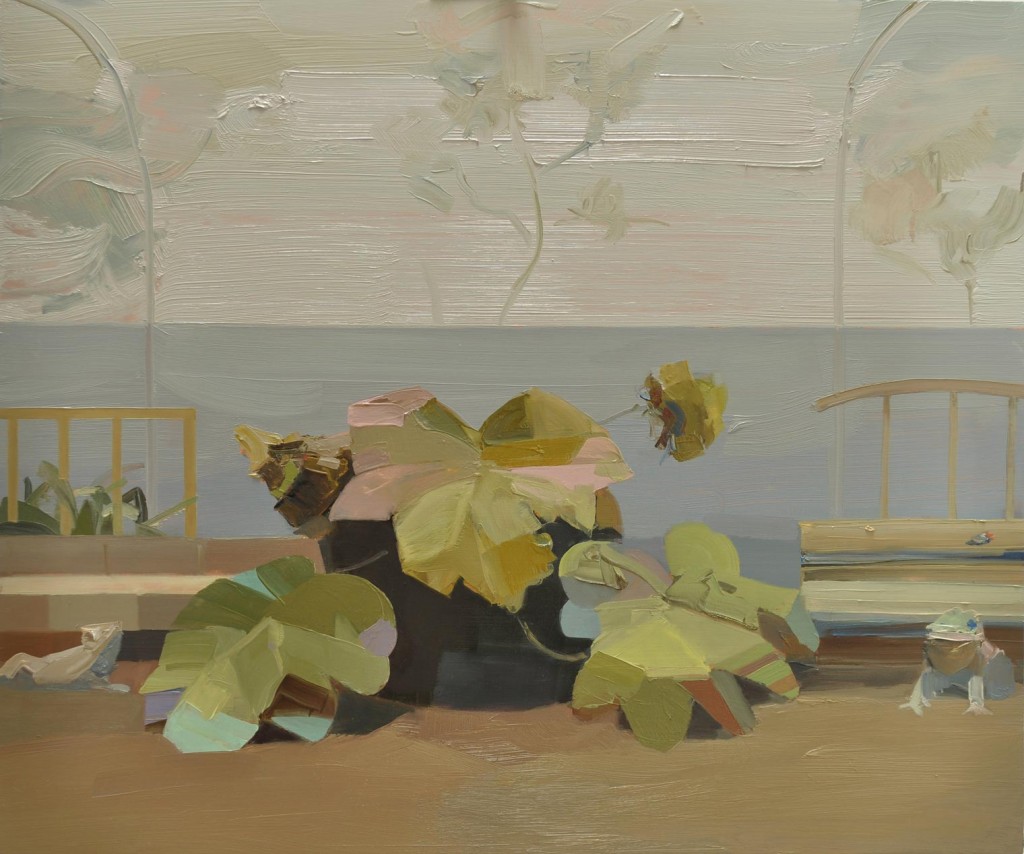 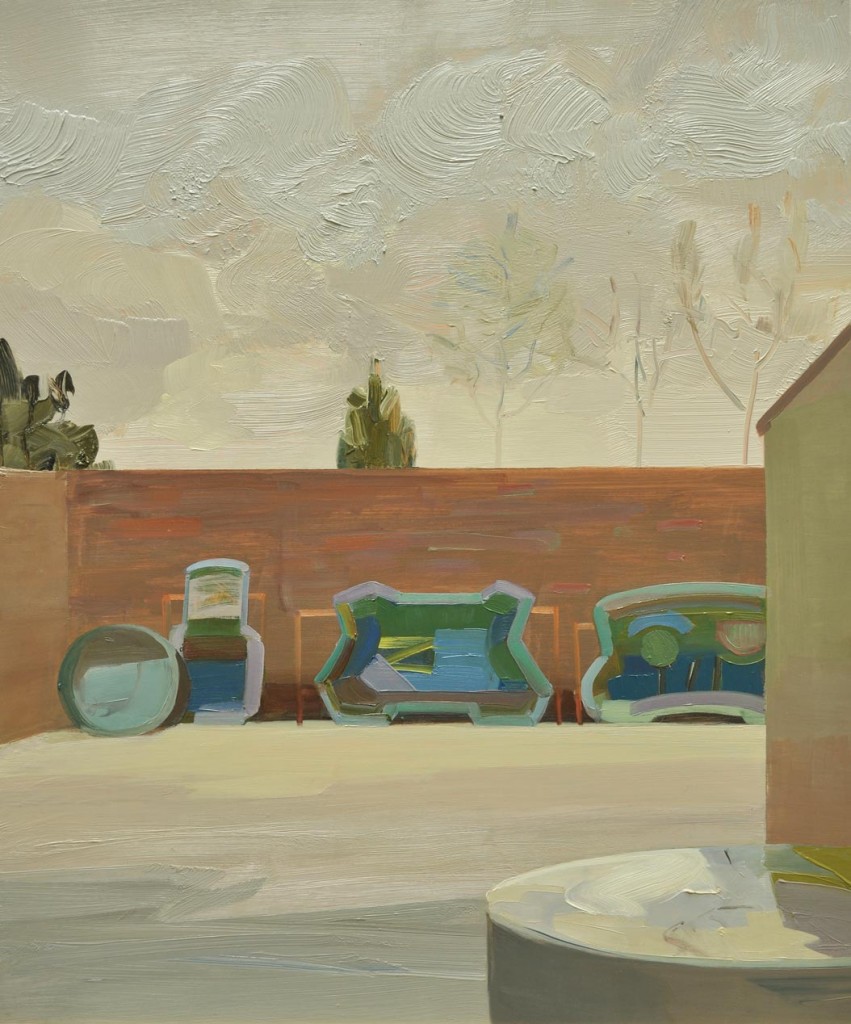 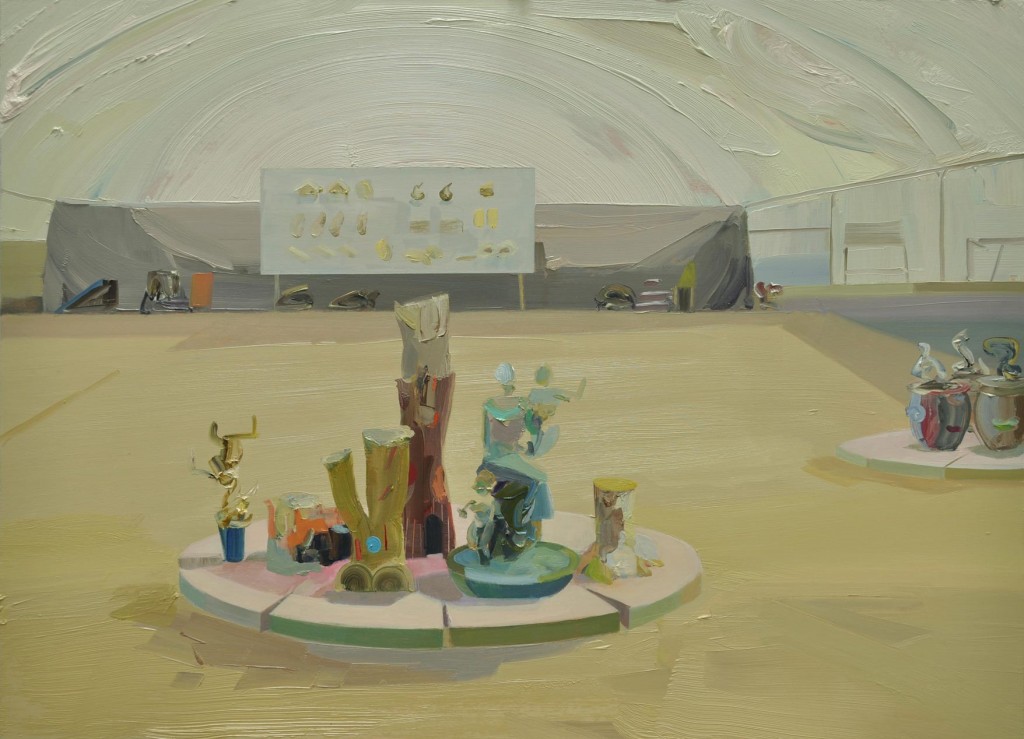 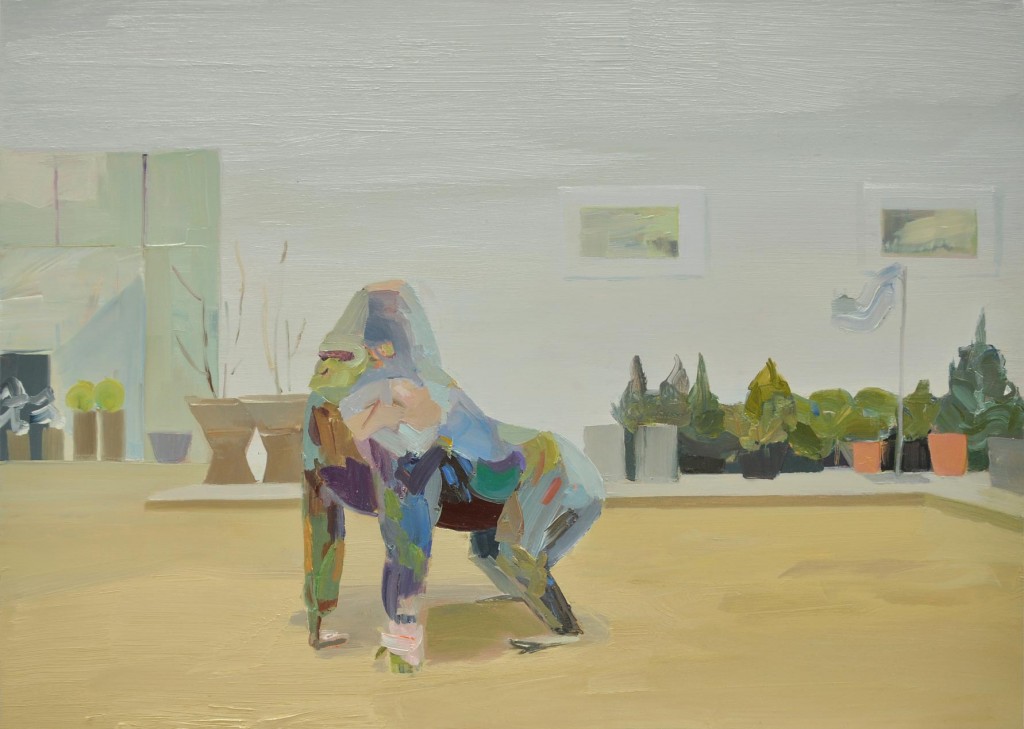 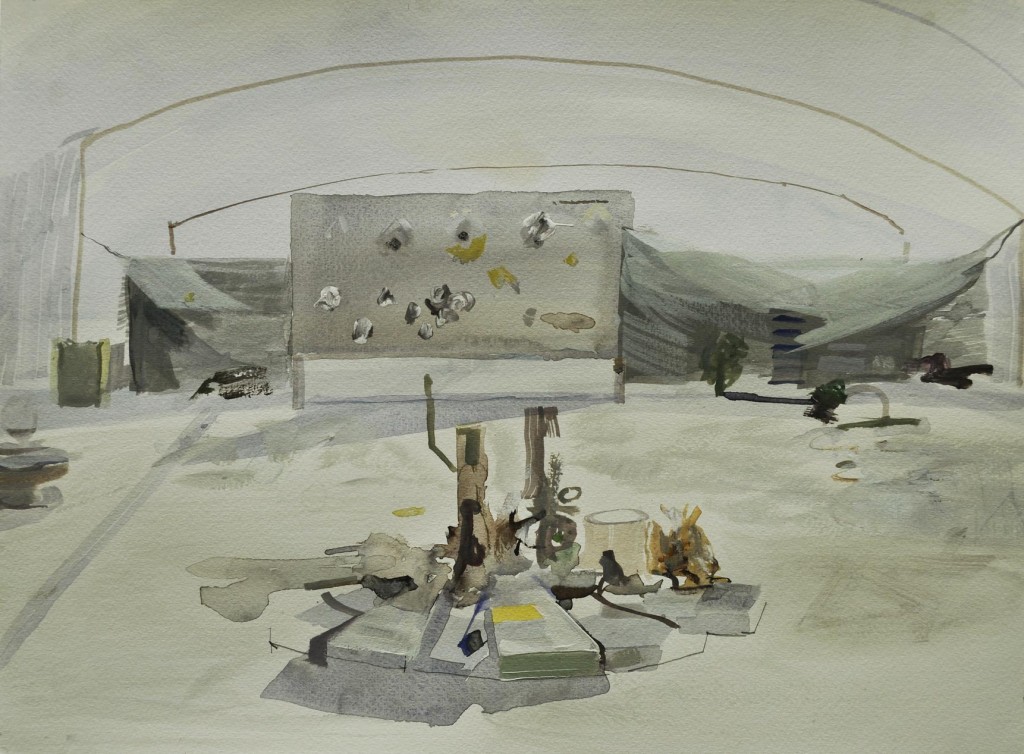 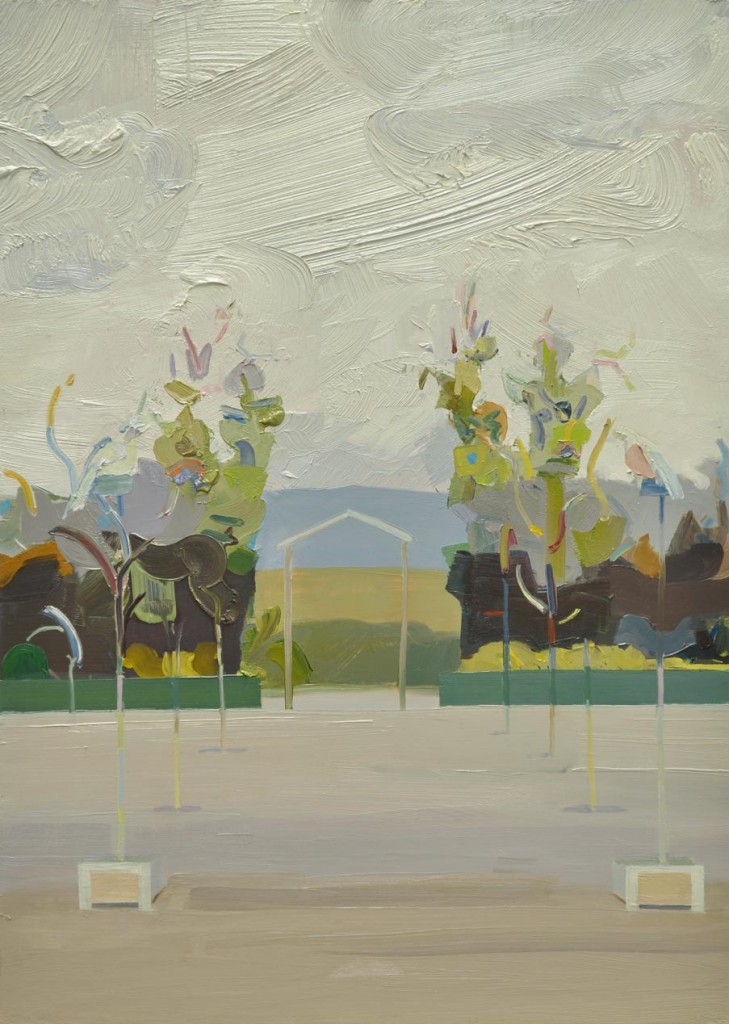 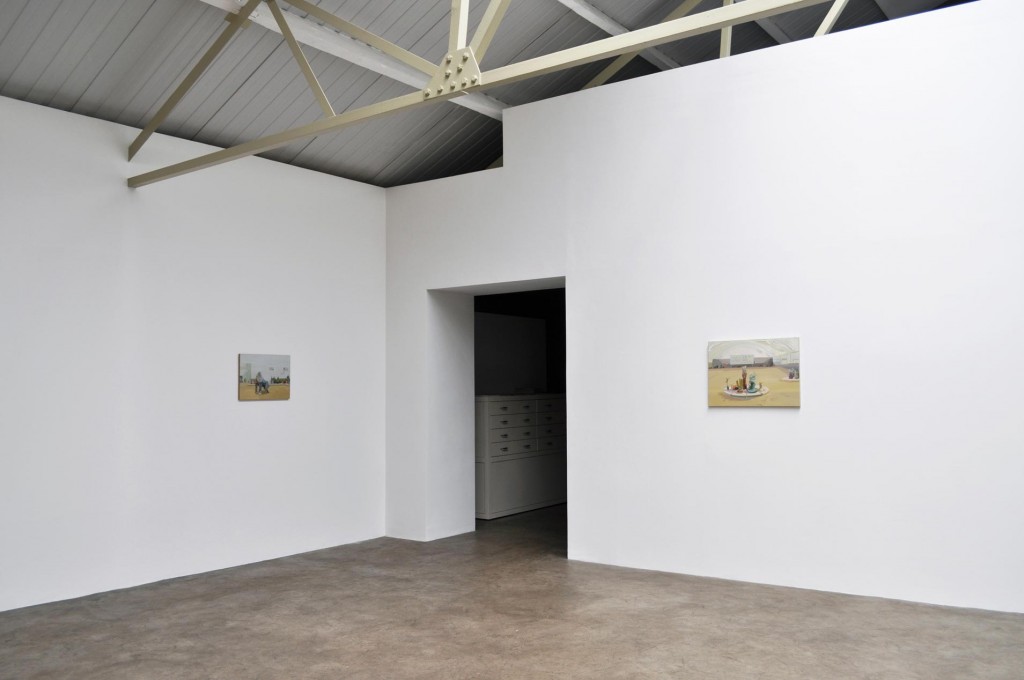