The Moon is kinder than the Sun 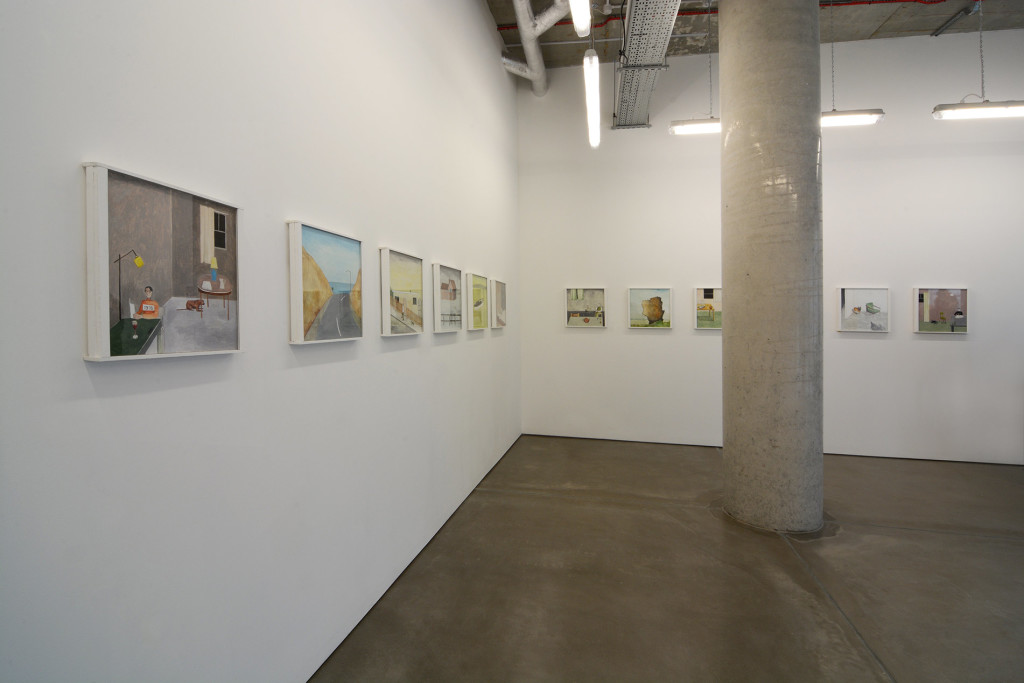 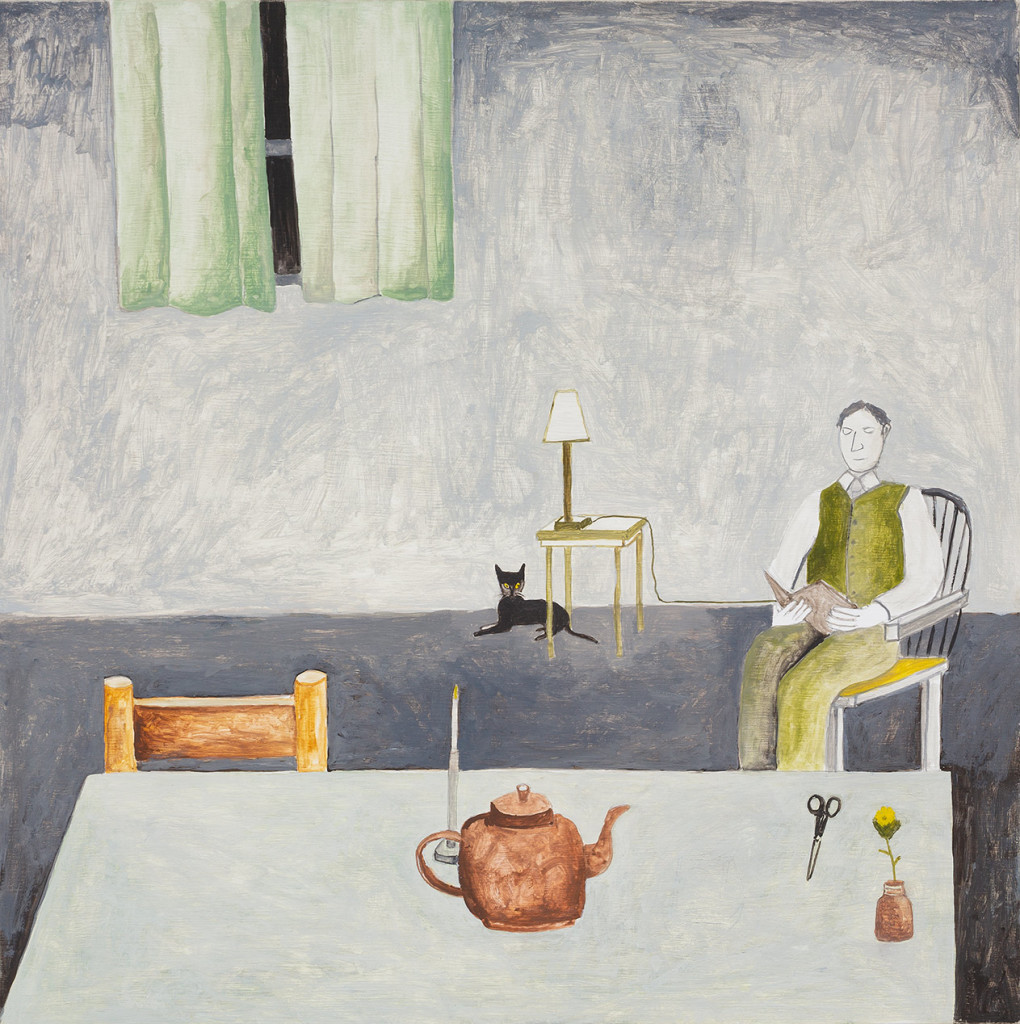 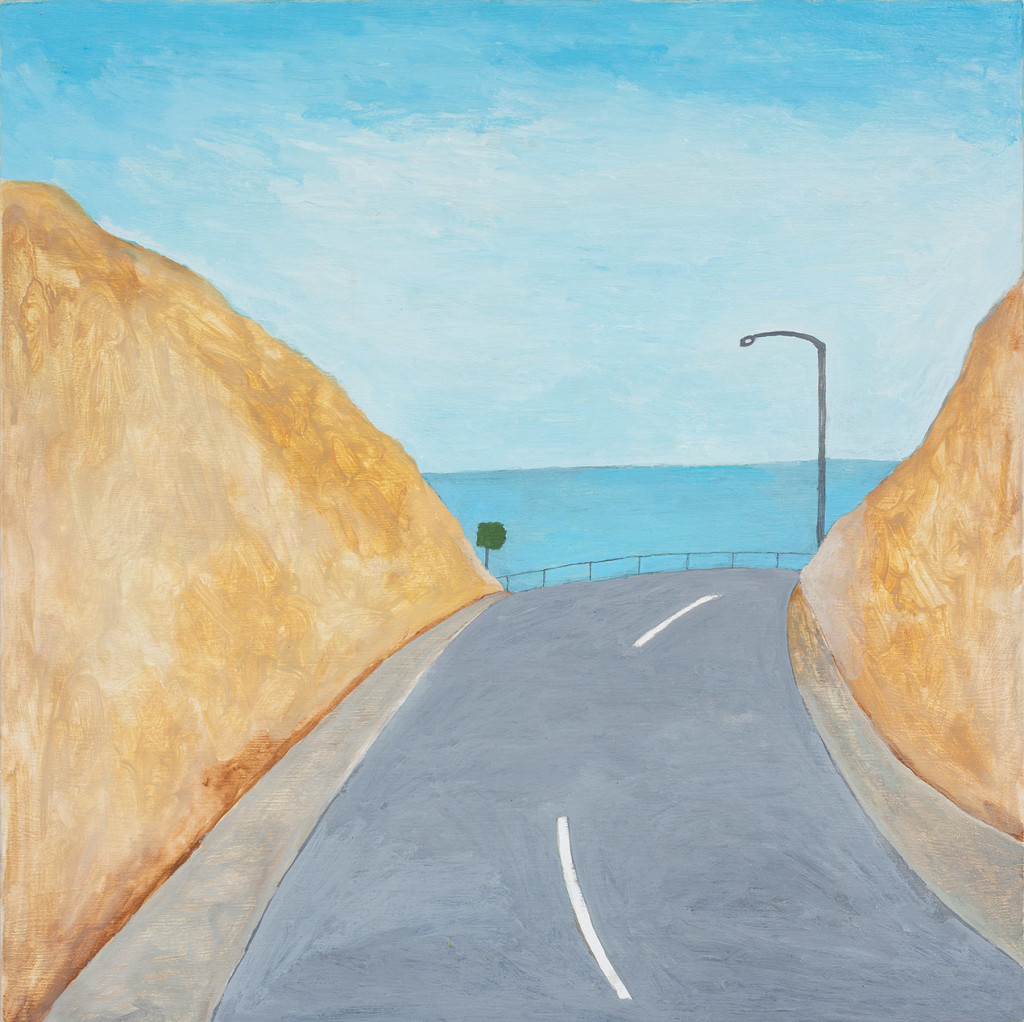 The Moon is kinder than the Sun

A man sits alone in a green room. Well not really alone, there’s a cat, also seated, on the floor, directly giving the viewer the evil eye, or what Michael Bond in the Paddington stories, called a “hard stare”. A penetrating look reserved specifically for those that had apparently “forgotten their manners” or were behaving outside acceptable levels of normal human decency1. It is not untypical of McKenna’s world, in general, that such high moral directives are reserved for the animal kingdom (the artist has clearly expressed his higher respect and fondness for animals above humans2). Back to the room.  The piercing blue of the cat’s eyes are the same as the shirt colour (why waste time) of the oblivious reader, seated at what appears as an absolutely enormous table… It is again typical of McKenna’s pictorial space that the seated figure seems to have no legs, (not) apparent below the giant tabletop. The artist only renders detail if it has narrativistic value, and the lower portion of the lonely reader, clearly does not. The cat, in comparison, appears to have all limbs in approximately the right places and is anatomically and perspectivaly convincing… Still staring at me though.

Other strange things about the interior: please note, although ‘room’ seemed a nicer way to start, I am consciously switching from the designation of ‘room’ to ‘interior’, as it is a significant metaphor in the McKenna oeuvre, determining an inner space, a mindscape if you like, rather than landscape (roomscape?). Lighting; odd… the super-high back wall of the characteristic just-off-square composition, painted in washes of oil on plywood panel and hand (idiosyncratically) framed in white-painted, cut-down tongue and grooving (local Rose Bay hardware shop), is dominated by a smallish black window and, once again, and enormous curtain that extends all the way down to the floor level, and perhaps a bit beyond, and compositionally connects the window-to-the-reader-and-his huge-table – no text on the book’s spine… Outside the window it’s beyond nighttime. There is no light, none at all. In fact, the blackness is sucking what light there is from the interior and vacuuming it into outer space. The void is in perfect visual alignment with the unblinking cat. Make it stop! A pendant light, un-illuminated, hangs from an invisible ceiling, or rather the top edge of the painting. A modernist, boxy, floor lamp, complete with power cord (McKenna is my favourite painter of power cords), that vanishes behind the magically over-large curtain, is the only apparent source of light in the room, apart from the fact that the space actually seems day lit (no shadows), despite the light-sucking window. Perhaps the invisible ceiling also hosts an equally invisible array of powerful fluorescent tubes, washing-out colour from the pale greys of both table and floor. It’s not troubling the cat however.  The painting is titled; Calm c. There’s nothing calm about it.

A closely related work, Calm d, is definitely calmer. The animal sharing the interior space with another table-seated reader, is a largish dog (breed uncertain – bull dog?) tucked under a circularish, ovoid, table (McKenna perspective), situated under a very familiar, and similarly LIGHT-SUCKING window. It’s the same window, same outer void, same nothingness! Fortunately, as a distraction, the dog’s attention is solidly captured by something out of view, off to stage right. All the lamps are illuminated in this instance, and the interior could even be ‘night time’, sort of, again there are no shadows, no chiaroscuro. The reader, thank god, has a glass of red wine, obviously to relieve the interior tension, and moreover, casually sports a turtle neck sweater, bearing the enigmatic text; 1970 3. McKenna here points us to an era where fashion was about individuality, rather than mass identification. There’s a closed book on the table above the unspecified dog, with a cover drawing that looks like a ‘Picasso’ but a spine that reads: Lucien Freud 4. Things are not always what they seem, I wonder if the reader is a backwards-glancing self-portrait of the artist, a youthful McKenna, ‘artists’ as generic identification? Freud and Picasso seem to have merged and apparently we always dream of our selves as young.

In Calm a, the reader looks older, the room too looks older – how does a room look older? The composition is dominated by a table squared-off to the front edge of the panel, with a centrally placed teapot that belittles (diminishes the power) of the cat in this version, who also thankfully, has a slight side-ways squint, and not the front on hard stare. The curtains are nearly drawn, cutting back the light-sucking void to a thin light-sucking slit. There’s a pair of very threatening scissors on the tabletop, but the reader does have legs… The lamp is un-illuminated and there is a single yellow flower in a small vase. It’s all okay.

In Calm e, the staring cat is back. Same staring blue eyes, but threat slightly reduced by its semi-recumbent pose, rather than the full-on, squared-off confrontation. The reader has grey hair, an unlit pipe and black sweater; The Last Poets, it says 4.  Perhaps the reader is stylistically in ‘middle years’. There are two vases now, two yellow flowers, and another un-illuminated ceiling pendant, and the light-sucking void has relocated to the top left hand corner. A long lemon yellow curtain marries the black window, to the cat, to a green chair, to the two vases of flowers, to the black-jumpered, pipe-smoking reader, they are all being sucked out the window. The room has pink walls and a green floor, the exact same pink and greens of a classic McKenna interior from over a decade ago that hangs in our bedroom, wherein its own high window looks out to a light-filled landscape, an airport runway (complete with wind sock), no aircraft, just the idea of somewhere small and very distant 5. I am somehow, just a little disturbed by a painting that has been perfectly happily living amongst us for years, causing no trouble. But I have just noticed that the light-sucking black, from the window in Calm a through e (no b) has mutated to the light sucking black of the floor in my interior.  The interior has suddenly lost its manners.

I recall, that a couple of years ago, Noel McKenna mentioned a work that he had seen and fallen in love with at the Kunstmuseum collection in Basel. He showed me a postcard of a small, grumpy Felix Vallotton6 painting, a black pond at night. It all makes sense now, that pond, sucking light in the dark is out there. I somehow doubt the moon is kinder than the sun. 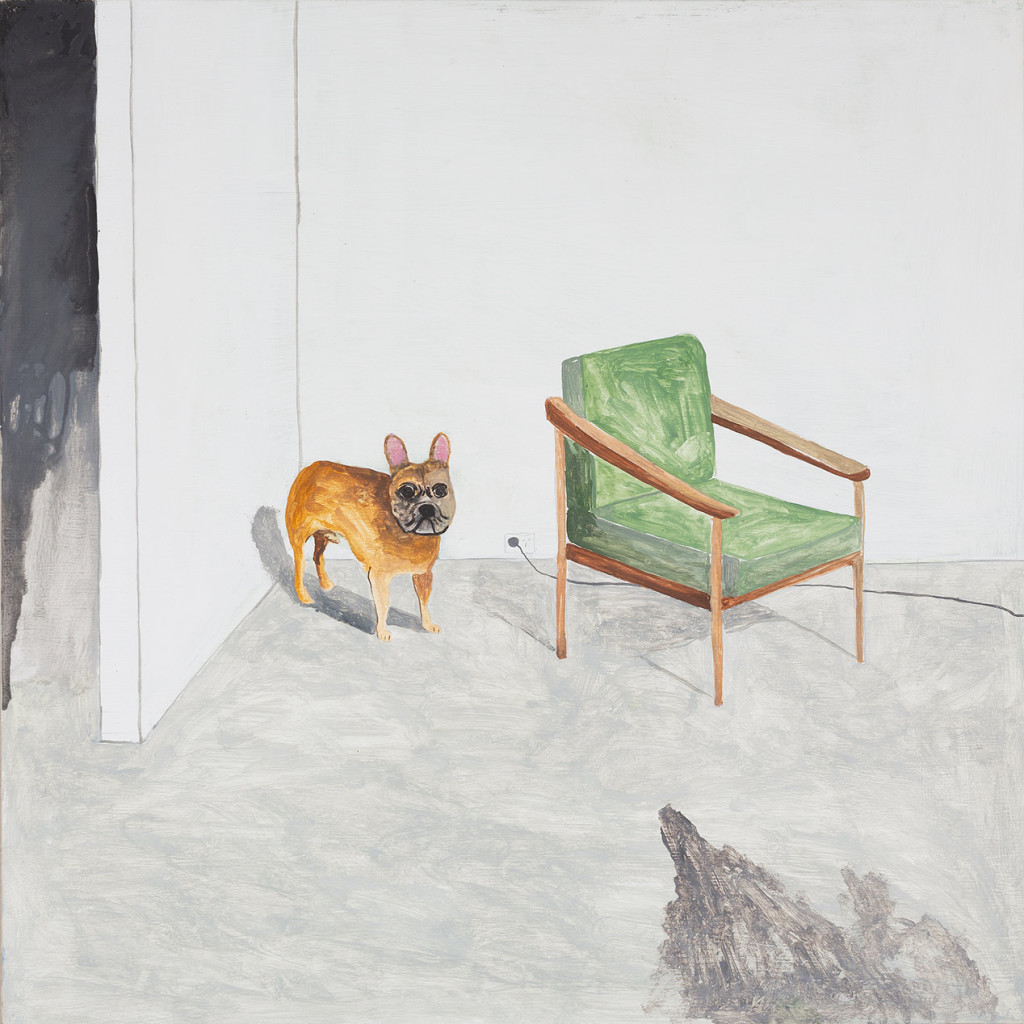 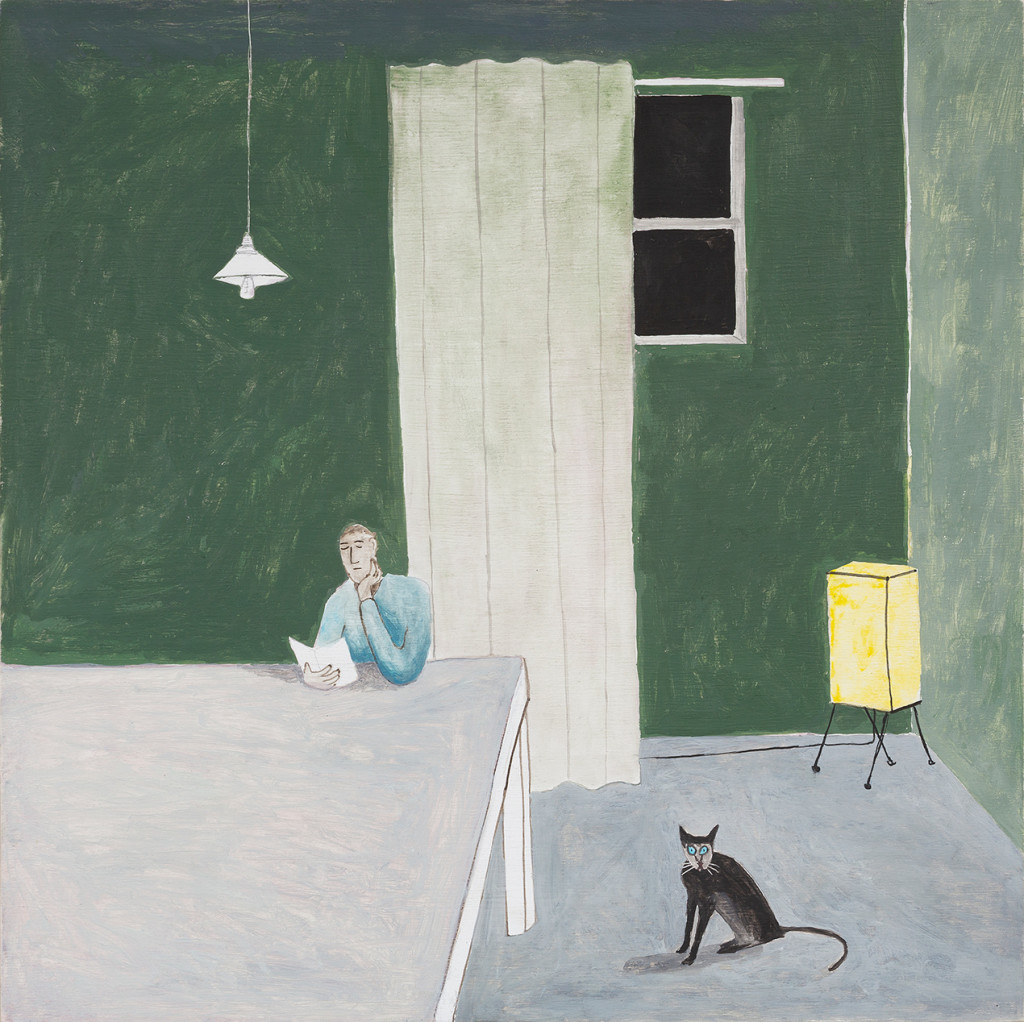 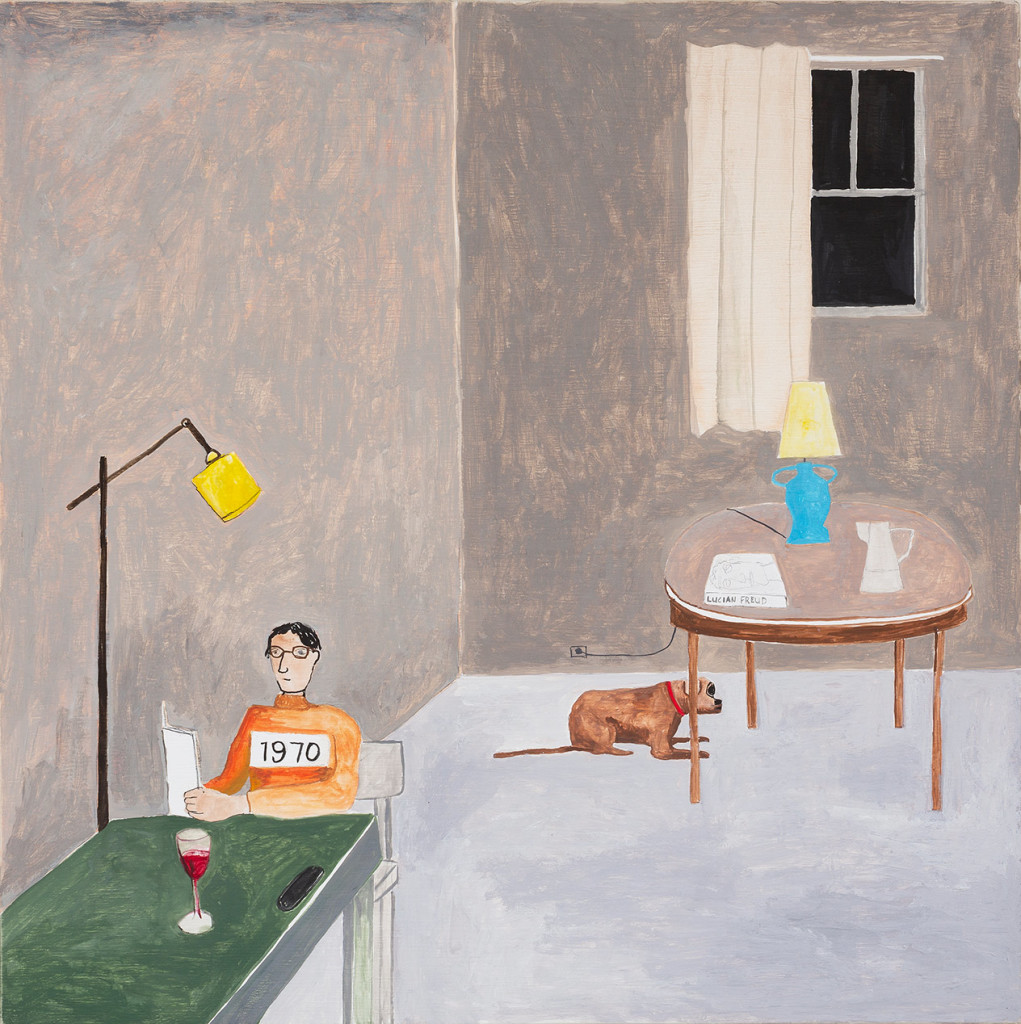 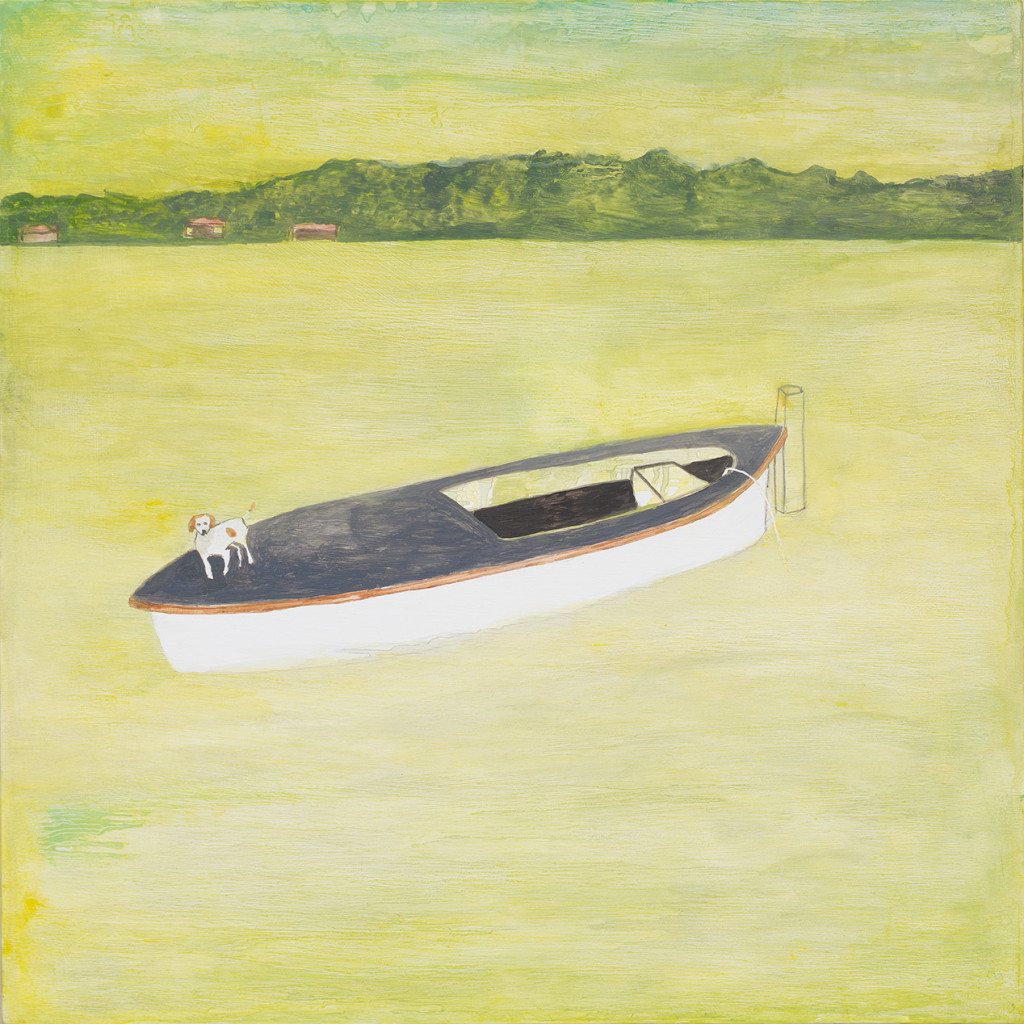 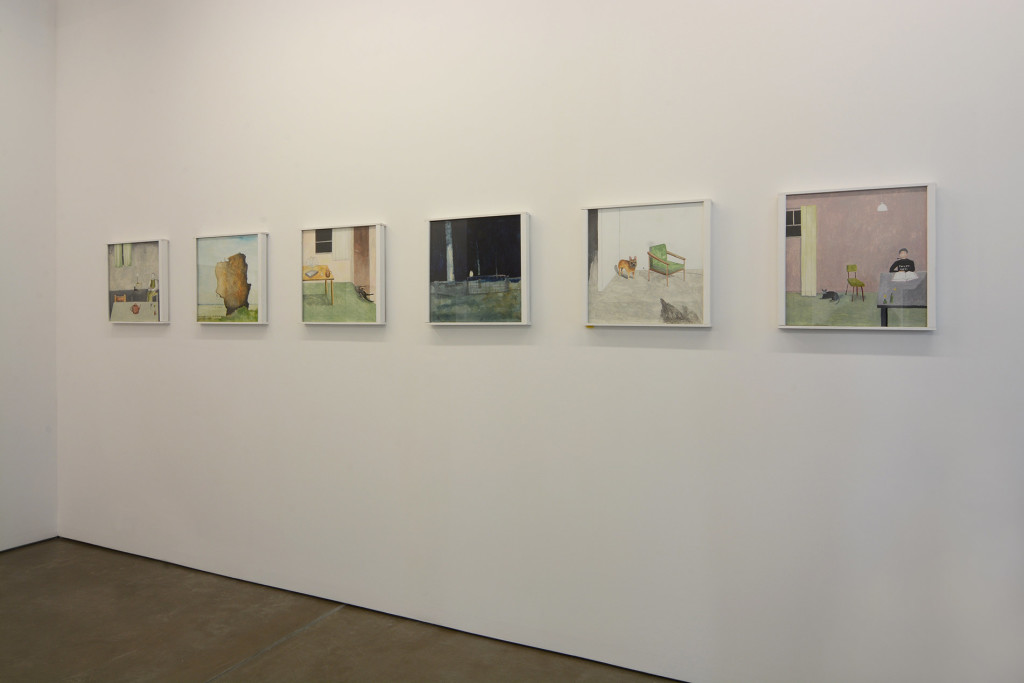 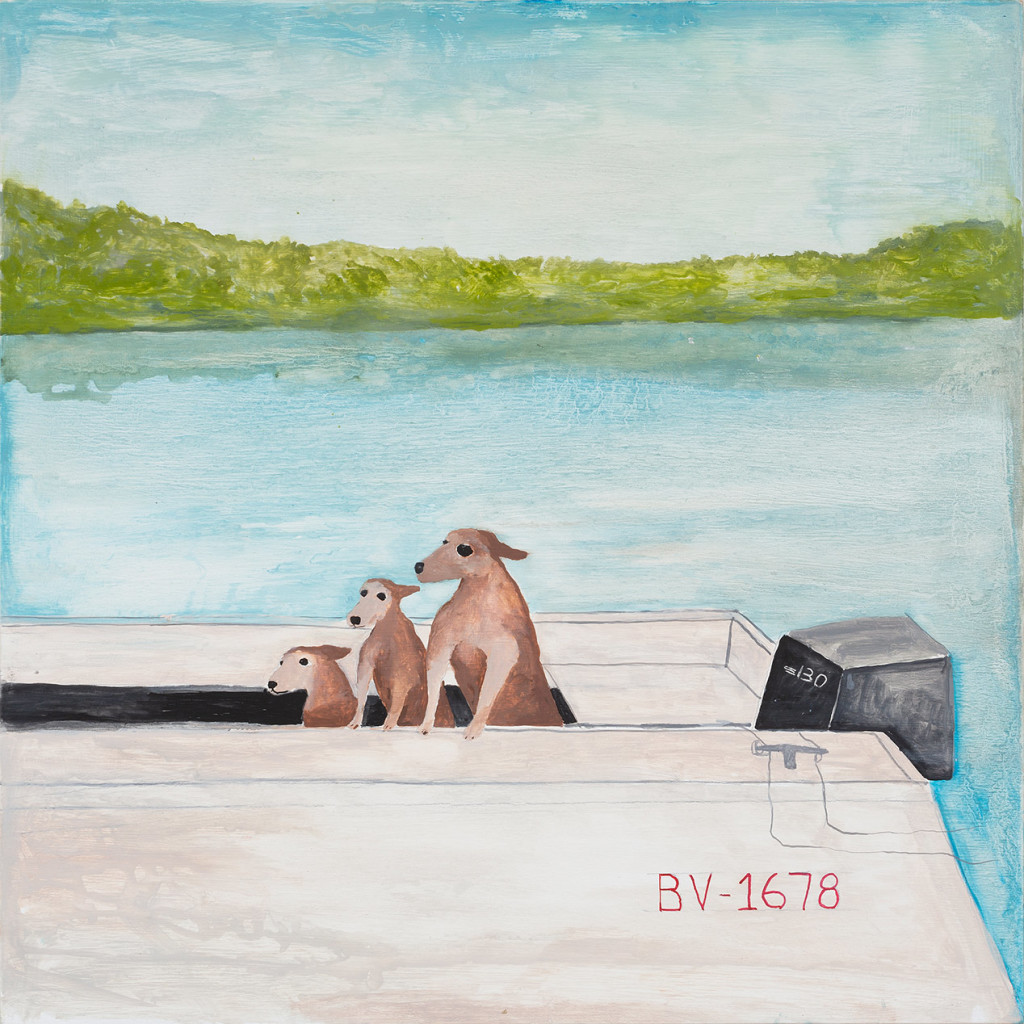 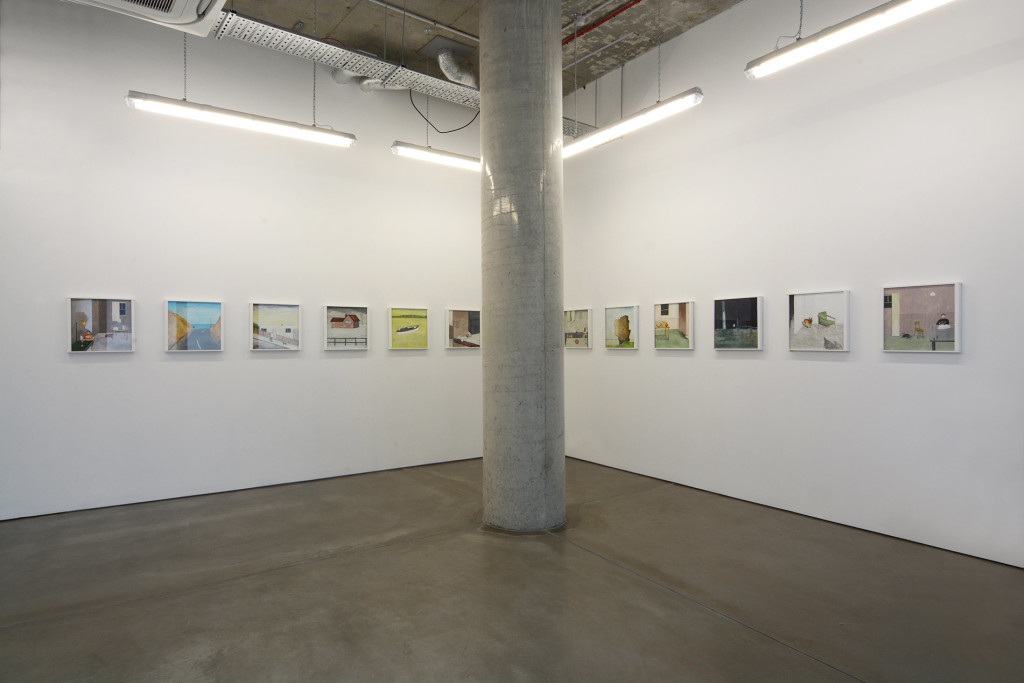 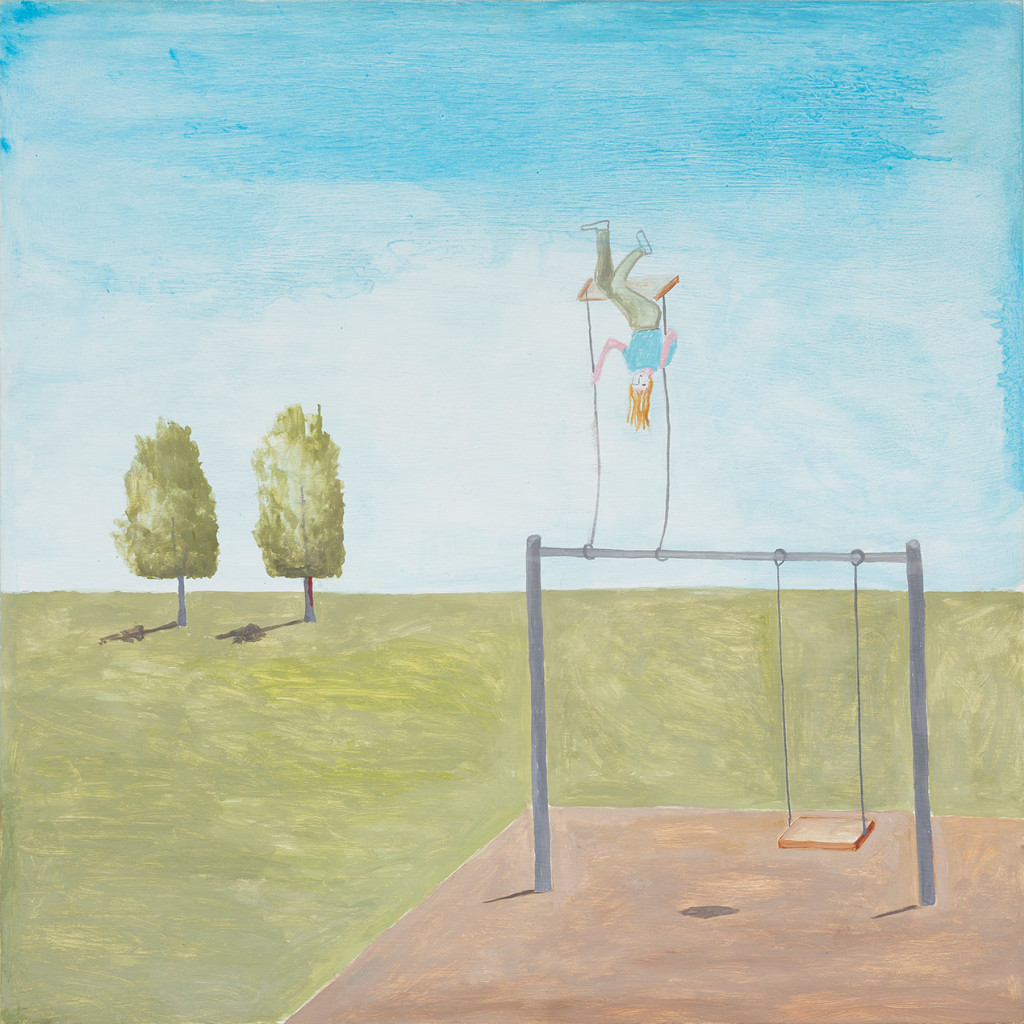 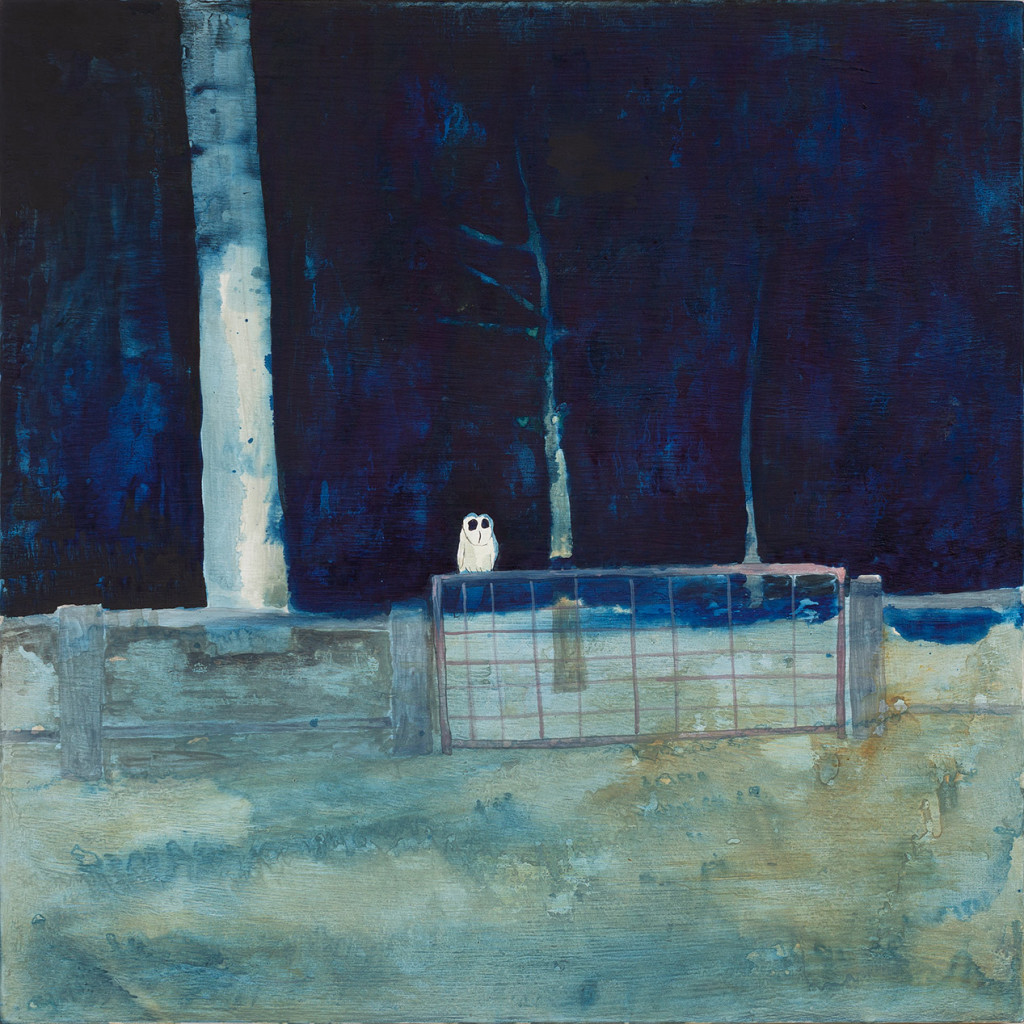 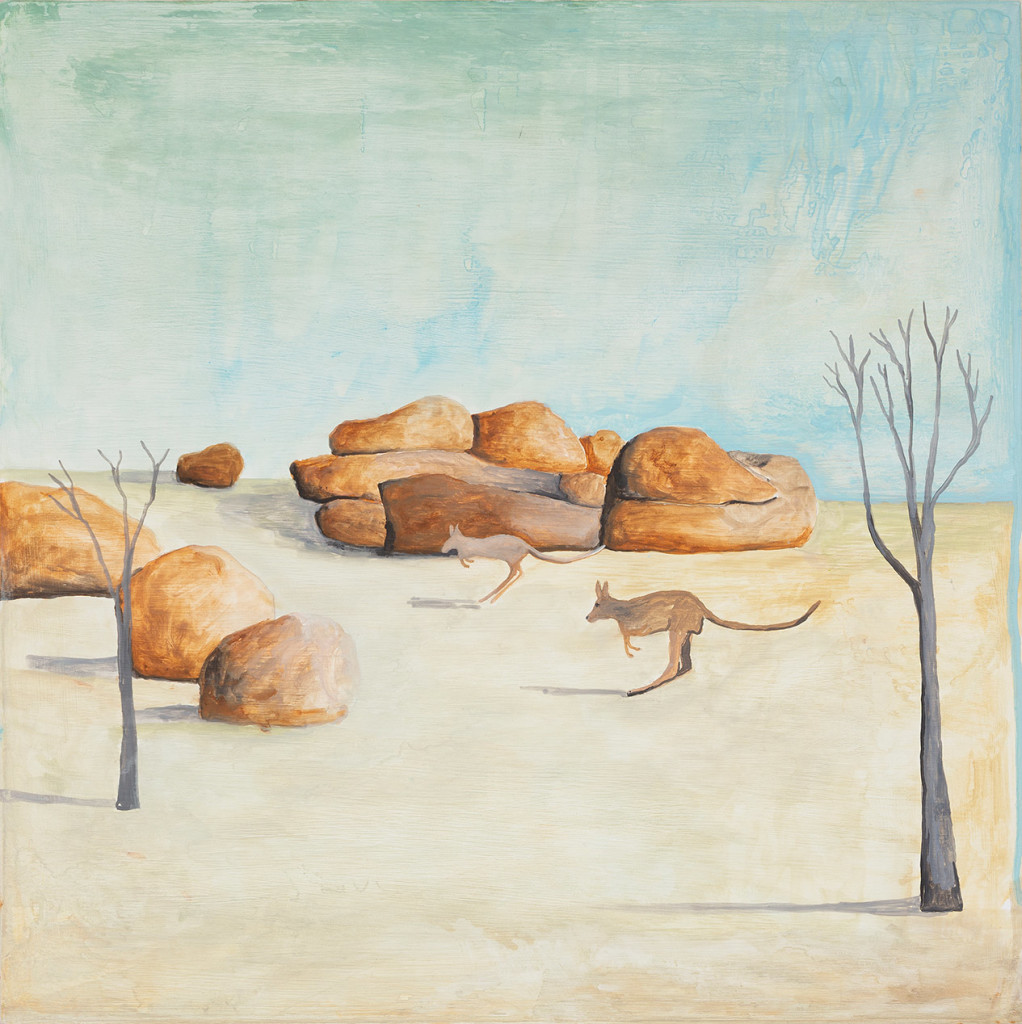 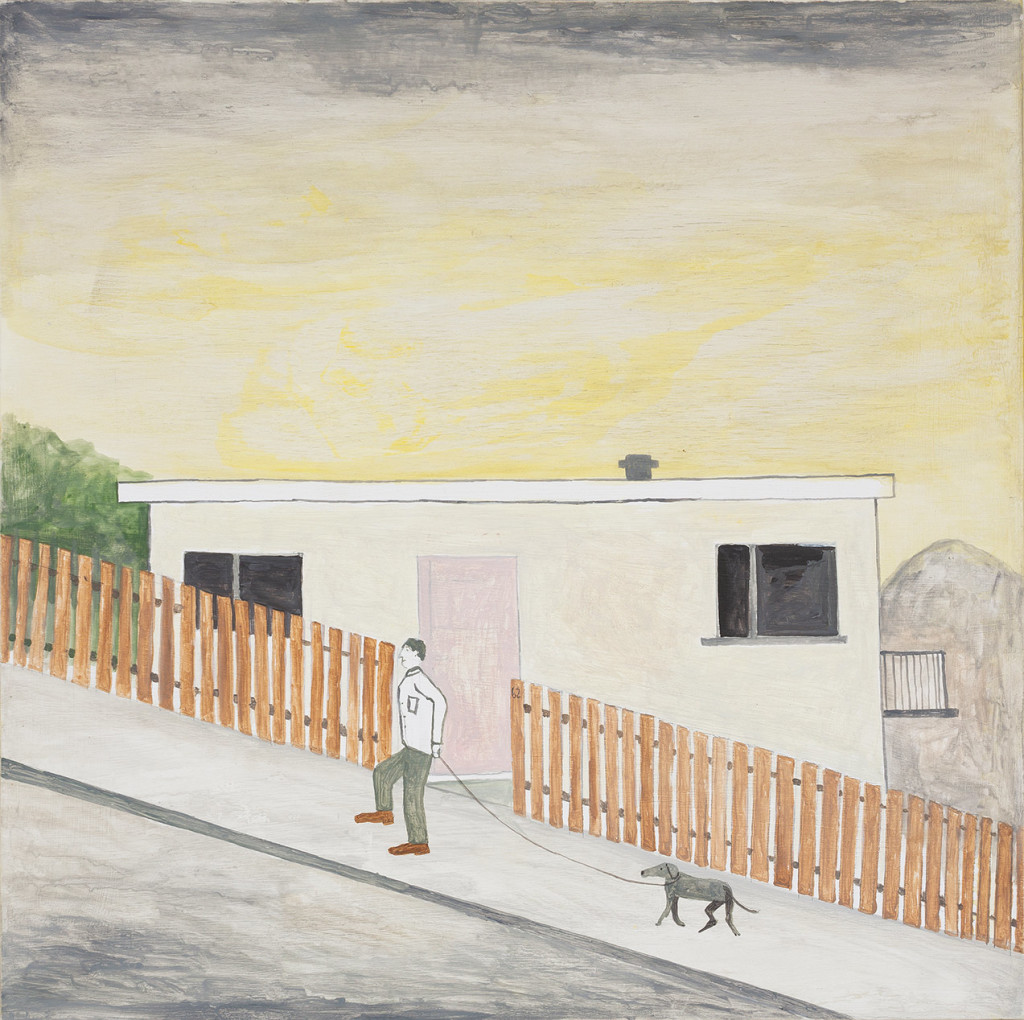 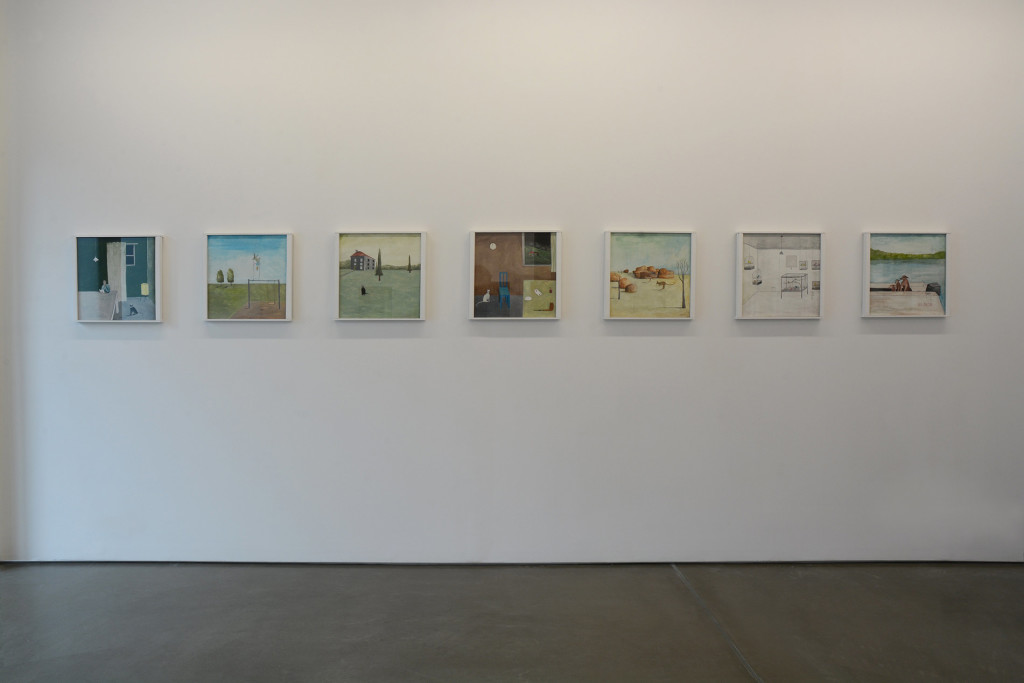 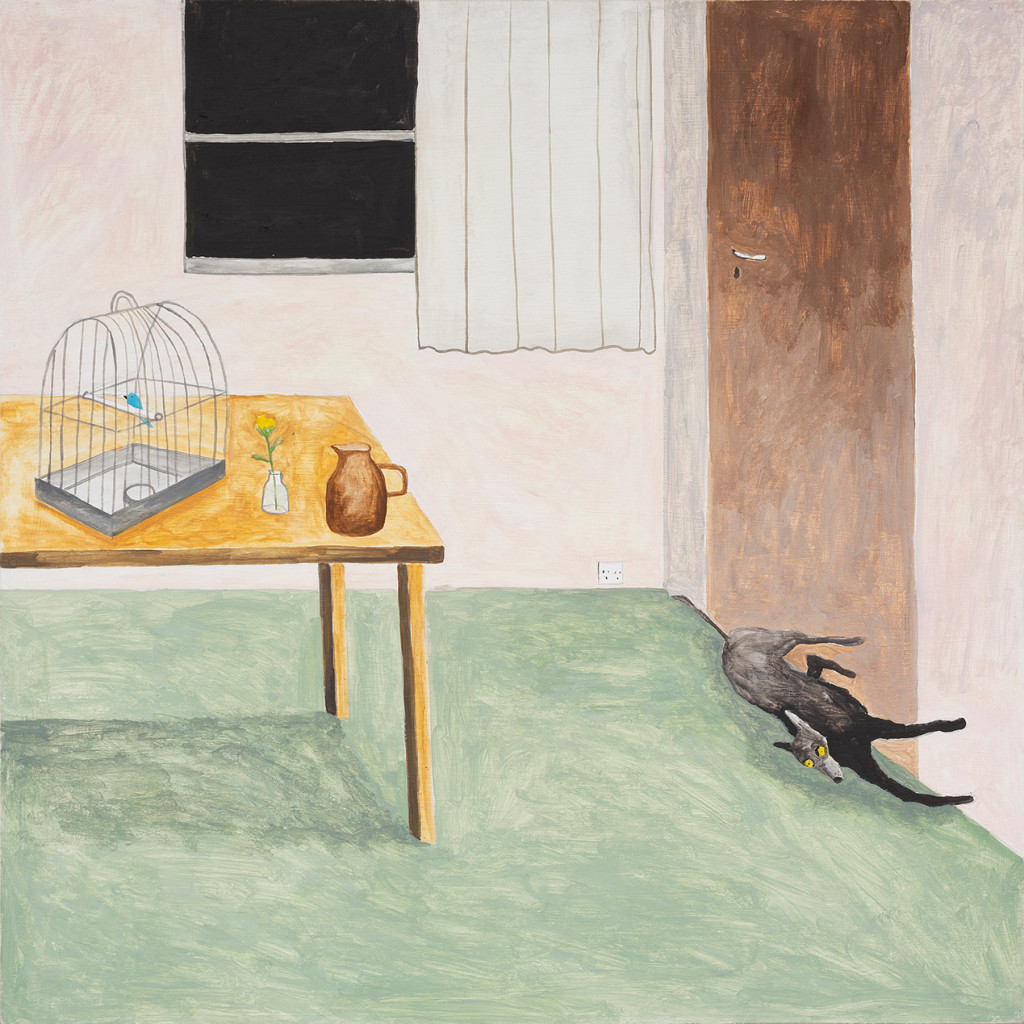 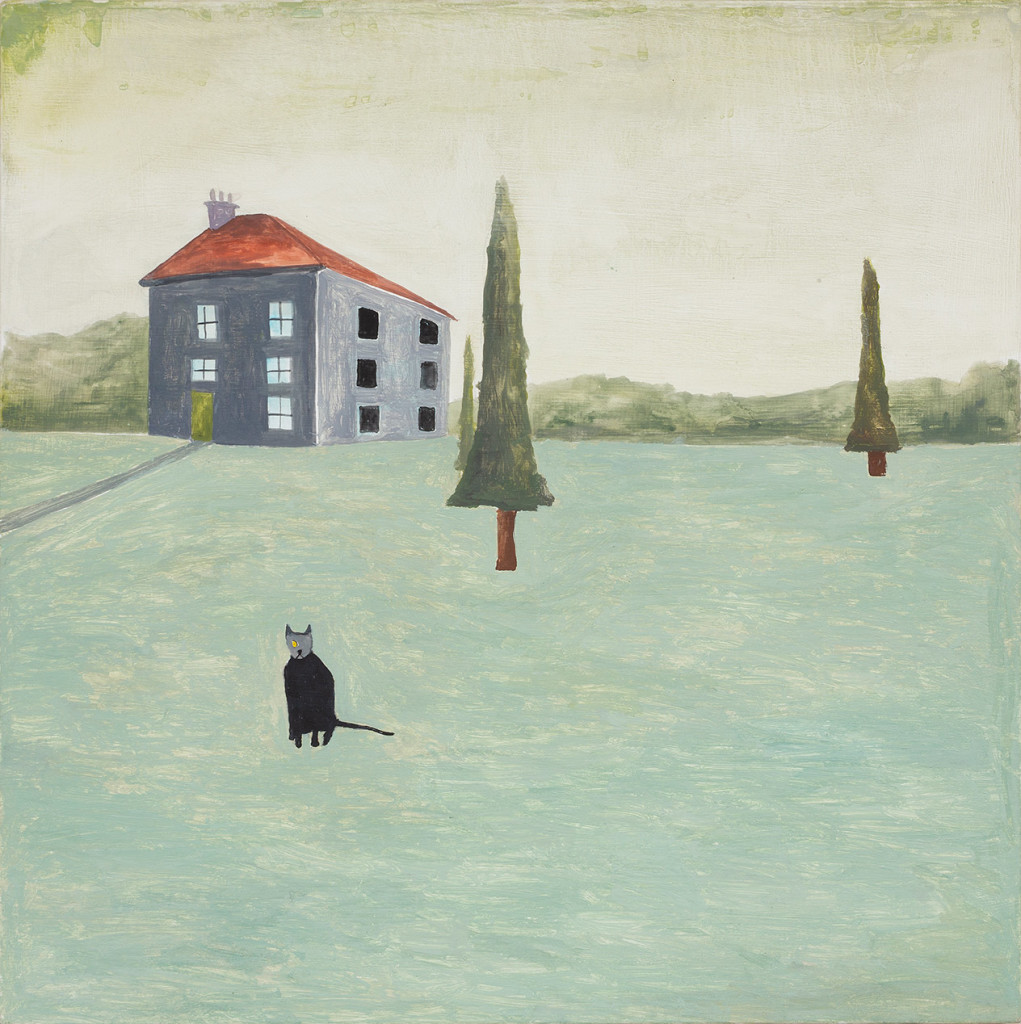 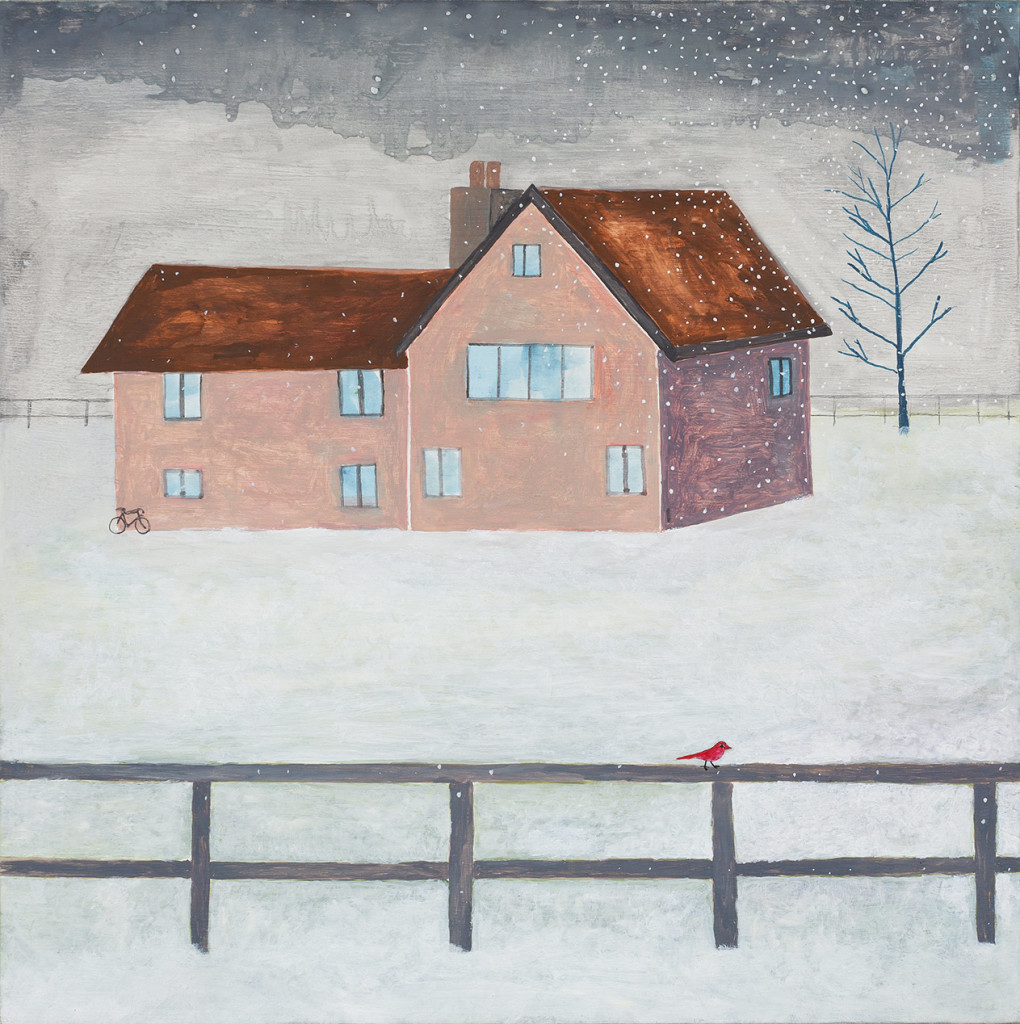 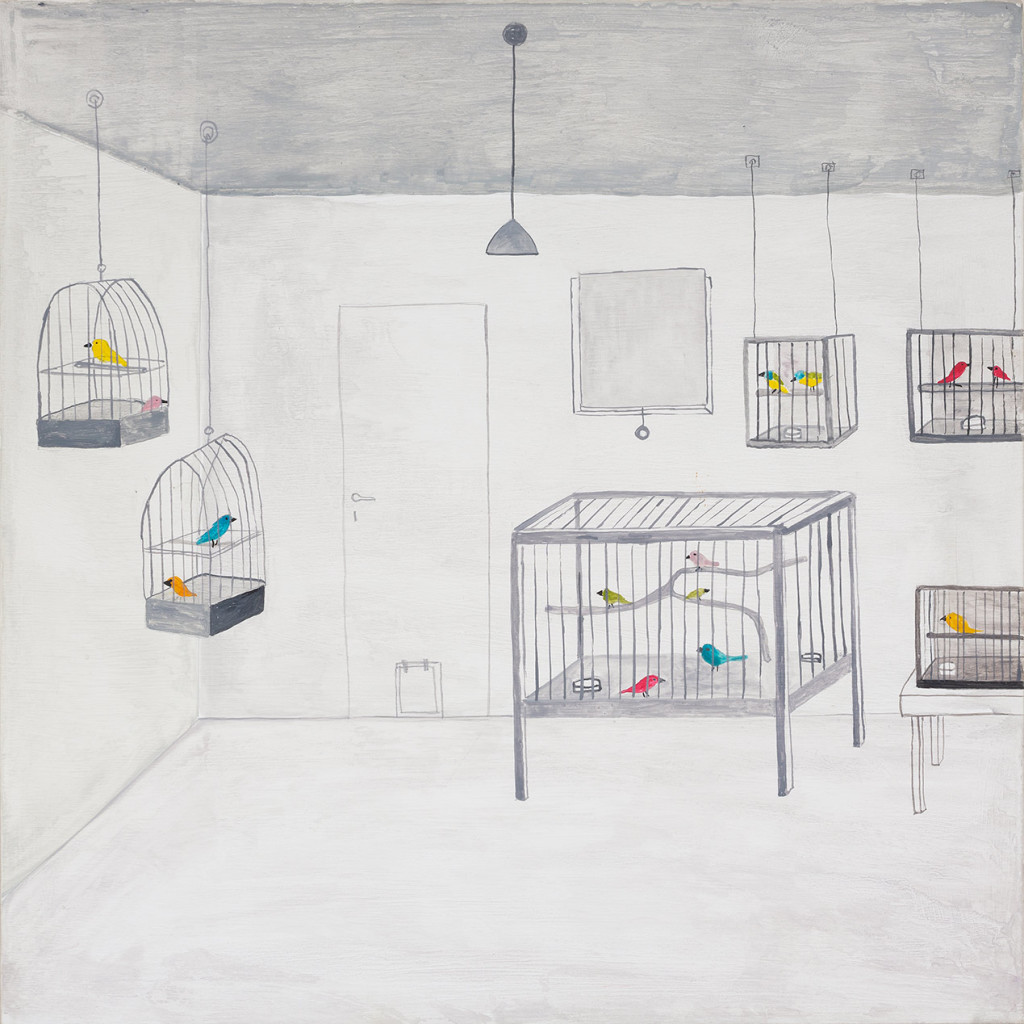 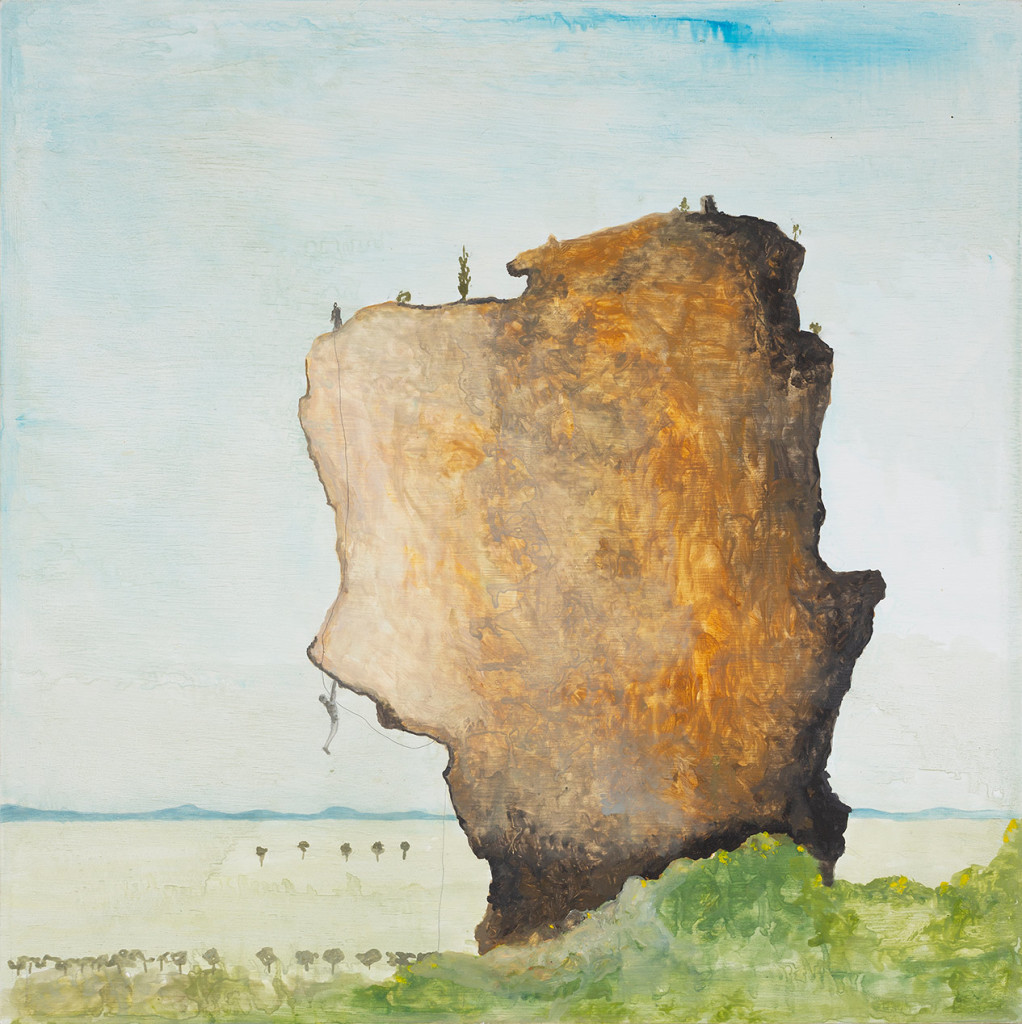 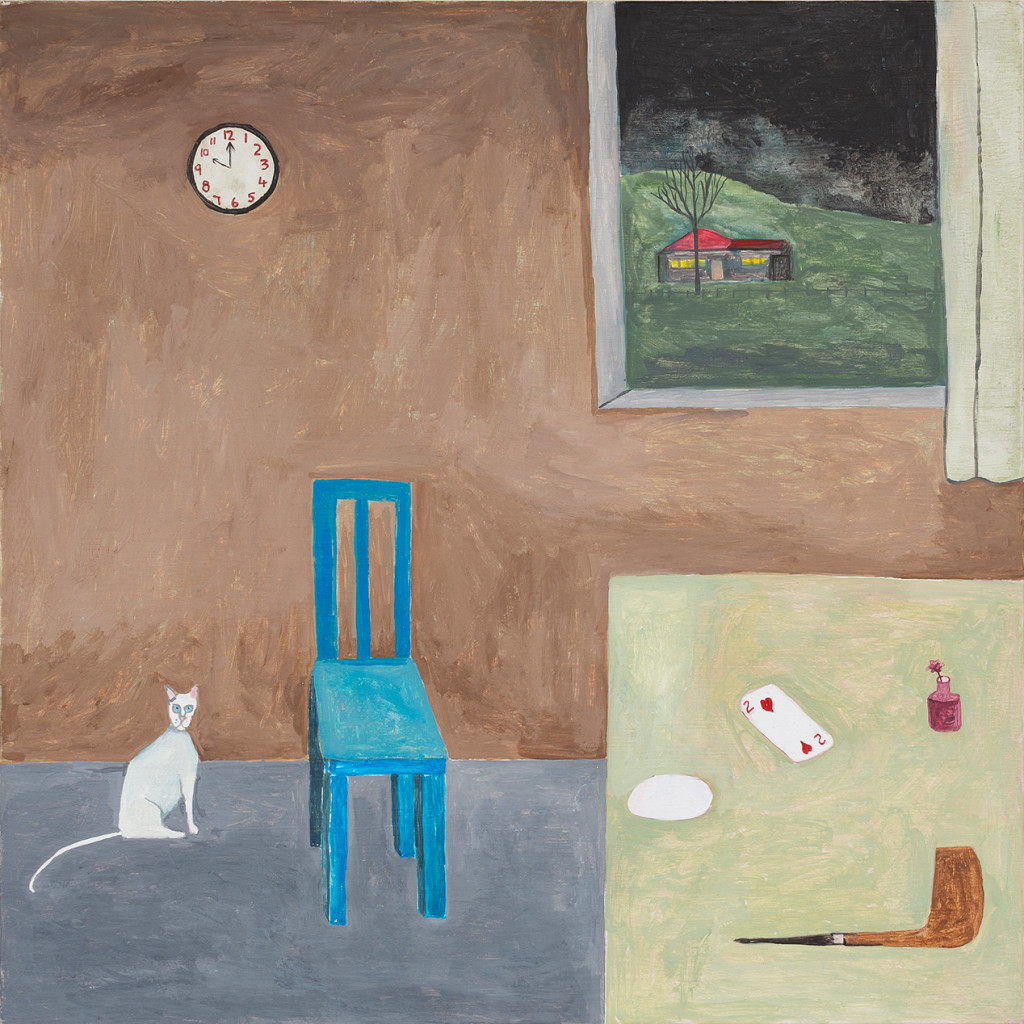 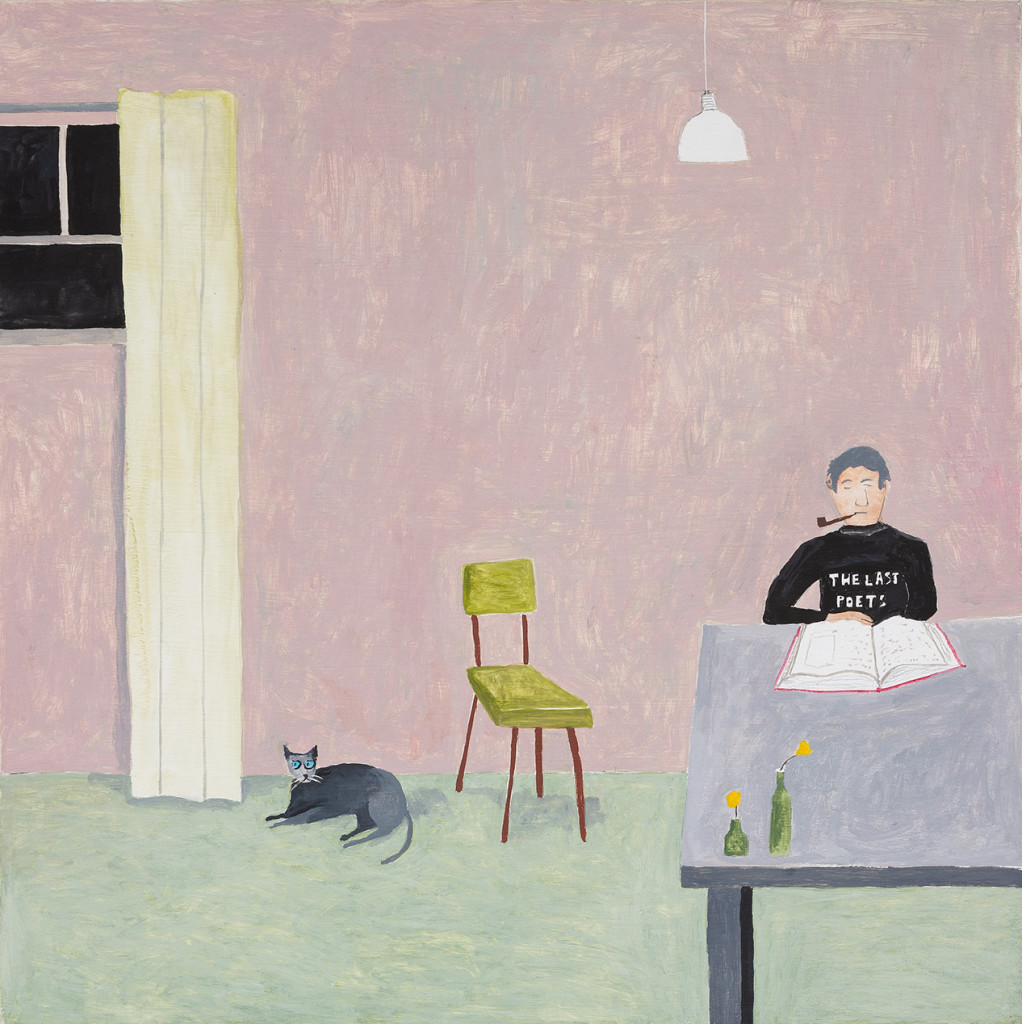 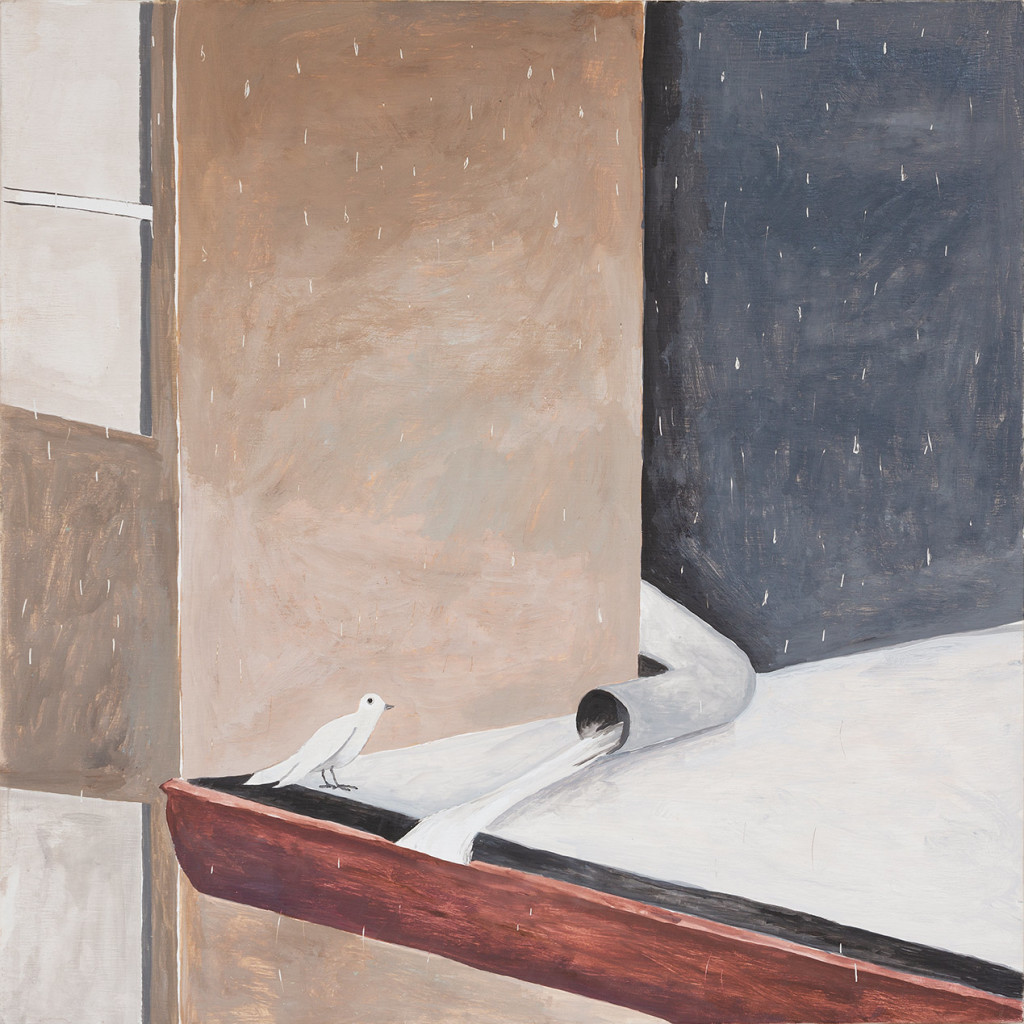 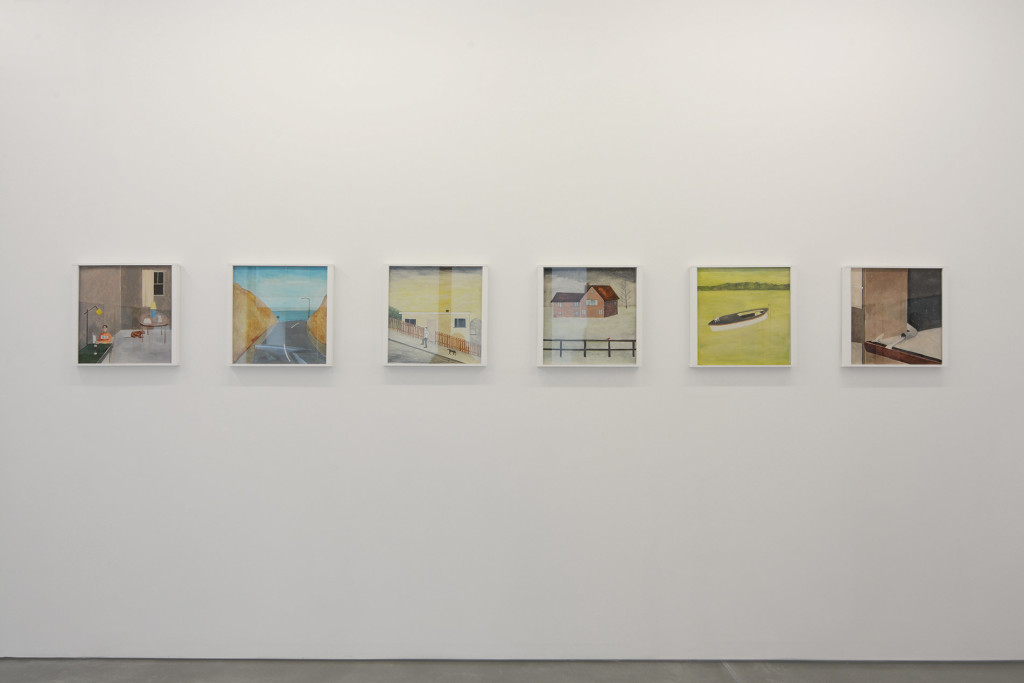