“Well, here’s another fine mess” (Stan says to Ollie). The problem, of temporal placement (self-defeating-garden-variety), with having gotten carried away, by the moment, and written a slightly longer text (1,264 words) for Prudence Flint’s exhibition The Visit, for mother’s tankstation | Dublin[i] – way back before you could say the words “Global Pandemic” every other day – is that it impacts on the future…[ii] Potentially reducing what one might readily have to say in coming instances, such as this… This being, the first solo London showing of Prudence Flint at mother’s tankstation, Bethnal Green. Following Prudence’s penchant for linguistic brevity, the exhibition is enigmatically titled; The Call. Who or what calls, or calls upon, whom? Such details are left pregnantly blank, so I’m either travelling back in time or looking up the spirit phone directory, under Beckett, for possible future answers.

What to say? Oh well, dig deeper, dig newly. Newness good! But so is oldness, in the form of established informational groundwork, so please feel free to read, or read again, and take from the previous text what you will, to contribute to the accommodating maw[iii] of this one; if you are new to, or not-so-familiar with Prudence Flint’s extraordinary domain, every little helps unlock her ecosphere.

Last time of writing, we had not met Prudence Flint, other than through her work in reproduction, through long-distance Skype conversations – remember those – and/or published interviews. Now we have, as she made what presently seems like the epic journey alongside her paintings (remember travel, remember 20+ hours in a steel can) from their native Melbourne, to Dublin, to attend her remarkable inaugural show. This time she cannot, as Australia is effectively still closed and Melbourne remains subject to strict and regular lockdowns. Skypes have become Zooms, or WhatsApp chats, as over a long and isolated year she slowly made us five new, reflexively separated, splendidly secluded, temporally slowed, paintings: The Call, The Leaving, The Holiday, The New Song, The Lost. In four out five works, a beautifully rendered sole sequestered woman sits on the bed of a minimal interior, a studio apartment, a windowless Auster-like room[iv] (?), surrounded by flattened, sharply perspectival space and few objects. The merest hint of doorways (?) in the top right hand corner of each ‘room’.

All/any supposable explanatory theories of temporal applicability in Flint’s paintings are probably/possibly as equally true as false. And if assessments of either, for veracity or significance, are established from data gathering exercises, or the analysis of such modes of organisation, then let’s catalogue. In five given scenarios; Something may just have happened (projected historical)…Something may be about to happen (predictive future)…Nothing at all is happening (present negational)…Nothing will happen (future prophetic)…Nothing may ever happen (future speculative)…Nothing is going to happen (predictive). Time sits still – perhaps contemplating how some past is more passed than other pasts. And, that at certain points, in certain points of the past, that the more recent past, respectively, was the historical future, until it was also the past. To suggest that time stands still in ‘Flint’, seems way too nounishly active for the passivity of what’s apparently not going on, other than within the implied space – the temporal mechanics – of Flint’s collective protagonists’ heads. We can only say that, at present, we do not know as yet, what might be the collective meaning or significance of these episodes, if we do, given other knowledge that we do not yet possess, we might, in the historical future have to revise our view, as the novel is not yet complete. The whole history, told as a selective story – stories must necessarily be selective – is merely a fragment of an impossibly complete history, otherwise there is an uncomfortable inference of a ‘Divine’ plan and Flint is way too agnostically pragmatic for such.

A stick, punishment rod, hazel switch (?), teachers’ pointer (?), appears in the four interiors, on the bed beside the protagonist, or lurking on the floor. Poised, waiting, slightly threatening. A segment of watermelon – sans seeds, a recurring sort-of detached Punch & Judy head, I don’t know what that thing is, on a plinth-like, bedside table in The Holiday. Maybe a fruit, fancy cake confection, fruit cake perhaps, panic button, hand exercise ball (most probable), or a very early Anish Kapoor sculpture?[v] Nor does the painting look like the ‘holiday’ is going particularly well; the woman’s face buried in her hands, there’s that rod again. Pink laced-up shoes and patterned socks. Orange pleated skirt. Cami. As noted, just a suggestion of an open door in the top right corner. The New Song, has the most exquisitely tactile, fluffy mohair cardigan, draped over the back of a rather severe school-type chair, with a seashell on top of a book on the seat. Book closed. An oval mirror (there’s a name for that sort of mirror, but I’ve forgotten it – Cheval?), standing at ‘the head’ of the bed, and positioned at such an oblique angle that we cannot properly see the thing definitely reflected in it. The perspective is so acute that the woman’s head is also super far away. As light relief (pun intended) here is however, the slightest trace of pale sun filtering in through an unseen window, though the corresponding angle of the shadow cast by the body, onto the bed, doesn’t play ball. Nature is not in accord with human life. Perhaps the window is an artificial ‘gobo’ projection, a trick, an illusion. Hello again Mr. Auster[vi]. Black shoes with white soles and laces, same orange pleated skirt and Cami though. No socks this time.

The Leaving, has the most extensive catalogue of objects; a guitar faced to the wall, like it has just misbehaved – which is unusual – I used to play, so it’s just not the way you would conventionally rest it. You just wouldn’t. A bedside table with ovoid alarm clock, showing 11:00. The lighting would suggest of the AM. But… we are on Flint time…  A green carpet off-sets the lime green fluorescent socks and throws forward the red of the slice of watermelon – once again sans seeds, just falling into shadow. Shadow source; uncertain. An eerie pink light comes through the open doorway (?) at the top right of this particular painting, same place as all of the others (?), but this time the door has been hung the other way around. Ambidextrous doors? There is what I first thought looked like a romance novel on the bed, it turns out, however, to be a painted rendering of a favourite photograph of the artist’s late mother at a young age – it is romantic. Beside it? A brown notebook probably? Subject’s hands passively resting on knees. Just like the same figure almost, but not quite, repeated in The Lost. But outdoors…

In the meantime, through remote chats, we have learnt that when Prudence was allowed, by Victorian COVID restrictions, to host and paint directly from live models, that she has regulars, favourites, friends, we now know their names and can now recognise them through distinctive clothing choices – the luminous green socks are a real thing (the dressing choices of the person arriving at the studio is allowed to influence the painting) – or postures, physiques, height, hair length, styles. Invaluable info that affects the understanding of Flint logic. Flogic.

The fifth painting, The Lost, has three figures situated in one of Flint’s characteristically stylised ‘exteriors’ (the difference indicated by what exactly?); the sparse Hills Hoist-type[vii] ‘tree’ mounted atop some strange pastel Battenberg dais? (The edges are harder than Flint’s mattresses) but it forms, presents, a bit like a big communal Flint-type bed, angled and perspectively rendered in roughly the same approximate way as to those in her ‘interiors? So what makes it outside? The ‘tree’ is little stranger than some of her other objects? However… It becomes an axis, a spindle around which simple activities orbit; face washing in a plastic basin, sitting, lying. Again we recognise the individuals from their attire or appearance. New friends. There’s those green socks again – with distinctive footwear choices – we are outdoors afterall. – the matching coral underwear set (…what was I saying about being outdoors?) has migrated from both The Call and The Leaving. It has a very particular strapping detail across the décolletage. Old fashioned? Danto says there’s no such thing as the future, just the forward accumulation of the past[viii]. Oops, I’ve done it again – there’s no learning from history[ix].

[ii] Complex. There’s no such thing as the predictable future, gleaned from a complete understanding of the past, according to Arthur C. Danto, despite the fact that this footnote predicts the Danto entry (see below), which might suggest otherwise. Temporality is a b****! I’m simplifying a beautifully complex argument, exemplified by his deconstruction of the popular platitude of; I wish I’d known then what I know now. Page 24-25. For another time…

[iii] An old favourite… The late analytical philosopher and critic Arthur C. Danto, argues for and against, in his 1965 masterwork Analytical Philosophy of History, Cambridge University Press, 1965, (admittedly a niche master work of meta-logical argument), that there is no such thing as the future, as it is irrevocably unknown, rather there is simply a “forward lengthening of the past…” (oldness+)… “Let the past be considered a great sort of container, a bin in which are located, in the order of occurrence, all the events that have ever happened. It is a container which grows moment by moment longer in the forward direction, and moment by moment fuller as layer upon layer of events enter its fluid, accommodating maw.” Page 146.
[iv] See Paul Auster; ‘The Locked Room’, in The New York Trilogy, 1985/6 (first published in one volume; Penguin Books, 1990.
[v] I’m talking early 1980’s early! First Lisson Gallery show. The sort with fresh powdered pigment dropped over them.

[vi] “It seemed, however that little by little the darkness had begun to win out over the light, that whereas in the beginning there had been a predominance of sunshine, the light had gradually become fainter and more fleeting.” Ibid, no.iv. City of Glass, pg.155
[vii] Hills Hoist… An outdoor Australian ‘institution’. 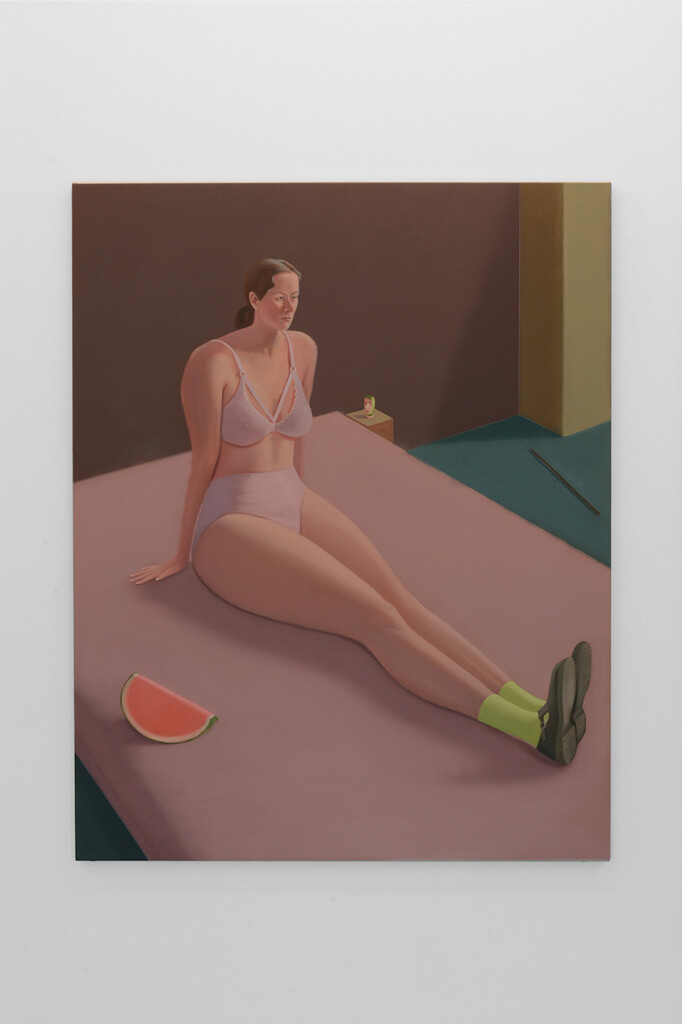 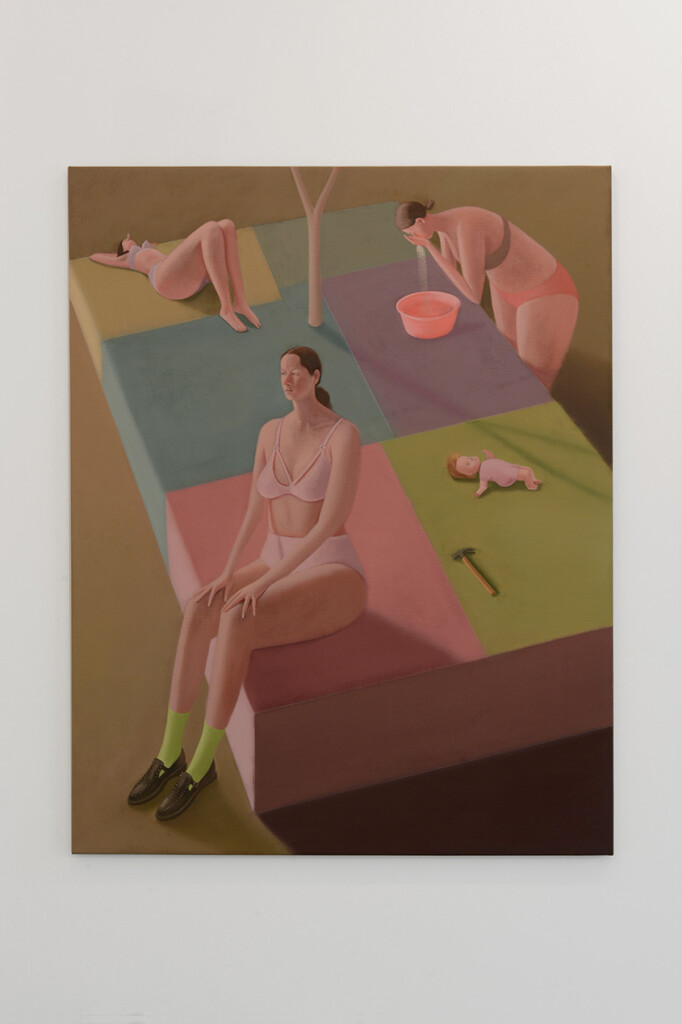 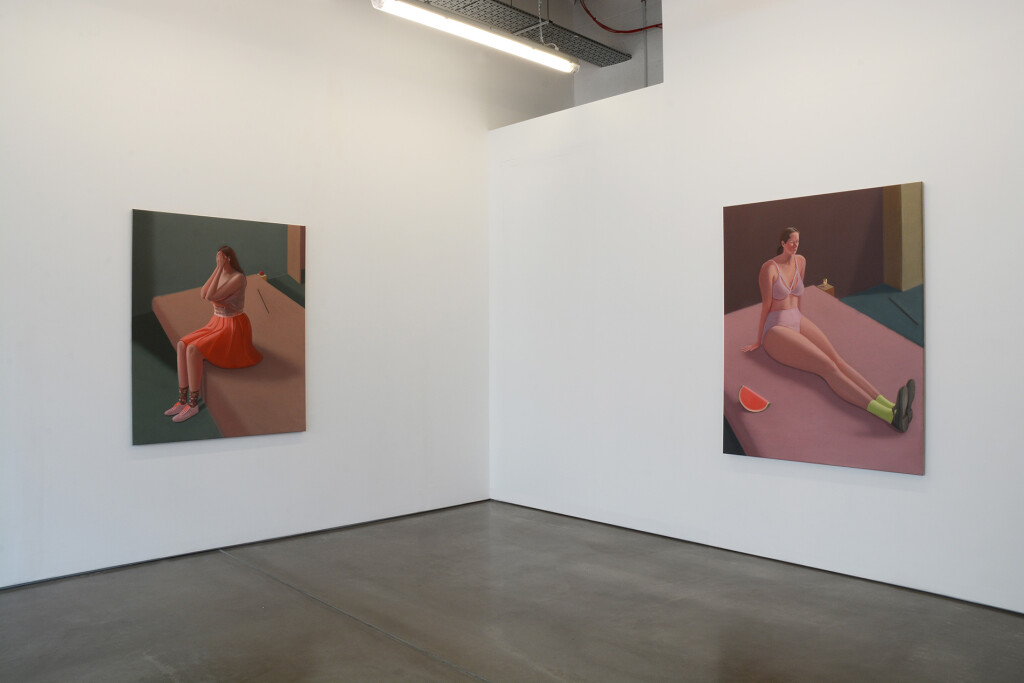 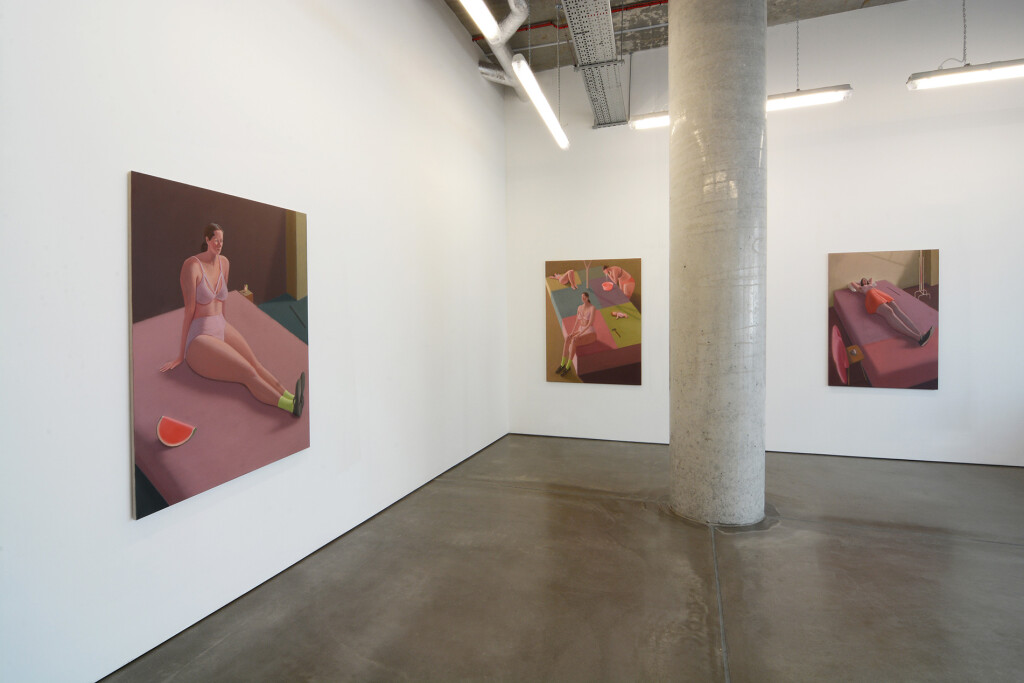 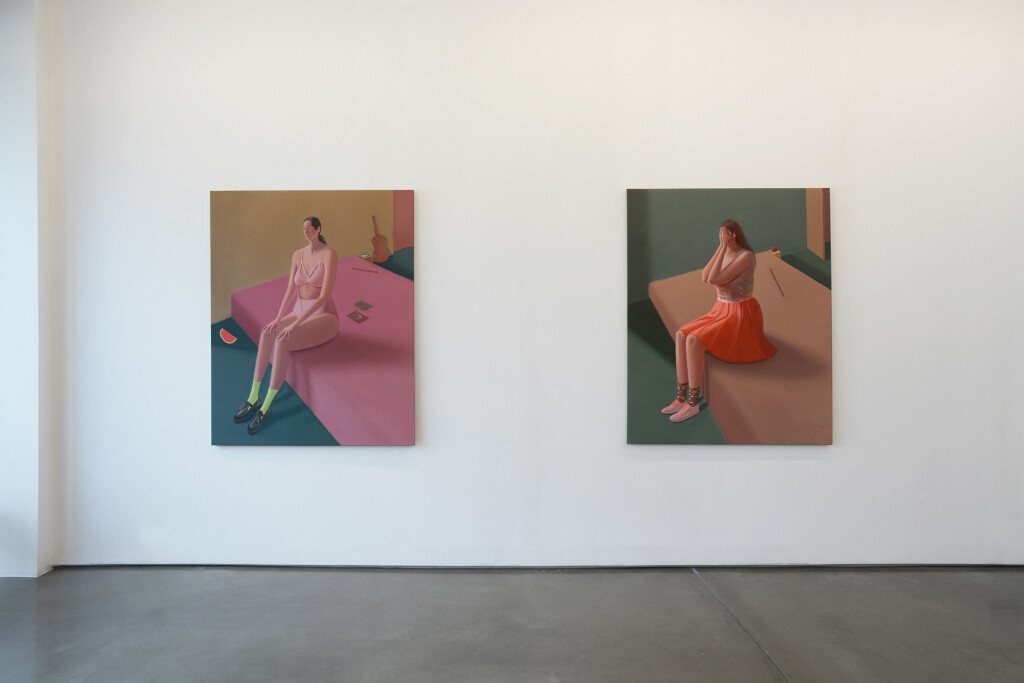 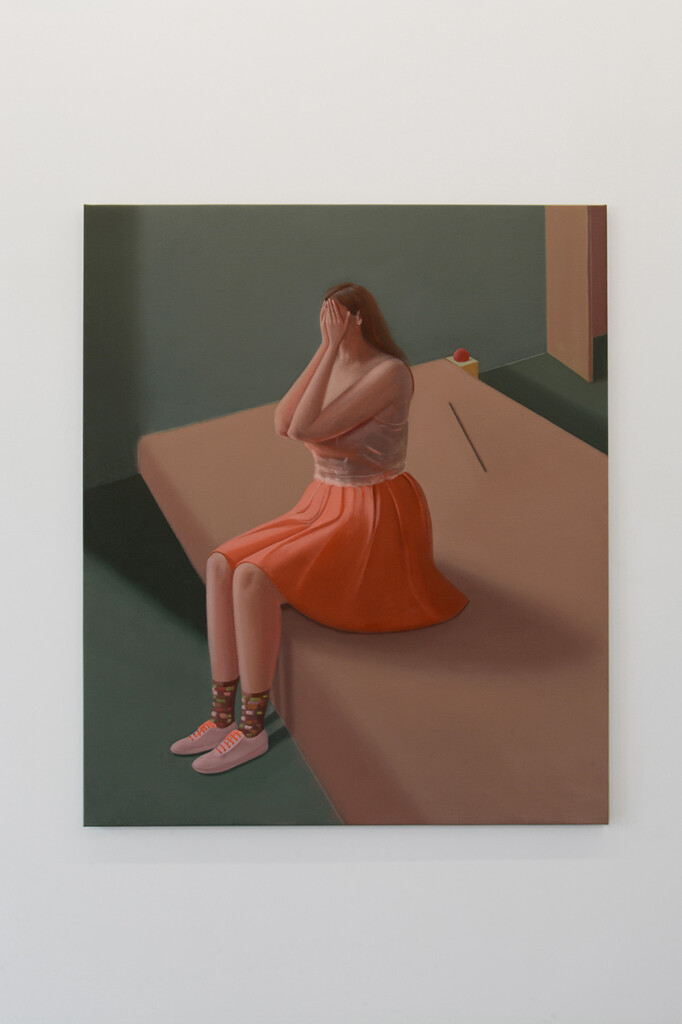 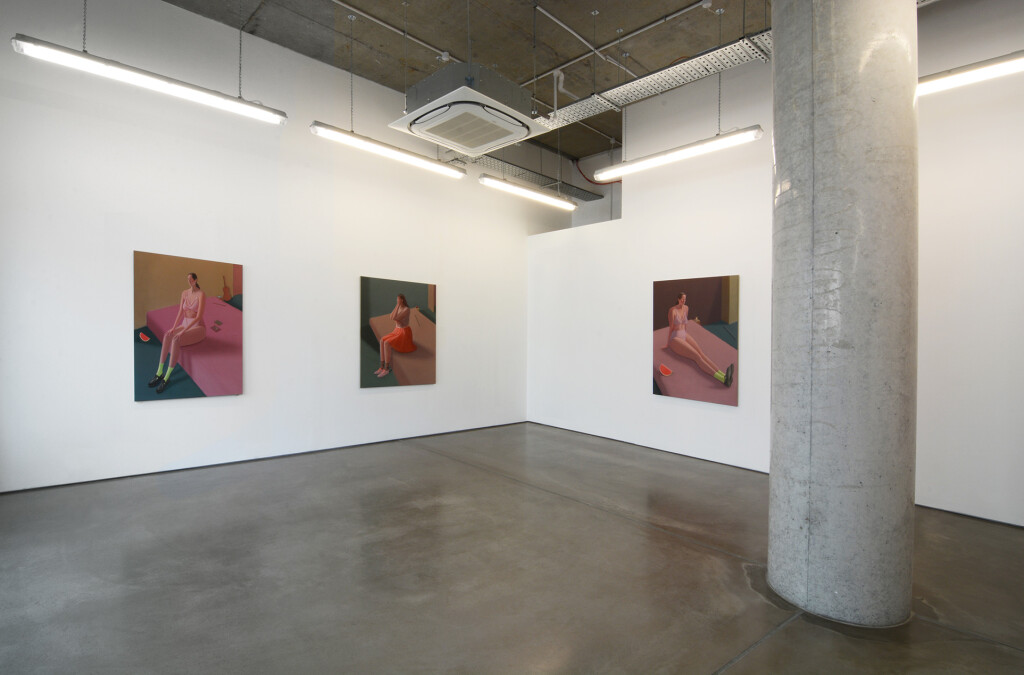 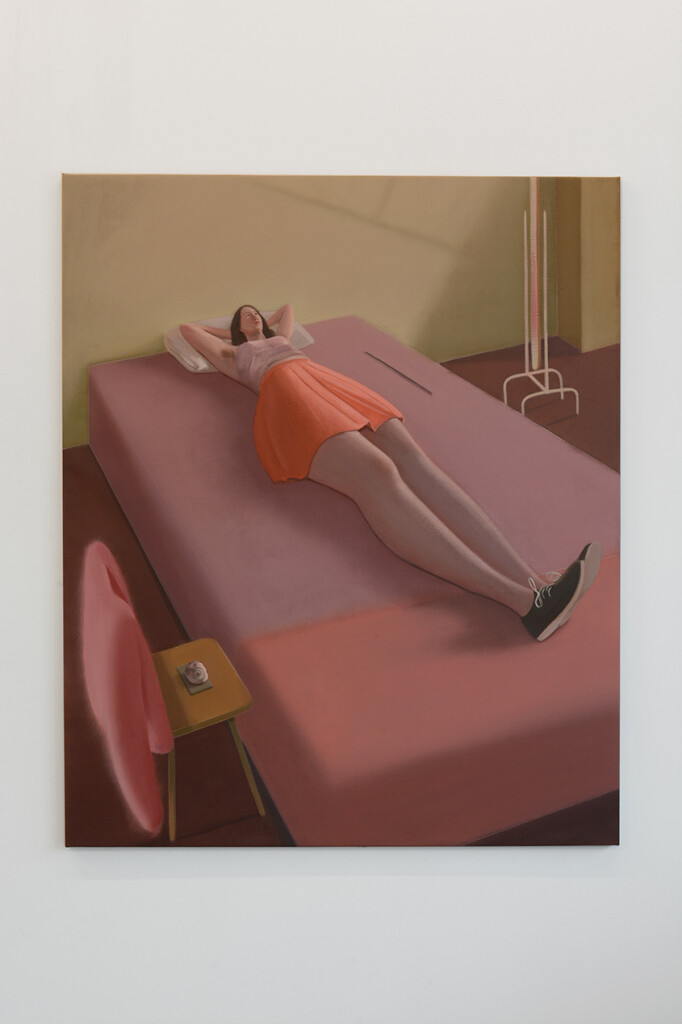 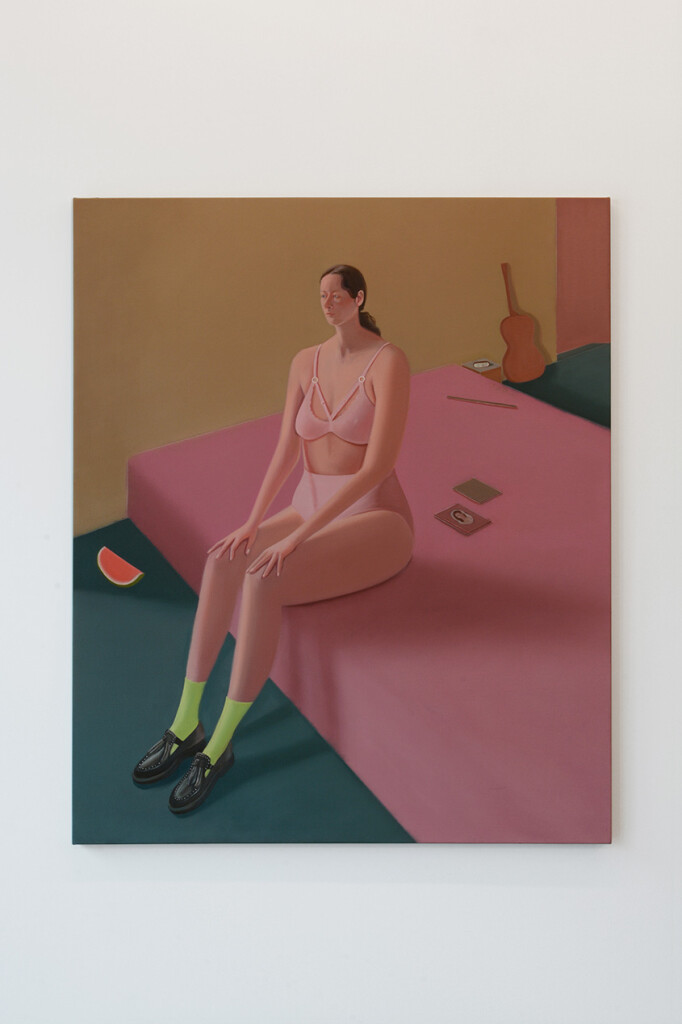 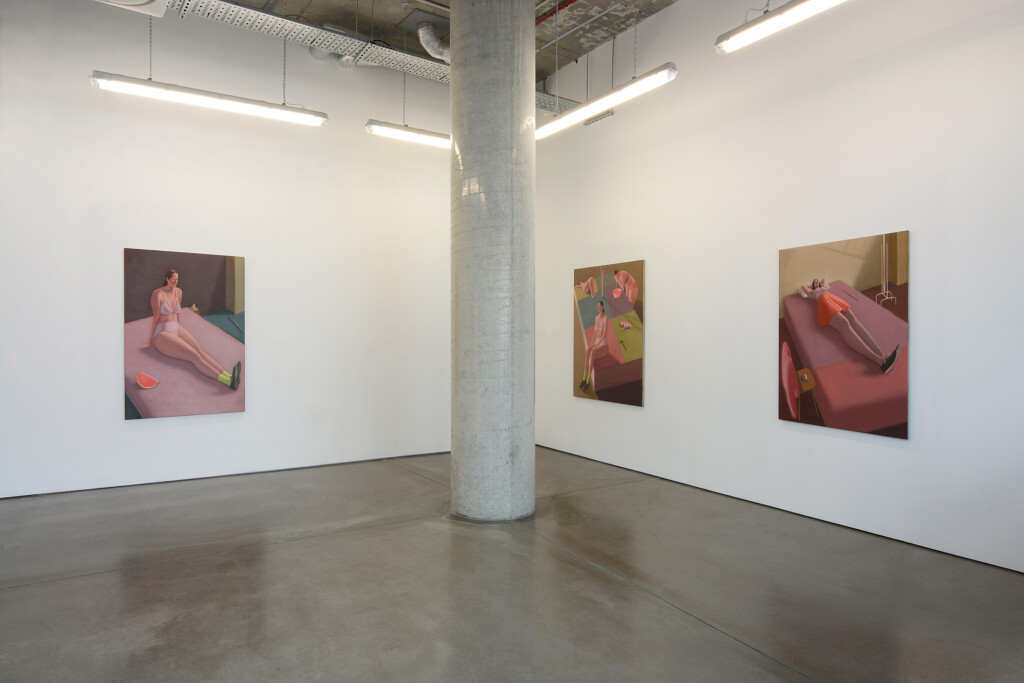 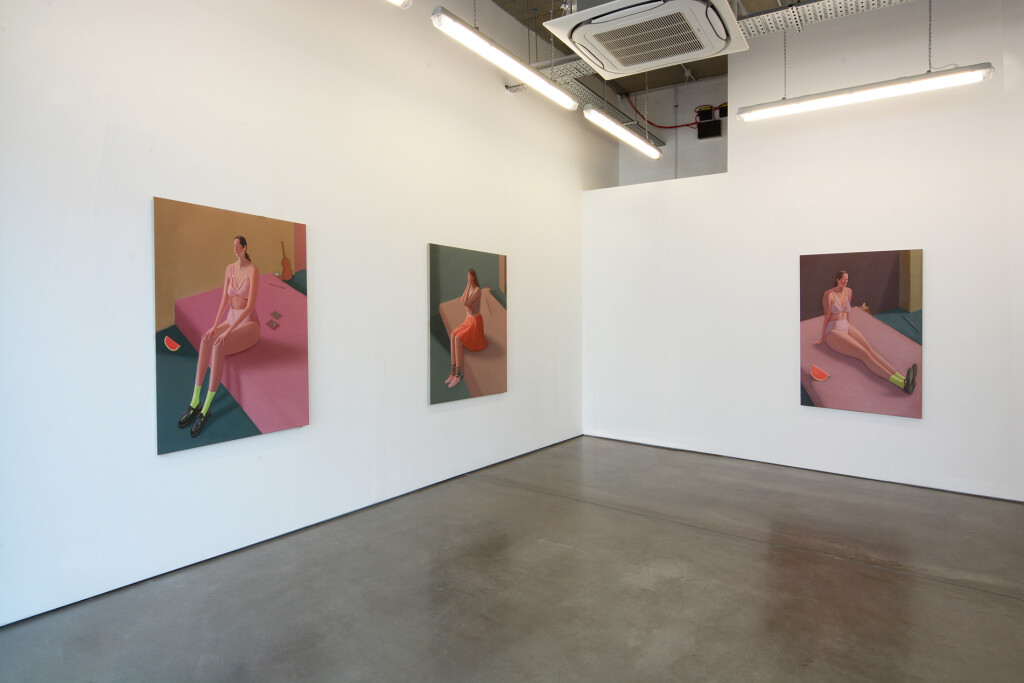