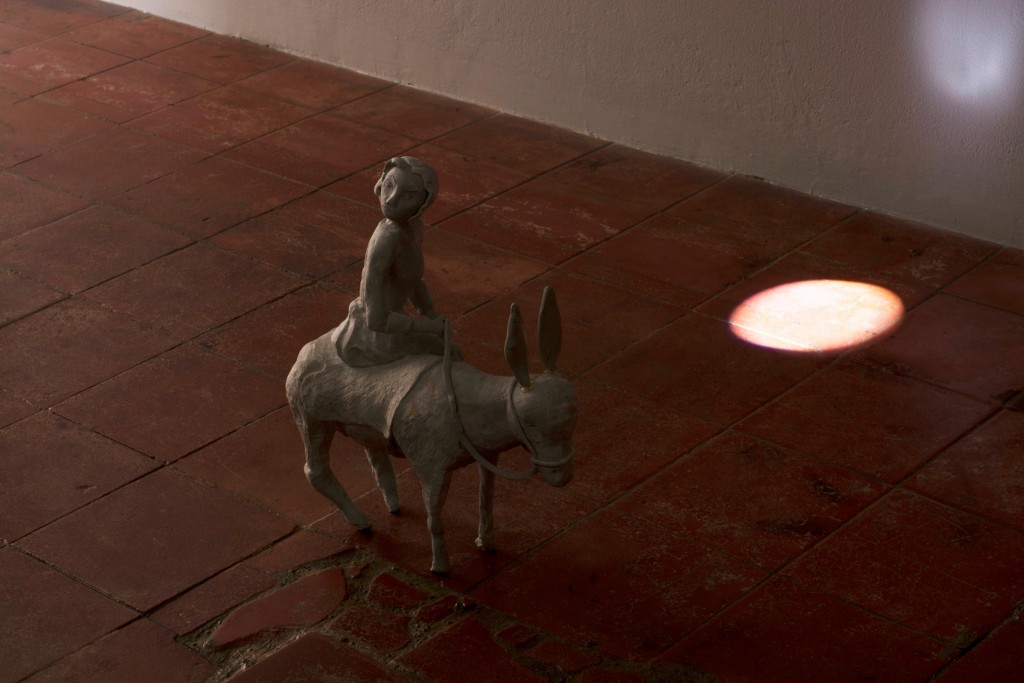 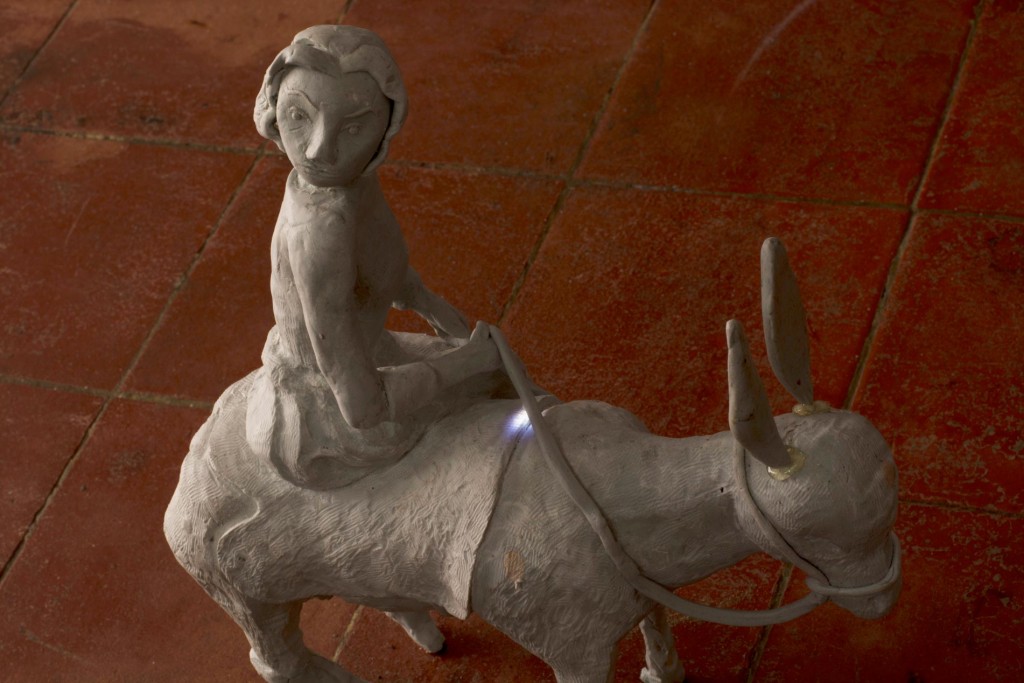 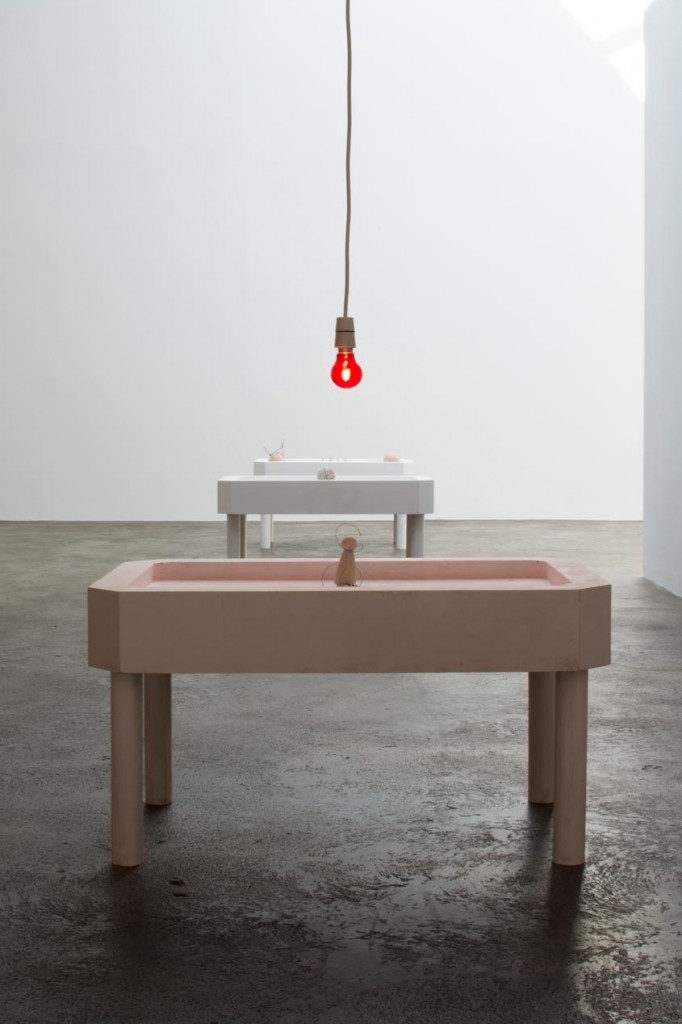 The New York based artist, Sam Anderson, is sincerely a product of a Los Angeles/Hollywood film and TV culture, wherein lens-based, macro-envisaging (boom-arm realities – if you like), fantastically liberates ontological things from all restrictive obligations of dimension. In what Arthur Eddington described as dream instruments1, hyper-attention becomes an enlarging glass, where detail increases an object’s stature and releases oneiric powers of amplification. But this is a door that opens only if the (enfant2) viewer has a willingness to find freedom through and beyond the threshold of absurdity: where windmills are giants, rightly to be tilted at and hardened-lifers escape their cells on scribbled wall-drawings of comically smoke-puffed trains.

In ‘Talley’s Folly’, Sam Anderson’s first solo show for mother’s tankstation, her re-appropriation of the gallery space is inhabited by clay, female figures, with donkeys, adjusted lighting and series of games tables (billiards, pool, snooker?), which sport some, but far from all of the requisite features of their “being-in-the-world”3 counter-parts; playing surfaces, ornate, fat little legs, balls, cockroaches (?), sort-of, and not necessarily in the places, states, purposes or at the relative scales that ontology might prescribe: “…the details are there but the story is changed, or maybe useless…some table-tops carry things more akin to landscape. One contains sand (and possibly a figure)”4. There appears to be a small planet marooned on another. On a third, ships pass in the night. The objects that ‘daydream’5 are Medievalesque in their proportion, placement and significance where the emotive, associative abstractions of frequency of use, need, the pleasure-to-hand and whim-as-primacy have greater determination in placement and size than the limitations of phenomenology. Anderson’s doorway is ajar, reach through, touch a planet (well, don’t, please – imagine touching…the wetness of its oceans, the chill of its peaks). Gaston Bachelard argues that; “In the presence of an image that dreams, it must be taken as an invitation to continue the daydream that created it.”6. He describes a fable, where a man climbs into a fairy’s carriage the size of a bean. On his back he carries six ‘litrons’ of beans, an arcane measure equivalent to six thousand beans. Not only is there a contradiction of size but a contradiction of numbers. The world is getting smaller: six thousand = one.7

If the term miniature is restrictive, then ‘fable’ is its positive counterbalance, through its enlarging lens the world gets bigger, not smaller: one = six thousand. Fables, the most enduring form in folklore are succinct narratives that switch-out ontological roles, handing over human primacy to animals, plants, mythical creatures, inanimate objects and/or forces of nature…which are graced with both language and attitude: donkeys talk (usually in riddles), a cat balances a flood-born cradle by continually jumping from side-to-side, end-to-end. Questions are posed of the inherency of a maternal instinct to protect the infant or display merely a sense of self-preservation. Selfless or selfish, balance, imbalance?8

Sam Anderson’s pre-occupation with the equivalent (equivocating) form of the fable and the literary genre of Fantasy foregrounds a world with no right or wrong, in terms of both scale and/or object/moral relationships. The only is, is the self-coherent, self-accomplishing, post-ideated, abstract regulation of the ‘appropriate-to-purpose’: where the imagination is, nor cannot ever be, wrong. Its central logic and purpose (its very point) is that it never has to confront objective reality. A = B. Science, go **** yourself. Don Quixote does not have to actually meet Dulcinea to know that she is the most ideally beautiful of women, a princess under an enchantment. This is cemented by the anti-event of Cervantes not actually having her show up in the pages of the novel, she only need live, perfectly, in the perfection of invention. Similarly, Rocinante and Dapple are noble steeds, not a barnyard nag and a world-weary Donkey respectively. B = C. Tangentially (and we like a tangent), Anderson notes: “…I think I like donkey because they are most always perceived as docile, lesser horses. Broken-in, tired, sleepy, maybe drunk, weighed down, sturdy but also fragile…”9 Anderson’s exhibition title follows that of a “sturdy but also fragile” play by Landford Wilson, where a pair of lovers, Matt and Sally, try to settle their feelings for each other within their beautiful/fragile universe of a romantically dilapidated boathouse (bathos/pathos). The floor is so rotten that Matt falls through. With the detached determination of Rocinante, who simply wants to get on with her work, Sally mops-up Matt’s blood. Pathos balances bathos, the cat jumps sides.

In relation to anti-events, the literary theorist of Fantasy, Tzvetan Todorov, defines the fantastic as being any event that happens in our world that seems to be supernatural. Upon the occurrence of such, we must determine, decide, if the event was either an illusion or real and has actually taken place; event or anti-event? Upon choosing, Todorov suggests that we enter into the genres of uncanny and marvelous as if seeing ‘the event’ distantly from above10. Here Anderson flips, dumps us hard like WWE11 pro, back on the canvas of the real, suggesting an un-fantastical disjuncture of in-der-Welt-sein.

Ordinary inhabitants of the urban high-rise view point suddenly crowd-in on our rarefied, sublime peak; construction workers, maintenance crews, the buzzing of surveillance helicopters, uniformed security operatives, escaping criminals, roof-top smokers/tokers, high-rise sunbathers/nudists (out of step with health and safety), peeping-toms, snipers (out of step with morality), potential suicides (out of step with everything). All at once, unexpectedly, the rupture reveals our fantasy as bathetic delusion, poetry becomes prose, the fantastical height is liminal, chilly, a vertiginous spot high above the urban grid and scattered with dog-ends, from which there is a fucking great drop. Tiny things seem a long way down. One can only hope that the table-born planet (weighed down, sturdy but also fragile…) yielded a good harvest of beans, it may cushion the fall.

1 Arthur Eddington’s term, quoted in Patrick Meredith, Instruments of Communication – An Essay on Scientific Writing, Pergamon Press, London, 1966, pg 151. Ironically, Eddington is historically, perhaps, most noted for coining the hyperbole; “an army of monkeys with typewriters…”
2 In referrence to: “Qù les enfants regardent grand” (to where children see enlarged), Philippe de Boissy, Main première, pg 21 quoted in Bachelard, The Poetics of Space, pg 155
3 “Being-in-the-world” (in-der-Welt-sein) is Heidegger’s favoured replacement for terms such as subject, object, consciousness and world.
4 From an email of working notes from the artist.
5 See Bachelard (below)
6 Gaston Bachelard, The Poetics of Space, pg 149
7 One cannot help but wonder how equivalence was considered and expressed prior to Robert Recorde’s apparently simple but world changing invention (1557) of the equals sign, determining a notional demarcation of equation (balance). Subsequently, the symbol ‘=’ could be placed between two expressions of perfectly equal value, meaning they represent the same, proven mathematical object. One-and-the-same-thing: This = that, that = this.
8 The origins of the cat in the cradle fable are probably from Dutch folklore, potentially dating back as far as the great floods of 1421, but display complex sociological variations in their reading: from the not-unusual practice (of the time) of drowning of female children, to the anthropomorphic projection of the protective instinct of a mother cat, to mere survival instincts – the cat only survives by seeming to protect the child, to keep it calm and asleep, thus not adversely rocking the cradle and spilling all into the turbulent waters. If you haven’t noticed, cats hate water. Oddly, and with an equal irony to Eddington, who has historically shifted from the most popular, popularising philosopher of his day, to an aphorist, the fable of the cat and cradle seems imbedded in our contemporary lexicon courtesy of its loosely associative allusion in the 1974 Harry Chapin song, ‘Cats [sic] in the Cradle’ from his album Veritas and Balderdash.
“…and as I hung up the phone it occurred to me
he’d grown-up just like me, my boy was just like me…
and the cats in the cradle and the silver spoon
little boy blue and the man in the moon…”
9 ibid no 4
10 Tzvetan Todorov, Introduction à la littérature fantastique (1970), translated by Richard Howard, as The Fantastic: A Structural Approach to a Literary Genre, Cornell University Press, 1973. Paraphrased from too many pages to efficiently note.
11 I hate change!
When, unannounced – or not noticed – (and why) did the WWF, World Wrestling Federation, become WWE, World Wrestling Entertainment (!?). It’s better? Truer perhaps, but not better. Pathos pulls its own rug. Smackdown. 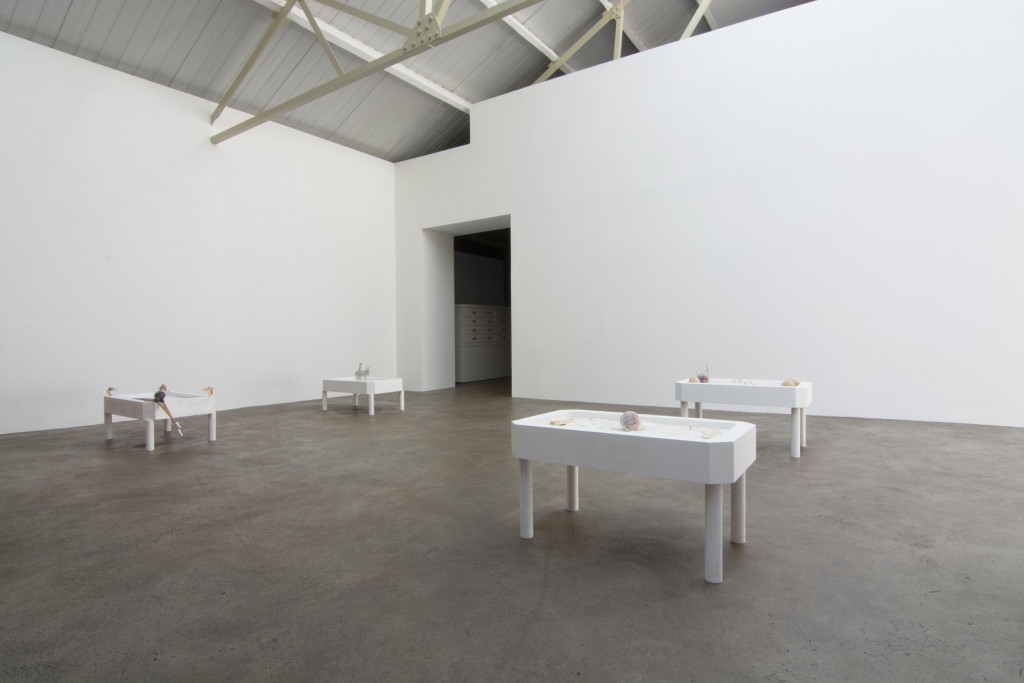 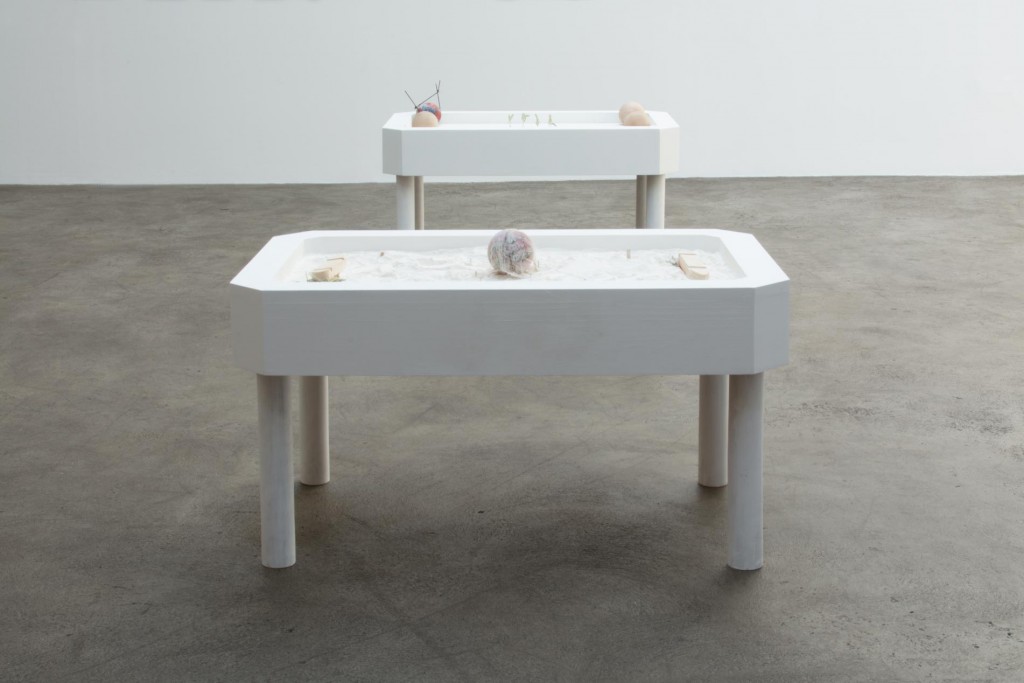 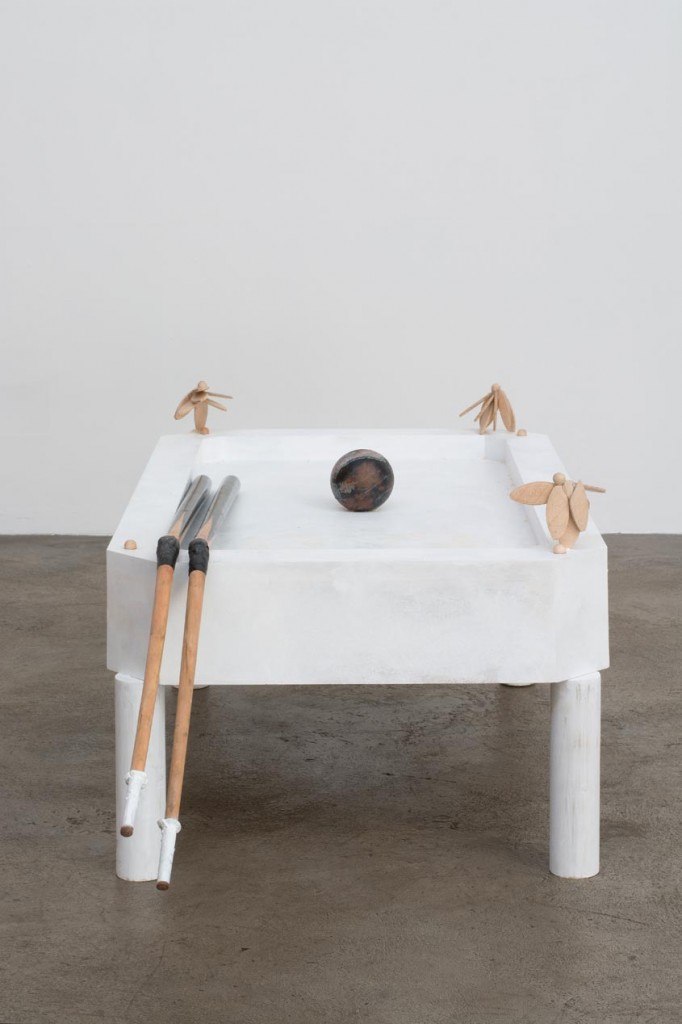 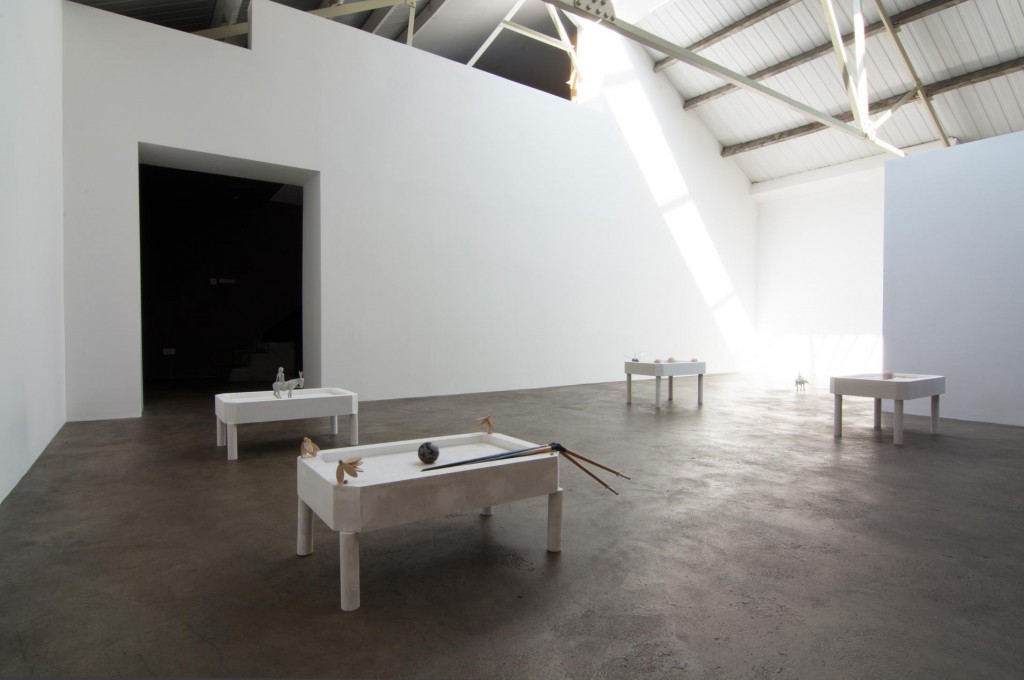 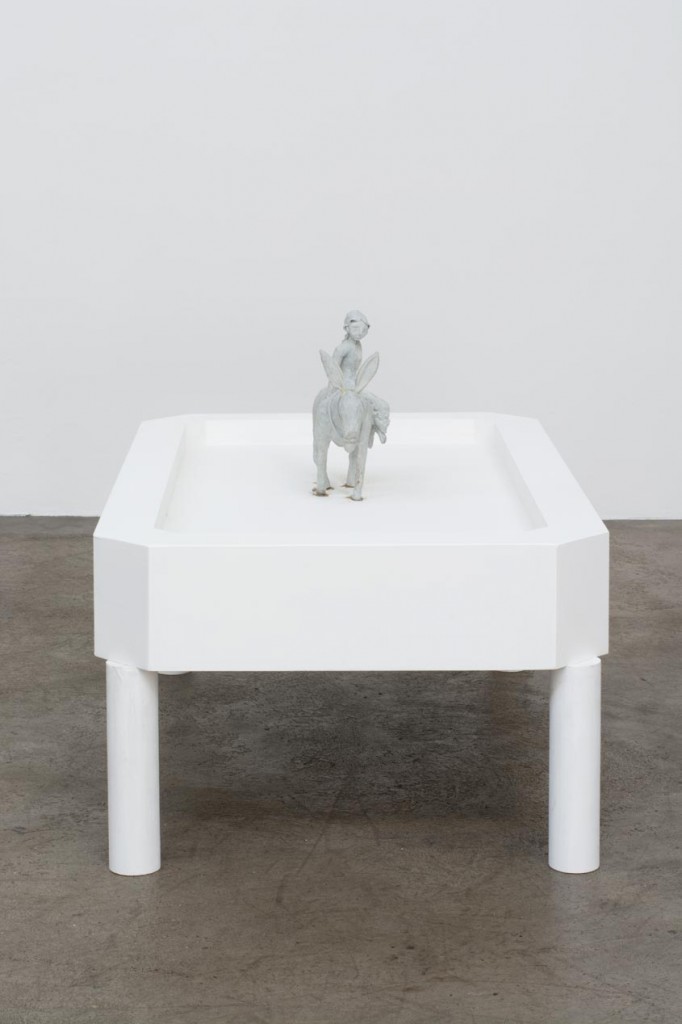 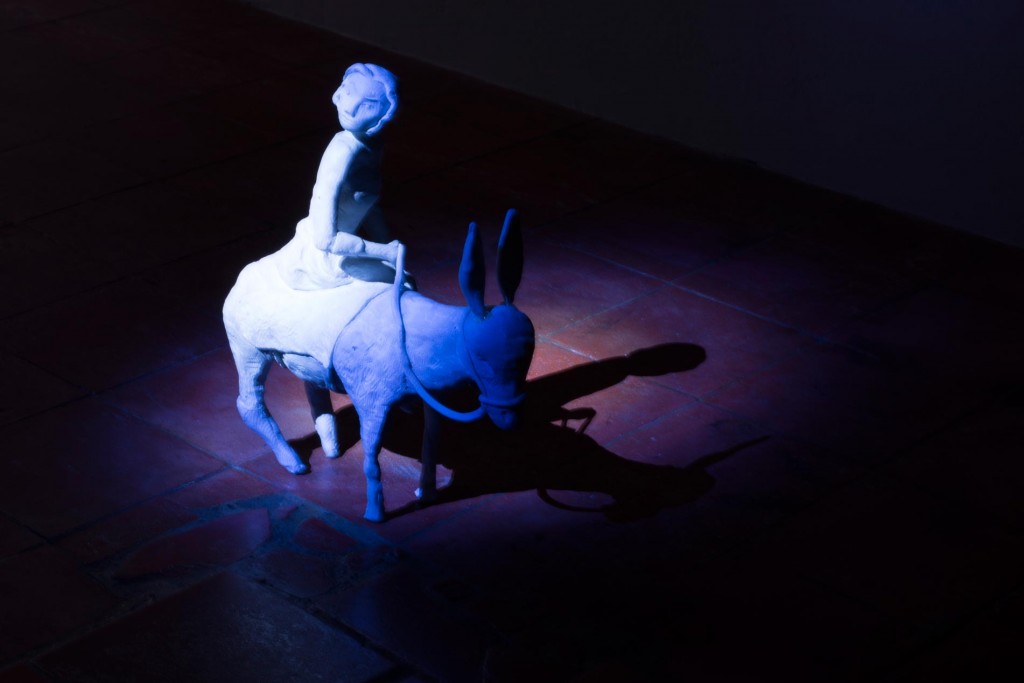 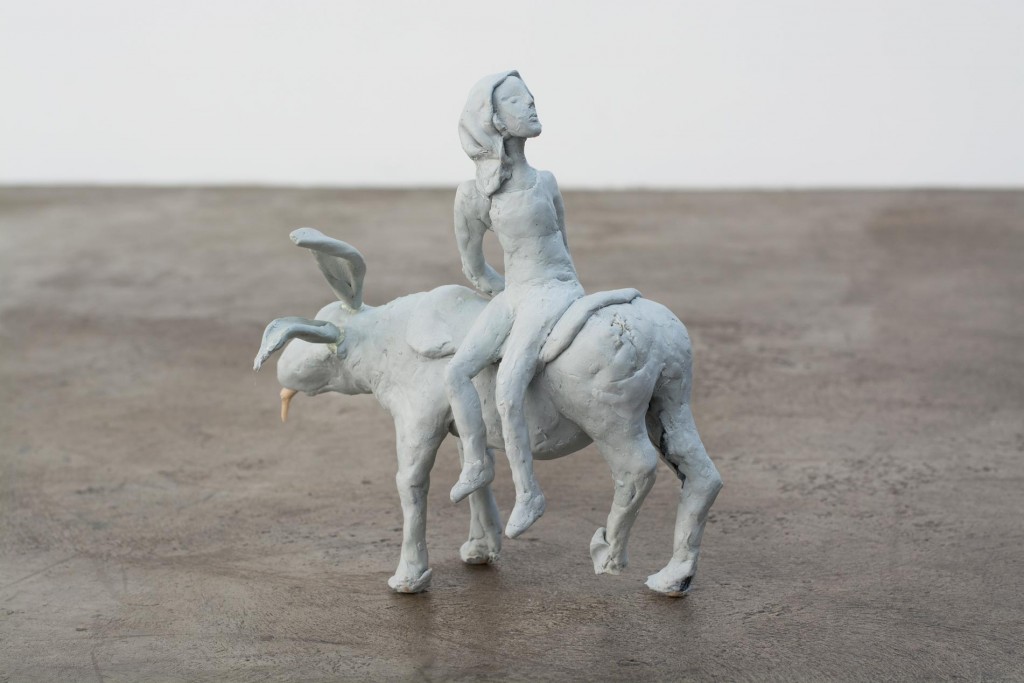 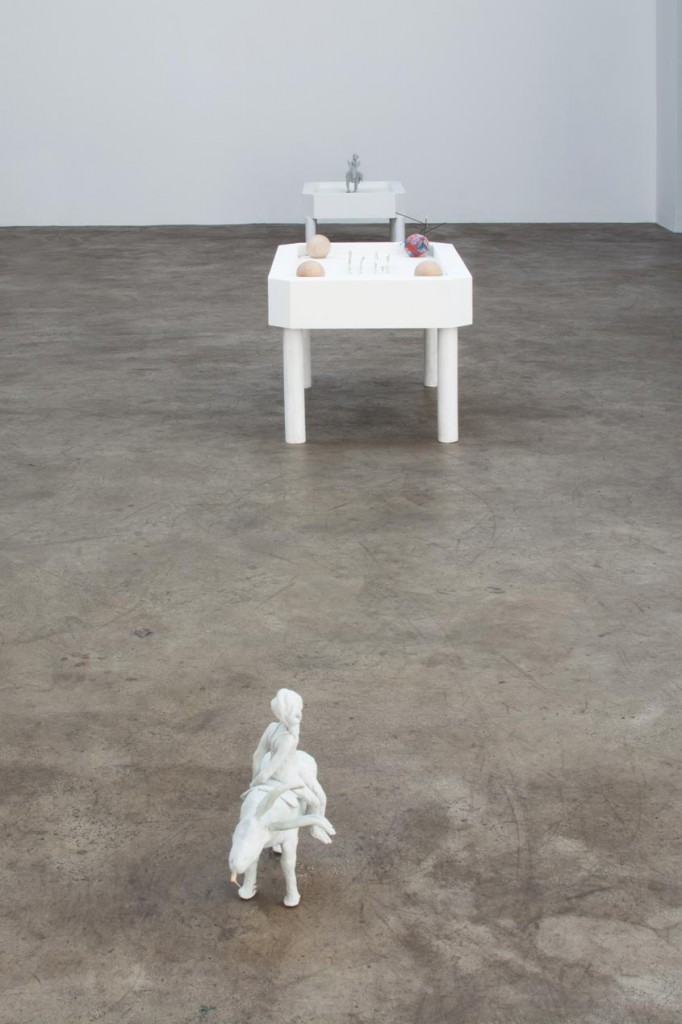 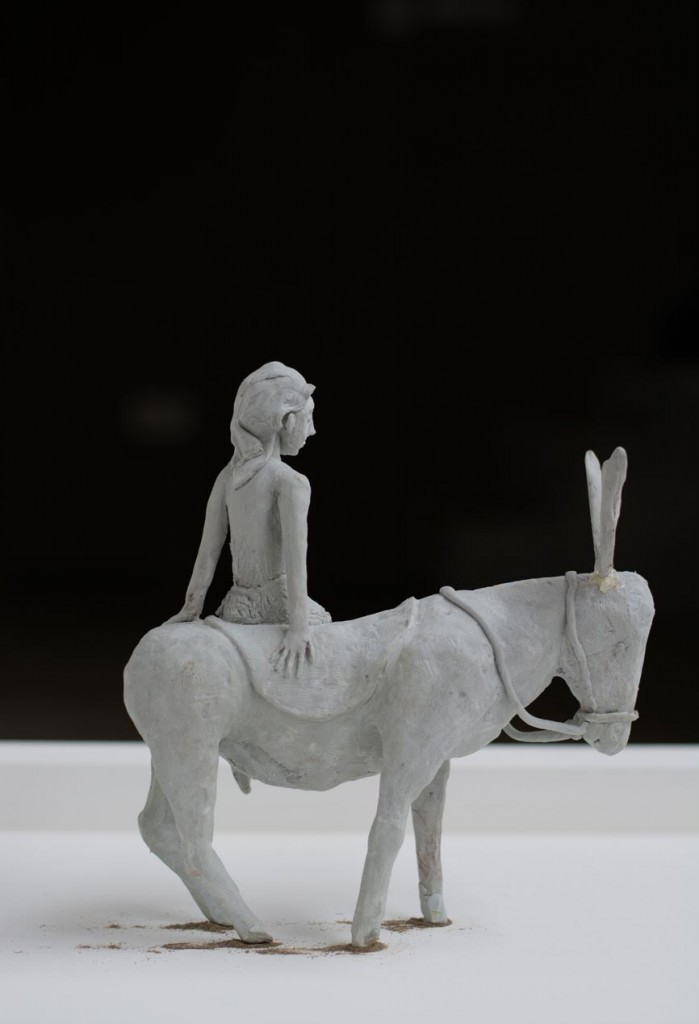 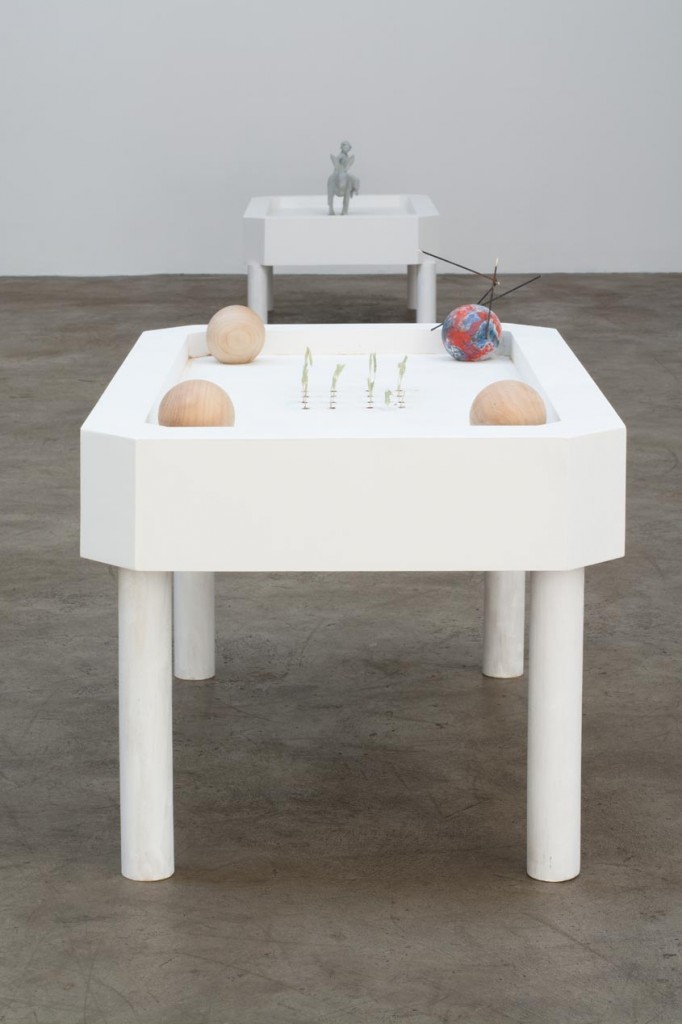 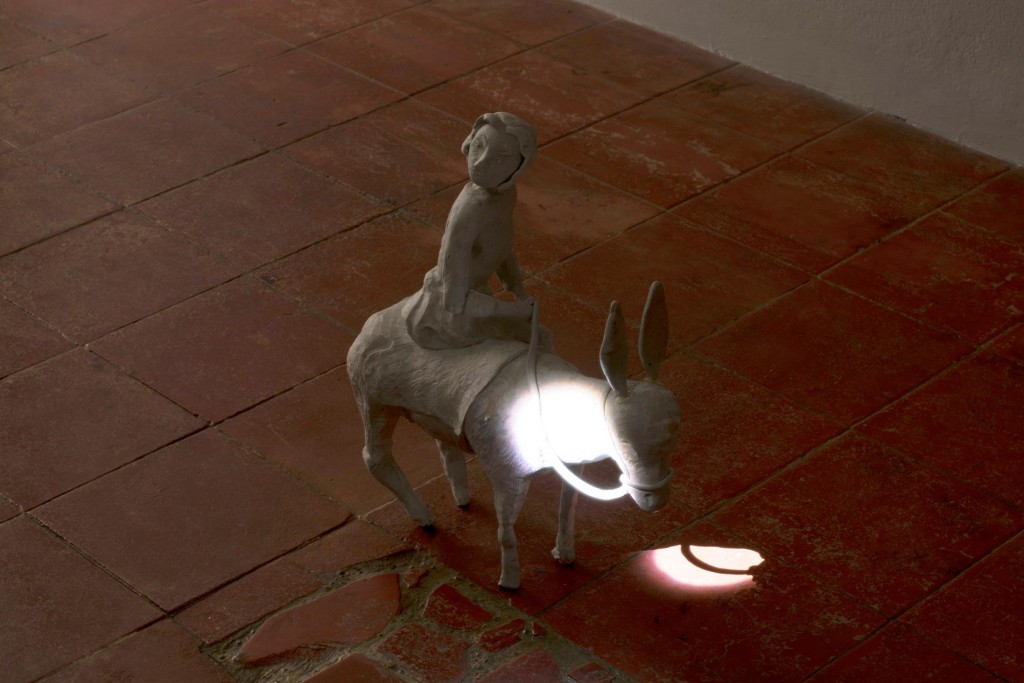 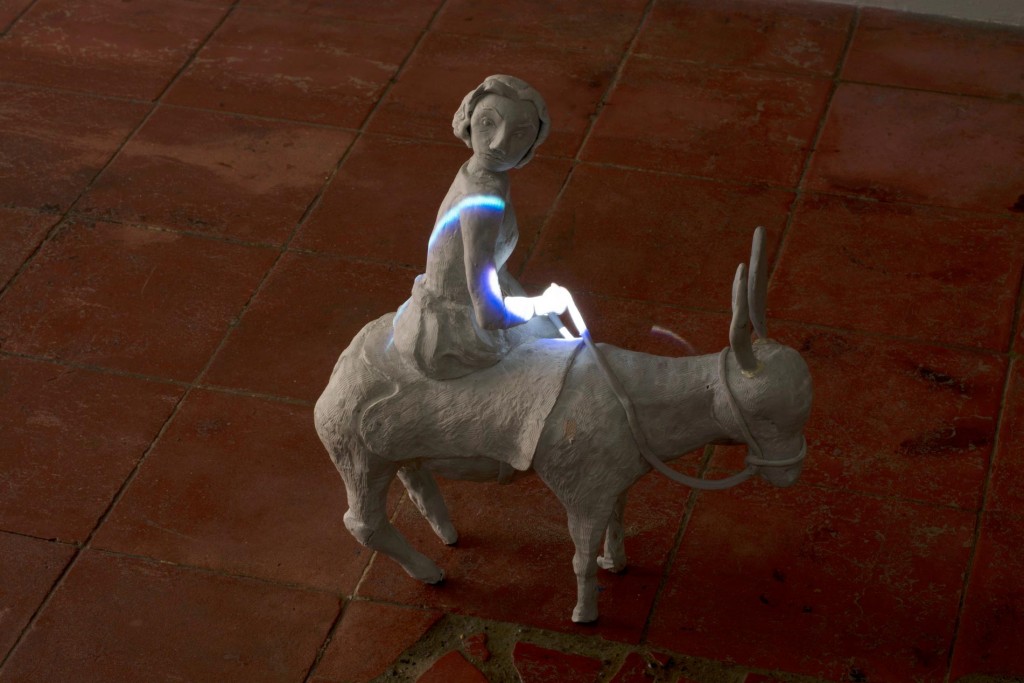 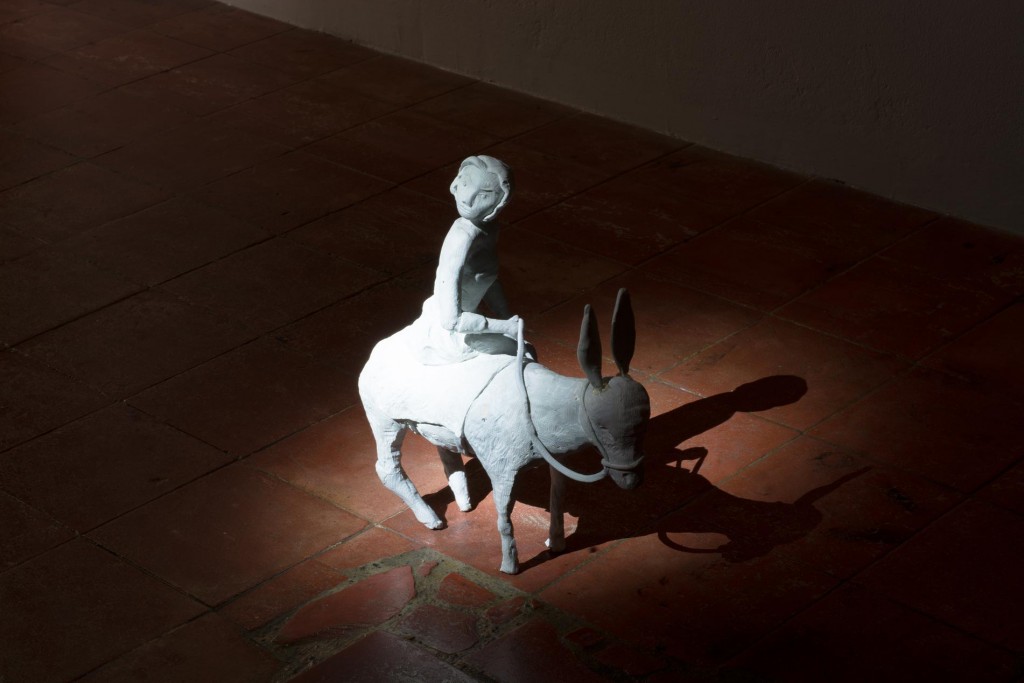 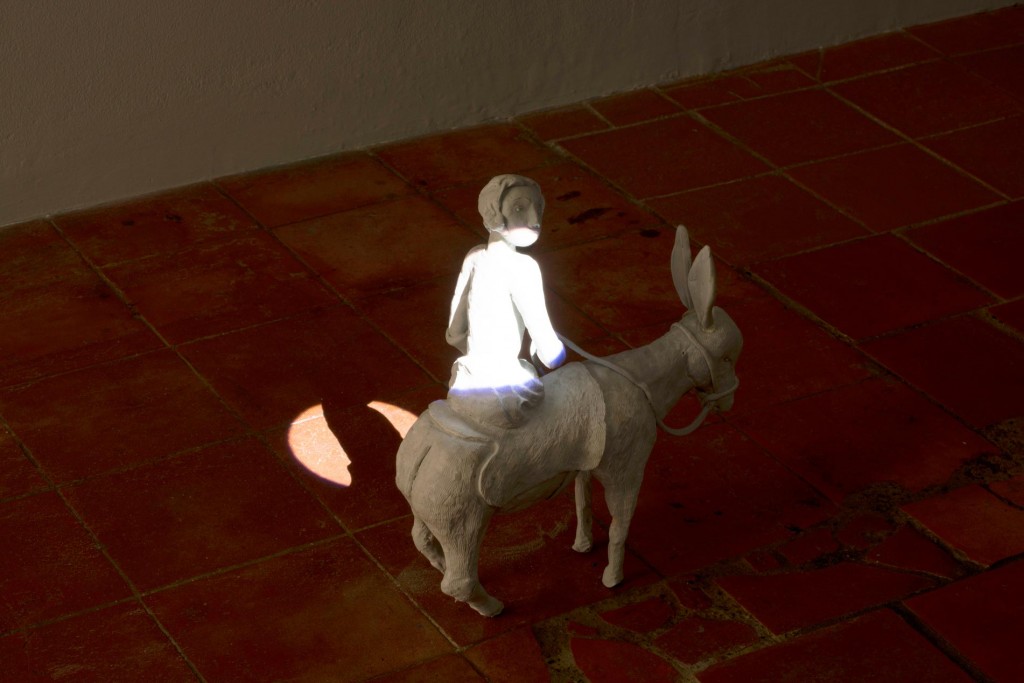 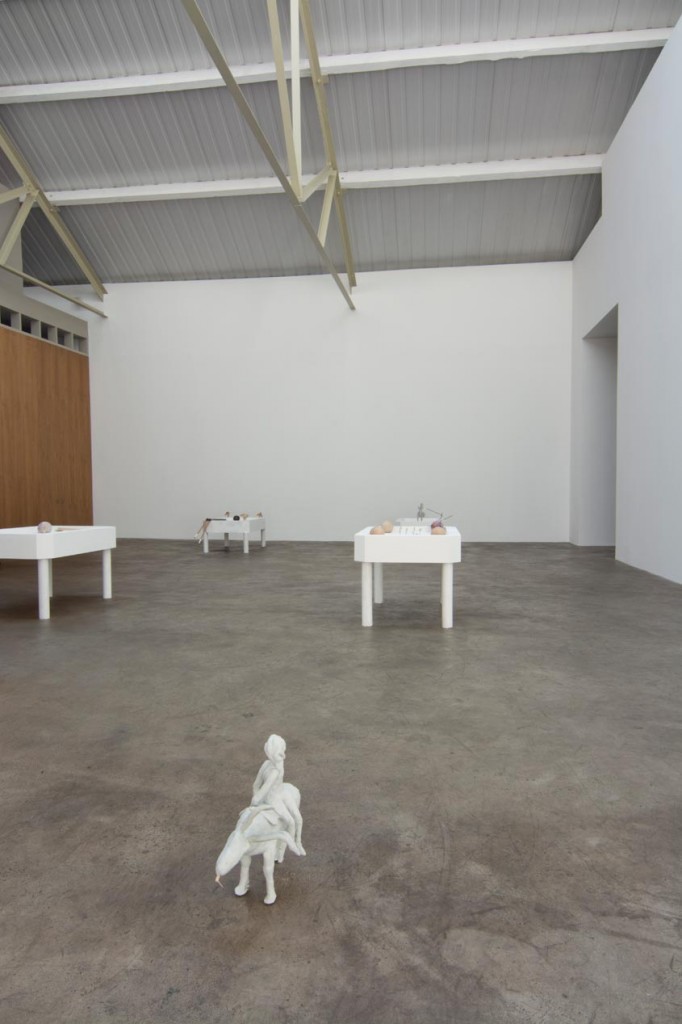 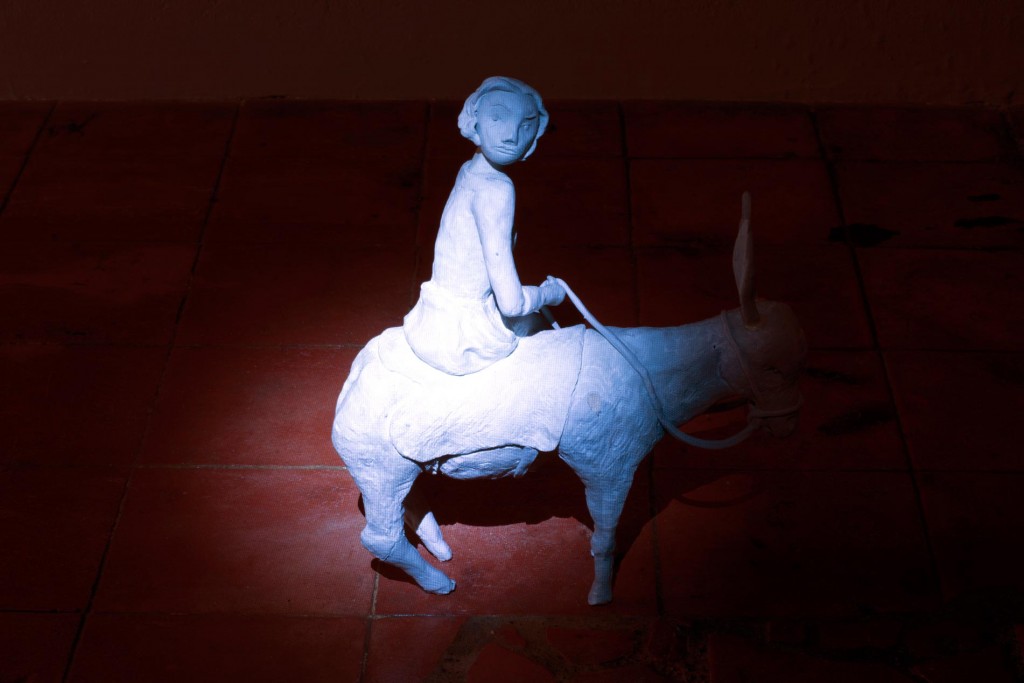