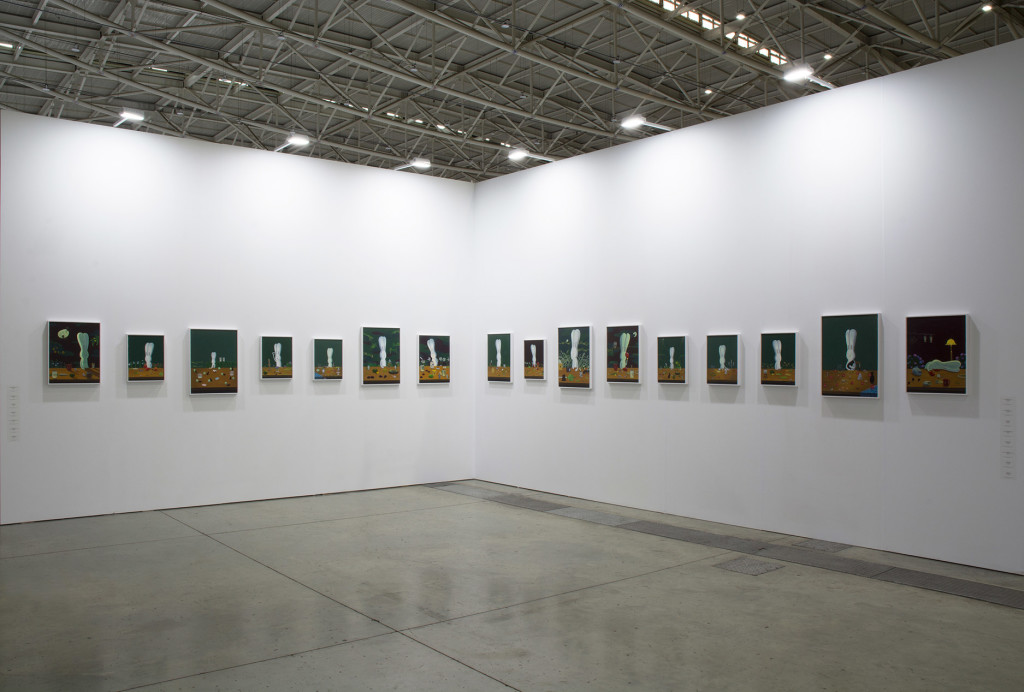 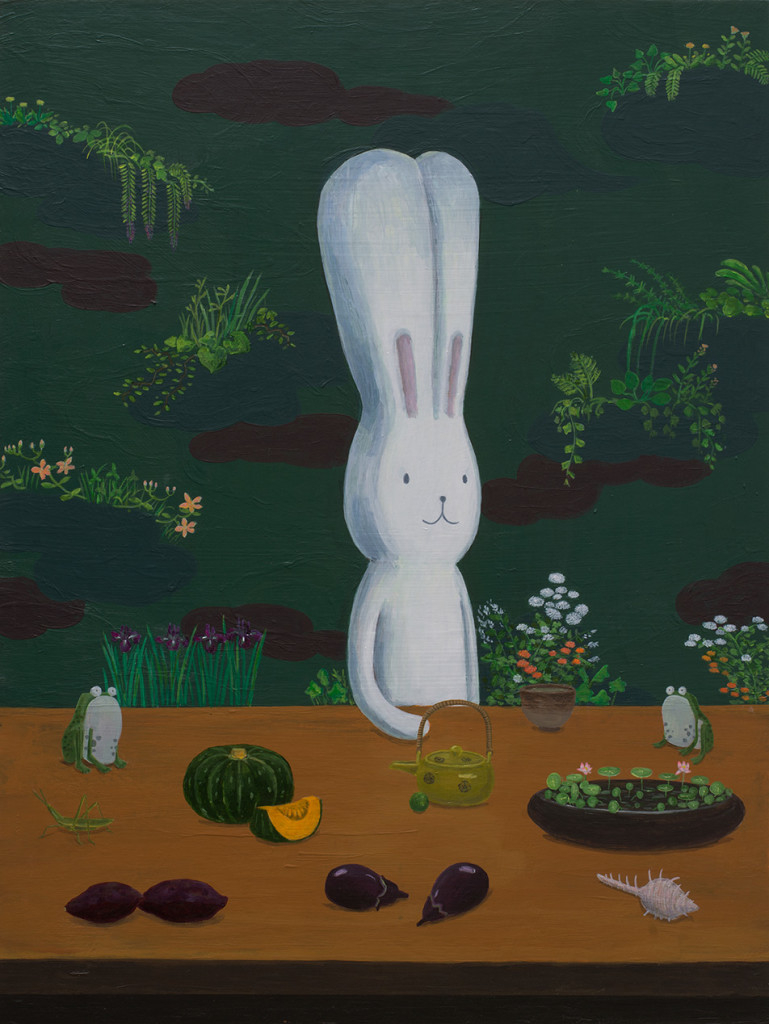 For more than a decade, Atsushi Kaga (born 1988,Yokohama) has been painting ‘self-portrait’ images of his alter ego, Usacchi, (roughly translated as ‘soft rabbit’ in the sense of a cute child’s toy), who in keeping with notions of traditional storytelling common across multiple continents, is an exaggerated, deeply lovable trickster figure with enormous ears and the most rudimentarily expressive face, comprising merely of three tiny dots and three conjoined lines.

Curiously the white rabbit, as trickster or illusive Pooka, appears to be global folkloric phenomena, expanding over thousands of years and numerous cultures. From China and Japan, where the rabbit of good fortune resides in the moon, to ancient Egypt and Greece, through the fables of Aesop, to Africa and ultimately to America, where the mischievous spirit belatedly re-appears as Brer Rabbit, stories passed orally from generation to generation of African-American slaves. In all iterations, the adorable ‘underdog’ betters its masters, adapts and thrives in unknown, unfamiliar environments and situations.

Stylistically Kaga’s series of ‘self-portrait’ paintings, Usacchi’s long summer into fall, created particularly for Taipei Dangdai, during the summer and Autumn of 2019, has inherited the visual characteristics of 17th century Dutch portraiture. With such self-imposed restrictions and scales; an illusionistic table top placed before a light-sucking background, the visual space becomes a stage set or performative environ, before which Kaga’s remarkable imagination plays out through his comic creation: enter Usacchi. As Atsushi Kaga was growing up he imagined being a stand-up comic, but by his late teens came to the self-realisation that it was not in the Japanese character to naturally inhabit public performativity in such a personally challenging and self-reflexively-revealing manner. This, he maintains, is how he came to art-making, to redirect this urge to produce self-effacing, darkly comedic narratives that essentially drew upon biographical and psychological analysis, through invented characters and interweaving stories, which together cover the range of the artist’s psychological make up, liberating his thoughts and wildest dreams.

Between stilled life and ‘live action’ intervention, alongside a lot of cats, classic Vanitas themes of love, life and death, unbridled joy to melancholy and ennui play across Kaga’s painted stage. Even the series title embodies the inevitable promise of emptiness and loss buried at the heart of an idea of bounty. Light and warmth fade to darkness and chill, as does the cornucopic harvest of exotic produce diminish to the winter staples of cabbage, carrots, brown bread and butter. One flower never quite opens. 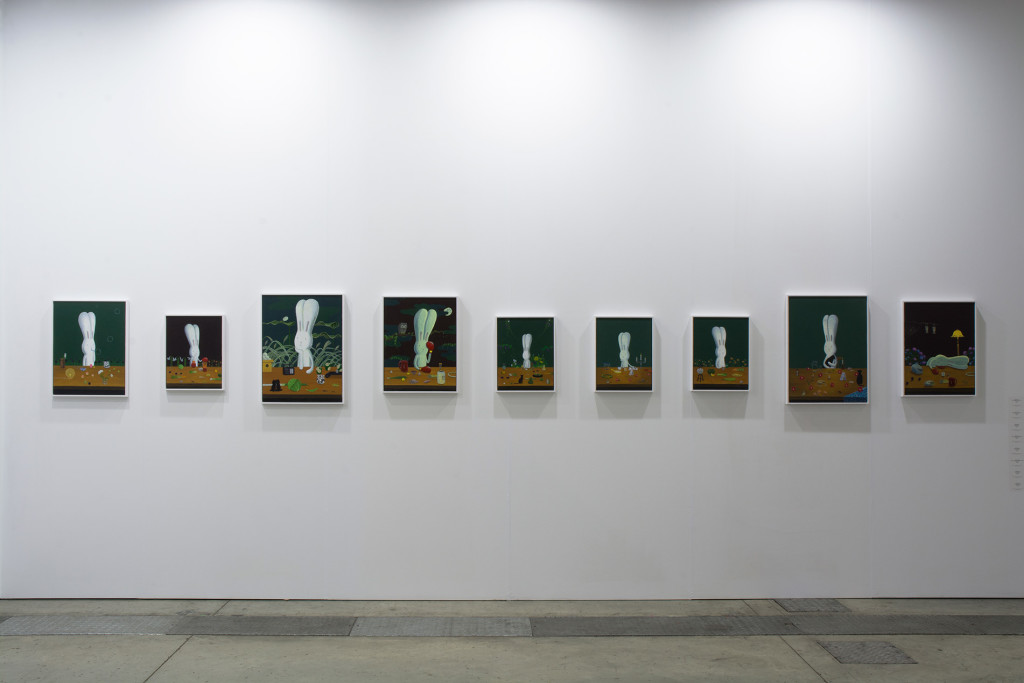 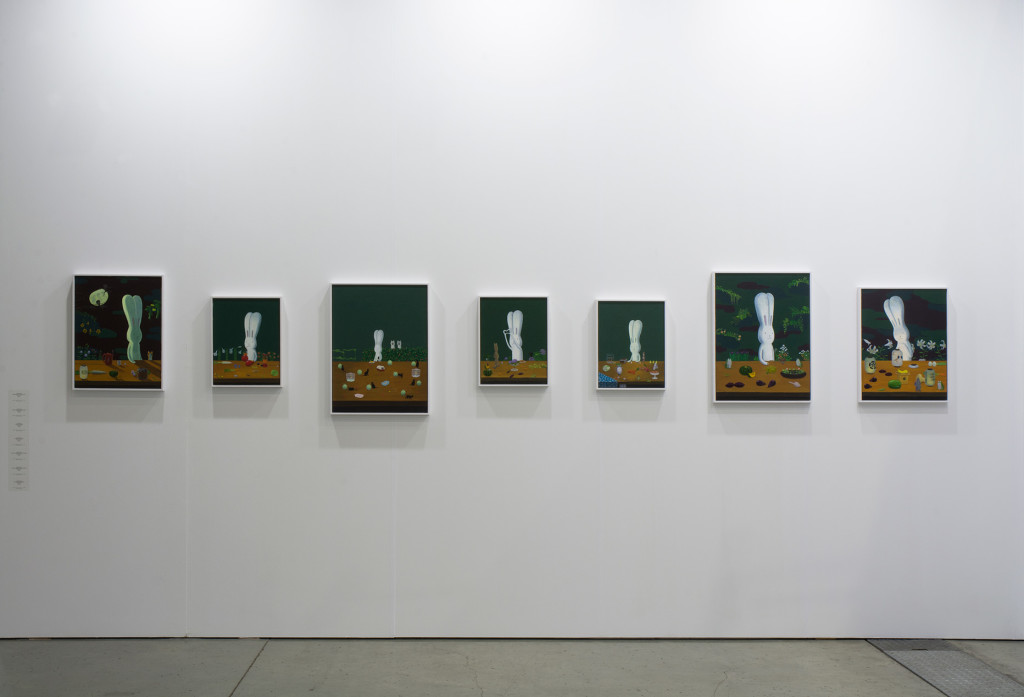 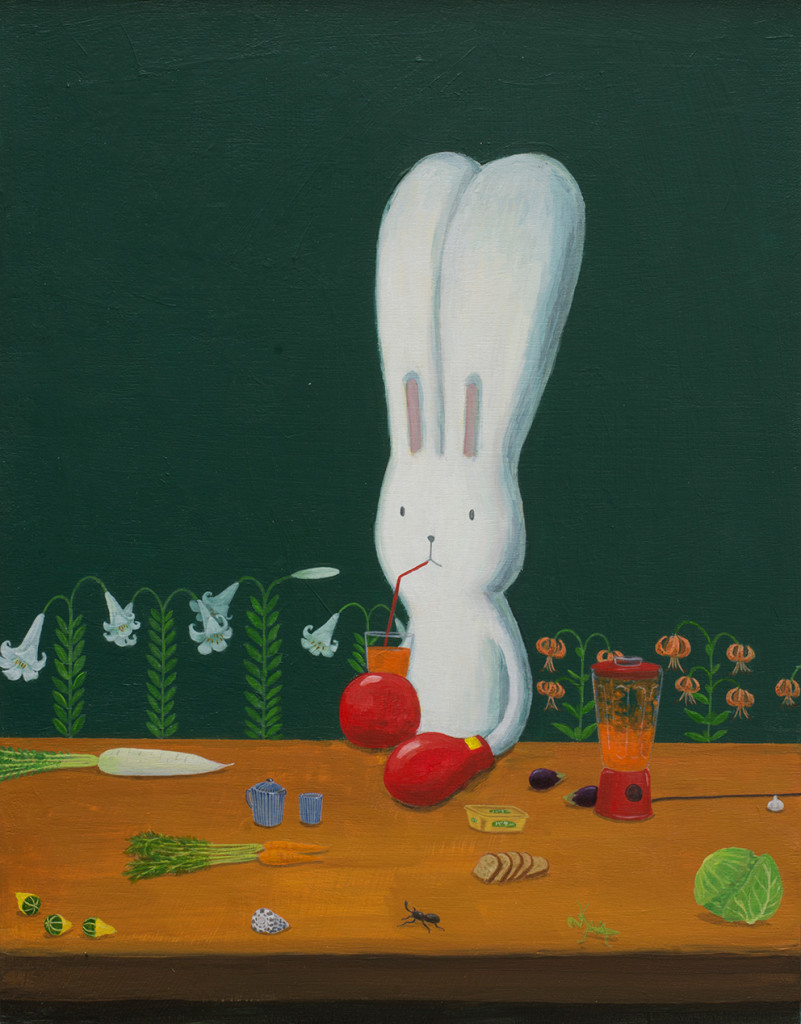 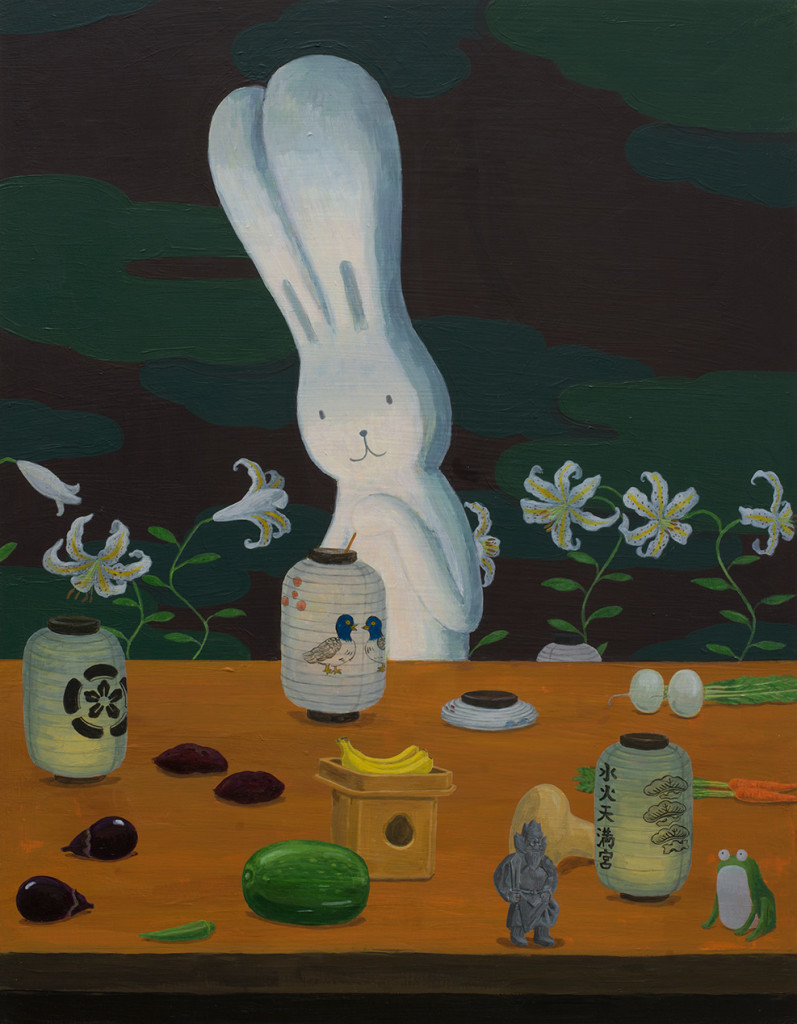 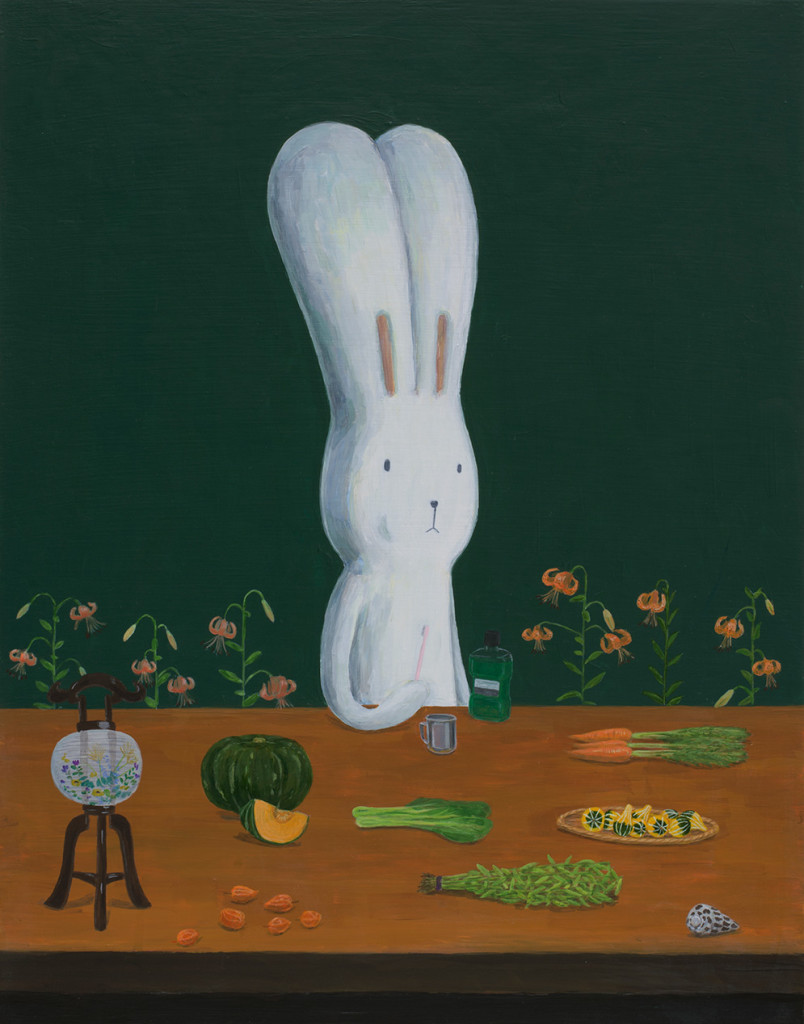 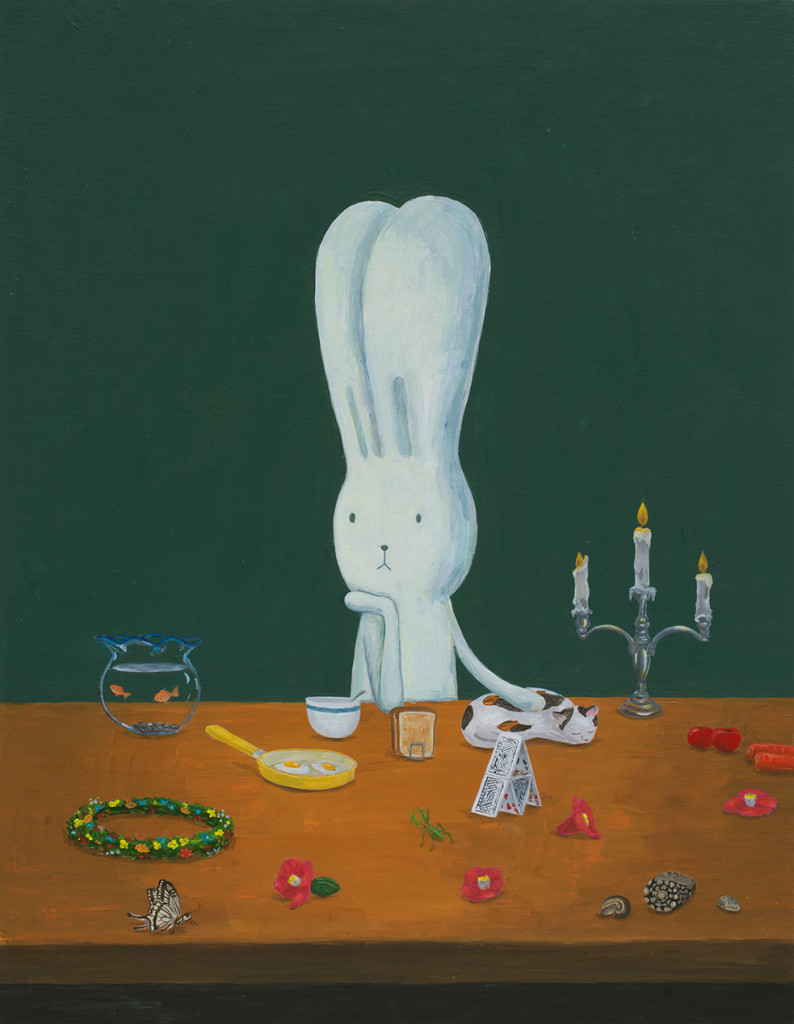