Rest with us in peace

Rest with us in peace

Lady Macbeth: These deeds must not be thought
After these ways; so, it will make us mad.
Macbeth: Methought I heard a voice cry ‘sleep no more!
Macbeth doth murder sleep,’ the innocent sleep,
Sleep that knits up the ravell’d sleeve of care
The death of each day’s life, sore labour’s bath
Balm of hurt minds, great nature’s second course,
Chief nourisher in life’s feast.1

Macbeth, the un-innocent, a metaphor of ordinary decency corrupted, is not in a happy place. Duncan done-for, the most famous of fictional murderers is riddled with appropriate, but somehow unexpected self-doubt and guilt that denies him nature’s cure-all remedy, the balm of sleep.  Only the innocent, it would seem, the pure of heart, are afforded nature’s fundamental right, and innocence is done best in the unpremeditated behaviour of the animal kingdom. Enter Atshusi Kaga, stage left, whose art is almost entirely mediated through his alter ego, Usacchi (a loveable trickster rabbit) and the attendant cast of animal avatars who speak in metaphoric tongues to the daily struggle with our contemporary world.

The practice of Atsushi Kaga (born Japan 1978, lives and works in Dublin) is as philosophically and physcologically dense as it is intentionally deceptive.  The fact that it manifests itself in the classical Japanese popularist cultural disciplines of Anime and Manga, with all their apparently attendant cuteness, masks the darker intentions of an artist intelligently working with the tools of incisive humour and social satire, conflating personal narratives and references to popular culture. In conversation at his IMMA studio, Atsushi Kaga draws attention towards two oddly diverse but equally significant influences on this much-anticipated second exhibition, Rest with us in peace, at mother’s tankstation. He cites the Myotonic Goat and Sunny Liston’s three encounters with Muhammad Ali in 1964-5. These may seem like odd reference points for Kaga, but for anyone who has become familiar with his practice over the past few years would have come to expect the unexpected, his imagination knows few bounds.

Firstly, the Myotonic goat… When startled, younger goats with the hereditary genetic disorder myotonia congenita will suddenly stiffen, blackout and fall over where they stand/stood at any impending sign of stress or threat. Older goats appear to ‘learn’ from experience (?), reflexively spreading their legs or leaning against something when a moment of terror besets them. Curiously, this phenomenological development denies them the very essence to escape from trauma, as they often continue to run about in an awkward, half-conscious shuffle, presumably terrifying themselves and any would-be aggressor.  A state of self-acknowledgment of food chains and superior aggressors brings us onto Liston.  An unpopular champion, Sunny Liston first fought Ali in defense of the World Heavy Weight title in 1964. At the start of the seventh round, rather than heading back into the ring, Liston surprisingly ducked under the ropes and headed off for the dressing room.  The official story was that he retired with a hurt shoulder, but it was evident to all that he realized that he processed no answers to Ali’s speed and skill.  Liston called-off a rematch in 1965 with only day’s notice, and the inevitable final meeting2 lasted under two minutes with Liston spread-eagled on the canvas, a famously emotive image that recently caught Kaga’s attention.3  At least Liston demonstrated that he knew himself and his limitations and used this understanding to protect himself from unnecessary harm.

Eight pages on from the introductory quote above, Ross inquires of Macduff; “How goes the World, Sir, Now?”  Only those holidaying on Jupiter for the past couple of years would have not noticed that the world has become more like Macbeth’s hell, and to which, Kaga seems to advocate the highly potent coping methodology of myotonia congenita. It is as if the world’s current state, with the endless stream of bad and disaffecting news has triggered Kaga’s off button, a desire for occlusive oblivion. A vast multi-panel centrepiece painting of Hell4, contains no one (good) awake: Kaga’s usual cast of characters, Usacchi, Kumacchi, Alex, Pandas, Panda-angels, Pretzel men, joined by a few new members, including a strange, stylized Japanese comic book elephant, all sleep in positions reminiscent of Liston’s KO. The abundance and pervasiveness of Kaga’s metaphor of self-induced, self-protective narcolepsy, tacitly underscores the inherently innocent construct of Kaga’s fantasy world. Following Macbeth’s logic of “the innocent sleep”, they must all only be visitors or accidental tourists to this realm of the damned.

Complex narratives, sub-texts and human dualities, typical of Kaga’s practice, start to emerge; individuality and social identification, innocence and experience, integrity and corruptibility, nature and nurture, freedom and constriction. Atop a sculpted mountain Usacchi, Kumacchi and Robert (central Kaga avatars) sleep soundly, seemingly safe in the knowledge that they are guarded by dozens of mustachioed Pretzel men.  Seeking narrative keys from previous Kaga works, for example, his 2009 animation, Factory, introduces the Pretzel men to represent individuality in an ‘indentified’5 world, and now they protect the sleeping artist himself.  Moreover, Kaga’s recent use of fabric collage adds another willingly perverse dynamic.  He recounts that as a child his mother had a passion for fashioning quaint home-made quilted fabric bags for school, in which Kaga and siblings would carry, books, lunch and gym equipment. Kaga has taken this childhood memory of social embarrassment and negotiated it into his on-going discussions and contextualization of Otaku6 culture in a harsh and unsympathetic world.  As a self-professed ‘otaku’, Kaga’s work withdraws further into its imaginary world as a self-protection against the ‘real’, so his imagination becomes more real to fellow otakus. Kaga’s creation, the unrestrained libertine Usacchi is increasingly adopted as cultural hero, a figure-head, standing against personal injustice.

There are those that do not sleep in this new body of work, a chorus line of radiantly happy characters link hands across one of the panels of Hell. They wear retro silver space-suits, to protect them from the sleeping sickness that otherwise pervades the world. They are either evil and up to no good or have happily found a way to escape the ‘grey flats’7 of this world to a better place. Better still, perhaps they are visiting aliens from another world who have come to fix things while we sleep. Please.

Atsushi Kaga studied Fine Art at the National College of Art & Design Dublin and is currently an artist in residence at the Irish Museum of Modern Art.  Other recent residencies and shows include Galleria LEME, Sao Paolo, The Fountainhead, Miami and a related solo presentation with mother’s tankstation at NADA, (all 2009).

1 William Shakespeare, Macbeth.
2 Held in Lewison, Maine, 1965.
3 In the total shambles that followed, the referee, as the rules assert,  never counted over Liston and did not order Ali to a neutral corner; instead Ali yelled hysterically at Liston, running around the ring, arms aloft. During this time Liston made an apparent attempt to get back to his feet, before again rolling onto his back. After Liston finally got up, ringside boxing writer, who had no authority, informed the referee that Liston had been on the canvas for over 10 seconds (during which time the fight briefly resumed), and that the fight should be over. The referee then waved the fight off. The photograph of the Ali/Liston knockdown that influenced Kaga (by renowned sports photographer Neil Leifer) is one of the most heavily promoted photos in the history of the media, and was used as the cover of the Sports Illustrated canonical issue, The Century’s Greatest Sports Photos.
4 Hell, is the third in a related, classical series of monumental works, Purgatory, (2007) exhibited at Kaga’s first mother’s show, followed by I want to bring love to socially neglected parts of you, that is my mission, (Heaven), 2008, made for the Butler Gallery exhibition of the same title, and finally the last installment, Hell, based upon the anti-heroic defeat of Sunny Liston by Muhammad Ali.
5 Identified, as in social identification; a conscious commitment to a mode of behaviour or appearance with the intention of blending, being part of a acceptable or recognizable sociological group.
6 ‘Otaku’, a term coined by Akio Nakamori in the early 1980s for a particular subculture of Japanese nerd or fan, which has strongly influenced the direction of Kaga’s work. While some of Japan’s otaku use the term for self-describing, semi-humorously or proudly, there has been consistent negativity towards otakus and otaku culture, including incidents of “otaku hatred” and a number of infamous murders. The amount and degree of social hostility against otakus has increased noticeably over the past years along with frequent targeting of otakus by law enforcement.
7 Charles Baudelaire’s term. 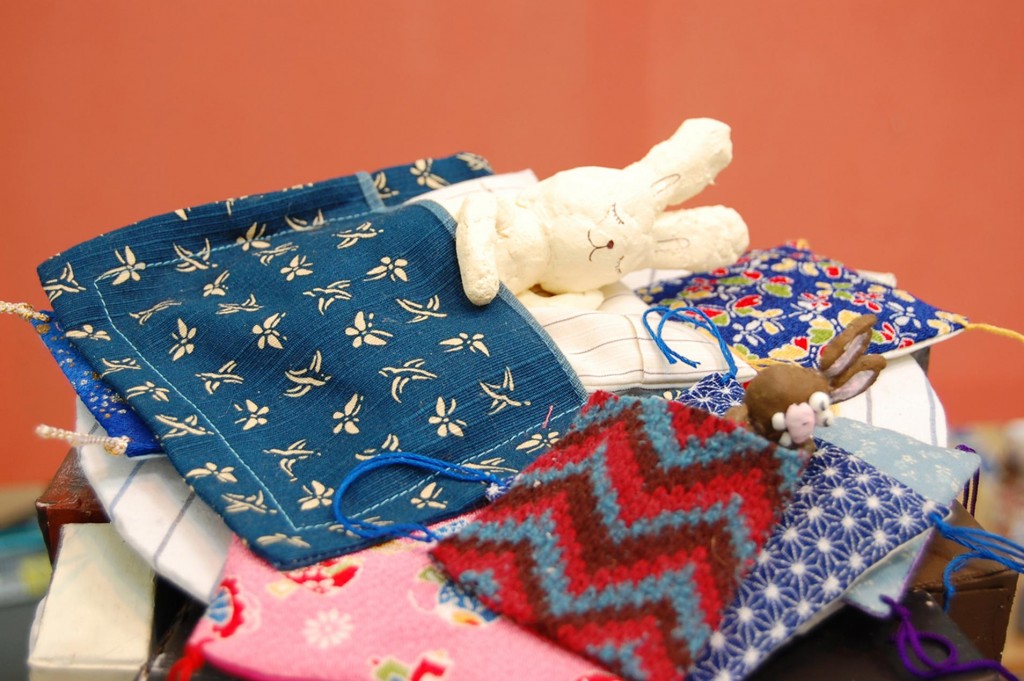 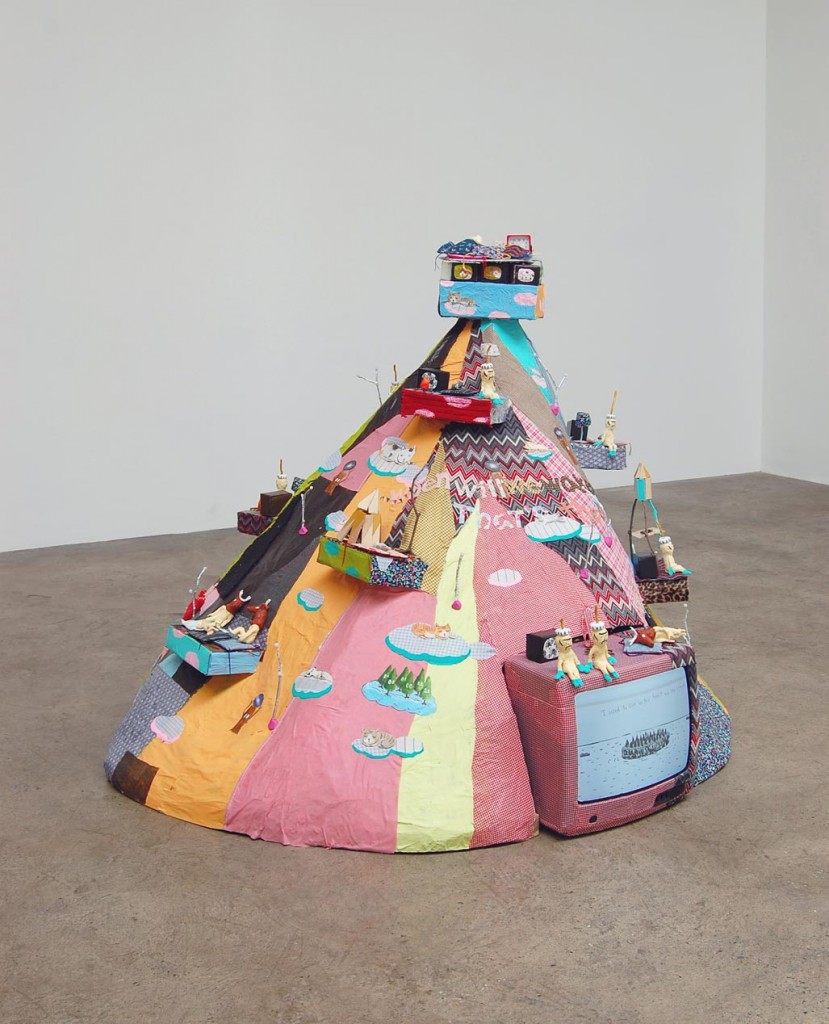 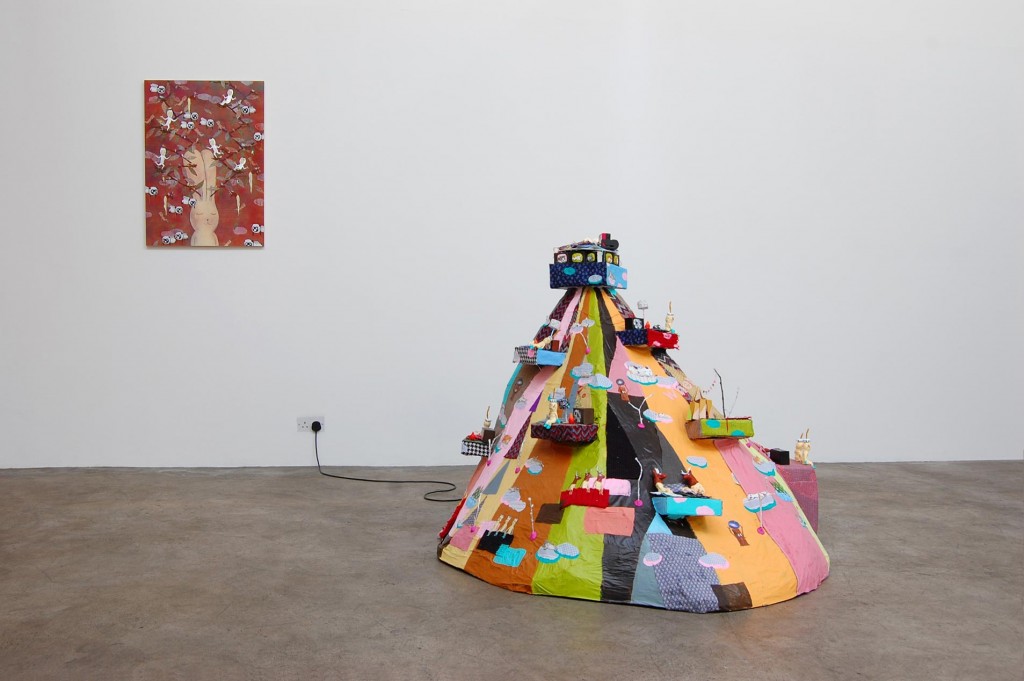 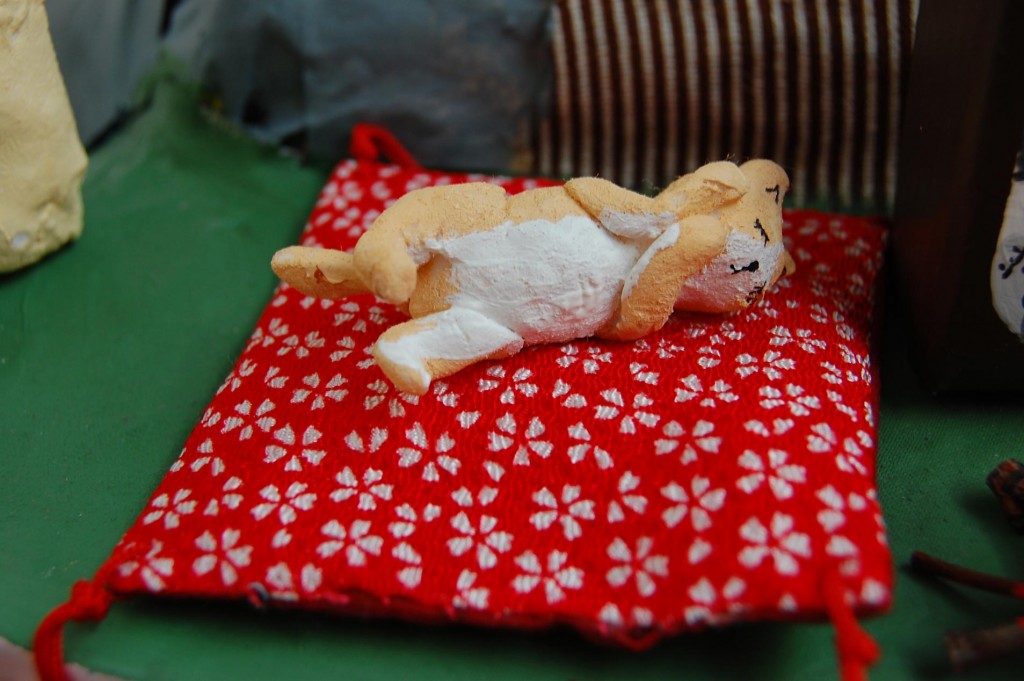 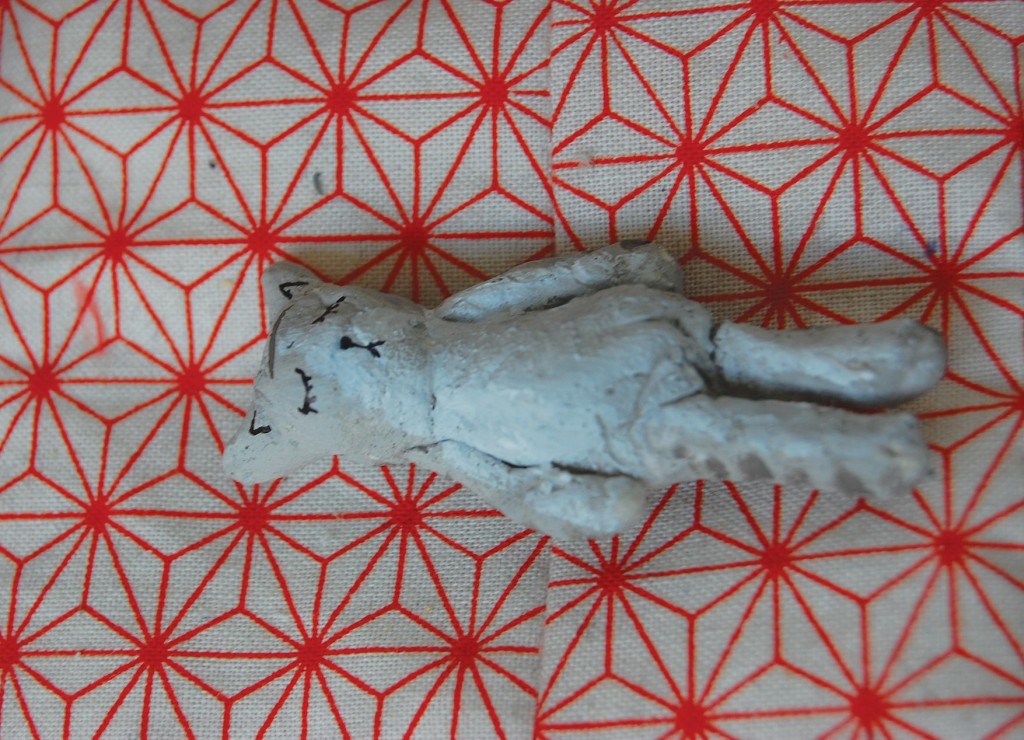 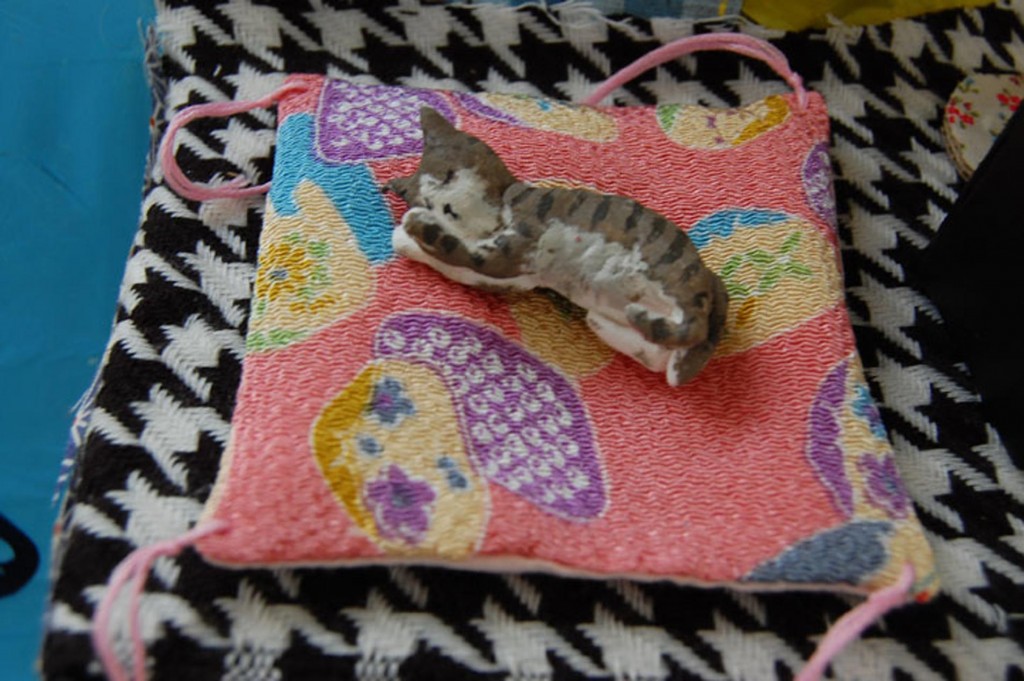 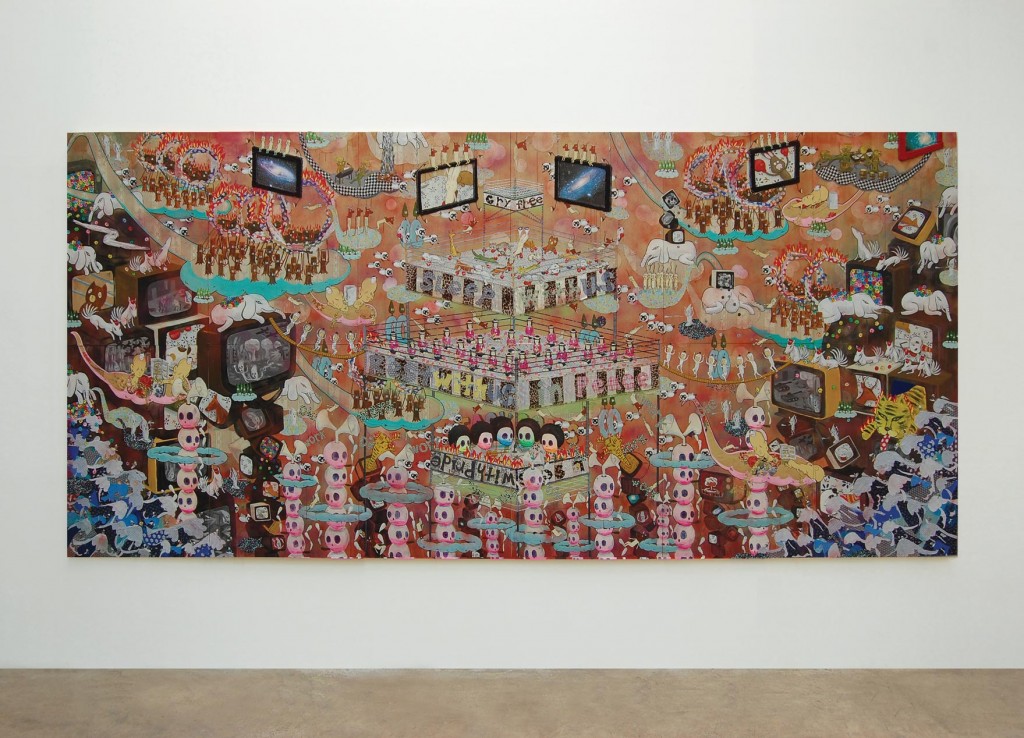 Atsushi Kaga I fell asleep while I was thinking about a galaxy far away from here
Acrylic, spray paint, glitter, collaged fabric, silver foil, decoupage on plywood
206 x 436cm
2010 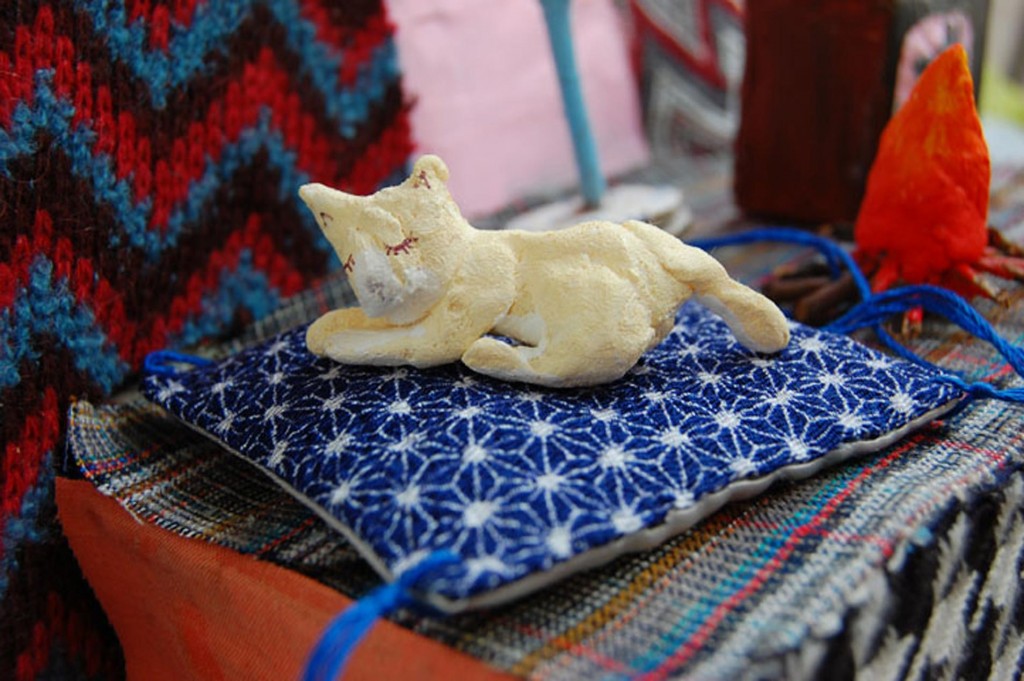 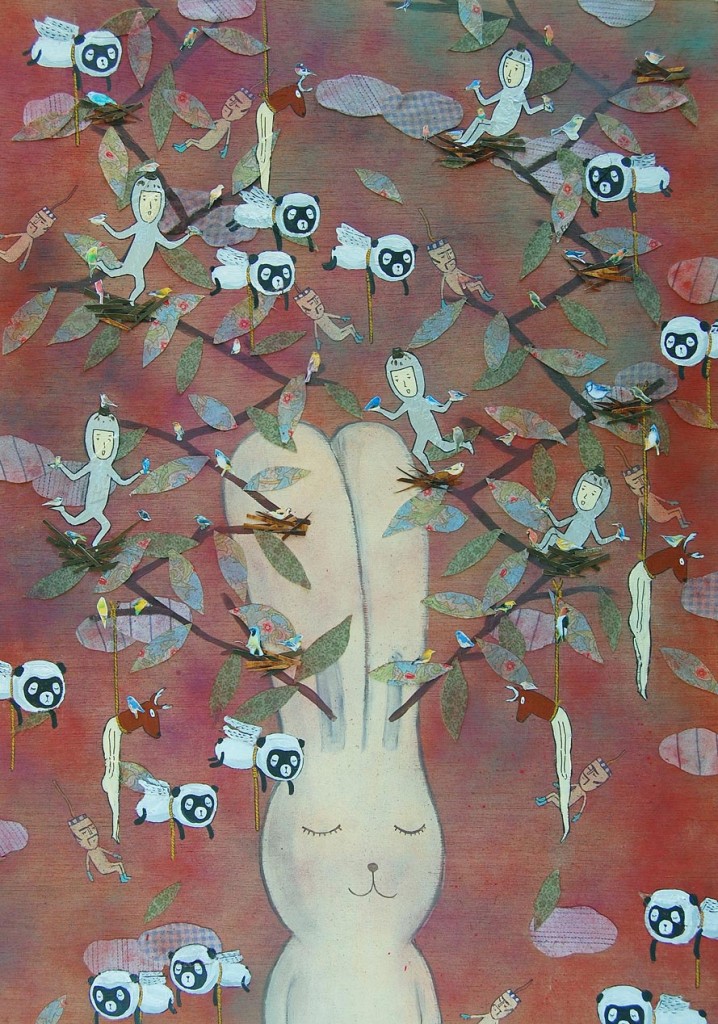 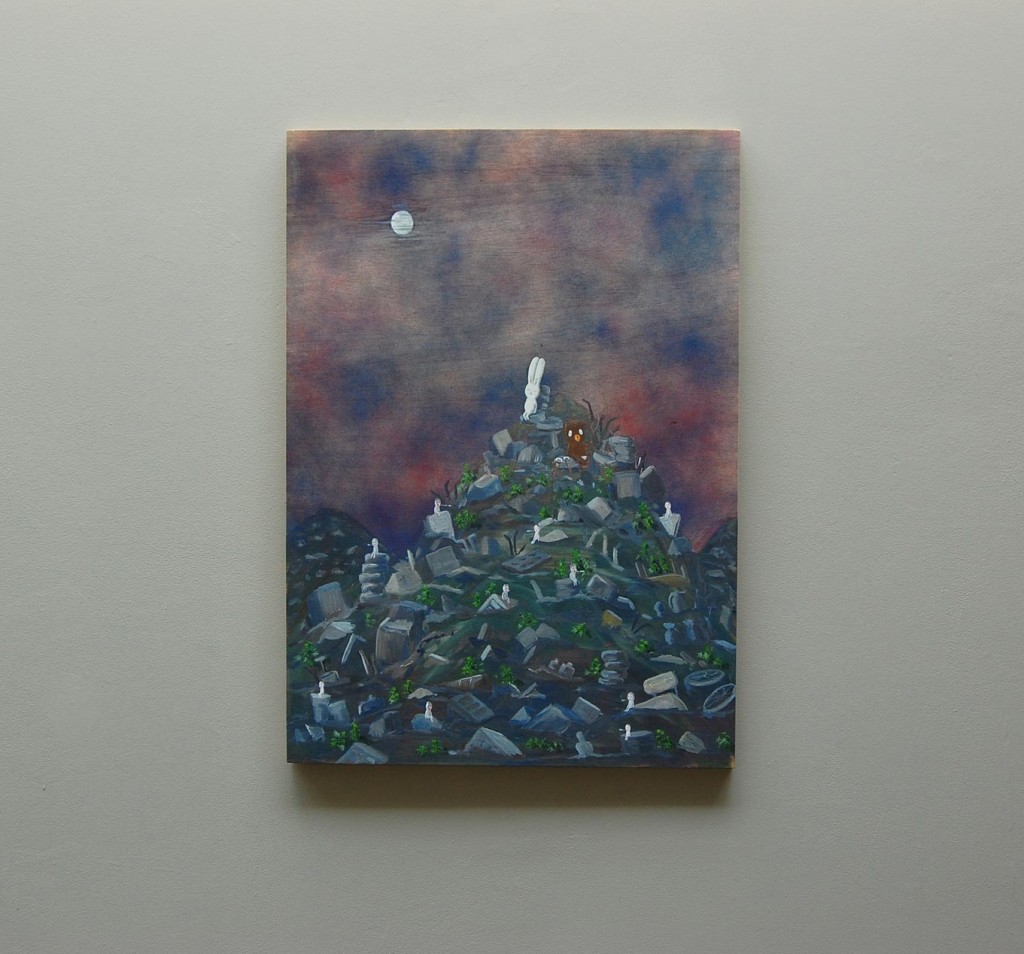 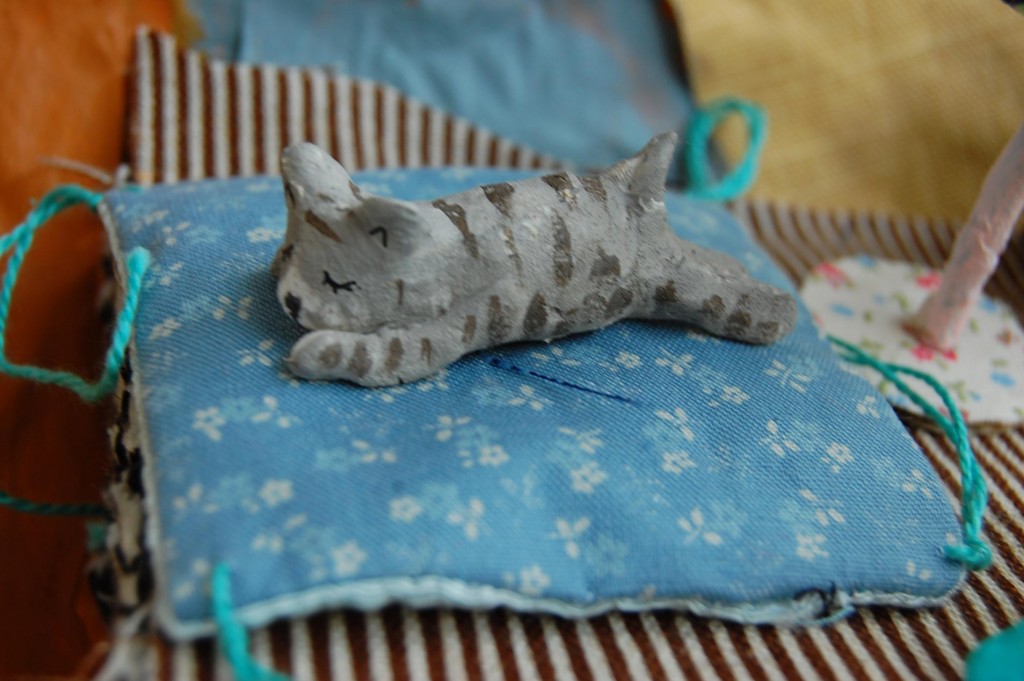 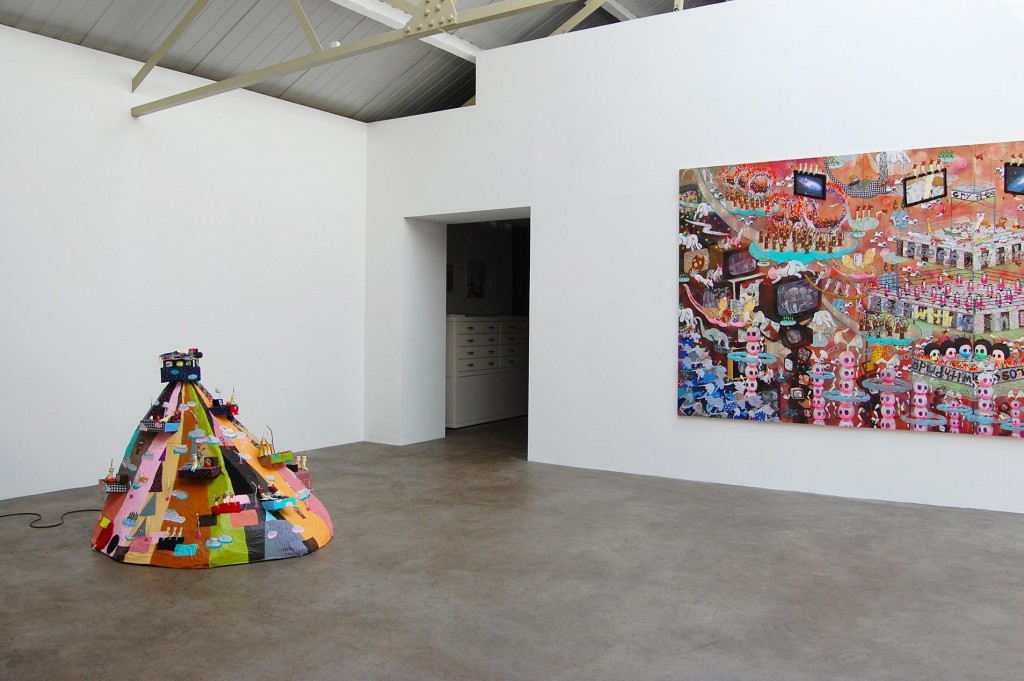 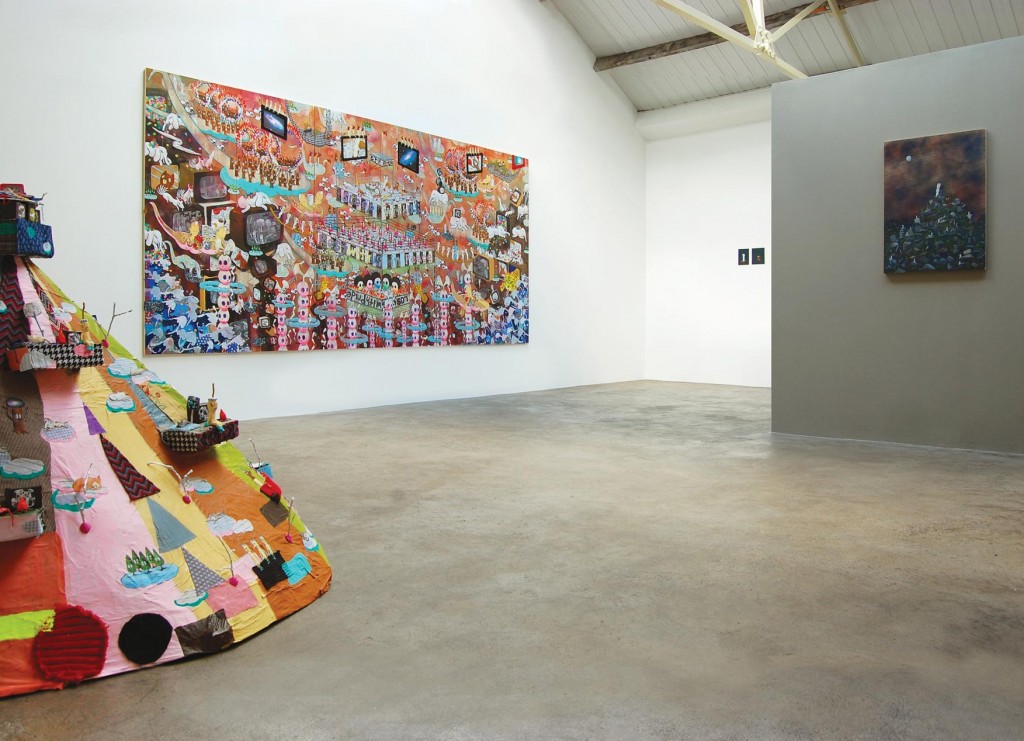