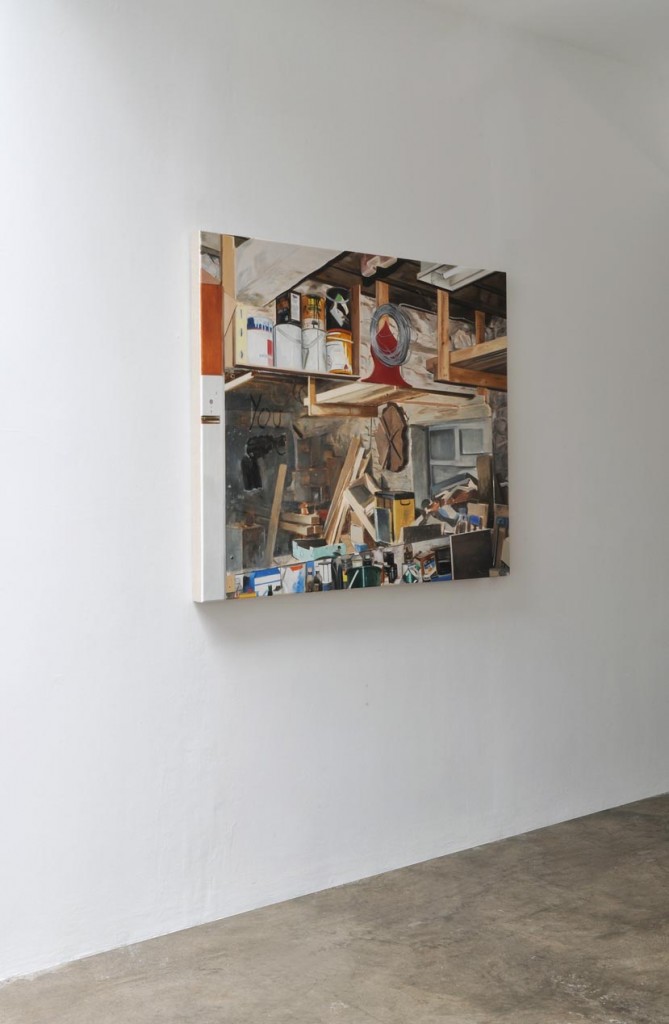 The White Rabbit put on his spectacles. “Where shall I begin your Majesty?” he asked. “Begin at the beginning,” the King said gravely, “and go on till you come to the end: then stop.” …There was a general clapping of hands at this: it was the first really clever thing the King had said all day.” Alice in Wonderland, pg 182.

If the term ‘remake’ is generally understood, in the context of film, as direct reference to something in the spectrum of reused material; from a line-by-line retake, to an entirely new version of an extant work: then what does it indicate for a young visual artist – where there is a standard expectation (cultural-peer-pressure) of work being predicated on vangardism and/or originative gesture – to launch a whole body of new work into the territory of pastness, or the not new, newly seen?

Realistically, and bravely spoken, there is, of course, nothing new about newness at all, and as the King of Hearts might justly point out, there is only the possibility of one beginning, an ongoing middle with a singular end. Once a beginning has begun, then we should know where we stand; that everything that stretches in-between this and that, stands as work ‘in progress’, a trajectory that arcs, ever-connectedly, from a given point into the unknown. Remake, being the third solo show with mother’s tankstation, by the gifted young, Irish depictive painter, Kevin Cosgrove, follows suggestions of an notioned importance placed upon continuance, on-goingness, tradition even. Cosgrove jokes, that he’s “so old fashioned that he’s almost cool”. Ideas implanted by his selection of previous show titles (N.B. not all remakes use the same title); the untitled first album (2008) – the White Rabbit’s dream of a 70s rock’n’roll entrance – and Just the Usual (2011), all seem to imbed directly to a real world; of music, everyday life, film, etc., rather than aiming at self-conscious artistic declamations. The brilliance of Cosgrove’s painting is… that they are just ‘that’; that they come from such as earthed-reality within his life and habitual understandings, that they seem as if they might have emerged fully-formed, with the conviction of inherent knowing; of feeling, hearing, touching, smelling. Cosgrove’s recent paintings move in close to his habituated places of work, empty, waiting, yet full of life, care. Order that looks like chaos; personal, taxonomies of things placed to hand – that get the most regular use – with the attendant, decreasing cycles of distance equals disfunctionalism. Cosgrove’s astonishing, painterly shorthand makes these densely textured spaces, the complex storage systems of tins, cables, and tubes, intertwined, light-revealed, dusty realities, all seem so easy, so approachable, so perfectly… beautiful.

This is of course appearance, artifice, albeit a superbly articulated one, as the daily reality for Cosgrove’s studio is the maintenance of his ludicrously high standards, making each new step on the arc from the known to the unknown, a quiet torture, a daily challenge of self-belief. Remake, as both a title for the show and a major work within it, is a metaphor that perfectly mirrors Cosgrove’s ongoing tight-rope-act. Centrally themed, if to one side of the actual composition, a vintage Austin A35 patiently awaits restorative attention, which may, or may never come. The right hand side of the canvas similarly awaits completion, as the painted surface arcs from highly, densely finished areas, to roughly sketched-in patches of flatter under painting. The surface tension makes the subject, object relationships within, and without the work, float ambiguously, dreamlike, as if its own reality were as balanced, yet delicate as a filmic back projection: a reality in itself, but one that just might only have a fragile, luminous, dreamlike link, from this to that. 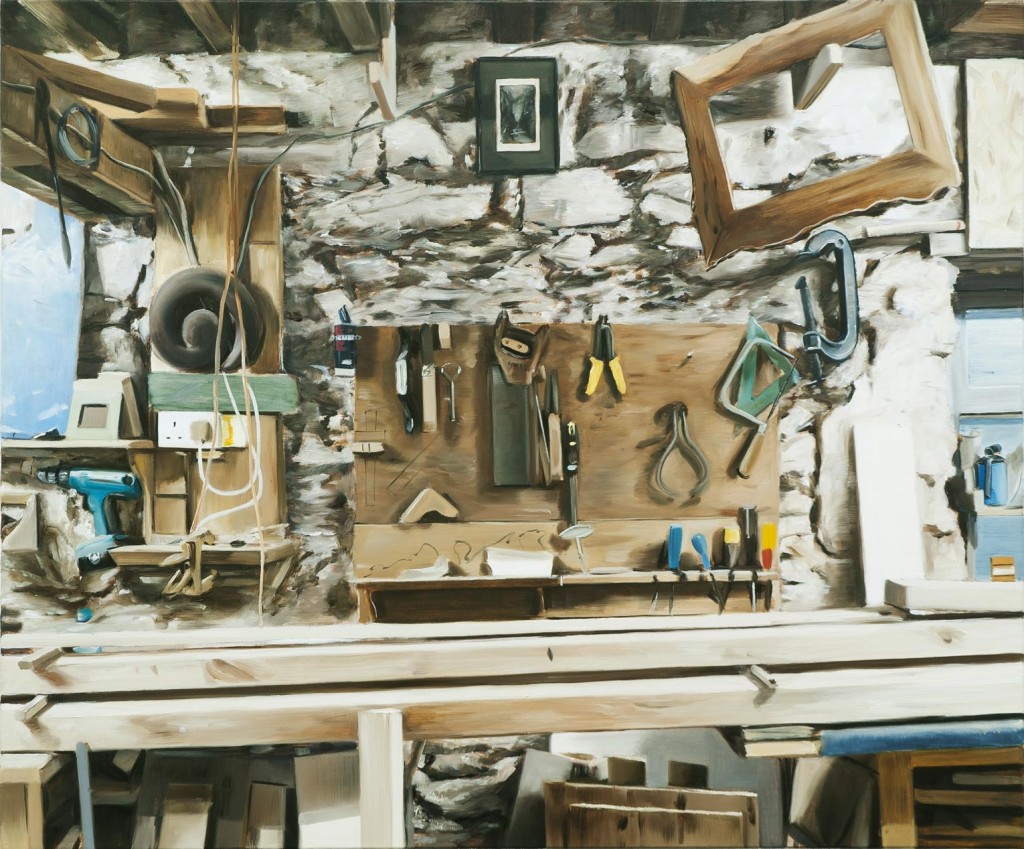 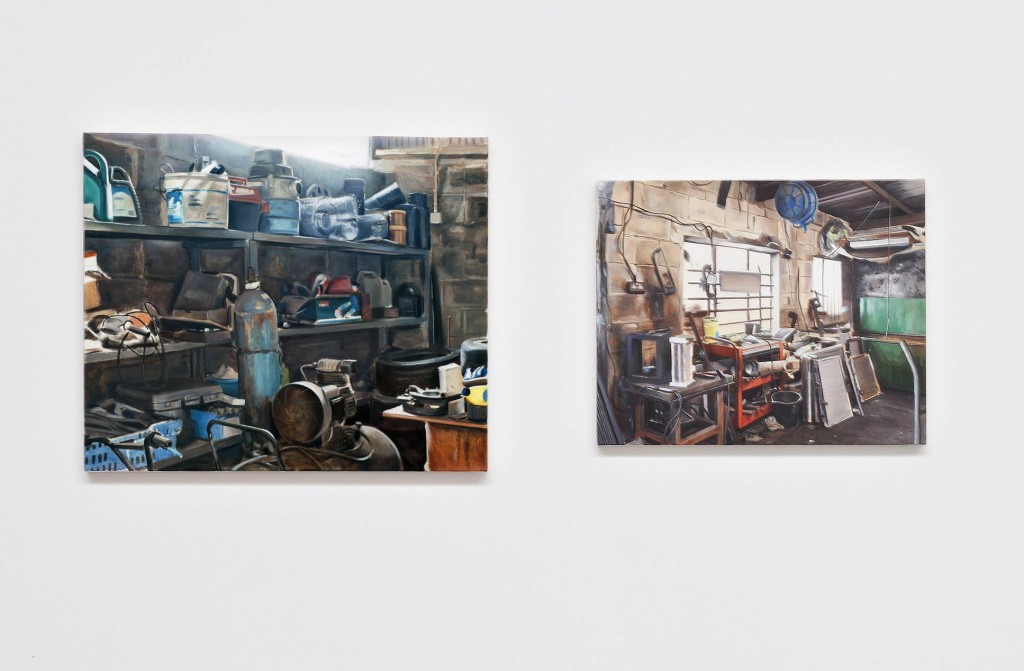 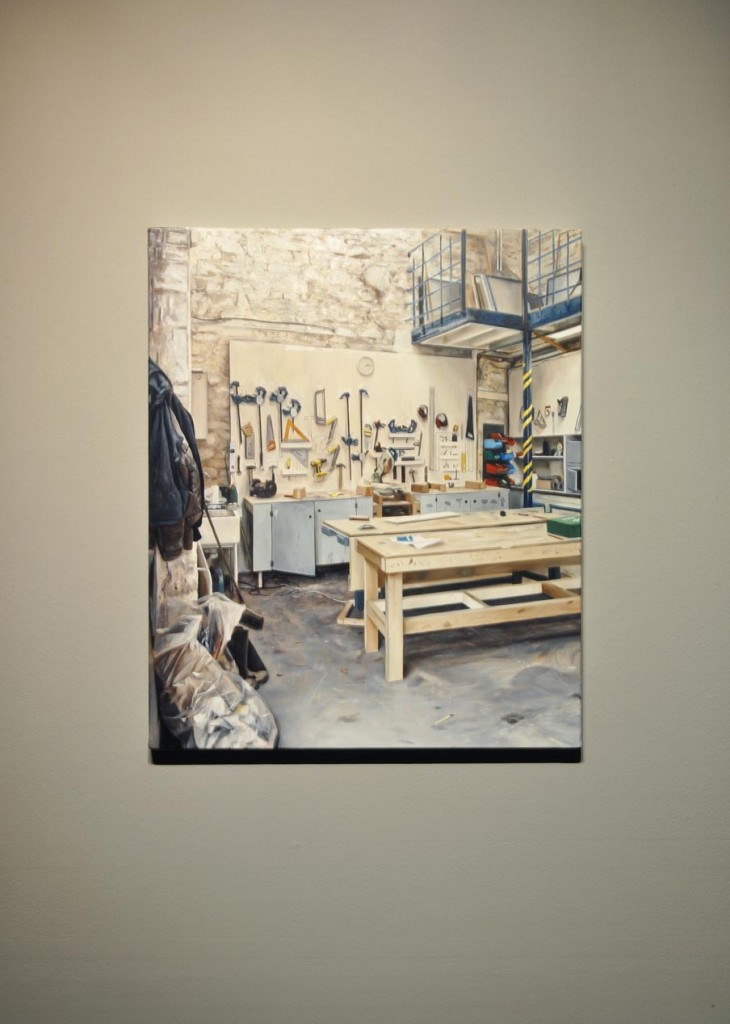 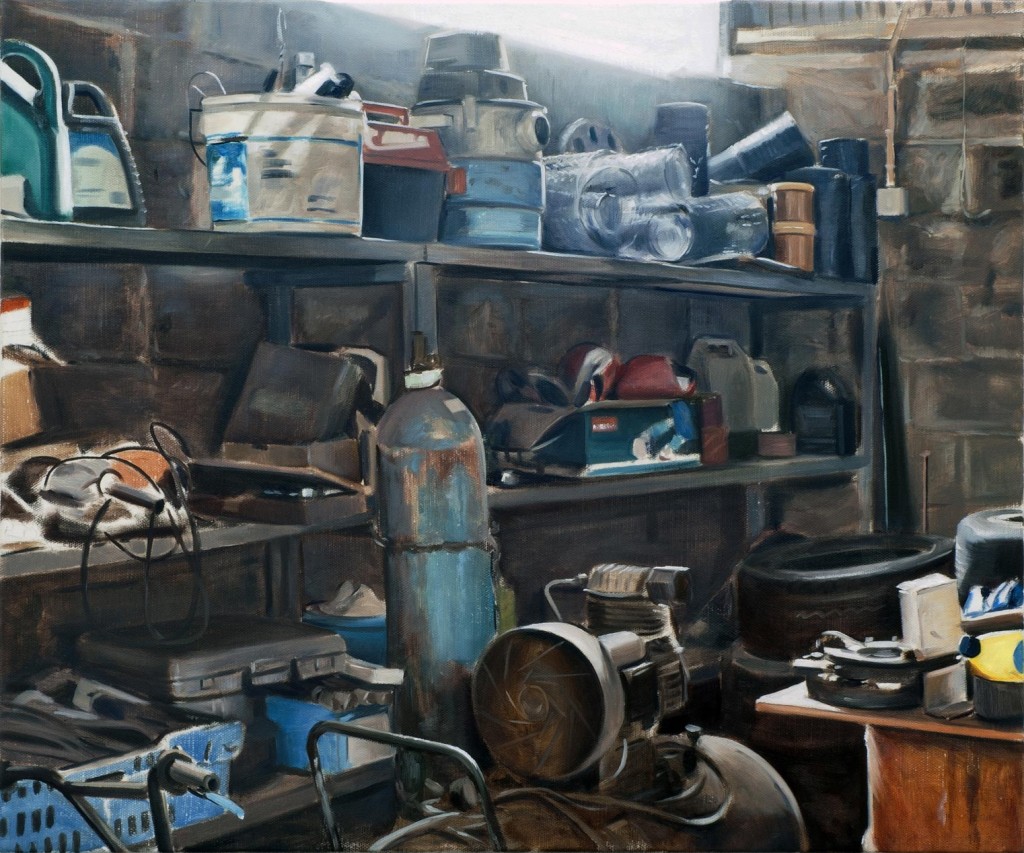 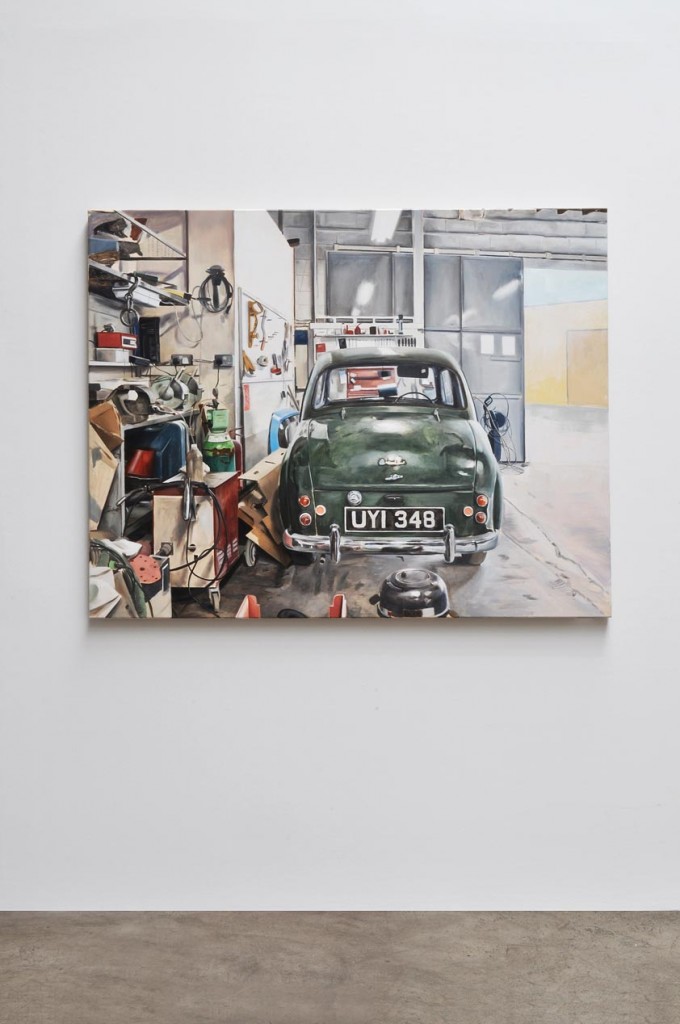 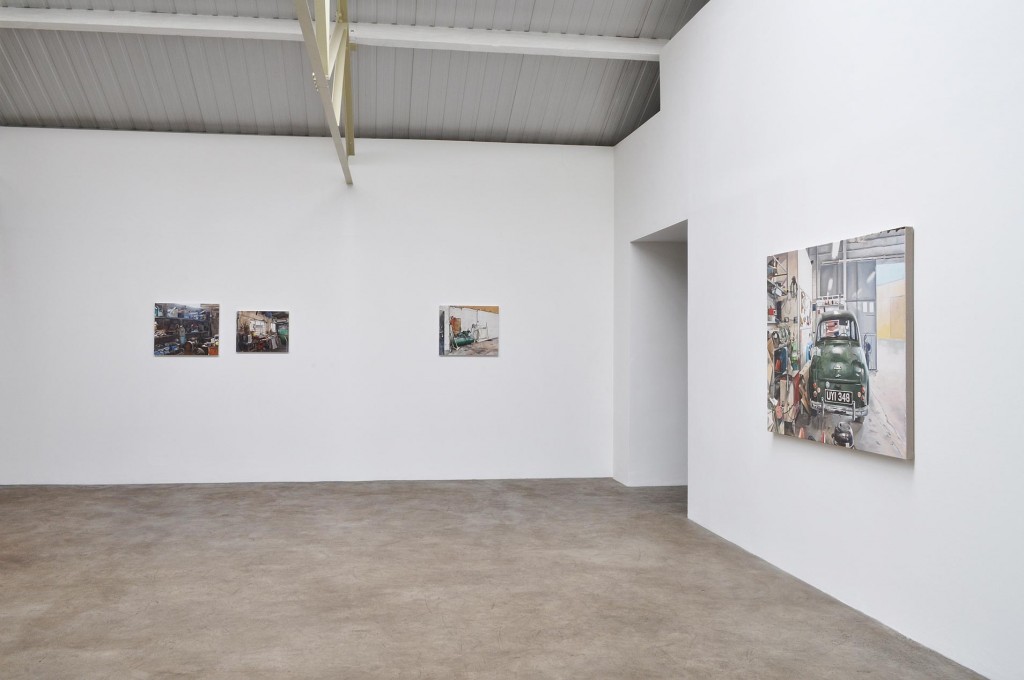 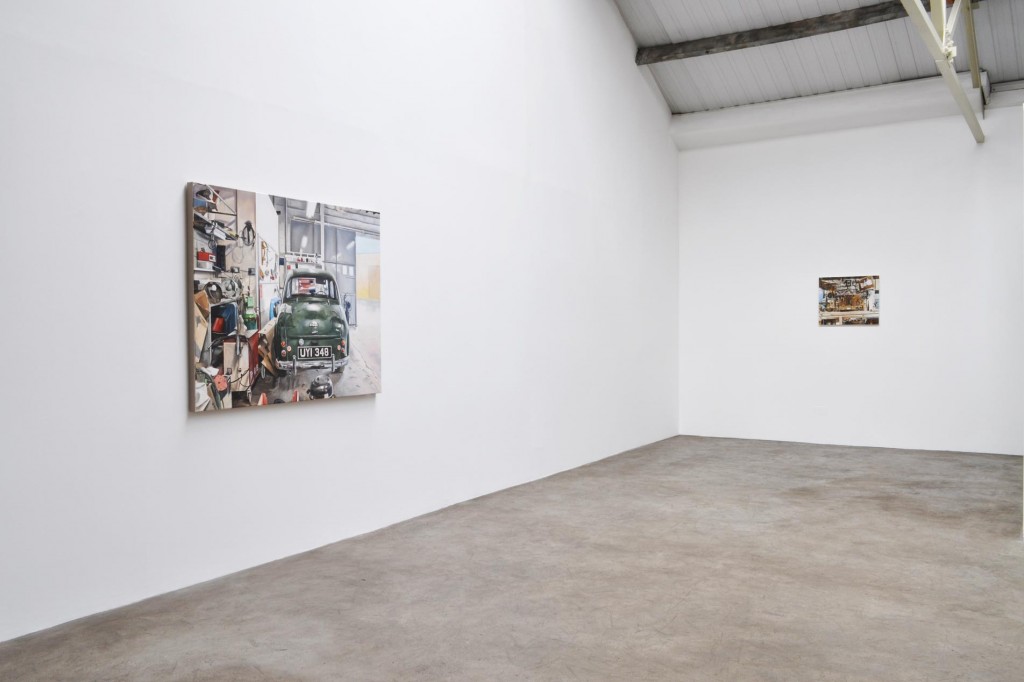