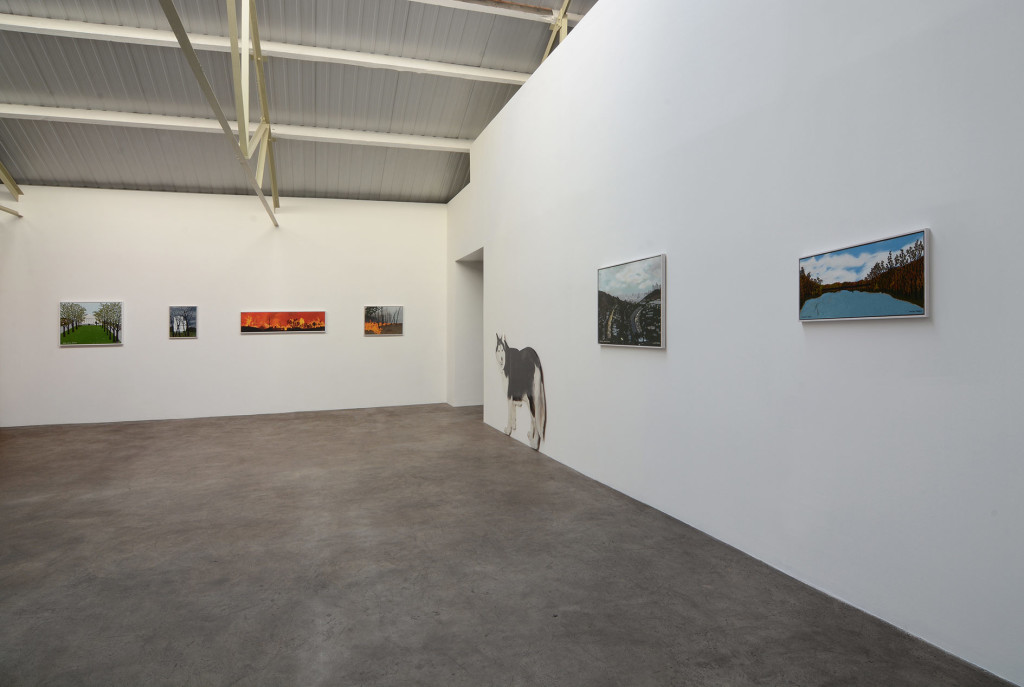 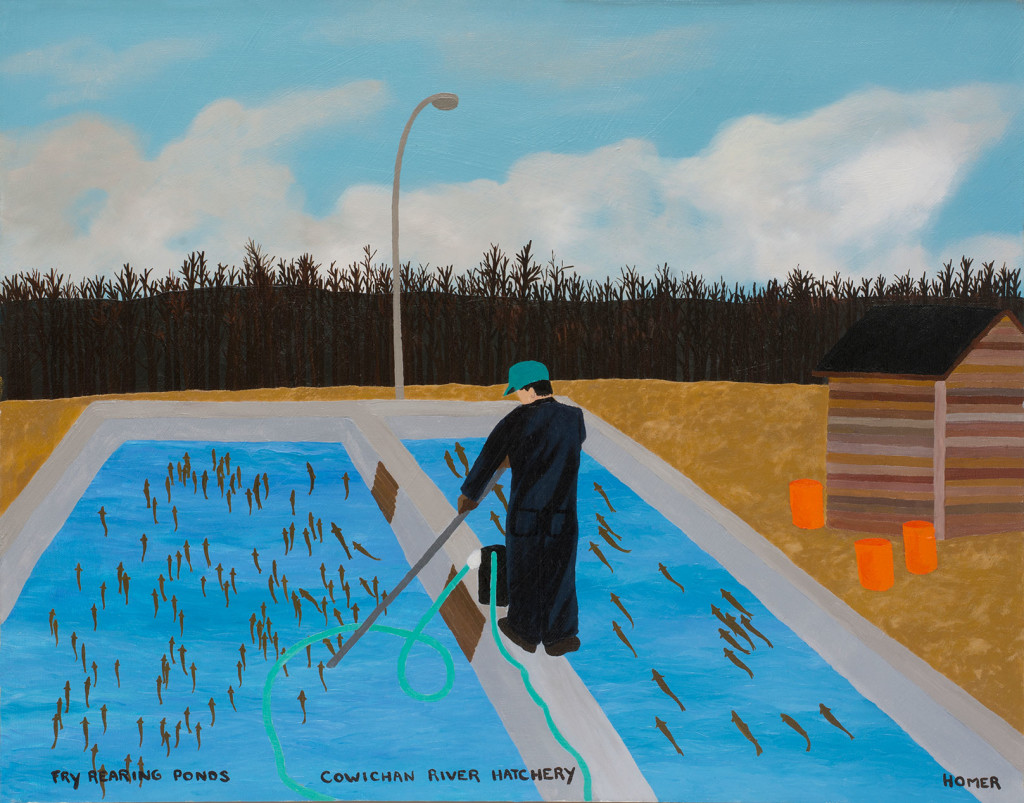 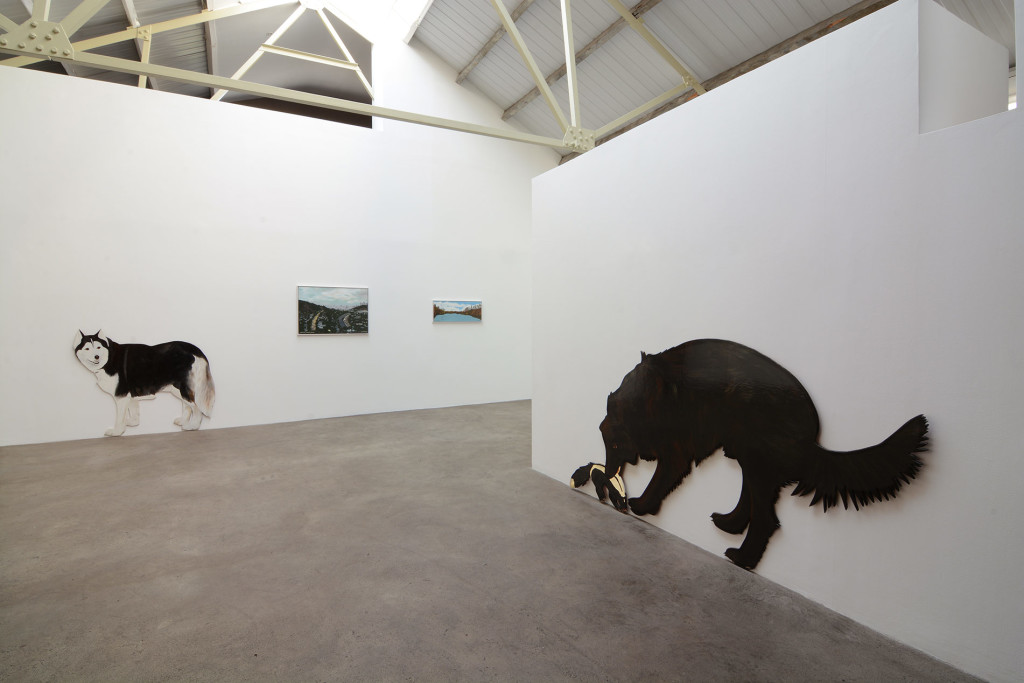 It’s funny how things have their own physical determination, one that transfers from sense to sense. The Dublin gallery of mother’s tankstation has a sort of hall way or cuboid anti-chamber from which one enters directly from Watling Street, positioned pretty immediately below the desk from where most of these writings magically appear… This space retains its ‘original’ form and red flagstone floor from the days of its incarnation as a small sausage factory, and perhaps it is because of this, and its otherwise lack of soft things, that it has particularly sparkling acoustics. If you were a musician, you would practice within it everyday, and over the years we have situated great artworks there that have been gifted extraordinary auditory life because of it: Rodney Graham singing acid country, Uri Aran gunshots, etc. etc. Indeed, even before it – the building, and we (artists, academics) were a gallery, we had a cat, who would reserve his “it must be time for a little something…” meow, until passing through the doorway into this resonating chamber, so that the otherwise gentle meow became a hollow clarion call of; “Hey, I’m ****** starving to death here!”

Where are we going with this? Well, it also seems that much of the writing that takes place, at said deck, commonly occurs, timing-wise, with the arrival of the postal service, I don’t know what or if anything this says or means (nothing probably, apart from writing is a common activity), but I have become particularly attuned to the delivery of certain items, packages, letters, given the weight of their fall and the specifics of the materials hitting the tiled floor. Literally, I can discriminate the arrival of an Artforum from Frieze – they use different weights of plastic wrapping and have distinctive densities, and contrast particularly against the quarterly, extravagant, card-wrapped quarterly Gagosian ‘journal’ (that we never subscribed to, but rather like the ratio of their galleries to international cities, just comes anyway, whether you ordered it or not.)

But there’s a new kid in town, large, soft fibrous, recycled paper envelopes, loosely filled with miscellaneous items, that has arrived with greater regularity than all the above. It’s the exciting and ever-anticipated, always challenging, Homer French care-package (sender: Jessie Homer French, born New York, 1940, lives and works [wonderfully] in rural California). Complete with her totally distinctive handwriting, a creative cluster of stampage (applied in various orientations) and an exotic ‘San Bernardino’ postmark. Contents of course vary, but may include combinations of the following: a copy of the New Yorker, complete with Posit note marking, frantic biro circlings and highlightings (all the way through it). I didn’t necessarily get the pleasure until now; with such evidently avid reading and intellectual curiosity on the other end, the great game is to go through it with a fine-tooth comb, then have an opinion upon such… and respond duly… lazy days [?] go west, but the brilliant pay off is… the arrival of the next package… with a response to the responses (and a new copy to respond to). Other inclusions; drawings [!] – amongst them, a beautiful pen study of Palm Desert, the environs of the Homer French mountain-top studio, three hours outside Los Angeles, a watercolour of a Google map of the gallery – this was promised on our summer studio pilgrimage, as something that ‘happens’ – printed scans of important moments of vintage Homer and French family life, virulent anti-Trump cartoons, and other miscellaneous political and otherwise interesting items (and indicative) thoughts. In short, or long as this is getting, the packages are a direct, hard-copy – Jessie doesn’t do virtual technology – hard-wired, doorway into the mind of Homer French, exhibiting all her interests and concerns, political, polemical, artistic and personal

The front, cuboid gallery (with good acoustics), is now dedicated to a painting about sound; Airforce (2014). Perhaps the largest Homer French – I have encountered anyway – it depicts a field of wind turbines against a cold grey sky, which itself is being violated by Stealth Bombers. The imagined constant roar of the blades, countered by a sudden sonic boom of the jets, silently fills the room. This also takes me to a neatish cross- reference, in that the Dublin exhibition, Jessie Homer French, Paintings 1978-2018, being literally that, is a parallel show to her Stealth Bomber/s, presently on show in the London gallery, and the text for which, provides more contextual and historical groundwork, leaving me freer, here to daydream. Why would we repeat ourselves? Jessie doesn’t.

The postal packages, (all neatly achieved) are arguably relative, equivalent, analogous, to entering her current exhibition/s at mother’s tankstation, Dublin, or London, in that the knowledge embedded within, has come from a deep-seated, humanistic position, so established and comfortable with itself, that it’s a little like seeing an old friend after a long time: there is so much to say but no need to actually say it.

When we first approached the difficult, and long, task of selecting and collecting the paintings from various scattered bits of America, for this exhibition, we tried to include works that would indicatively chart Homer French’s major themes over the past thirty years. Having done so, it – like an old friend – was remarkable to find that they were all bundled into her postal packages: Family; life – joy, death – sadness, friendship – pleasure, knowledge – enrichment, landscape, fishing, ecological disaster, global warming, burning, heat/flames, political selfishness, human short-sightedness, freshness, spring – gains, losses – horror, colour, space, light, solitariness, independence – pleasure to loss of, funerals, cemeteries, comradeship/companionship – animal and human, love, – fishing, trees, roots, time…

Simple is; do yourself a favour and avoid the regret of missing this show. 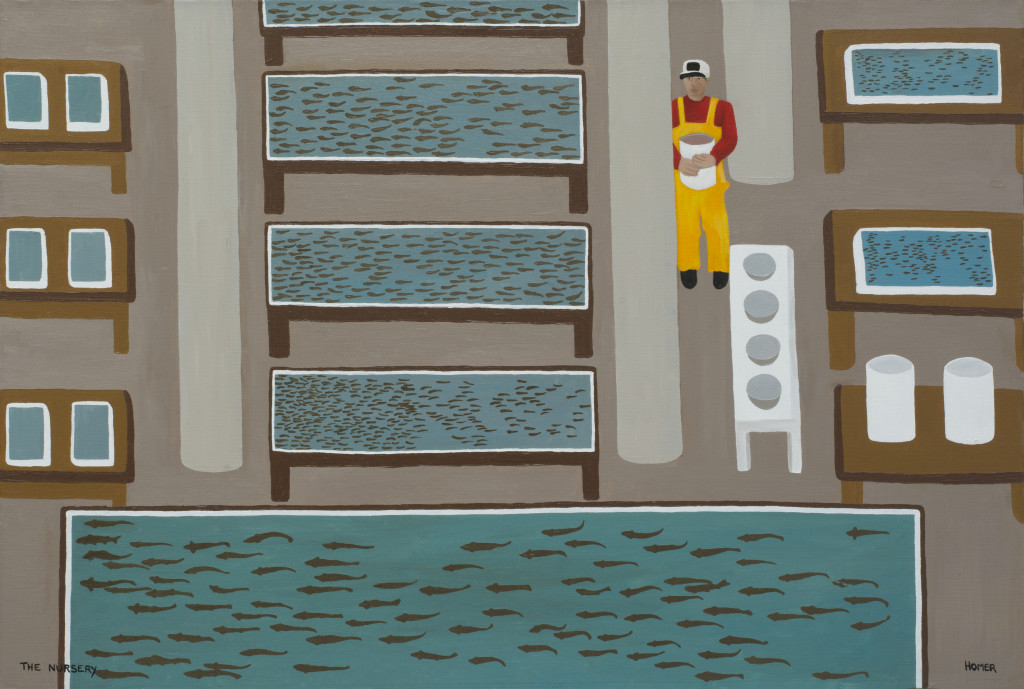 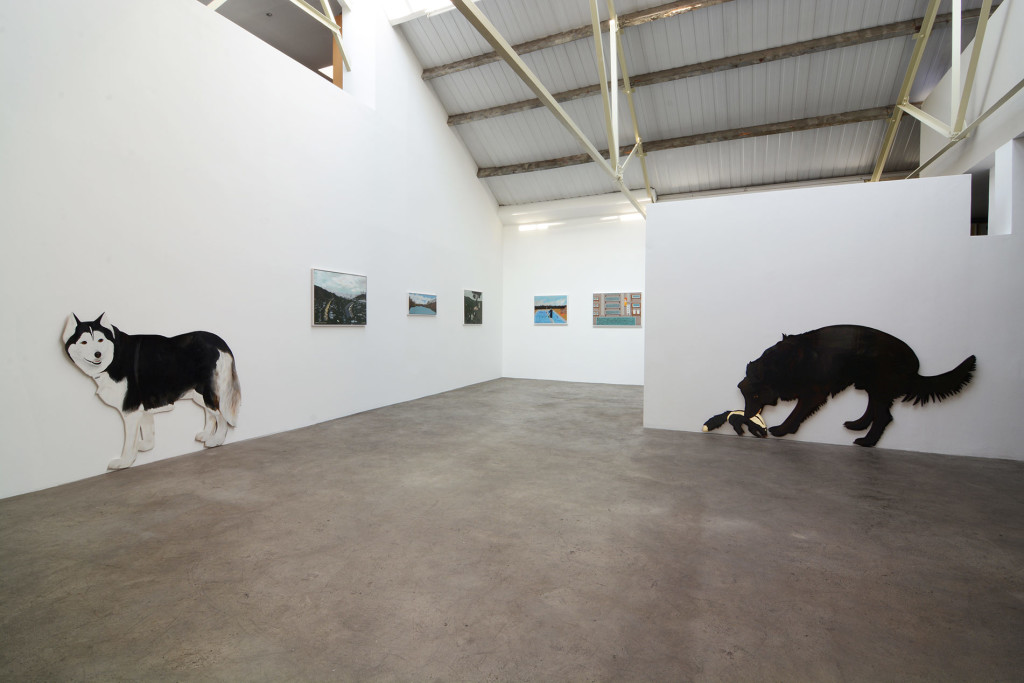 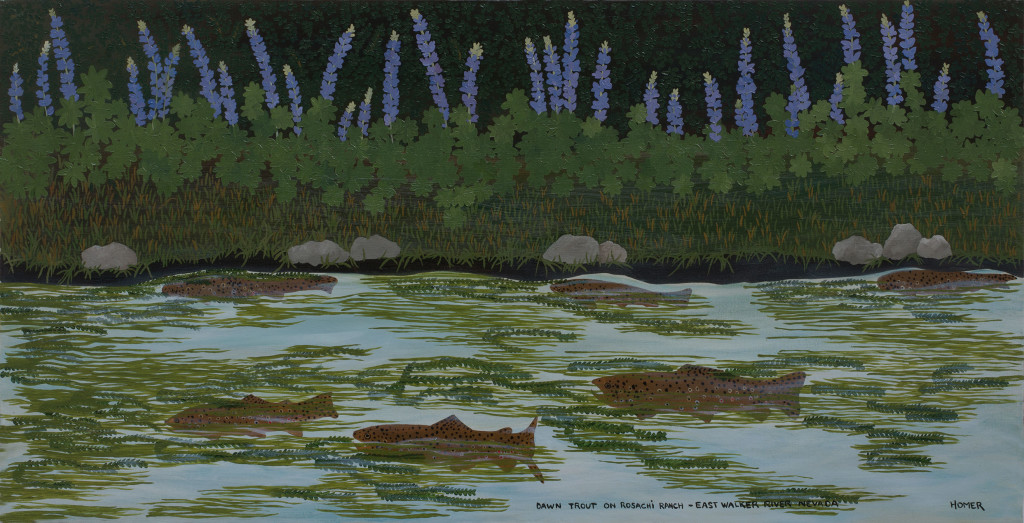 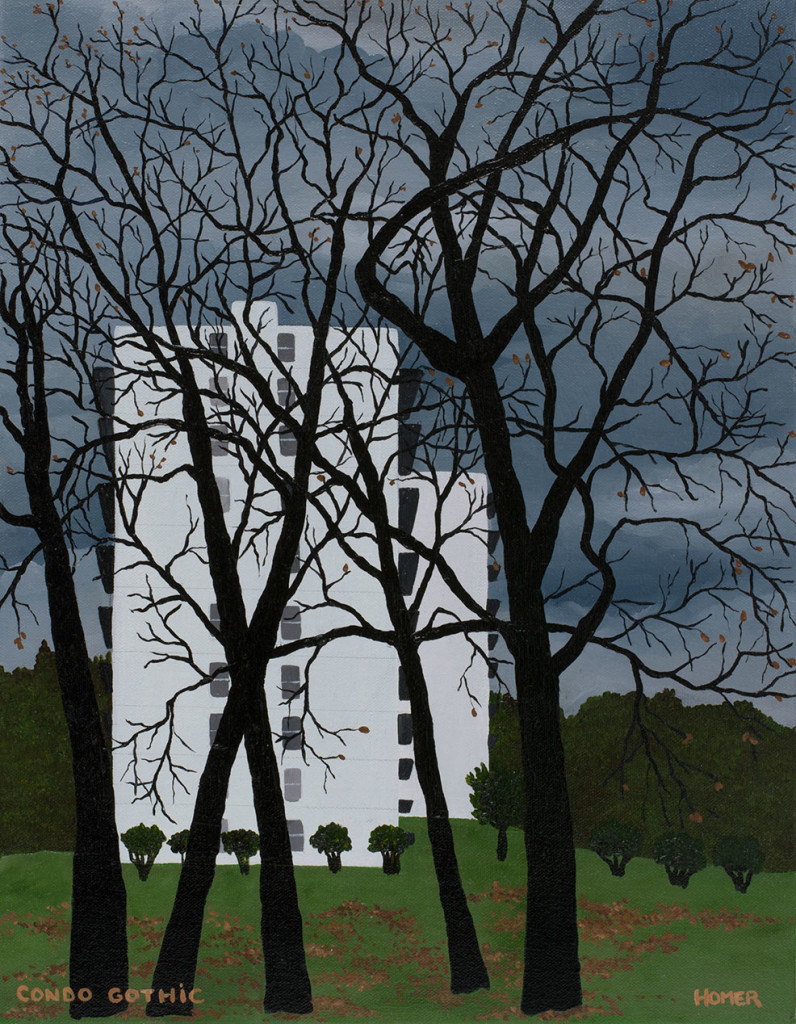 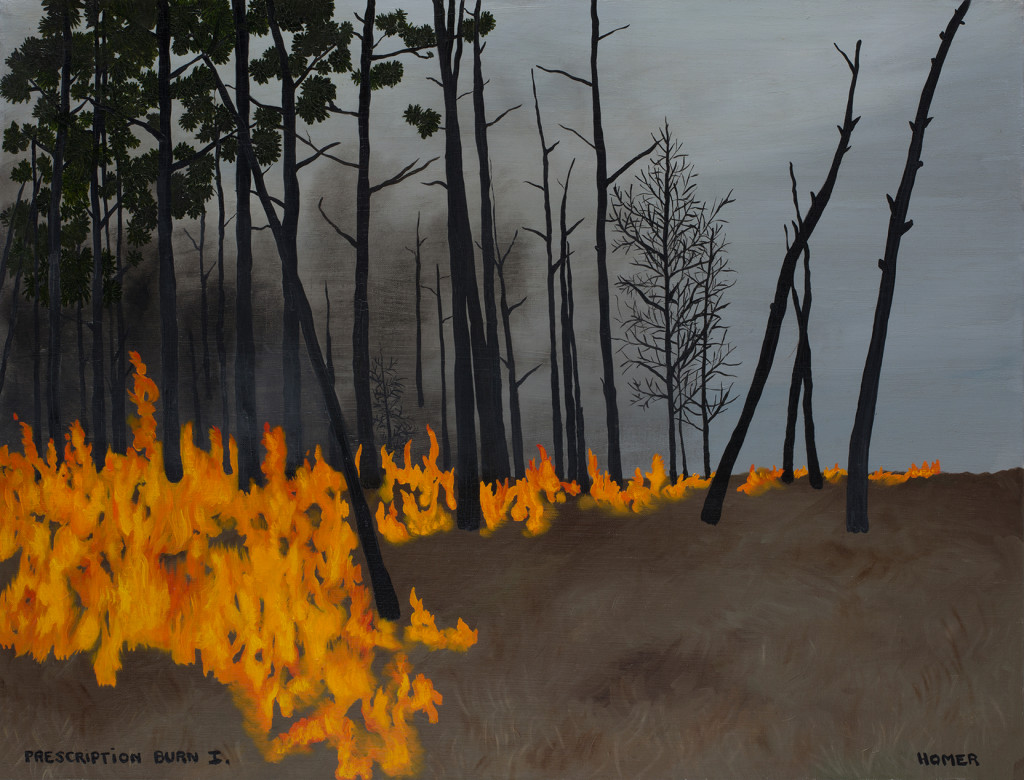 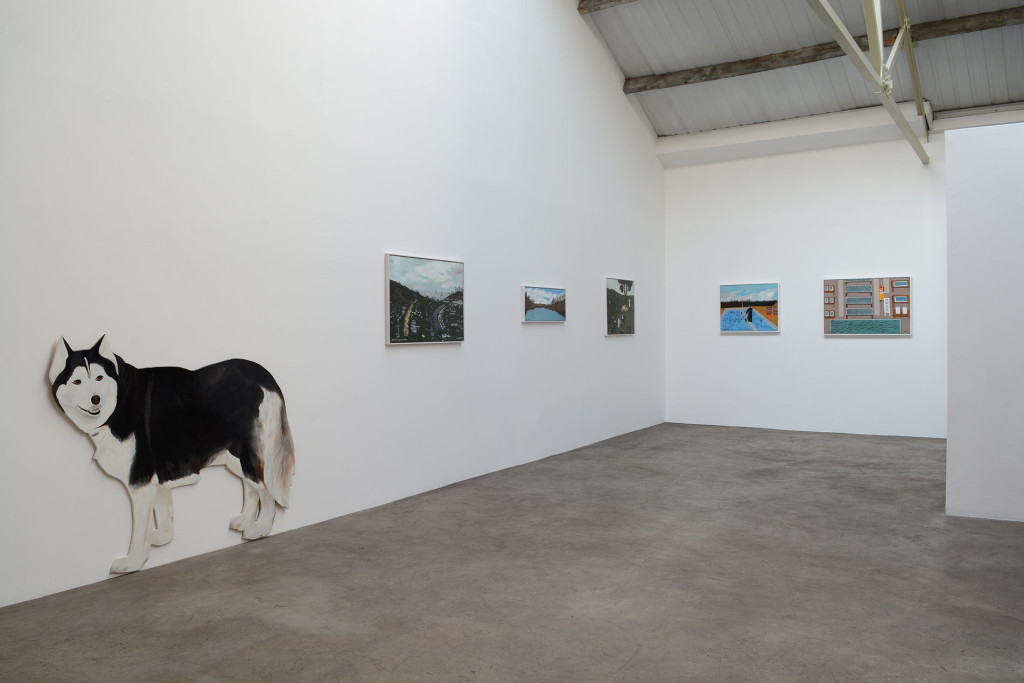 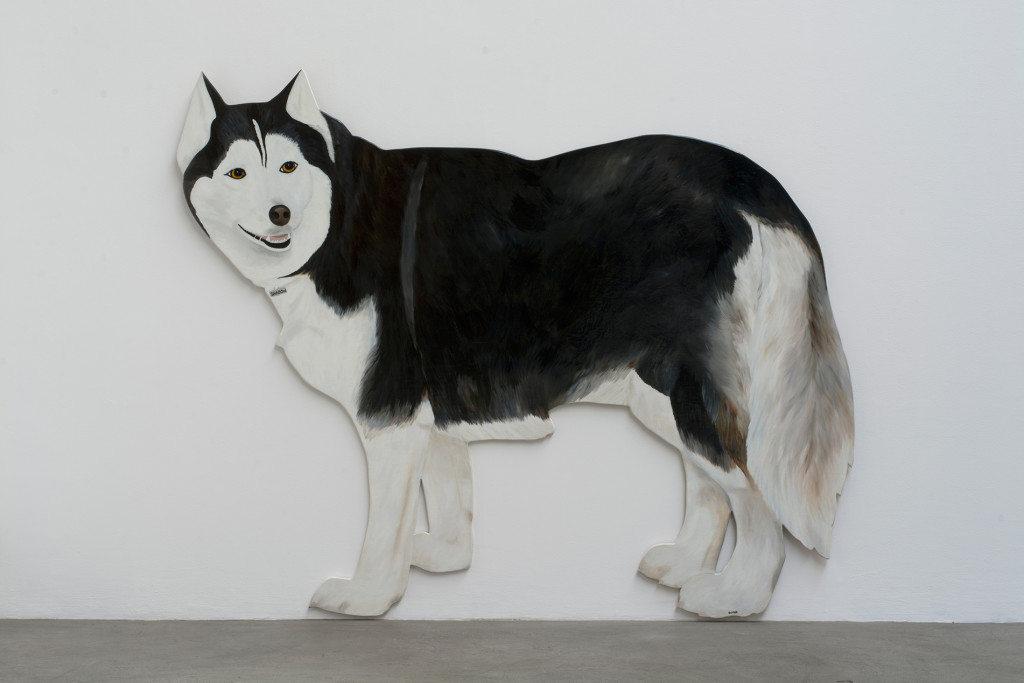 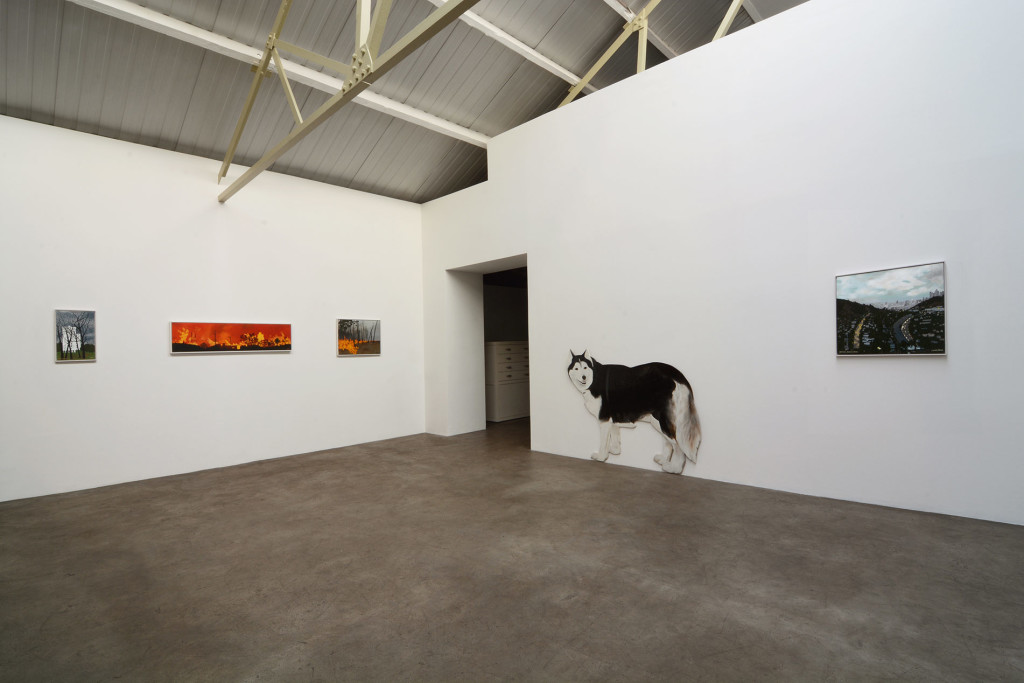 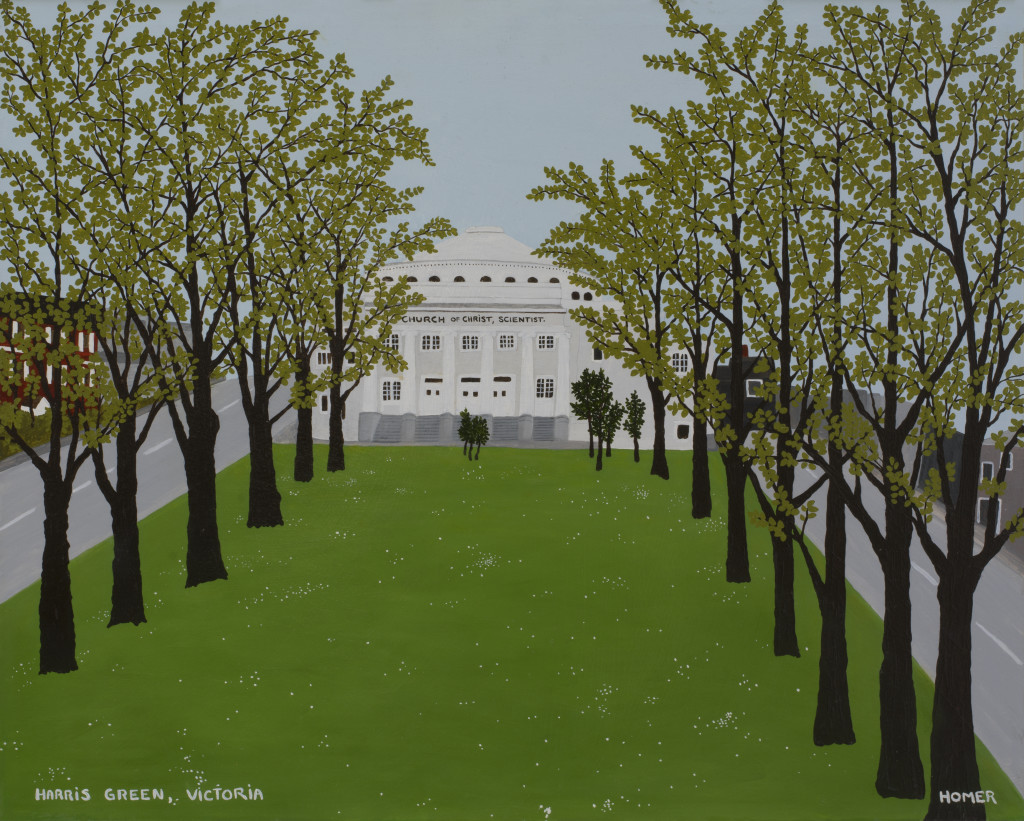 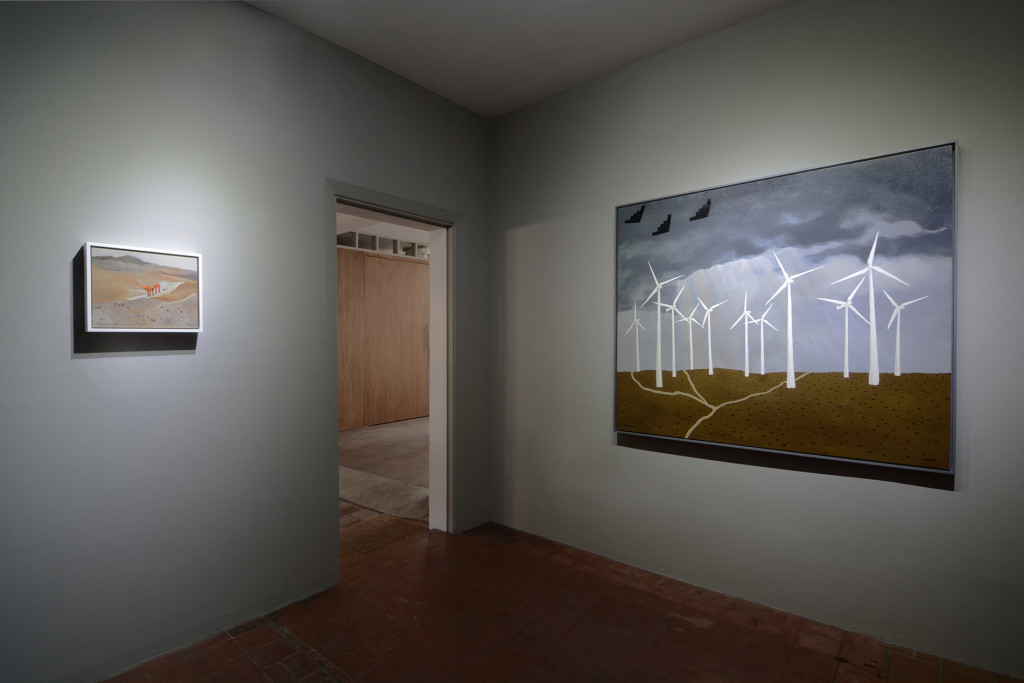 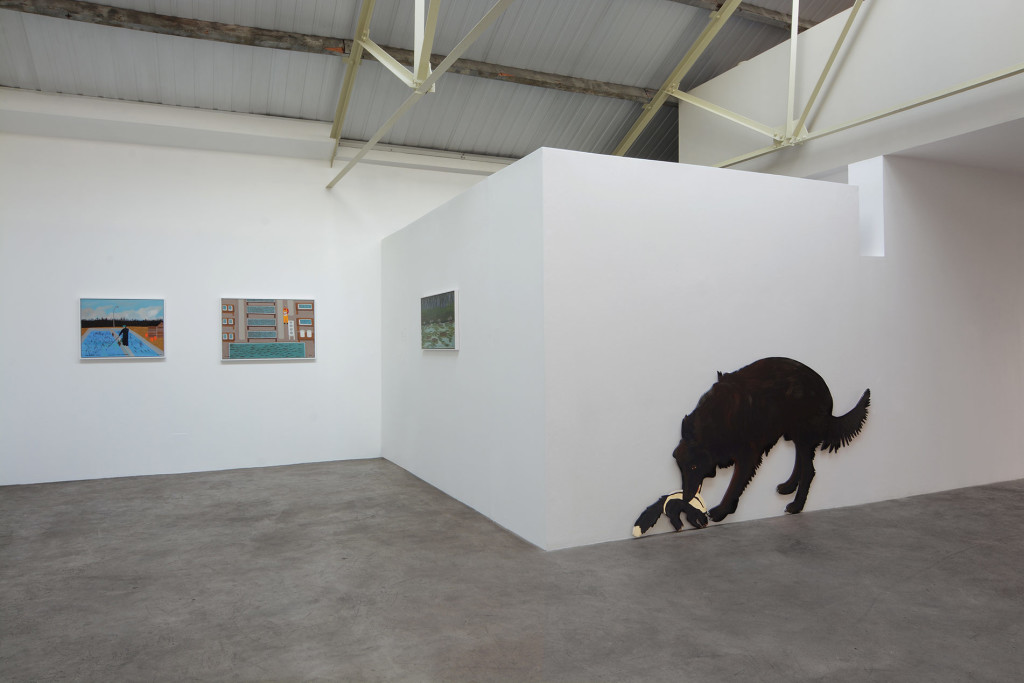 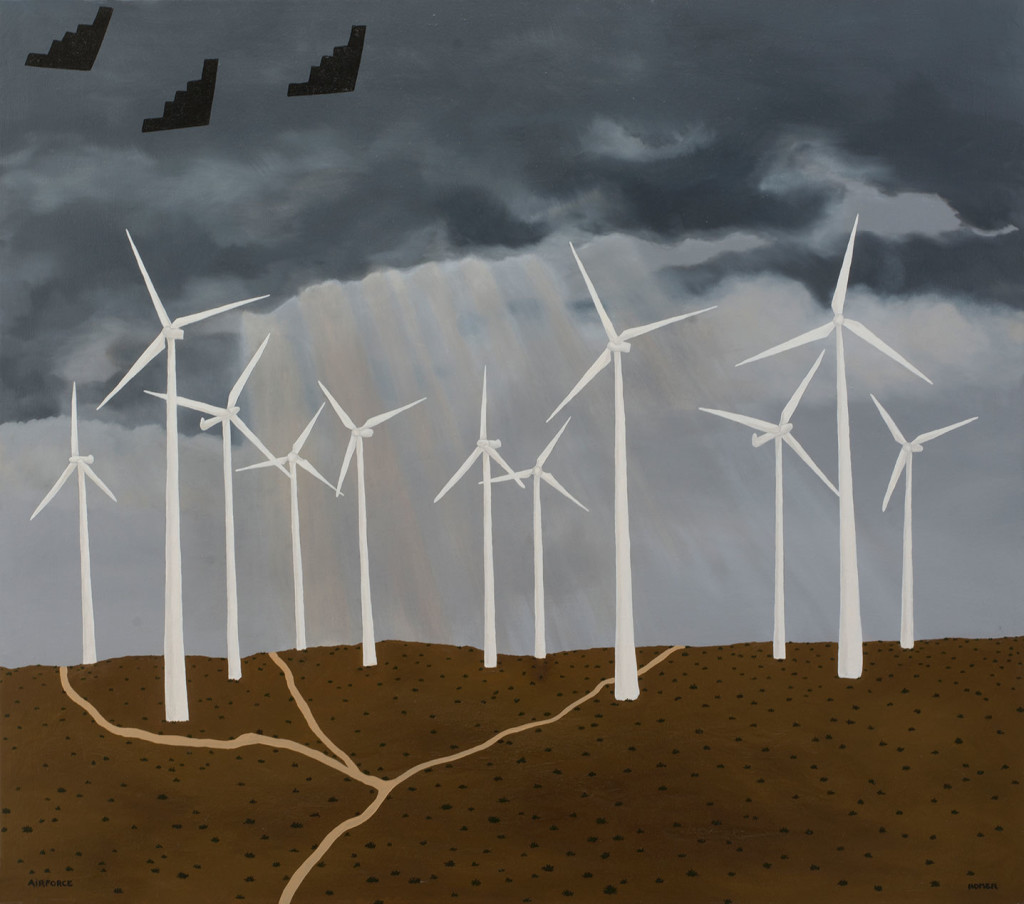 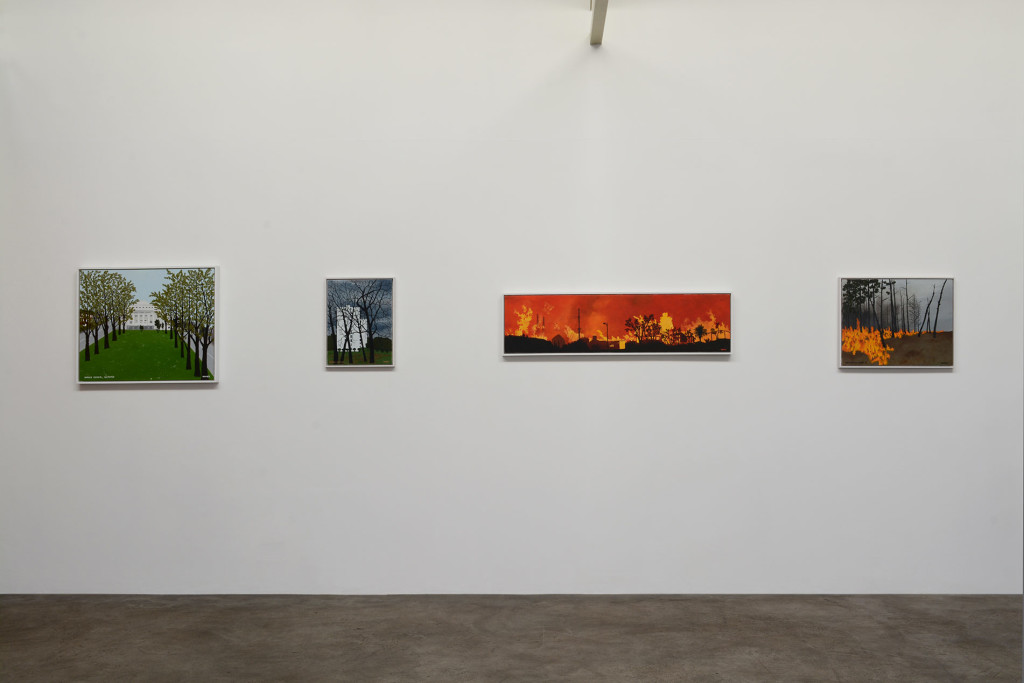 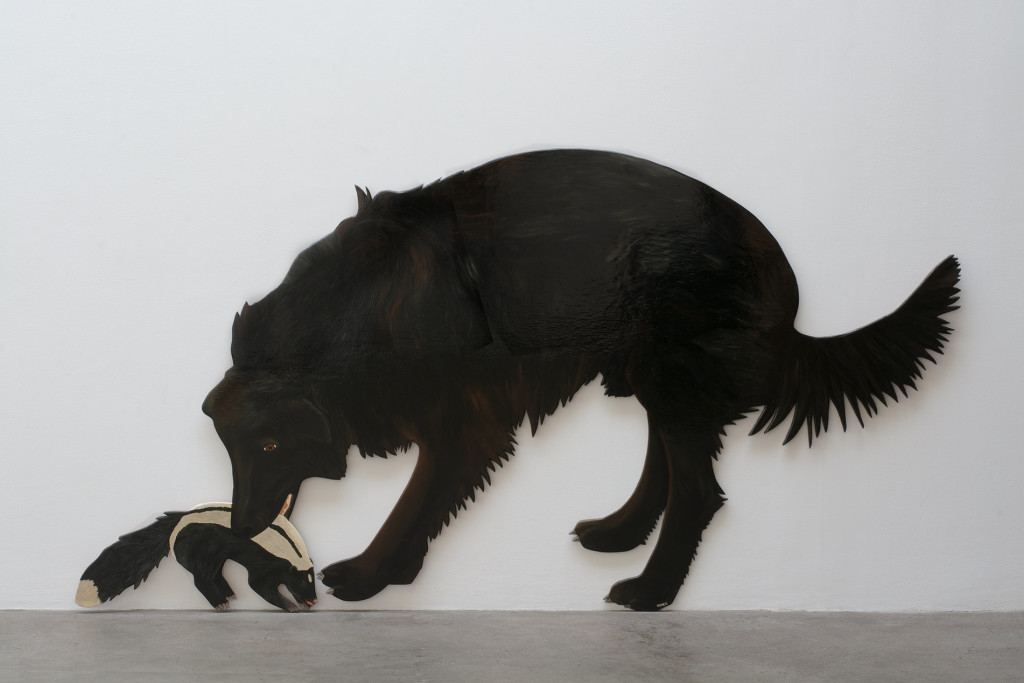 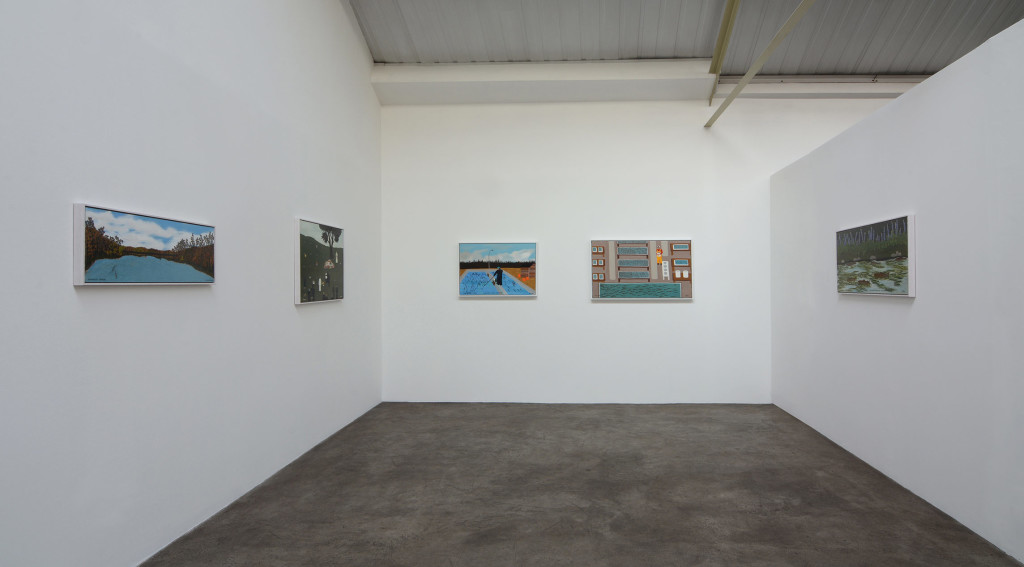 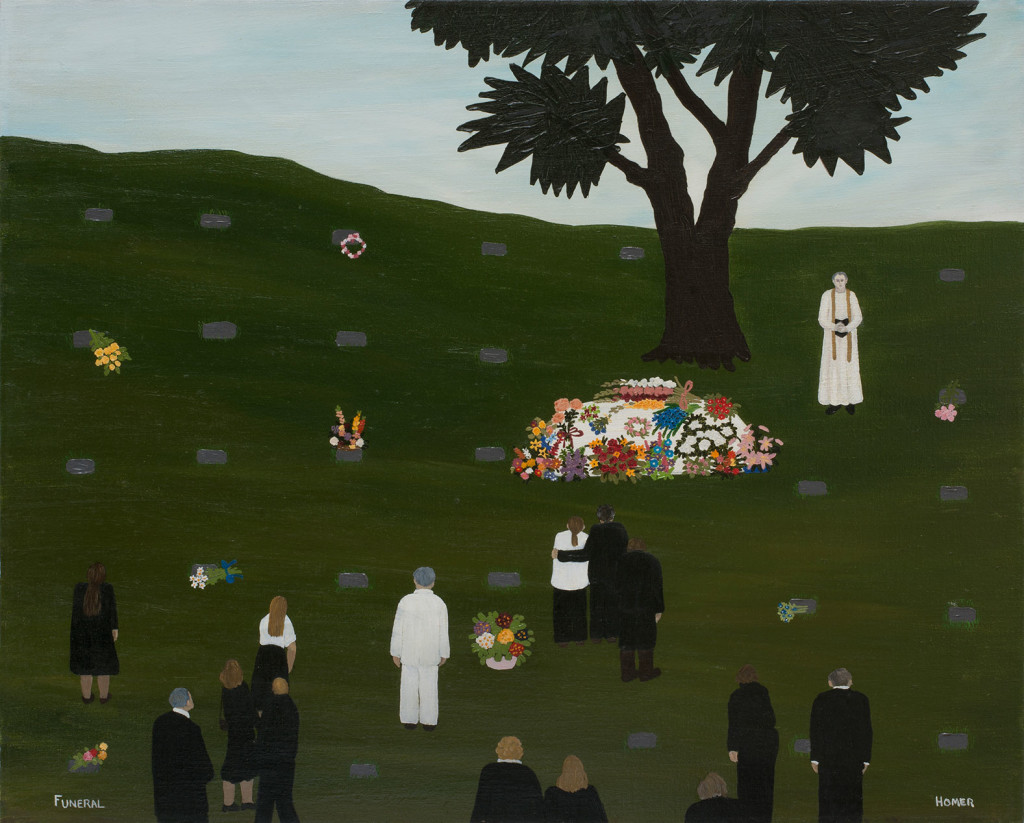 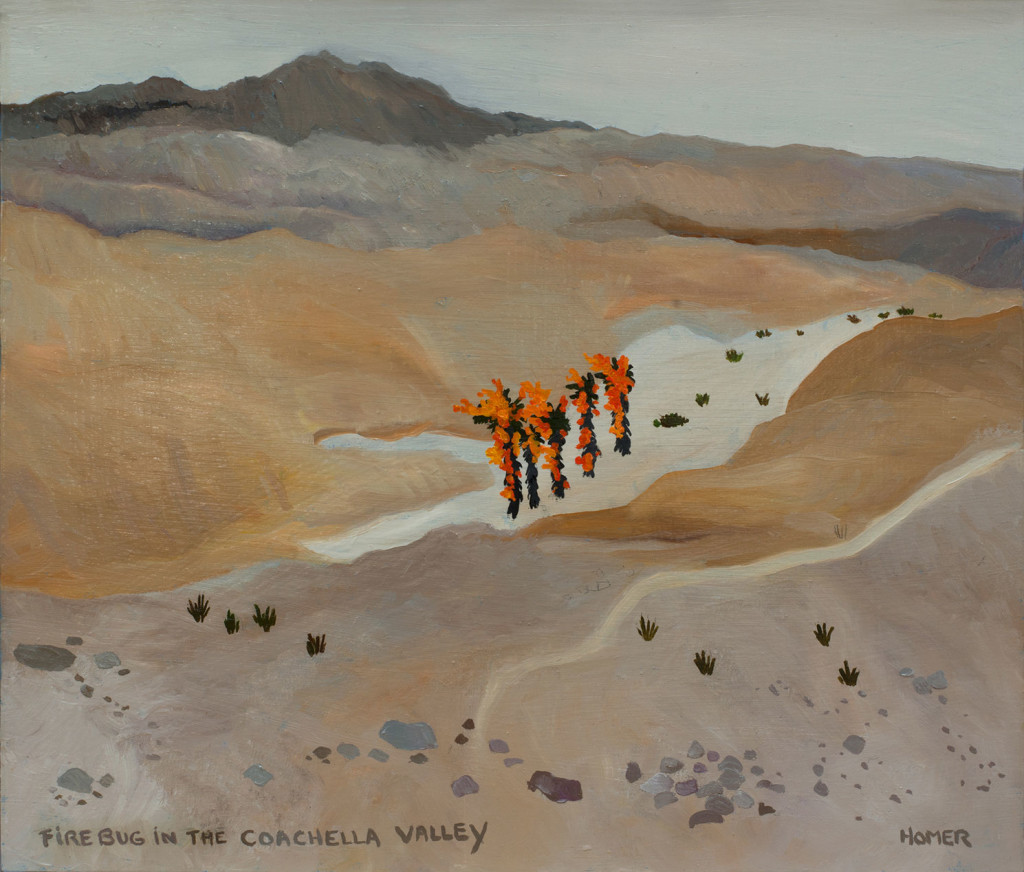 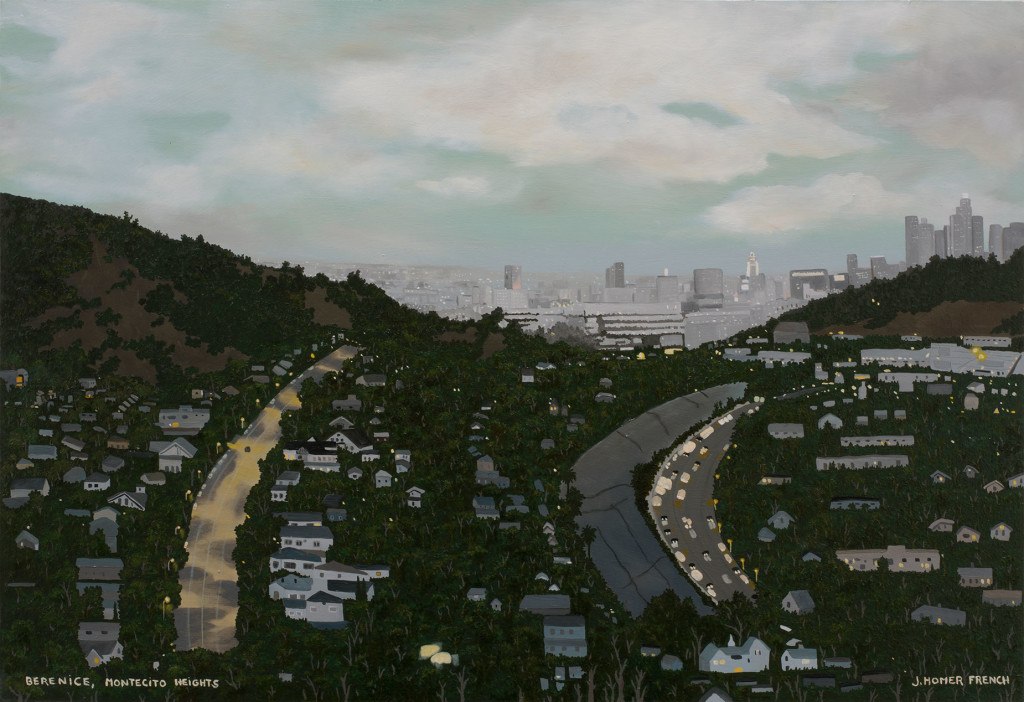