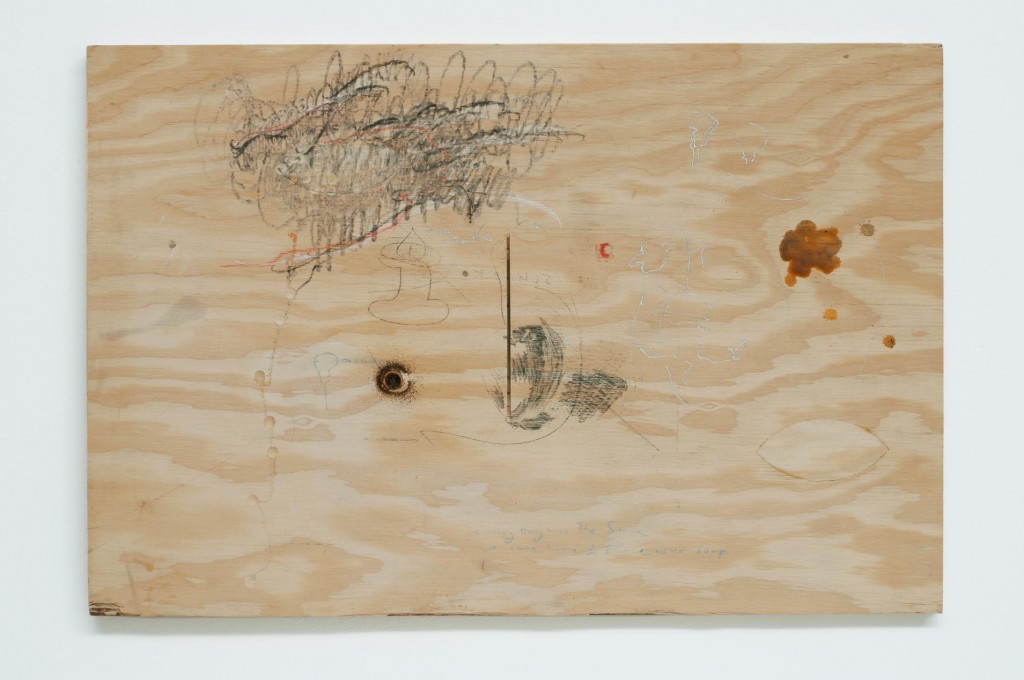 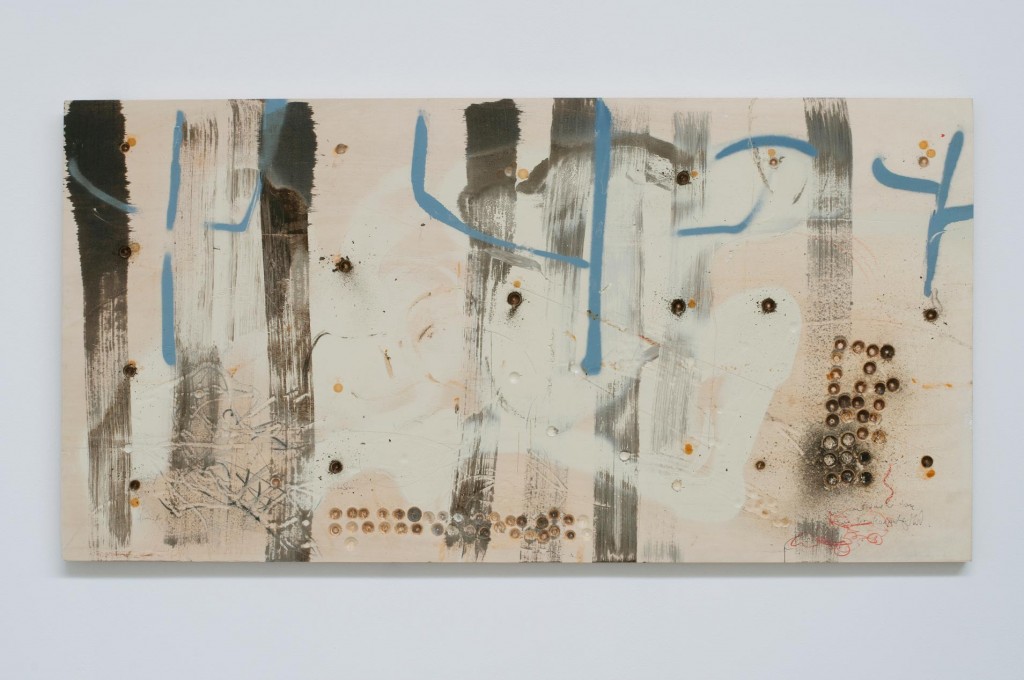 Who does all this and doesn’t ask for thanks? Who is so gloriously, so powerfully happy in himself? What is his name? Ah, I know who it is. Sometimes I’d like this Kraus to punch me. But people like him, how could they punch? Kraus only wants what is right and good. That is no exaggeration at all. He never has bad intentions. His eyes are frighteningly kind. This person, what is he doing in a world that is meant and built for empty words, lies, and vanity?1

Ones, Uri Aran’s second exhibition for mother’s tankstation, seems to seek an intellectual position or location—of twos[?]—somewhere between Irving Stone’s novelised narrative of Paul and Vincent in the ancient Roman city of Arles2; in Lust For Life3, and the clipped, fitful, faulting, re-starting, self-corrective, double-meaning (meant?) writings of Robert Walser4. Like Paul and Vincent, Lennon and McCartney (yes, they get a mention), or Jakob and Krauss,5 perhaps the show’s principal protagonists are also positioned, abstractly, between friendship and antipathy. Friends, enemies, competitively respectful, sometimes, other times jealous, “One friend better than the other”6, but all in search of the elusive emotional responses to perennial problems; the nature of one-to-one relationships, of maker to viewer, of dreams to reality, hope to despair, the paradox of creativity; dedoublement in Baudelaire’s term, epitomised in the protracted, age-old (nothing-new) search for the purpose and form of artmaking in general and painting in particular. For anyone who has not engaged in this particular, usually lonely, studio battle, rest assured of its thanklessness as tasks go. “Hmm, going to try with a little help from my friends…”7,  Aran’s video-doppelganger, Dan, marks the beat. There are no paintings here however, not formally anyway, not as we know them; no stretchers, no canvas, precious little paint even, but plywood, Formica, paper, printed marks, ‘foreign objects’ and collaged portrait heads (Aran’s characteristic photo booth images, applied to vertical surfaces),…and some paint. But paintings they are nonetheless; paintings that existentially question their own history and existence.

Despite the laconically sun-saturated video, Documentation, Circle Relieve, 20148, (an Aranesque irony of projected light into a darkened room) that literally and physically demarcates the entry point of the show while simultaneously acting as a time-sucking barrier—of Walseresque uncertainly—the show is of winter. There is something about this time of year, the darkness, cold, the sound of wind swirling outside – particularly as I sit at the desk and write this, the death of earth seems endlessly complete. Coincidences abound; Paul and Vincent fought on Christmas Eve, Walser died in a fateful snowfield on Christmas Day. The bowl of cultivated white tulips on the table behind me attests that February slowly lengthens the light and softens the stone sky that drops directly through the skylight into the space of gallery two. Painting shows, however, usually programme, like new growth, in the optimistic light of spring to early fall, but Aran’s work, notoriously hard to grasp, like Jakob’s conflicted diaries, envisages the world differently from most:

Anyway, I shall have to keep my eyes peeled. I like listening for something that doesn’t want to make a sound. I pay attention, and that makes life more beautiful, for if we don’t pay attention there really is no life.9

Grey is beautiful, frighteningly full of no life. Like Yve-Alain Bois’s division of the painting project into two camps; celebratory (manic) or melancholy (mourning)10, the contrast between the two spaces could not be stronger, hot, cool – friends and enemies – light in darkness, light tones, graced additions and small subtractions in pale light. In gallery one, only the brief night edits of Documentation, Circle Relieve, provide relief from the filmic heat. Yet the second space, the “body of work” as Aran refers to it, is quiet, retiring, distant, almost. Both however, film and paintings, are like Walser’s voice, constructed in statements that sound like questions, and questions that (almost embarrassingly) refract the infinite potential of questioning. “…which means that there is no generic answer to this question: there is no single paradigm of the apocalyptical, and no ontological inquiry about “its” tone.”11 All the works are rehearsals; new beginnings that look like reconsiderations. There’s no newness and nothing lasts. There is no time.

“I have sold my watch to buy tobacco. I can live without a watch.”12

1 Robert Walser, Jakob Von Gunten, (translated by Christopher Middleton). New York Review of Books, NY, 1969. First published in Germany, 1909.
2 A torrid nine week sojourn, ending in, or by, a frenzied razor attack on Christmas Eve, 1888, by the failed 27-year old Belgium preacher, turned unsuccessful painter, Vincent Van Gogh, on his peer and outwardly more successful artist, Paul Gauguin, in their shared quest for essential truths in painting. They rarely found points of agreement – to paint indoors or outdoors, from nature or the imagination? Following his small, self-inflicted cosmetic adjustment and subsequent collapse, Vincent (who insisted that it was no big thing!) was committed to the asylum in San Remy, where over the following months he produced some of his finest works. Gauguin remained happy to continue their friendship (but from a safer distance) until Vincent took his own life in 1890. What, have you never seen the Vincente Minnelli film?!
3 Originally published in 1934 and at five-hundred-and-twelve pages long, Lust for Life, is arguably the best known of a series of works in which Irving Stone reconstructed the lives of well-known historical figures. Coining the genre-defining term the “biographical novel,” Stone interspersed biography, history with fictional narratives and entirely speculative ideas situating the psychology and private lives of his subjects…
4 Robert Walser (1878-1956). Born in Switzerland, he left school at fourteen and led a “wandering and precarious life as a writer”. In 1933 he abandoned his essentially self-taught profession and, like Vincent, entered a sanatorium, where, unlike Vincent, he remained for the rest of his comparatively long life. “I am not here to write, “ he said, “but to be mad.” On the 25th of December 1956 he was found dead in field of snow near the asylum, an image eerily reminiscent from his first novel, Geschwister Tanner (1907).
5 ibid No1. Jakob is the eponymous narrator of Robert Walser’s early modernist novel, Jakob Von Gunten. An indolent and somewhat depraved pupil (in criticism, even described as a “naughty little pervert”) Jakob is an aristocrat who has run away from home, with no stated reason, to enrol in the Benjamenta Academy for good servants. His impish diary/journal entries alternately appear to idolize and despise his classmate Kraus.
6 From the audio of; Uri Aran, Documentation, Circle, Relieve, 2014. (See No.8)
7 Lennon/McCartney, © Sony/ATV
8 Aran’s film was originally conceived and filmed during; to the moon via the beach, at the LUMA Foundation, Arles. Quoting from the forward of the recent publication of the same title:  the “multifaceted artistic projects…explore the possibilities of its new campus in the parc des Ateliers, d’Arles, designed by the [LUMA] Foundation in conjunction with the artists Liam Gillick. Philippe Parreno the curators Tom Eccles, Hans Ulrich Obrist and Beatrix Ruf, the architects Frank Gehry and Annabelle Selldorf and the landscape designer Bas Smets.”
9 ibid No 1, pg 50
10 Yve-Alain Bois, Painting as Model, An October Book, The MIT Press, Cambridge, Mass, & London. 1993. Pg 229
11 ibid
12 ibid No 1, pg 50 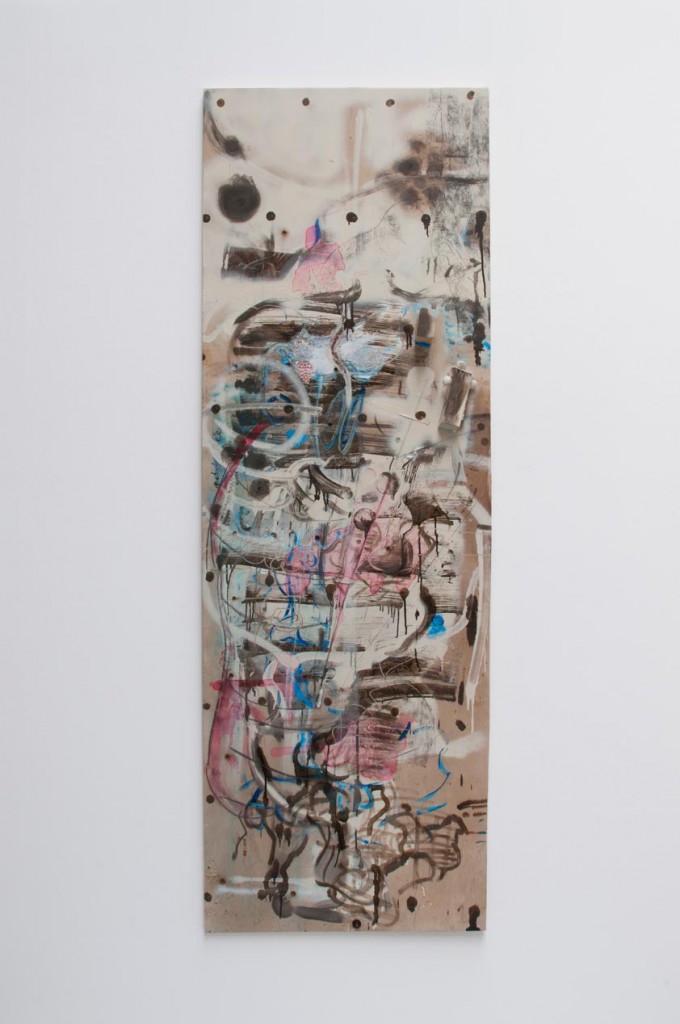 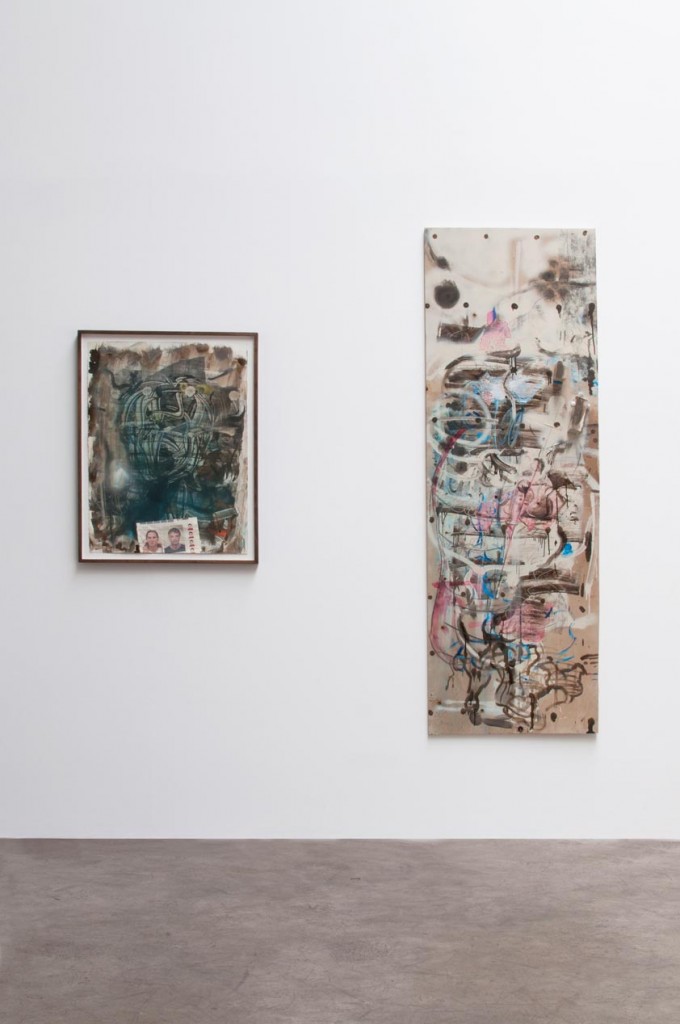 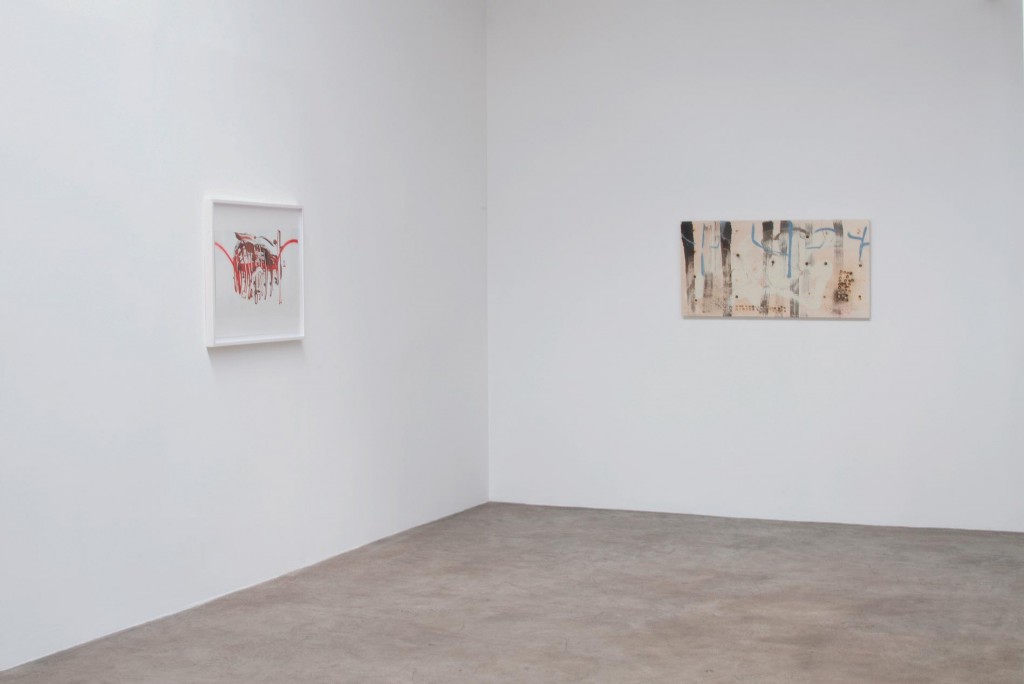 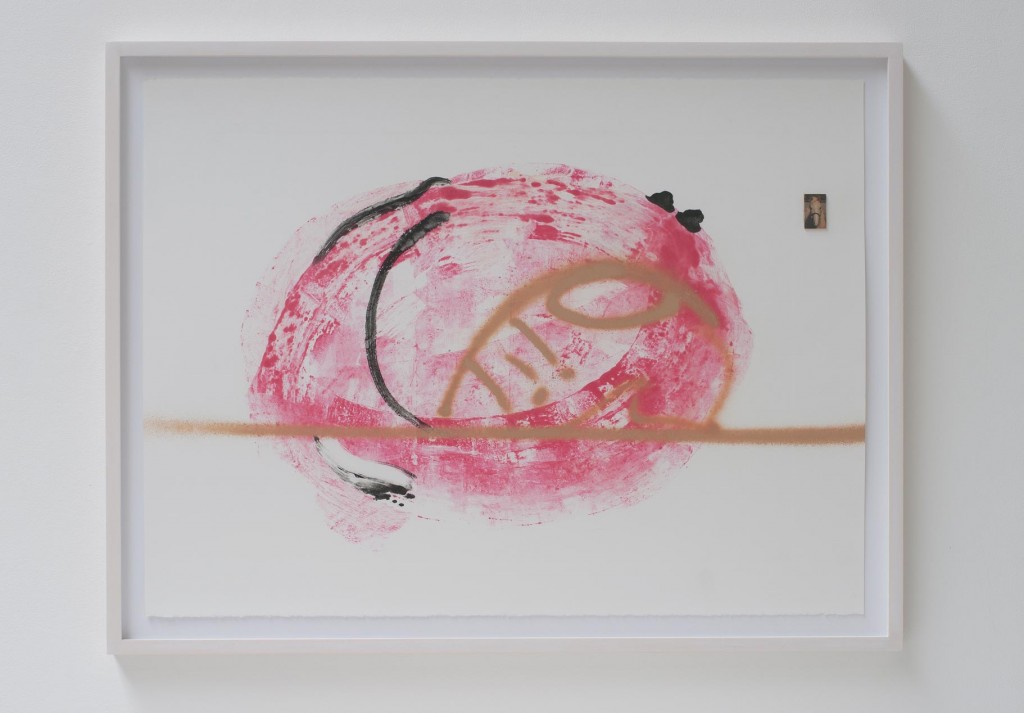 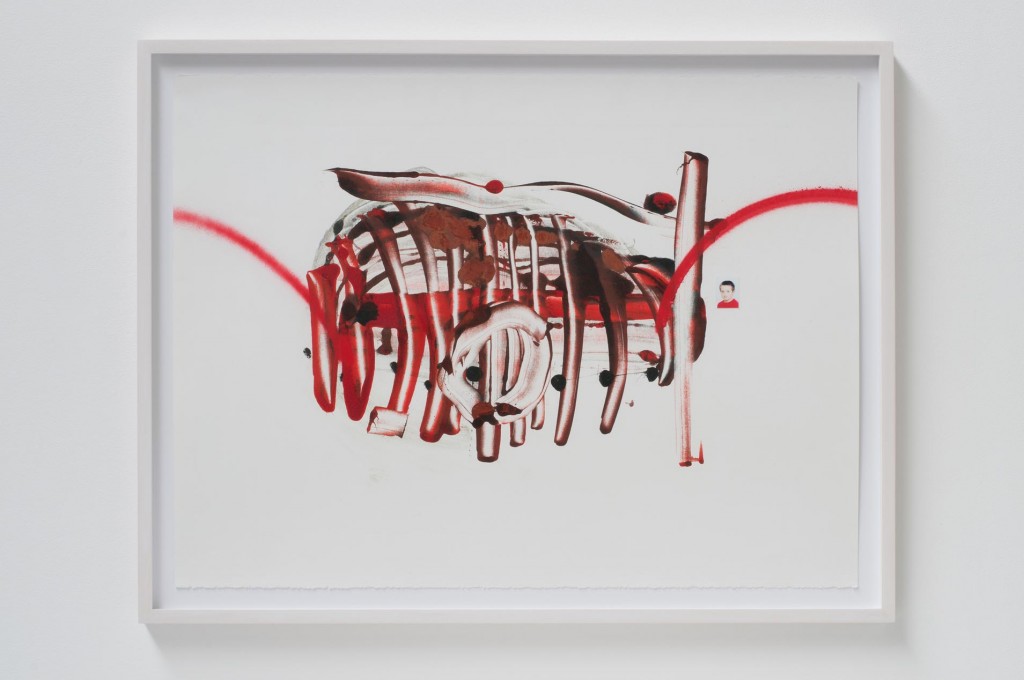 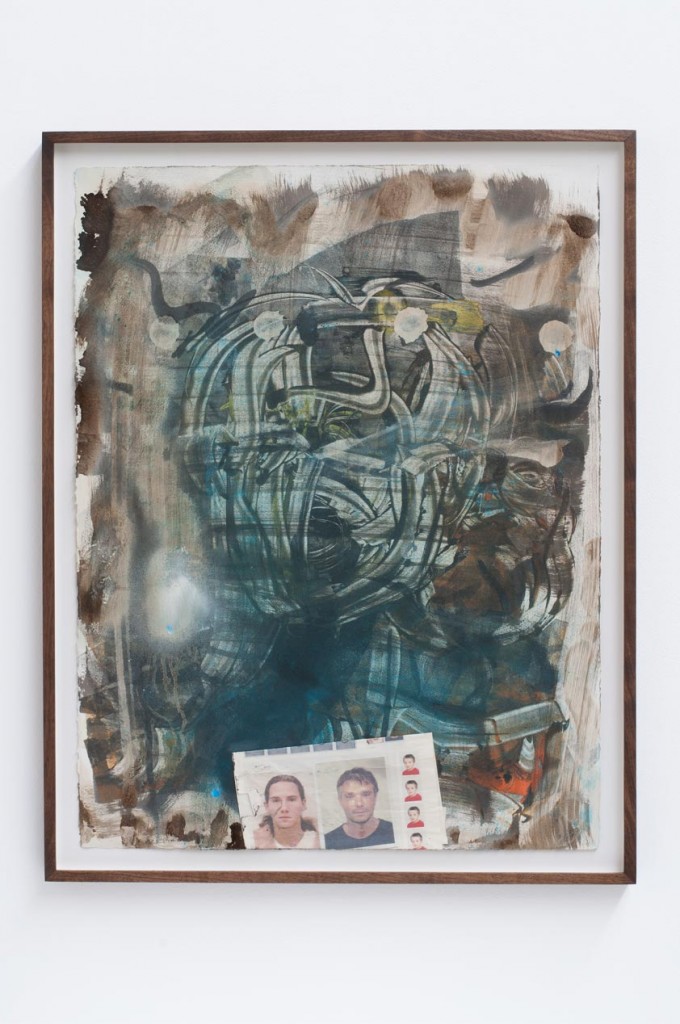 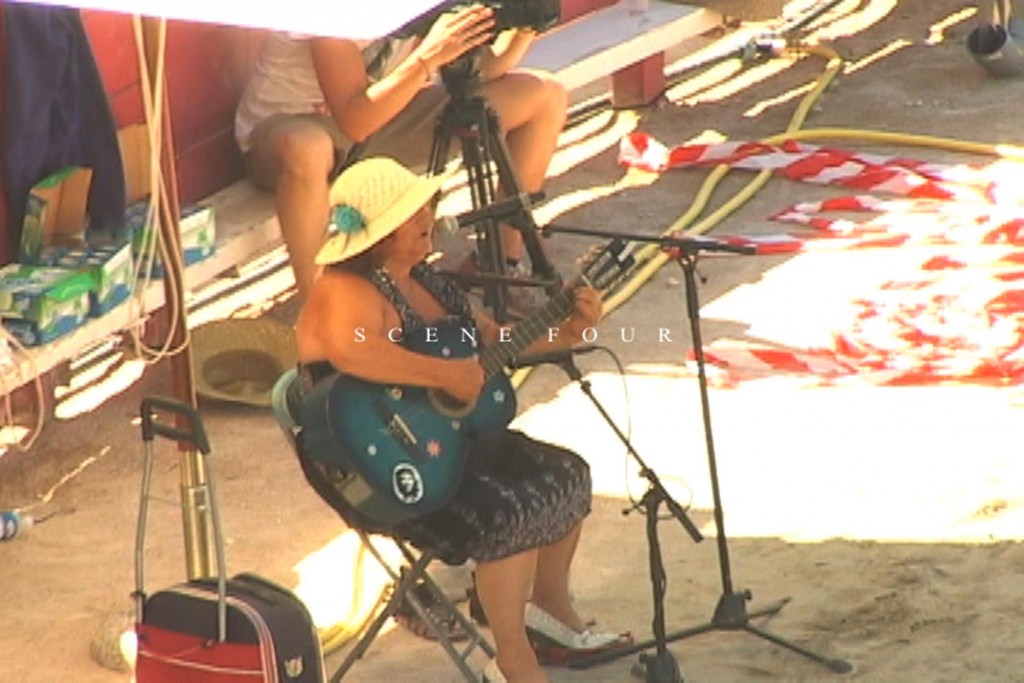 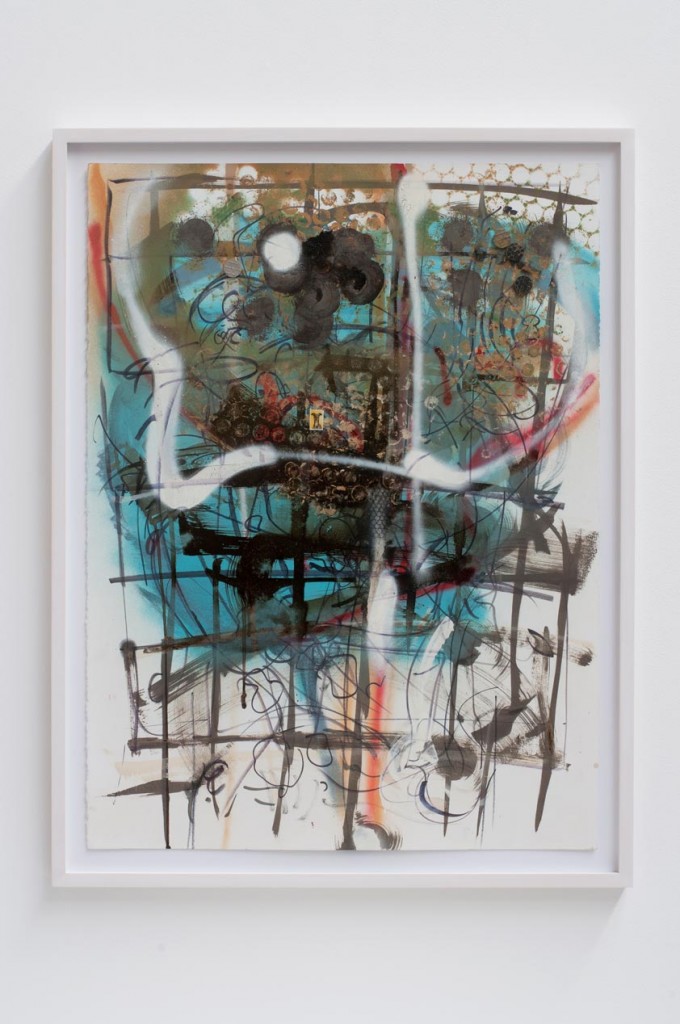 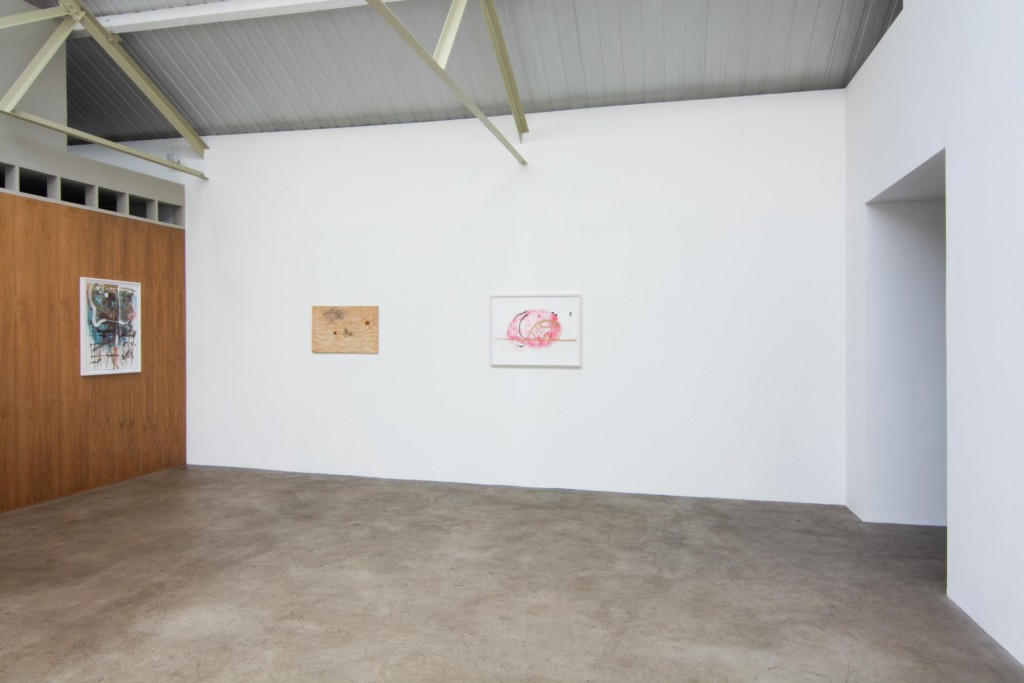 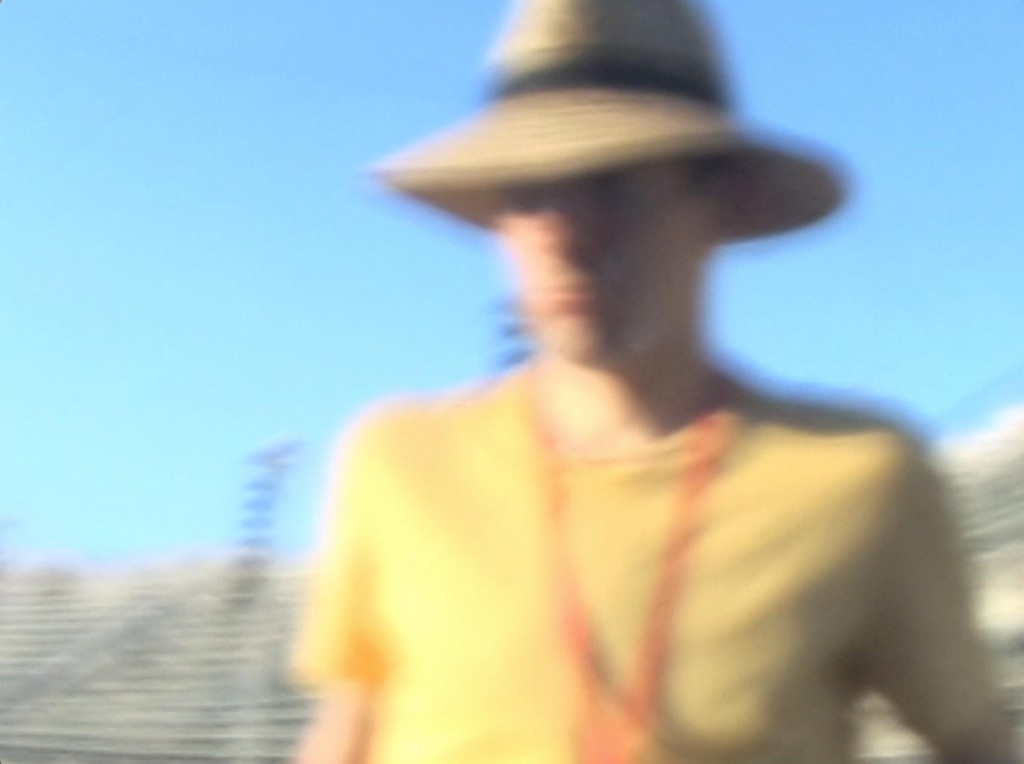 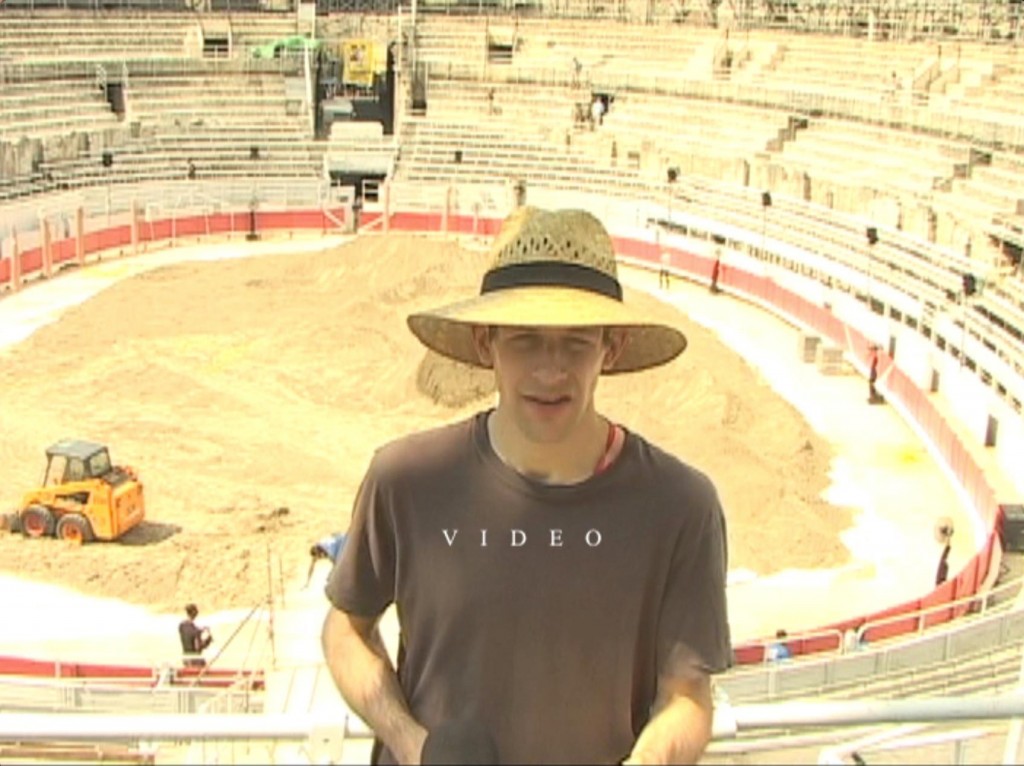 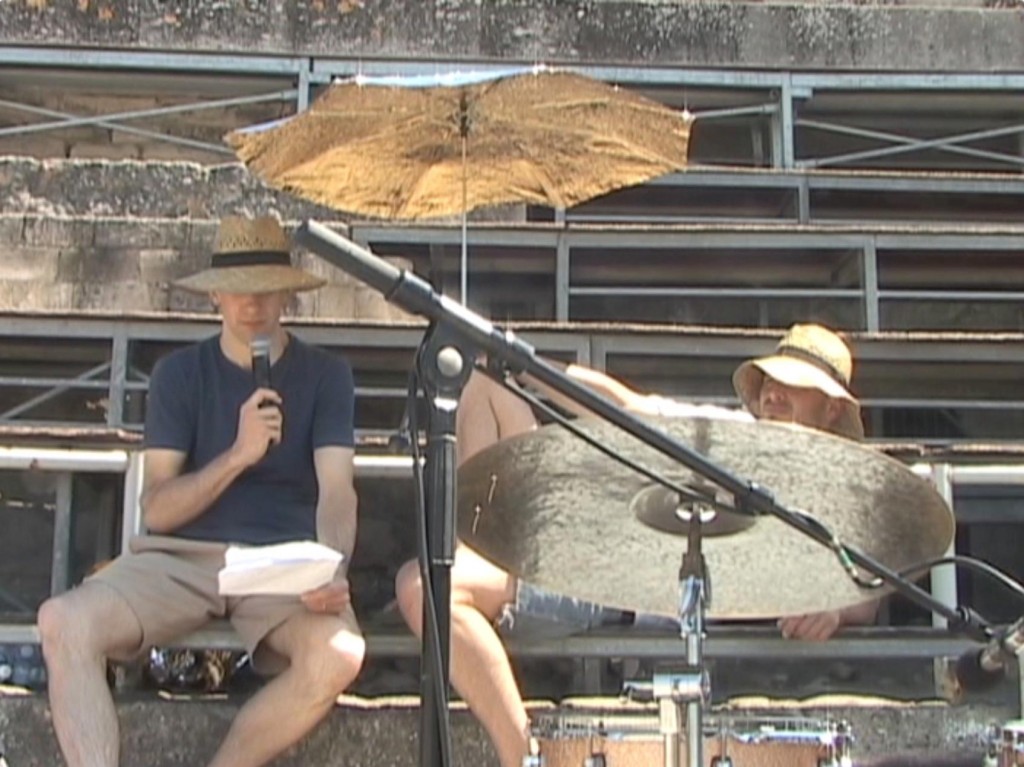 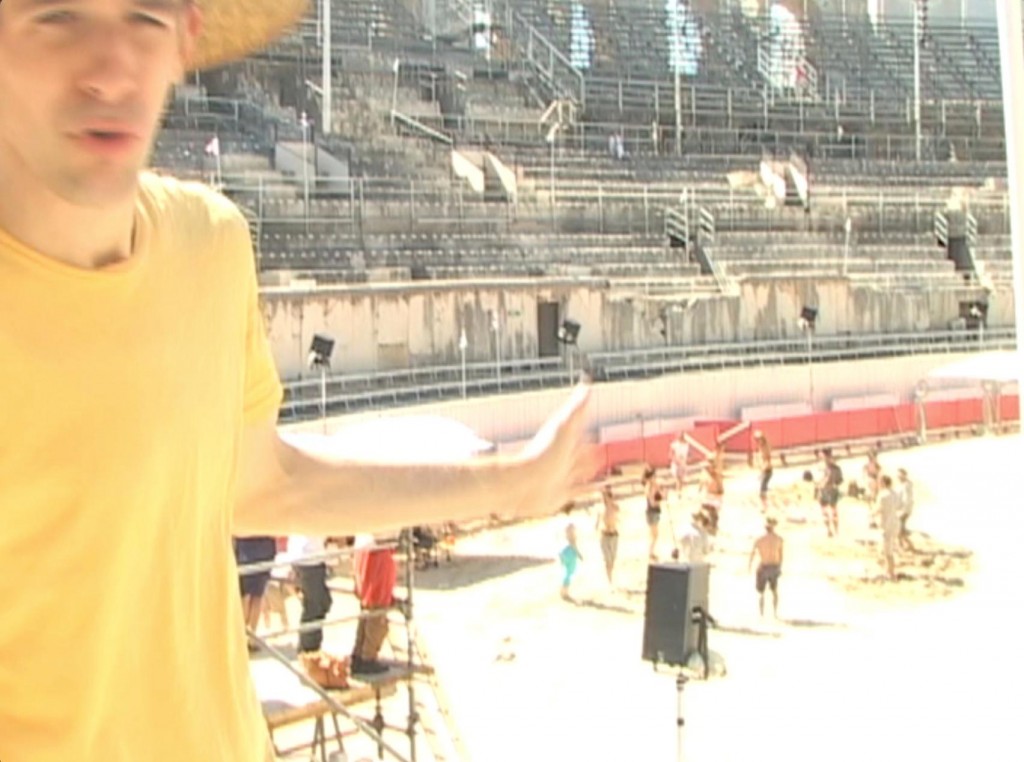 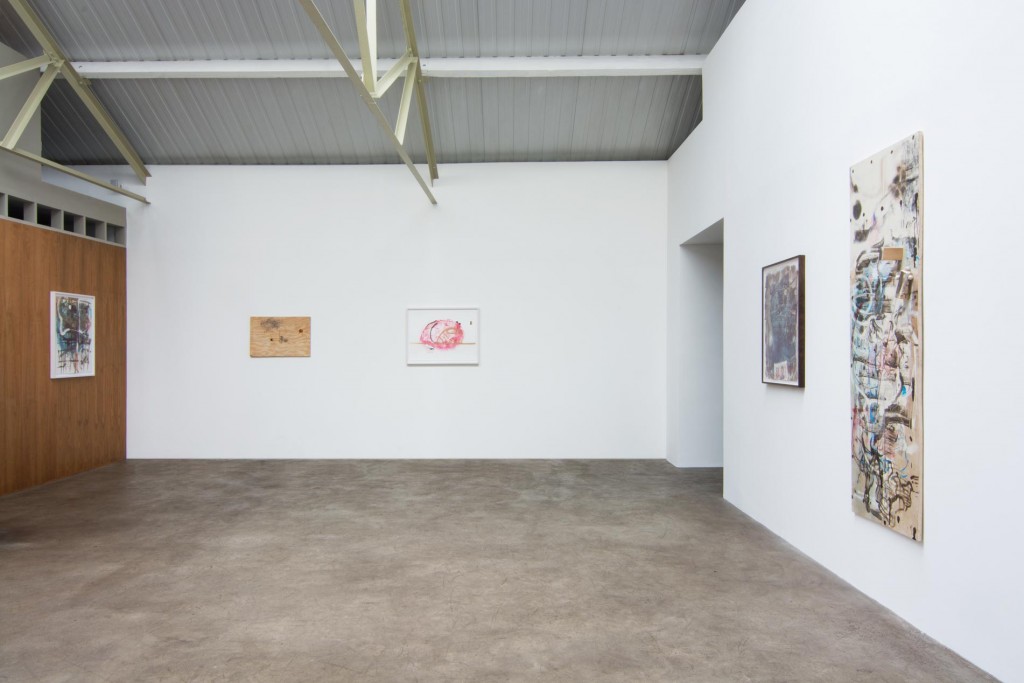