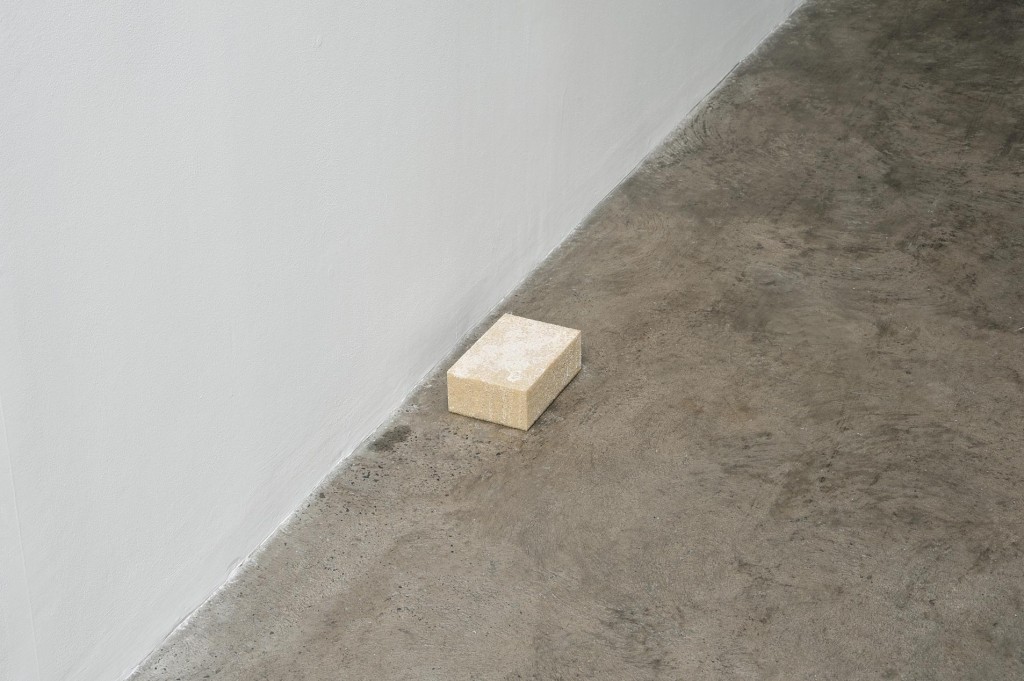 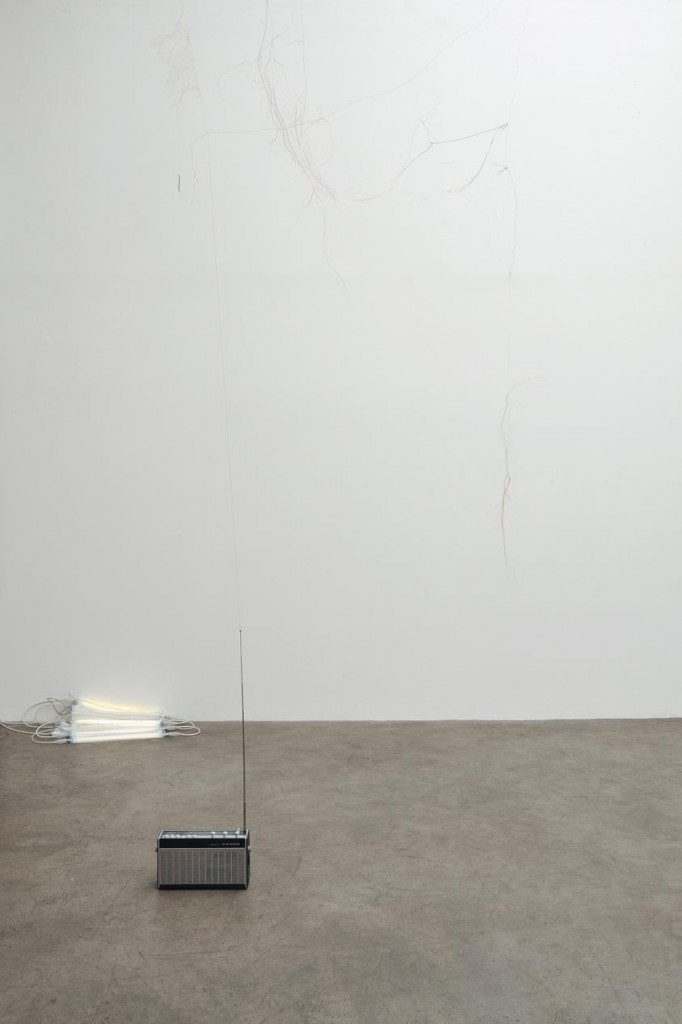 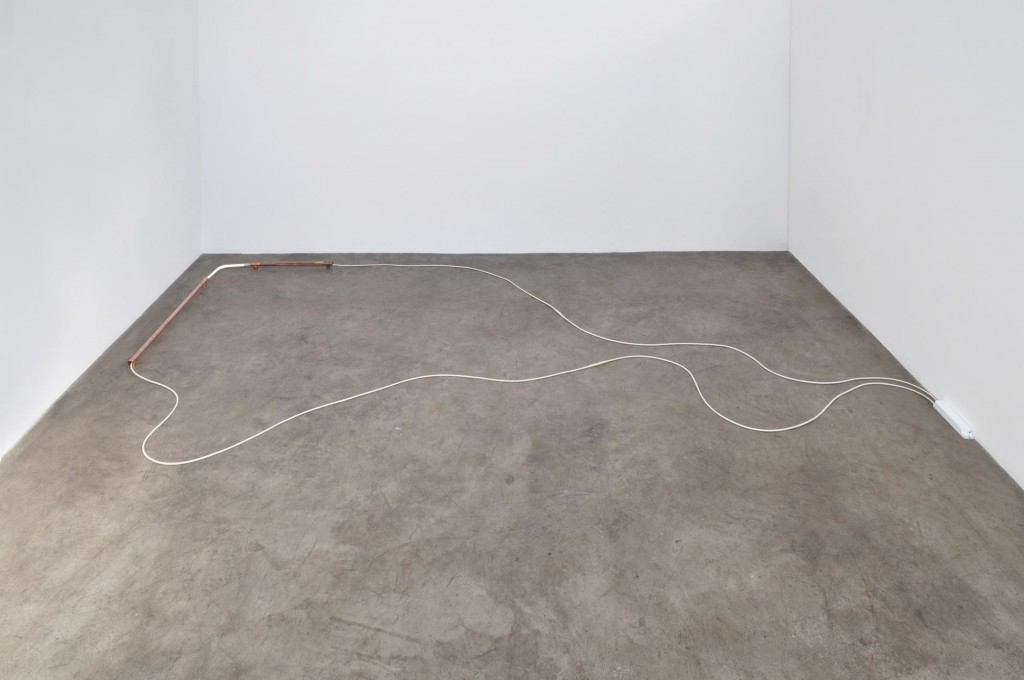 Listen to the bonds fall off which hold you above and below, Guillaume Apollinaire, 1918

First energy, second heat, third water: O Little Drops, Nina Canell’s third solo exhibition made specifically for mother’s tankstation, bears witness to the single-minded focus of her work from its very outset.1 With its recurrent attention set upon the themes of energies and forces, both visible and invisible, water has long been a preoccupation, with numerous and significant pieces that have explored its essentially differing forms and potentials: solid, liquid, vapour, life-giving, imprinting, eroding, soothing and wildly destructive.2 Such pieces as Shedding Skin (perpetual current for twenty-four buckets), Perpetuum Mobile (283 Stone) and Anatomy of the Rising Tide, are historicised in international exhibition record. Half the pace of a given place, one of her earliest works, from the first mother’s exhibition (hers and ours), employed water as a weight, while Thermal Mass,3 from her subsequent show, submerged a red emergency light in a small pail of water.

At a point when we had still not seen the new work for the coming show, we requested a couple of pointers from the artist to help direct us in formulating a text.4 Two enigmatically reductive ideas arrived. Firstly, a single line of poetry, re-composed (“…above”) horizontally, rather than in its original downward-flowing, vertical form, extracted from Apollinaire’s 1918 Calligramme, il pleut (quoted complete, “… below”.5 I should note that ‘altitudes’ and gravitational pull might be considered as other substantially dominant and reoccurring themes in Canell’s work – “and the bonds fall off that hold you…”). And the second, the even more elusive suggestion of “less heat, more moisture”, scribbled on the back of an exhibition checklist at the end of brief meeting in Minneapolis, itself home to the great Mississippi River (then frozen) and her first solo American institutional exhibition. Hydrology may concur with Canell’s notion, but might incline towards a reversal of emphasis, more heat less moisture, as heat acts positively upon the mass of water, turning it into vapour. In Canell’s version, the absence or negation of event merely allows the constituent element to linger longer. Less heat does not, of course, increase the volume of water, but allows it to pool, as the coolness upon the surface protects its mass. Too much cold, of course, makes it almost a dangerous, slippery rock. Thinking about water, thinking about ice, thinking about a falling tear…

The enigmatic, multi-talented and social-media-friendly Canadian astronaut, Commander Chris Hadfield, recently tweeted a YouTube video, Tears in Space (don’t fall)6, apparently dislodging the central Newtonian axiom that anything that has risen or been raised up must eventually fall or return to earth. In a concise and playful pedagogical staging from onboard the International Space Station, Commander Hadfield illustrates that tears (here faked for ‘demonstration purposes’) exclusively form as “balls of water”, that drift around and just get inconveniently bigger the more an unhappiness expresses itself physiologically. Eventually, the evaporation process might occur, but given the cold that permeates two hundred and twenty miles above the earth, this is not going to happen in a hurry (the surface protects its mass). In the meantime, any such human unburdening leaves its physical evidence as a floating pool of salty ‘emotion’, biding its time, until the entire space station returns to earth, one way or another (along with the ‘fallen tear’). Perhaps even in space you can’t entirely escape the ‘altitudinal’, Newtonian law. Alternatively, absorption is always a practical solution to an unwanted moisture issue, and one that Canell enacts in the gallery, with the presence of numerous dishcloths, laid out, flat, like fragments of non-objective paintings, gravitationally repurposed for the floor. Thinking about crying, thinking about cold, thinking about gravity…

Thinking about something, thinking about anything, makes me think about thinking about things? Gaston Bachelard notes the meditation upon a ‘thing’ is much like slipping into a daydream, in that you are subconsciously aware that you are in ‘it’, yet simultaneously uncertain why you are in it, exactly where or how it began, and where it is liable to lead or end. Perhaps the state of “intimate immensity”, as he describes it, is a productive state in or from which to ‘think’ about Nina Canell’s work?

One might say that immensity is a philosophical category of daydream. Daydream undoubtedly feeds on all kinds of sights, but through a sort of natural inclination, it contemplates grandeur. And this contemplation produces an attitude that is so special, an inner state that is so unlike any other, that the daydream transports the dreamer outside the immediate world to a world that bears the mark of infinity.7

Like Bachelard, like Apollinaire, Canell thinks about things outside of – or aside from – orthodoxy. Her visual ‘syntax’ alights gracefully upon lumpen (in the sense of dispossessed or uprooted) things, plumbing accessories, for example. Which in her hands are made to seem as if they are the weightless, phenomenological or philosophical expressions of much higher, but passing notions, elusive fancies that float away, like tears unfettered in space, free from the usual sorts-of-laws that bind us clods of earth (to earth). Forces that impact upon the expectations of material and rational behaviours are lightly brushed aside, the weight of a water drop seems equally light, or heavy, as a little lump of concrete, a ball of chewed-up gum or a hanging ‘droplet’ forged from iron. Having evaporated things with the heat of thought, a cohesive stain remains, a pattern (a memory of thought), while a cloud of impending meanings, a reservoir of other, many more unspoken but potent thoughts, forms above, waiting to rain down. Pooling, floating, eventually evaporating, rising again. 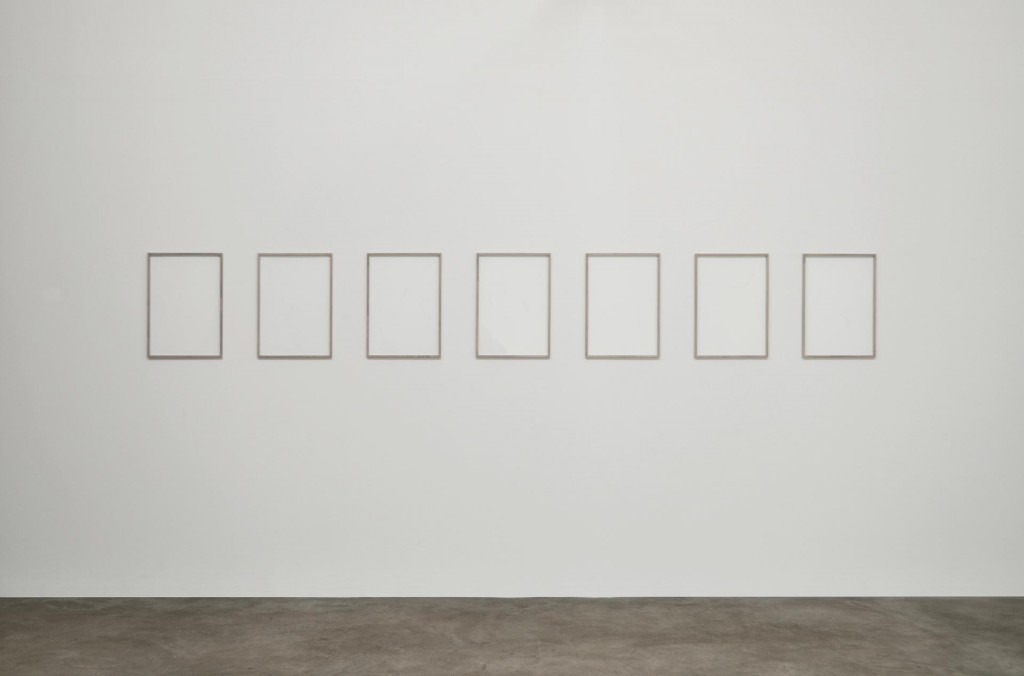 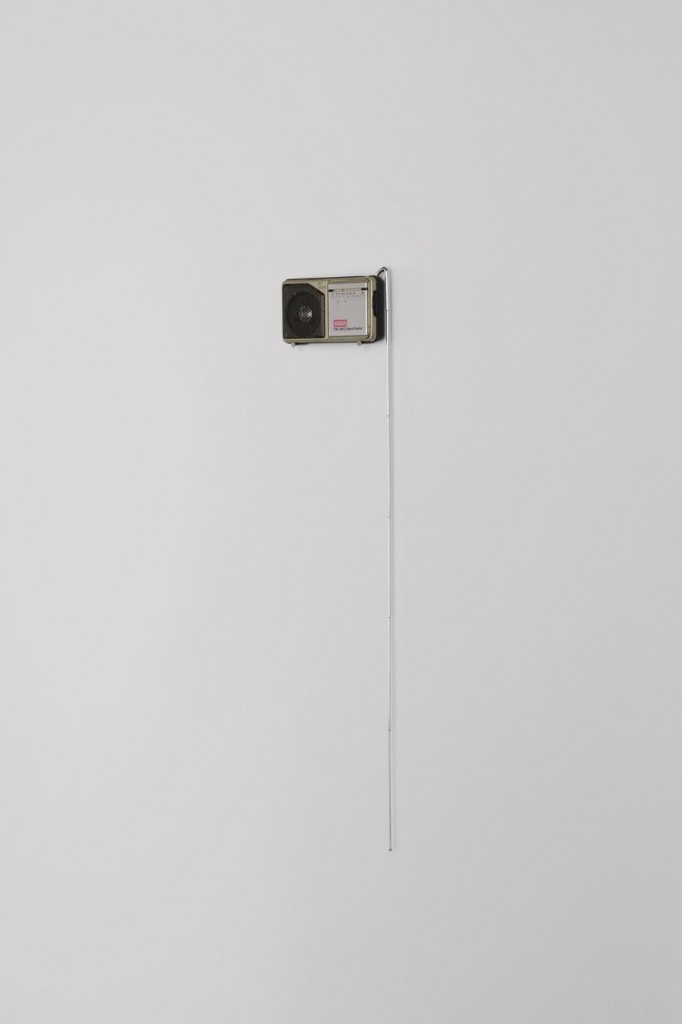 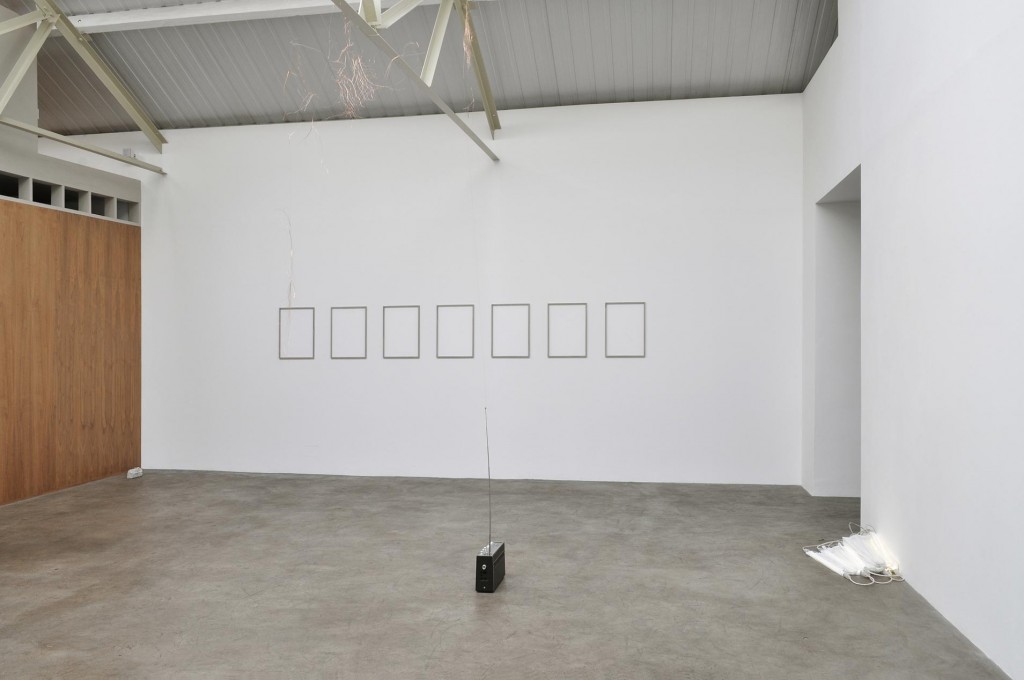 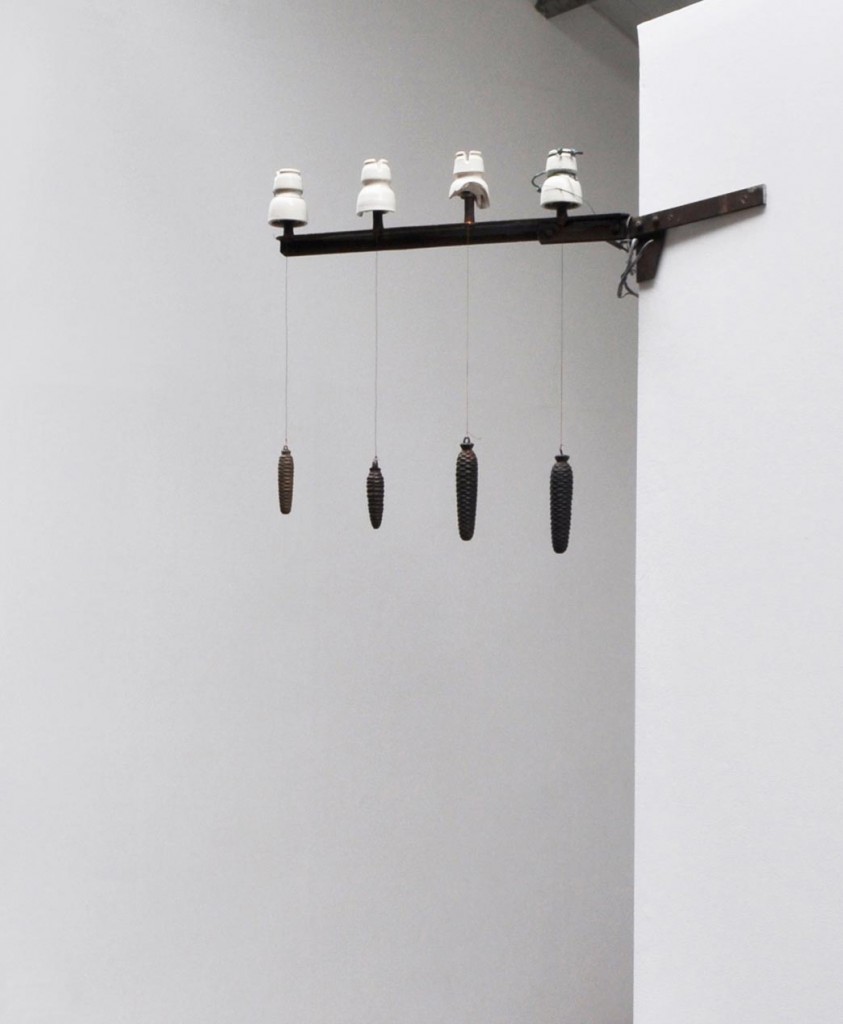 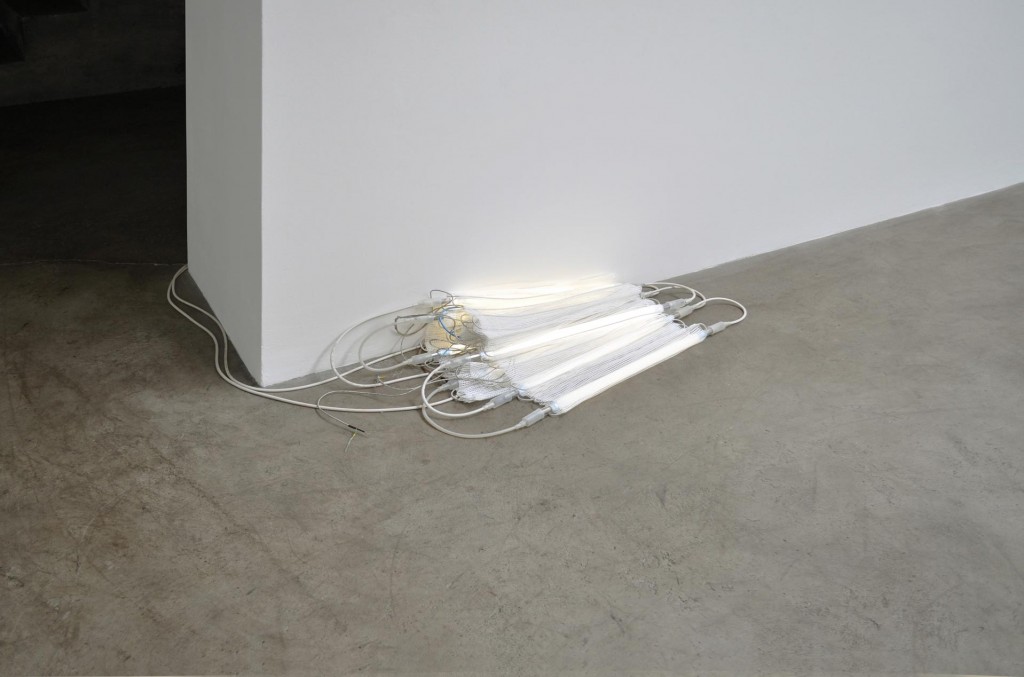 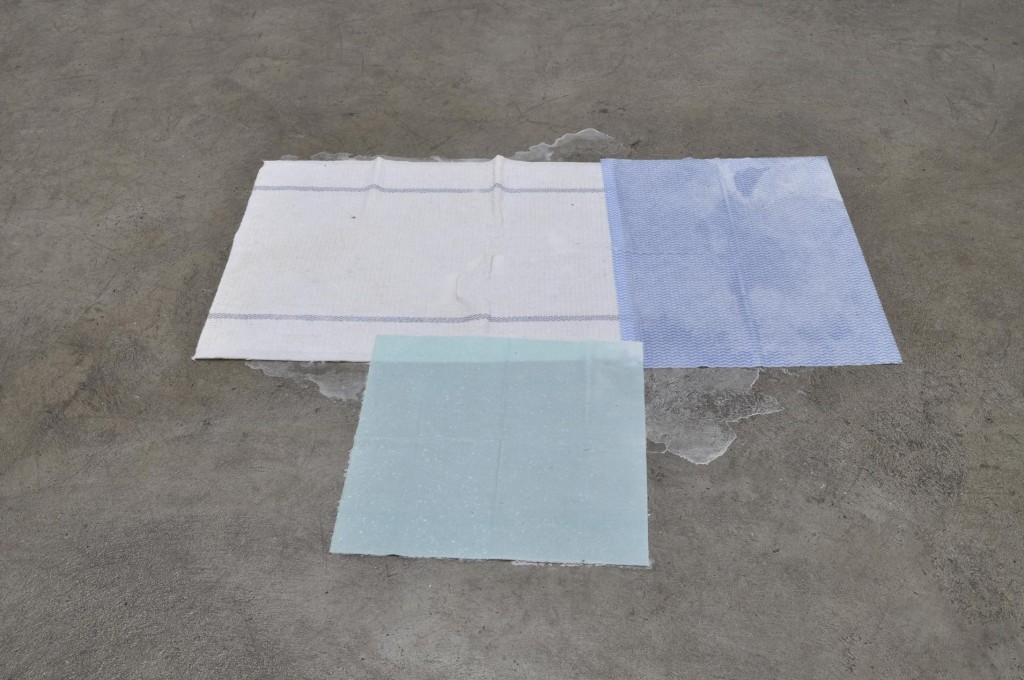 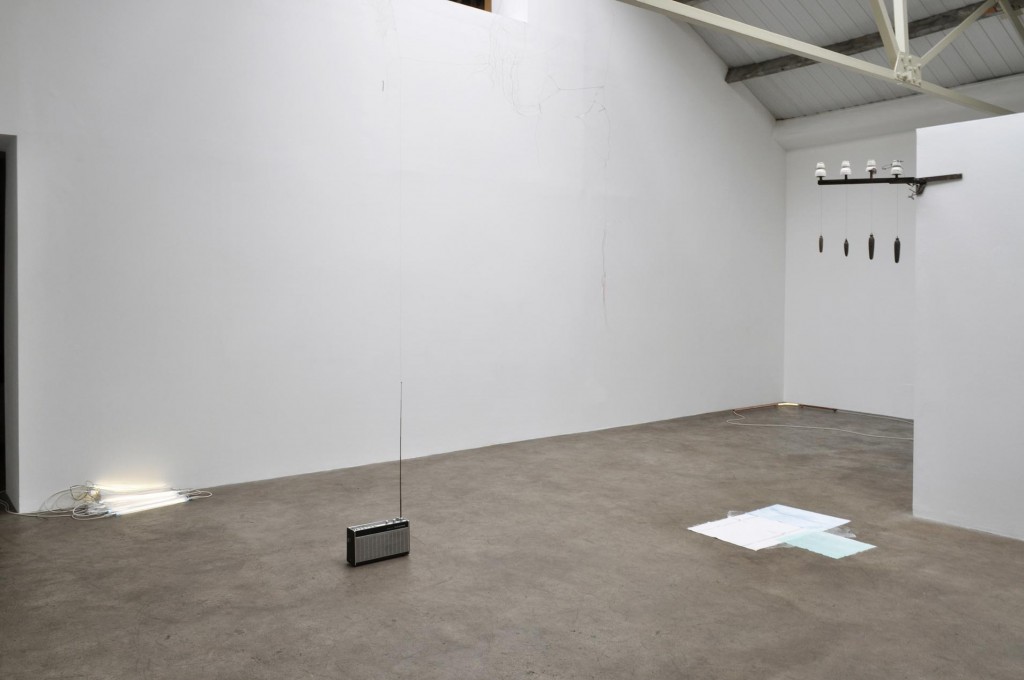 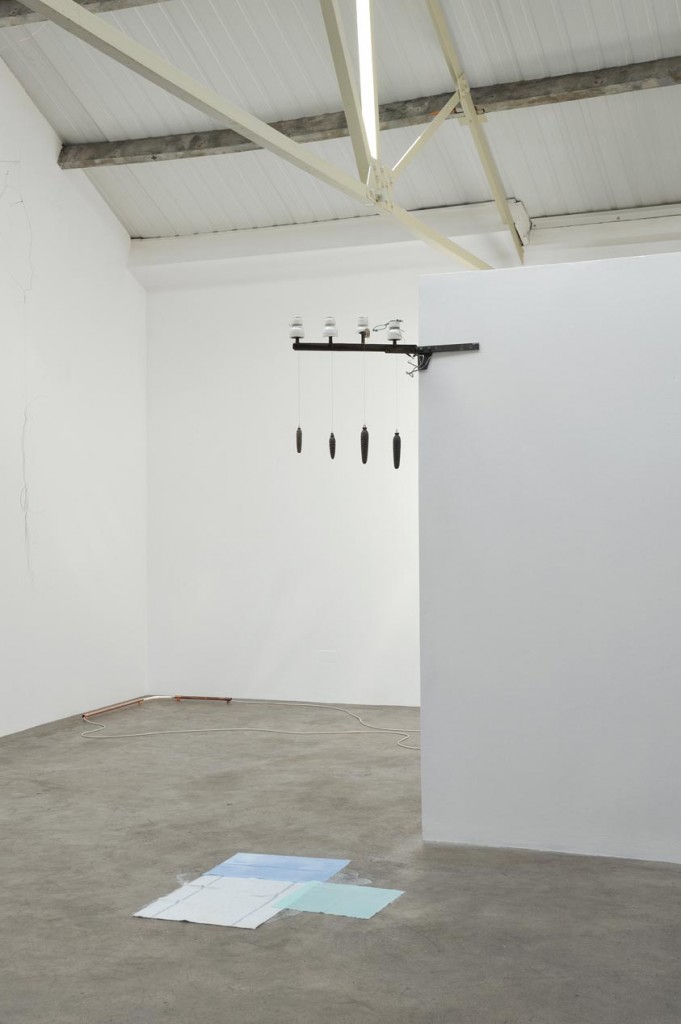