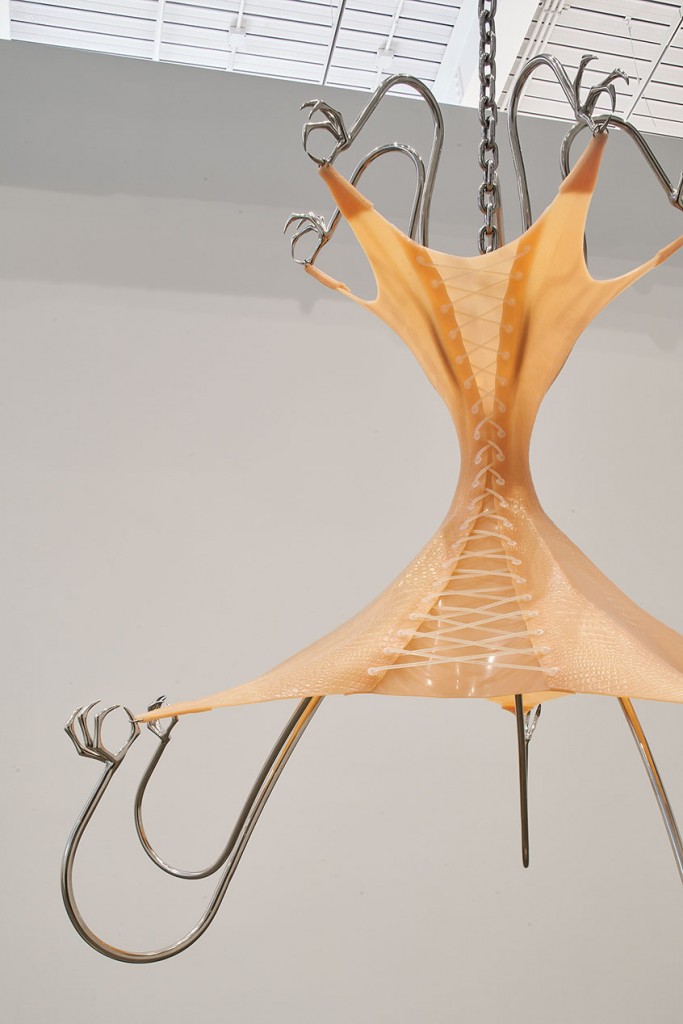 In MATRIX 279, the sculptor lowers our focus to ground level and finds there the allure of corporeal extremities. In contrast to the well-worn image of hygienic white walls and straight lines associated with Modernism, Levy’s cinched and taloned forms evoke Baroque decor and finishes of sumptuous velvets, silk and leather, glass, polished metal, stained wood, travertine, and lacquer. At the same time, these material references draw on the aesthetic of the Arts Club of Chicago, a Mies van der Rohe– inspired space, where Levy first showed most of the works on view. Levy’s animalistic sculptures invite rumination and lingering, but also evoke the disturbing reverberation of a sharpened talon on polished stone, a corporeal wrenching at once pleasurable and repellent.

In this exhibition, Levy explores Modernism’s unrecognized underbelly. She grapples with forms that vacillate from the aesthetic of manufacture to the danger of desire, while expressing the transition of materials from soft to hard, or treacherous to enticing. Working in an idiom that hints at historical precedents, Levy has invented a language that cuts across the body, design, animalia, and movement, implementing successive moments of suspension, balance, and swing to generate visceral responses on the part of the viewer. In the bright clacking of point on surface, her work offers a third term between the finish of Bauhaus and the flesh of the surreal.

The combination of metal and silicone, evident throughout the exhibition, has become Levy’s signature. In bringing together materials that exist at the far ends of the spectrum of hardness—one industrial, the other fleshy—she highlights similarities in how they merge with and capture remnants of the environment. Both shiny, polished metal and sticky cast silicone pick up the debris of contact, holding onto traces of gesture and touch, soiled over time. In these sorts of material and corporeal strategies, Levy defines herself as a descendent of the contemporary artist Matthew Barney, the consummate fabricator of bizarre and exquisite paraphernalia.

A consideration of the ways in which bodies have formed and been formed by design objects runs through Levy’s oeuvre, particularly in her work inspired by chairs. The earliest of these depart from an idea Levy had of a generic cafeteria chair. In avocado green, Untitled (2017) presents a set of anthropomorphic, deformed chairs in tight- fitting “dresses.” Distended and stretched out of shape, they walk as if on stilts, dancing in a manner that is at once humorous, sexy, and menacing. In fact, these chairs sit not on legs, but on claws. They are the first example of Levy’s use of the avian appendage that features in this presentation.

For MATRIX 279, Levy isolates the claw-foot from its chair and literalizes this furniture feature to fierce effect by fashioning pairs of metal claws in different heights into pointed stilts for human use—a sadistic high heel. Wearable with PVC sandal straps but exceedingly dangerous, these stilts o er an invitation to the viewer to envision embodying risk. At the same time, their gleaming bone structure punctuates the exhibition with short notes of visual pleasure. To render the clawed stilts and much of the metalwork throughout her oeuvre, Levy takes an unusual route and carves welded steel rods by hand, rather than using the more usual method of foundry casting. This labor-intensive process has long served Levy as a method for rendering structural forms.

Levy’s virtuoso carving of steel culminates in the armature of this exhibition’s creature-like Untitled (2021). Here Levy began with the image of a bat’s wing to imagine a truncated tent or a giant, lumbering creature with shiny, carved knuckles and translucent skin. Toned a transparent red, the color of a tongue or thinly sliced meat, the silicone tent looks flayed and domed, while prompting the viewer to crouch down to greet it. The bat’s wing, like no other in nature, relies on thinly stretched flesh—not feather—to enable flight. Its delicate bones are visible through the transparency of tissue. As Levy noted in an interview in July 2021, the bat has haunted society on a global scale in these years of pandemic, while the tent has become a sign of urban homelessness. The bat/tent form’s associations with spreading disease and world crisis somehow do not overshadow the wonder of its construction. Instead, it highlights the repellent sensation of finding beauty in destructive form.

The discomfort of opulence amid the carnal further resonates in Levy’s Untitled (2021), a monumental hanging chandelier placed at the forefront of the exhibition. Grand, suspended lighting fixtures of this ilk conjure images of mirrored halls, reflective crystal, and regurgitative feasts. Levy enrobes the shine of her nonfunctioning apparatus with the stretched silicone skins of a cinched bustier, anthropomorphizing the chandelier as a figure and further fixing it in the plushness of the past. The silicone surface of the laced “dress” is imprinted with the texture of crocodile skin and rendered in a sickly, dirty yellow. It is held in place by grasping claws at top and bottom, leaving the viewer to ponder some sort of arcane torture or macabre trophy. The hanging, wasp-waisted dominatrix might even reference Marcel Duchamp’s “bride,” a pendulous female form from his epic Large Glass (1915–23), which he described as blossoming, or orgasming, as she hovers above a group of ill-fated suitors.

Decades ago, feminist artists declined to facilitate visual delight in the depiction of their bodies in order to thwart facile pleasure. This move resulted in a number of alternate strategies to address the notion of gratification in art, yet there was also a widespread resistance to picturing pleasure. Throughout her oeuvre, Levy has imagined a vocabulary of desire that avoids the one-sided, devouring gaze without foregoing sensuality. Daring to be explicit about fantasy, she negotiates the line between horror and ecstasy, masterfully crafting a gathering of haunting forms that speak of polymorphic pleasure through the combination of everyday object and bodily imprint. Without recourse to figuration, Levy evokes teetering ankles strapped into stilts, the sharp intake of breath as a corset is fastened, or the slap of bodies making contact. 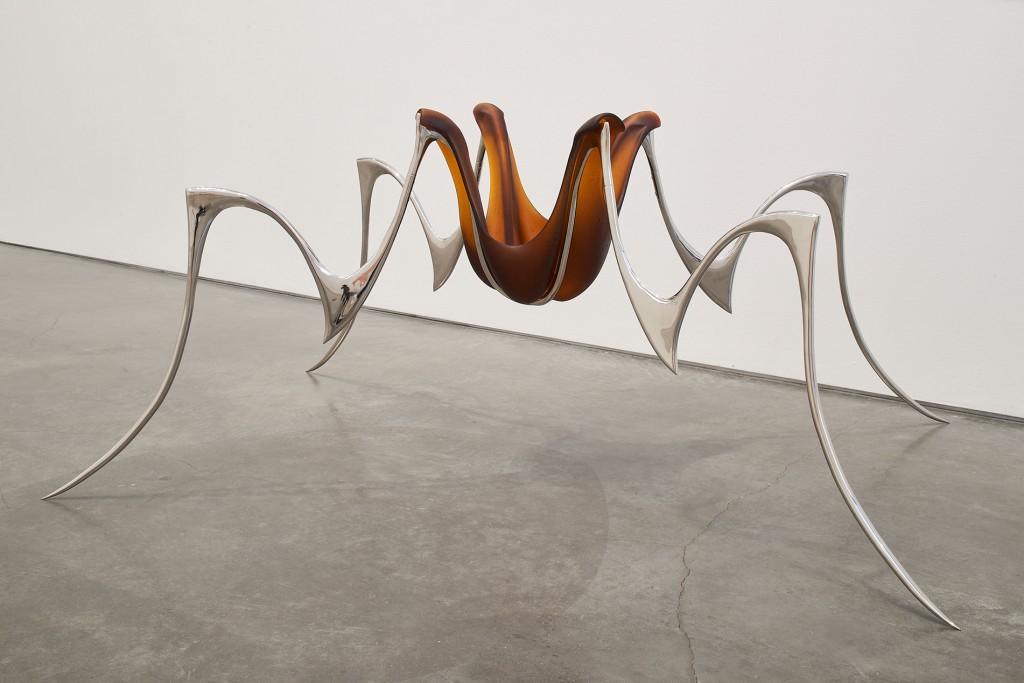 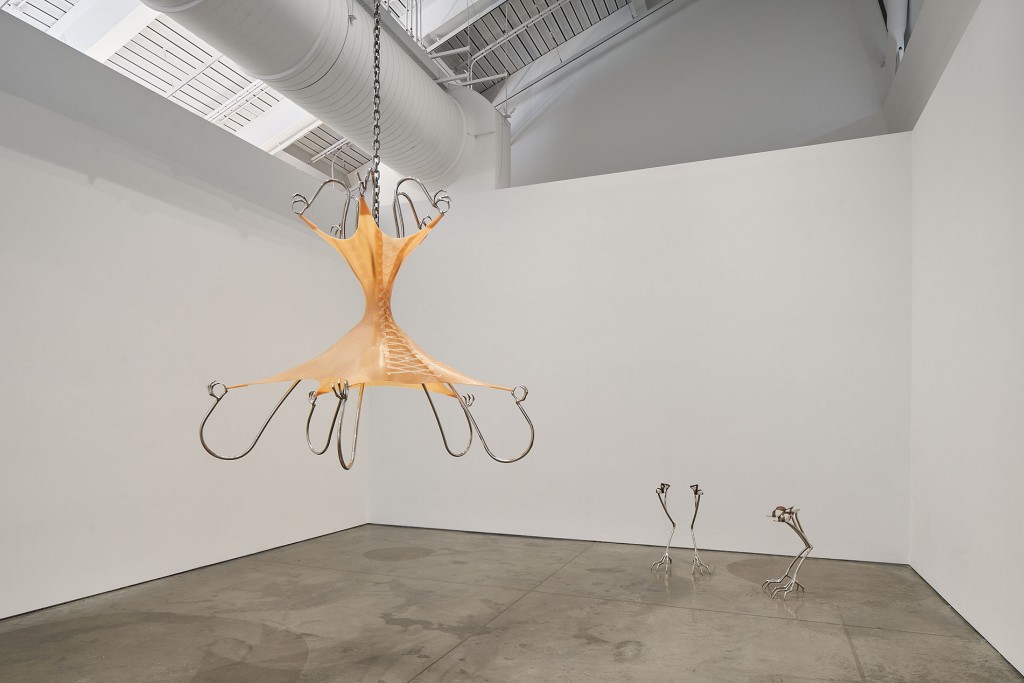 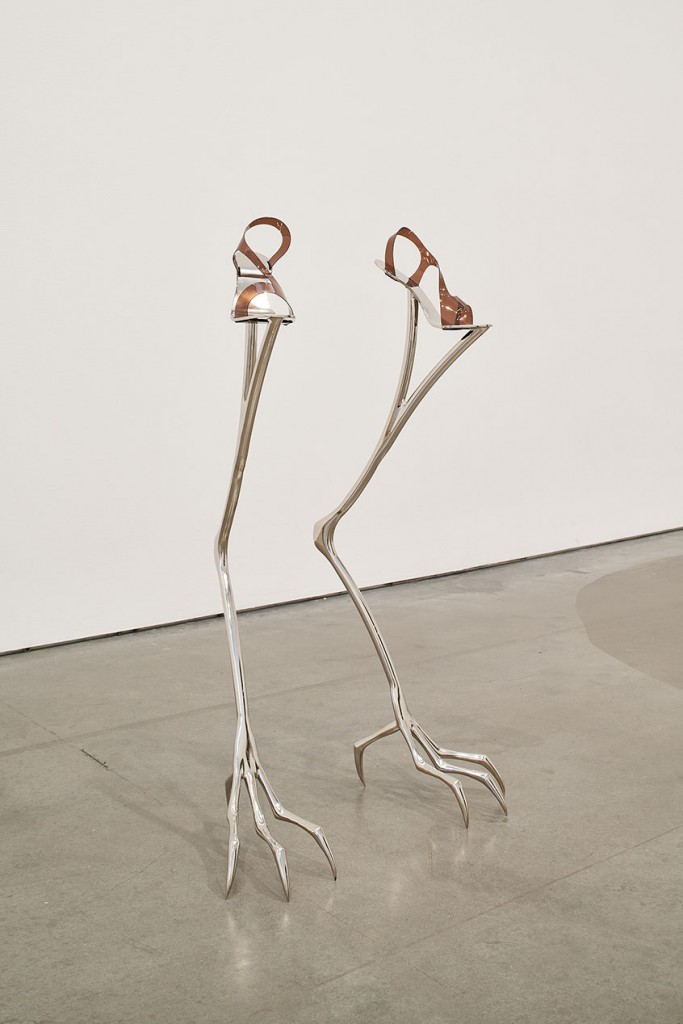 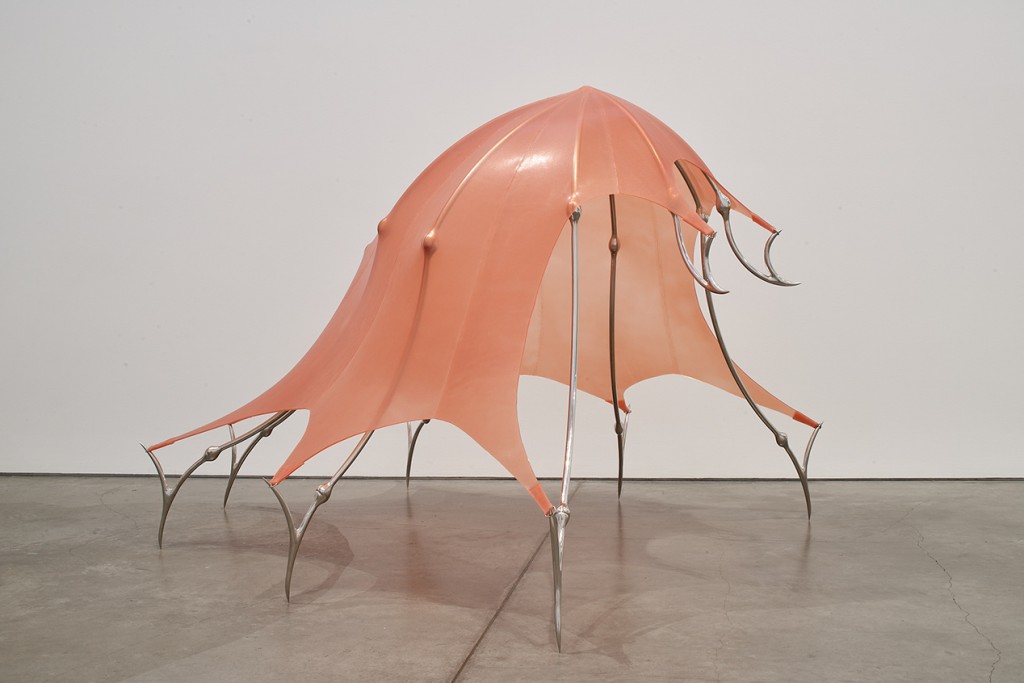 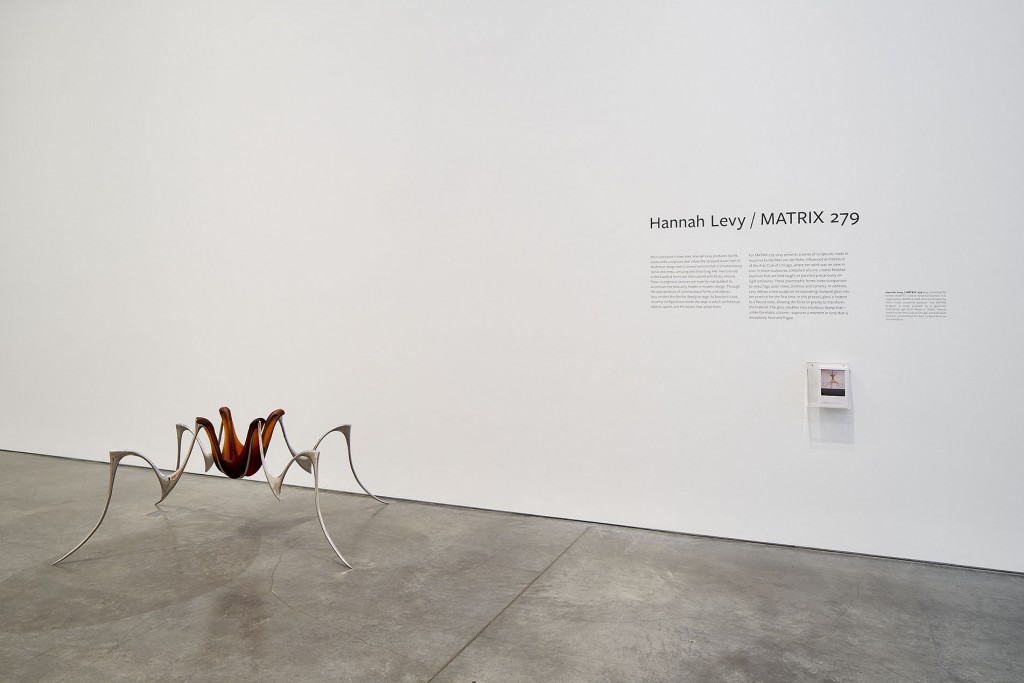 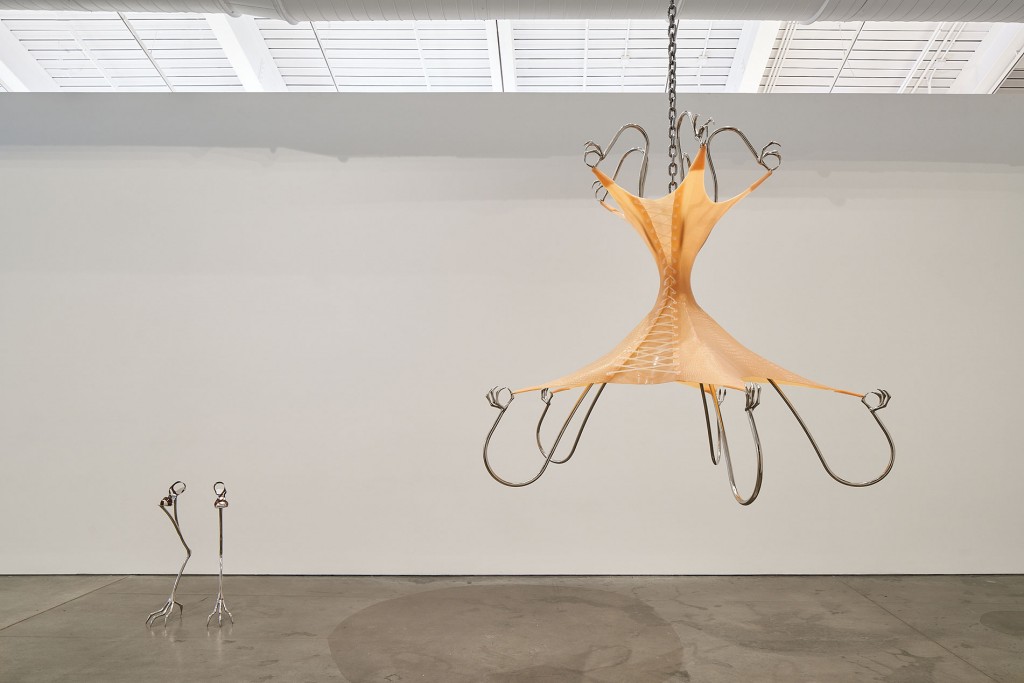 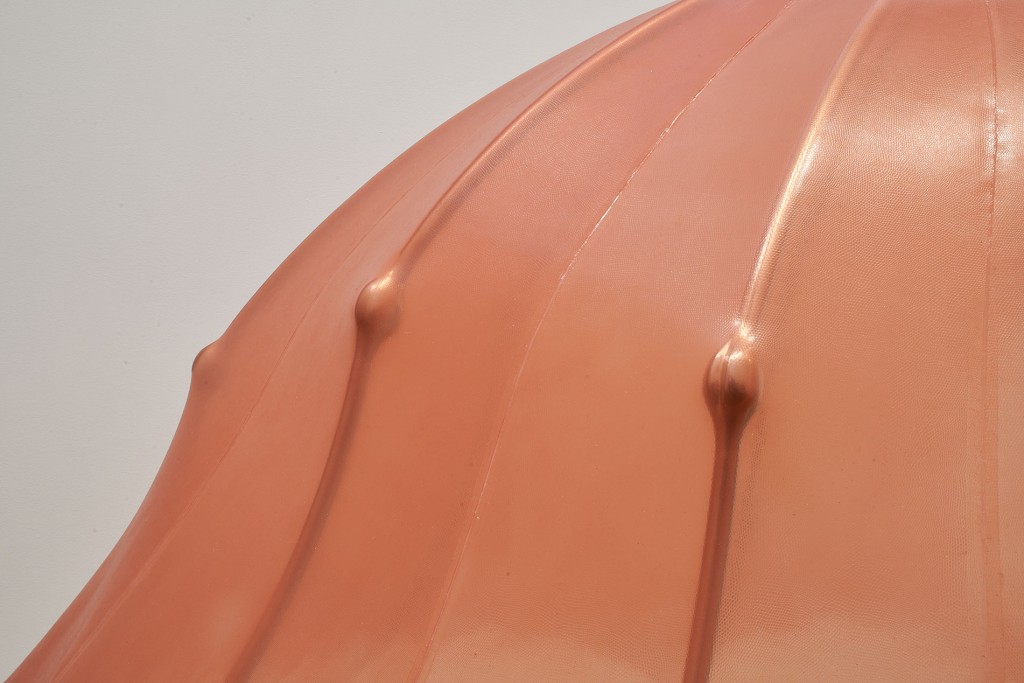 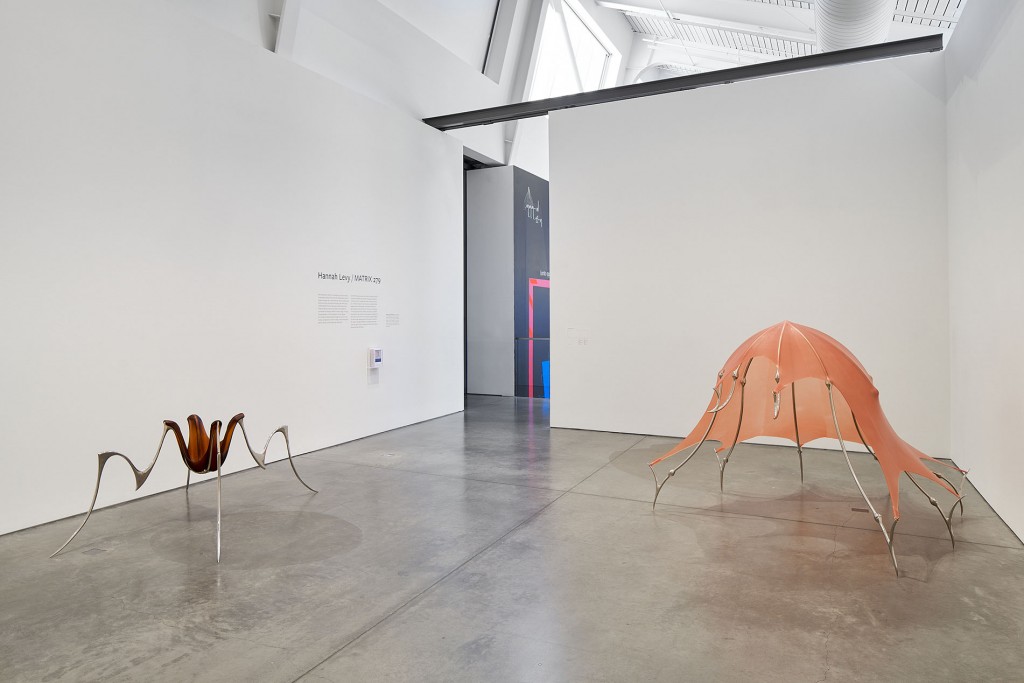 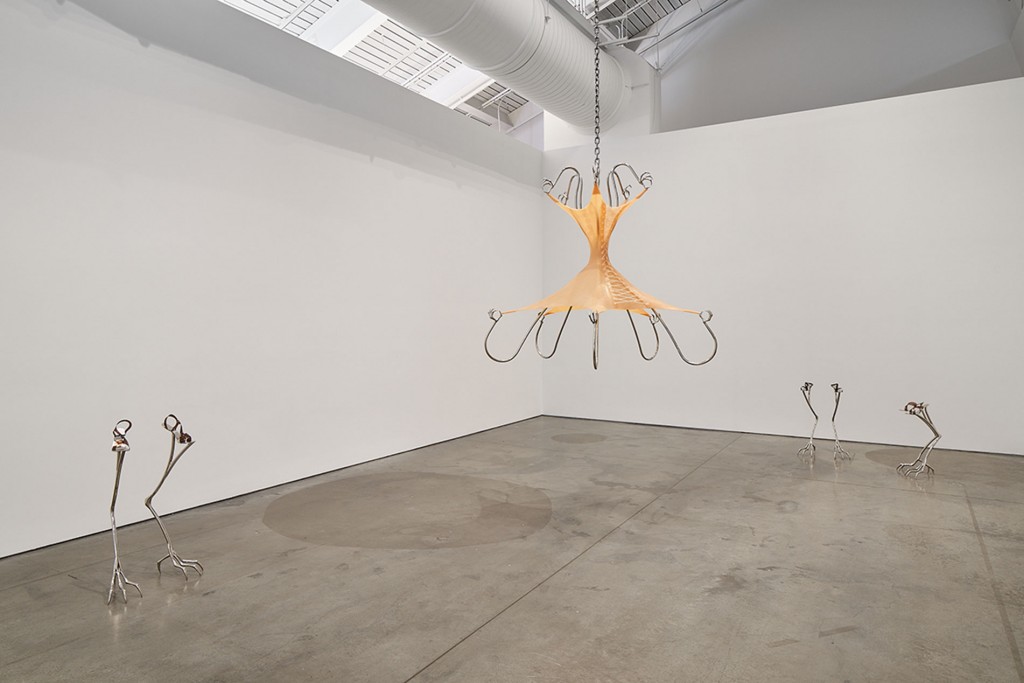 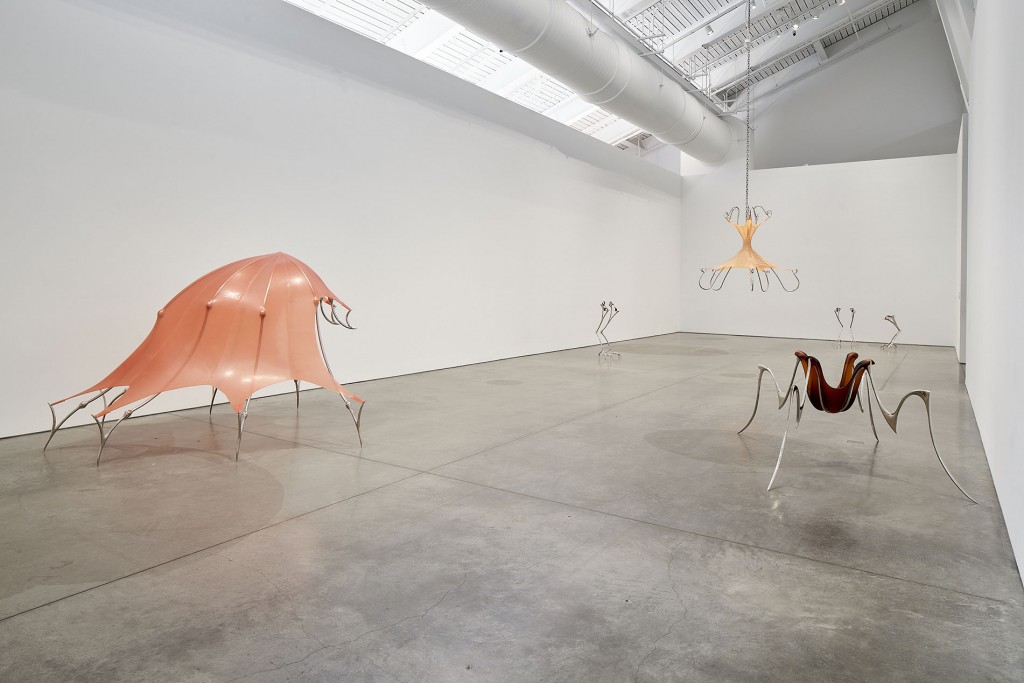 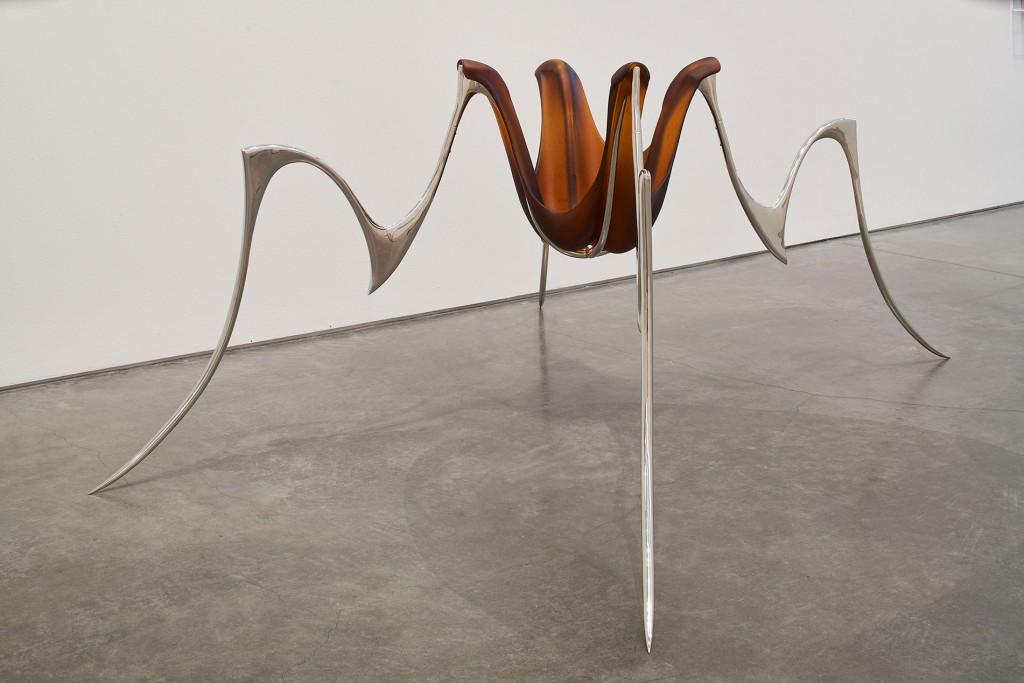 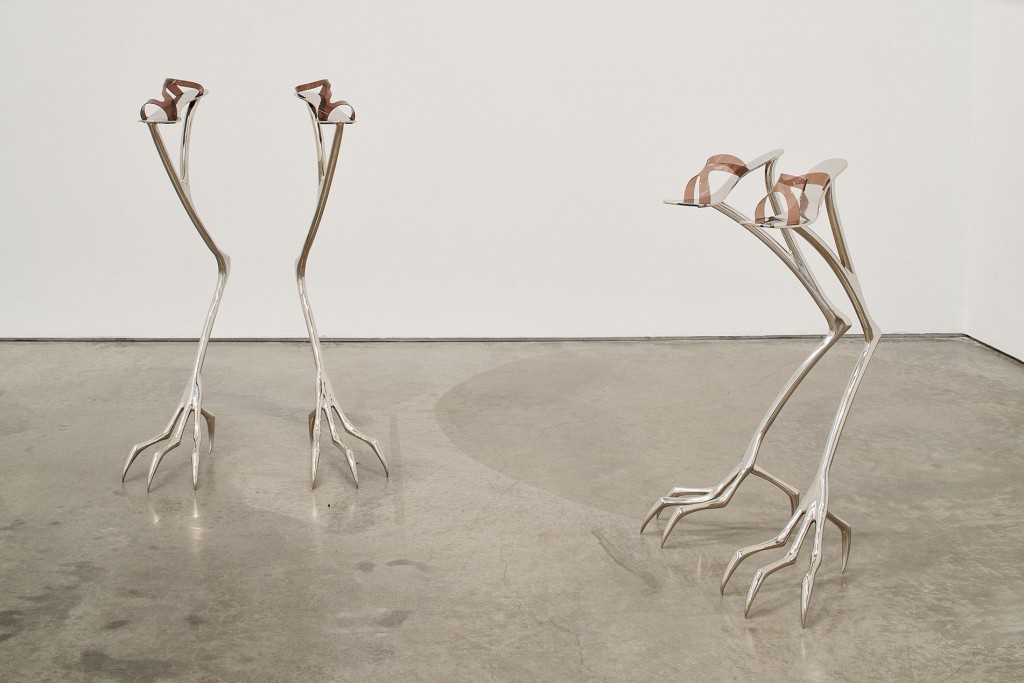 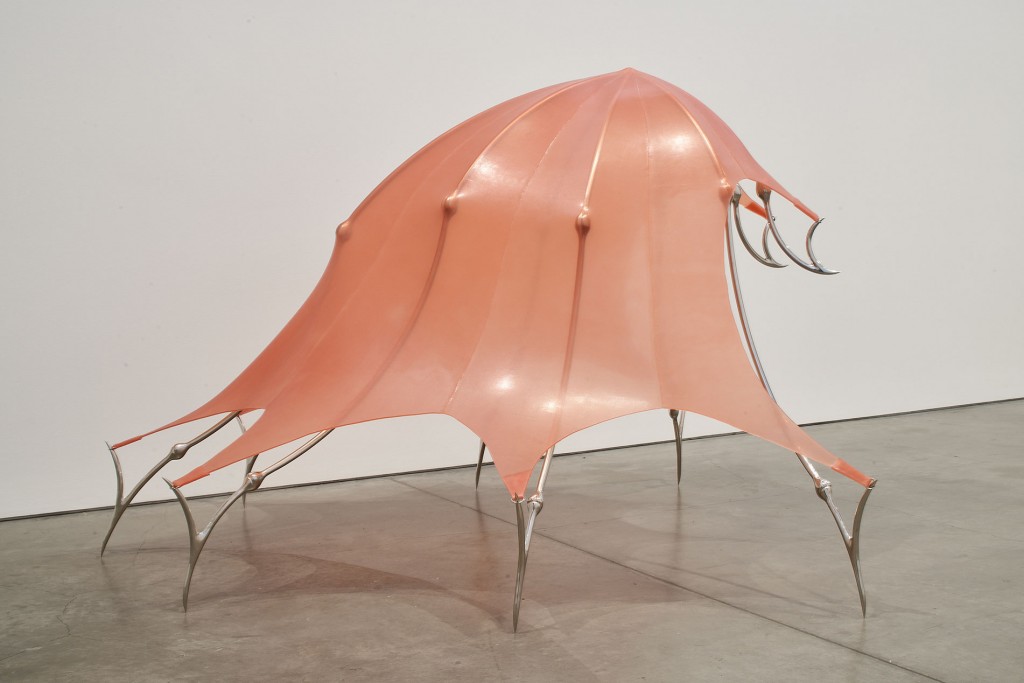 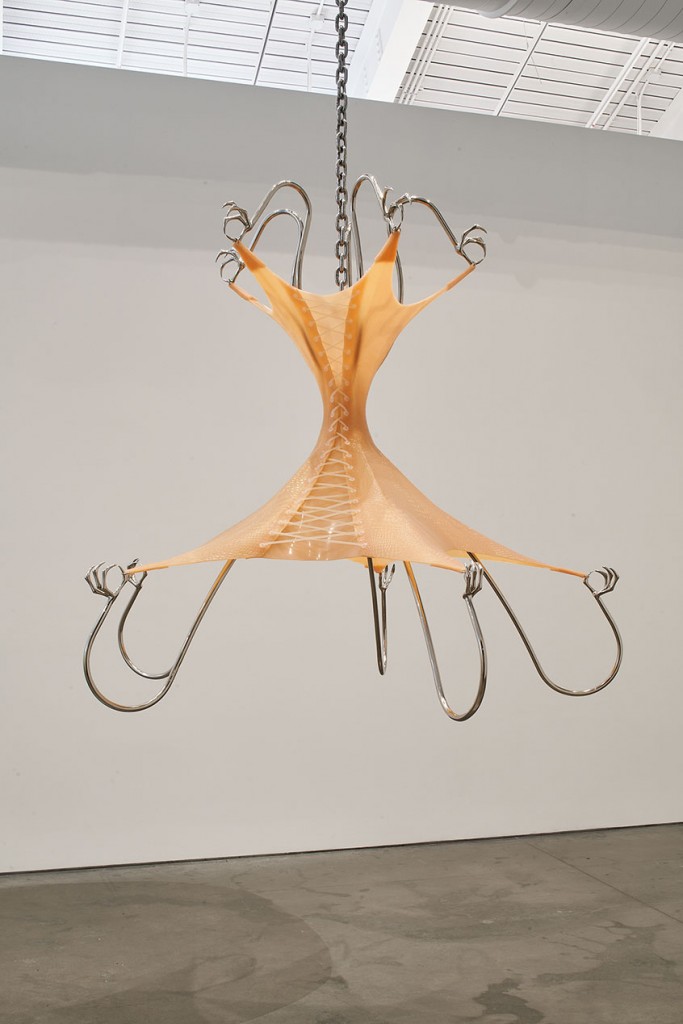 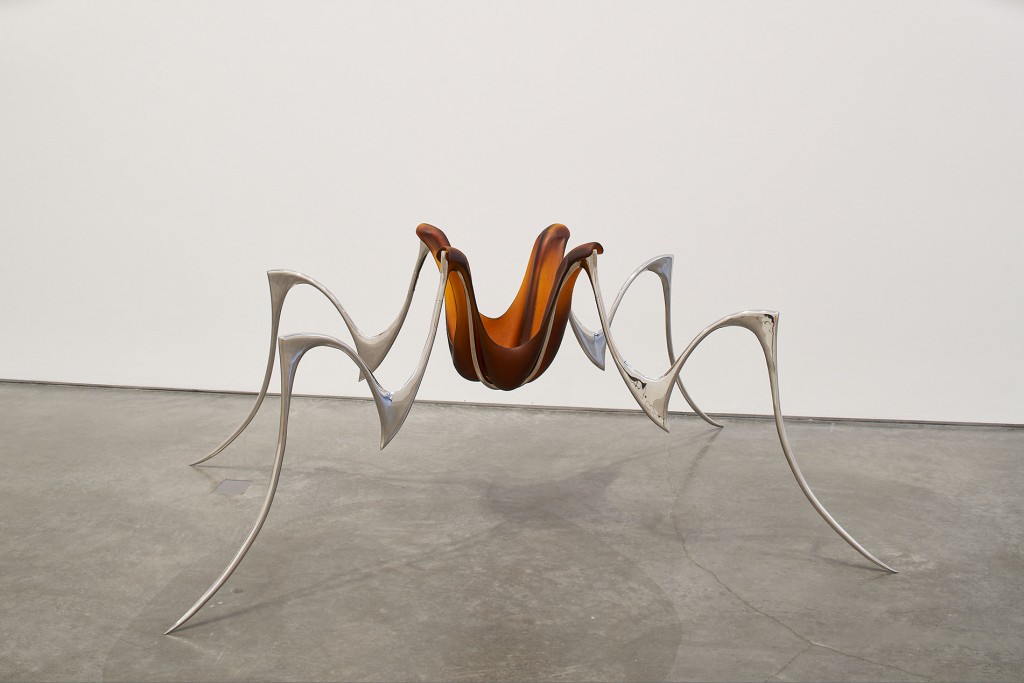 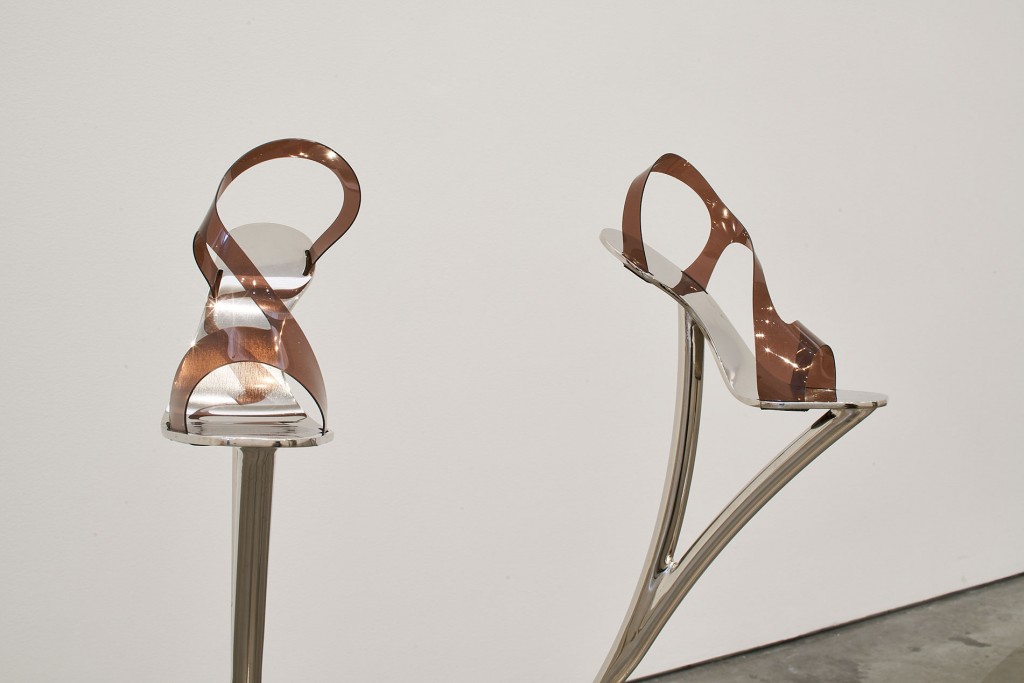