Ghosts of the Future 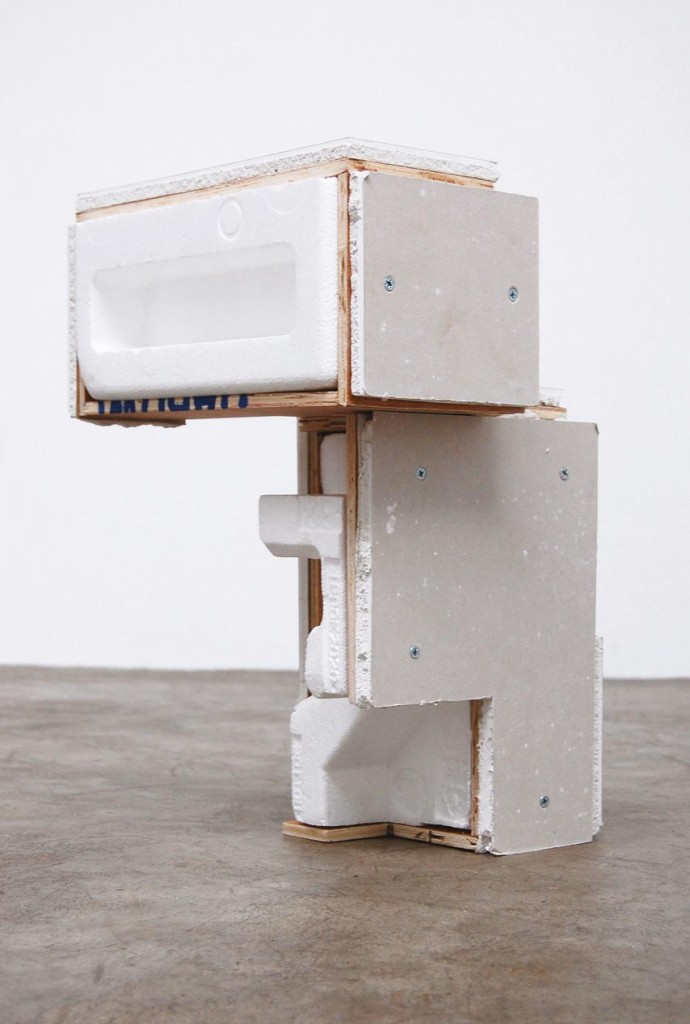 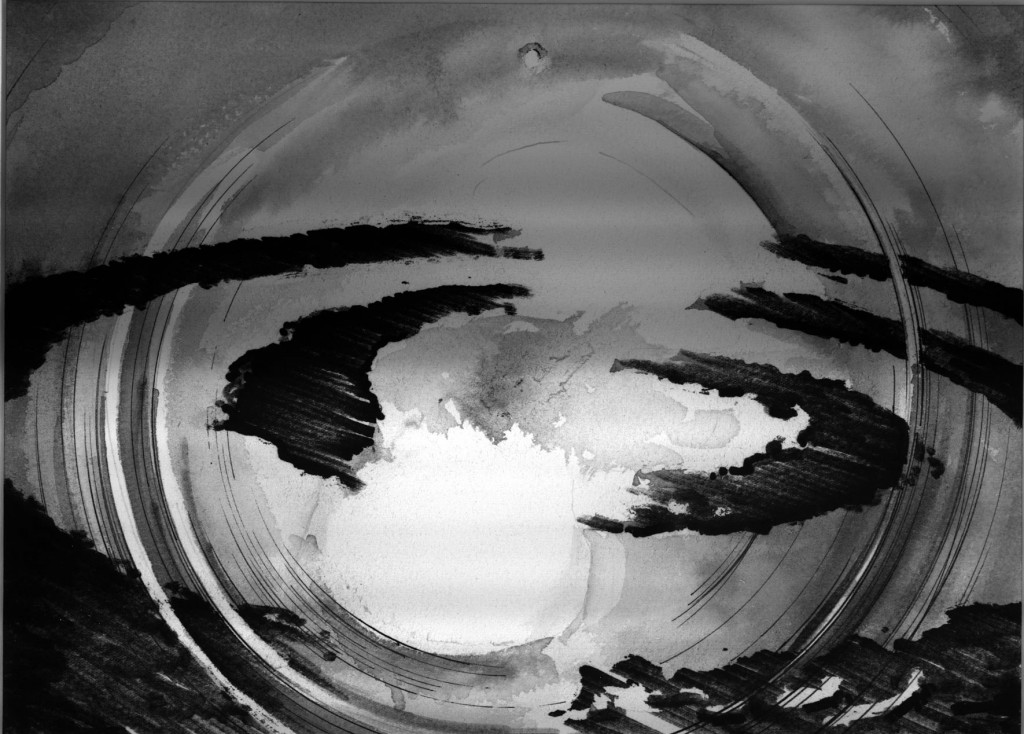 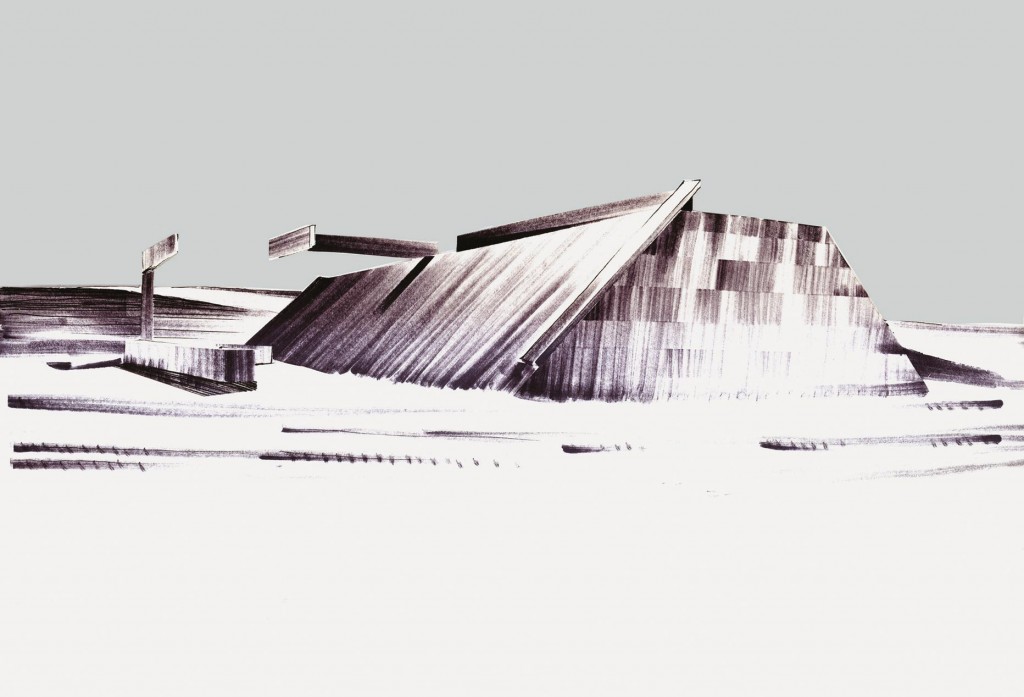 Ghosts of the Future

Nothing can be neglected. There are no poetic objects, as opposed to others that are not. Genuine purity has nothing to do with the choice of objects but more of means: it is that which courageously faces up to the harshness and impurities of the world, and returns to the light of day having lost nothing of its whiteness.  The poet has a right to all words, as the artist has a right to all imagery and the architect to all materials: their only sin would be a lack of love for some fragment of the universe.1

A pyschoanalist might take pains to point out that Brendan Earley’s art is unrelentingly optimistic, in its (near compulsive) need to fix broken things, to make things right, or to map routes through shifting spaces that are almost impossible to navigate – like abandoned cities or JG Ballard’s disused space station2. This desire to search out ‘the good in things’ is evident in the particular taxonomic passion Earley exhibits for clumsy bits of off-cut timber or discarded fragments of styrofoam packaging, which he transmutes into sculptural objects and architectronic installations of piognant delicacy.  Most of us would, evidently mistakenly, overlook or find little poetry therein, but life is of course rewardingly richer when another’s passion for entropic structures shows us an alternate and ultimately happier way of seeing bits of our shared and mostly grumpy world.

Looking through an ecological eye, Earley’s work suggests that it is perhaps time to raise the standard of ‘enough’ – as in; there is enough in the world already, thank you! – by fixing things that are broken rather then throwing them away and getting new ones. An anecdotal example from Earley’s recent artistic history illustrates this point well: Earley’s exquisite temporary sculpture ‘Large Complex’, built for the Douglas Hyde project in 2008, was constructed from a flat-pack IKEA kitchen, once the exhibition was over the sculpture reverted to its former and originally intended state and was advertised in a local free paper as an ‘unassembled’ kitchen available  for ‘free’ pick-up.  The kitchen’s perverted natural path was properly re-aligned and now resides in service somewhere in Kildare – with just a few surprising holes, otherwise continuing its secret life as a conceptual sculpture.

This new body of work epitomizes Earley’s sensibility of weltmodesty. He employs restraint and compromise and marries it to a sense of resignation and even a slight amount of dissatisfaction and sadness, but carries on regardless with a self-evident pleasure in the application of ‘craft’ techniques for their own sake, his objects appear just happy ‘to be’, content in an engagement with the here and now.  This same sentiment can be found in Earley’s large drawings, made up of thousands of strokes from black markers. Process is paramount in the overall effect of the drawing and rather than attempting to depict specific buildings, he considers them as architectural in themselves. The constant rhythm of a pen on paper renders a space not unlike that space made by a building, creating a border, a safe place.

Earley’s sculptures, installations and drawings have a nostalgic patina of botched Utopia about them, mustering a quiet critique of familiar, more heroic kinds of angular, muscular, modernist hegemony. The architectonic structures in his works are frequently informed physically by echoes of large and futuristic, or ‘visionary’ kinds of architecture, such as Michel Heizer’s Complex One, built in the Nevada desert, that which commonly alludes more to an idealized future, or even science fiction rather than the prosaic present. In comparison, Earley’s consciously impoverished and self-effacing restorative acts – reinforcing, refacing, repairing, etc…. usually employing the commonest of common building materials; reclaimed timber, styrofoam and plasterboard, return unloved, ‘unreported’ objects3, from a lost state of grace.  Earley professes to worry about the future and as a hedge-bet against impeding dissastor tries to make do with the present, remaking the future out of the past, or as Fredric Jameson has put it: “…transform[ing] the present into the past of something yet to come.”

Earley cites a conversation with his former sculpture professor, Robert Morris as formative in the conception and direction of his current practice: Morris suggests that objects, which are plain and unadorned, tend to be universal and accommodating. “I asked him a question as he was going out the door. It had been on my mind all semester after some lengthy debates concerning the health of post-modernism, now that it seemed to be going the way of Modernism. “Bob, what’s next?” I asked. After a brief consideration he replied, “ Emmm, I think this is it.”

Brendan Earley studied sculpture at the National College of Art & Design, Dublin and combined media at Hunter College, New York as the recipient of a Fulbright Award. He has exhibited major installational projects at The Douglas Hyde Gallery, Dublin; Void, Derry; Pallas Heights and Temple Bar Gallery, Dublin. Ghosts of the Future is his first solo show at mother’s tankstation.

1 Jean Rousselot, ‘L’Evangile selon Rainer Maira Rilke’, in Les Lettres Nouvelles, 1952
2 For this first solo show at mother’s tankstation, Brendan Earley has employed the lens of narrative, JG Ballard’s classic short story; Reports from an Unidentified Space Station.  Wherein the protagonist lands on a small space station to make repairs. Although it initially appears as a station of insignificance proportion, through the course of the story it is discovered that it is actually of immense size and mutating form. Once the crew starts to explore their new home they venture further into the strange interior where spatial kinks in the architecture lead the narrator to speculate that one is really a solitary voyager, moving through vast areas of transport lounges full of stacked furniture waiting for the next crowd to disembark. The story highlights ideas of obsolescence and what has been described as the redemptive potential of out-moded practices and forms. An audio work occupies the first gallery of Earley’s installation, with Ballard’s text read aloud by the artist and theorist, Brian O’Doherty. The narrative unlocks the potential of the central work in the show, that of a sculpture which uses the very fabric of the space (apparently) to complete or fix itself, becoming new every time it is shown.
3 The acknowledgement of our relationship to consumer goods allows the real, the social and the weird to merge into sculptures that reference or employ what Ed Ruscha once described as the ‘unreported artifacts’ of the urban landscape. 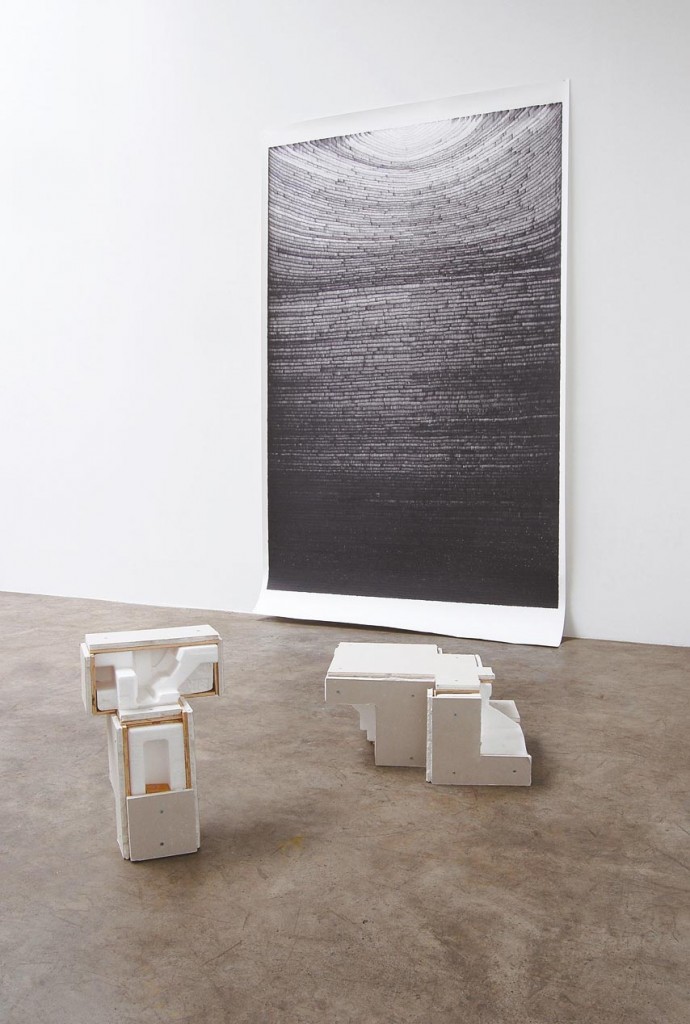 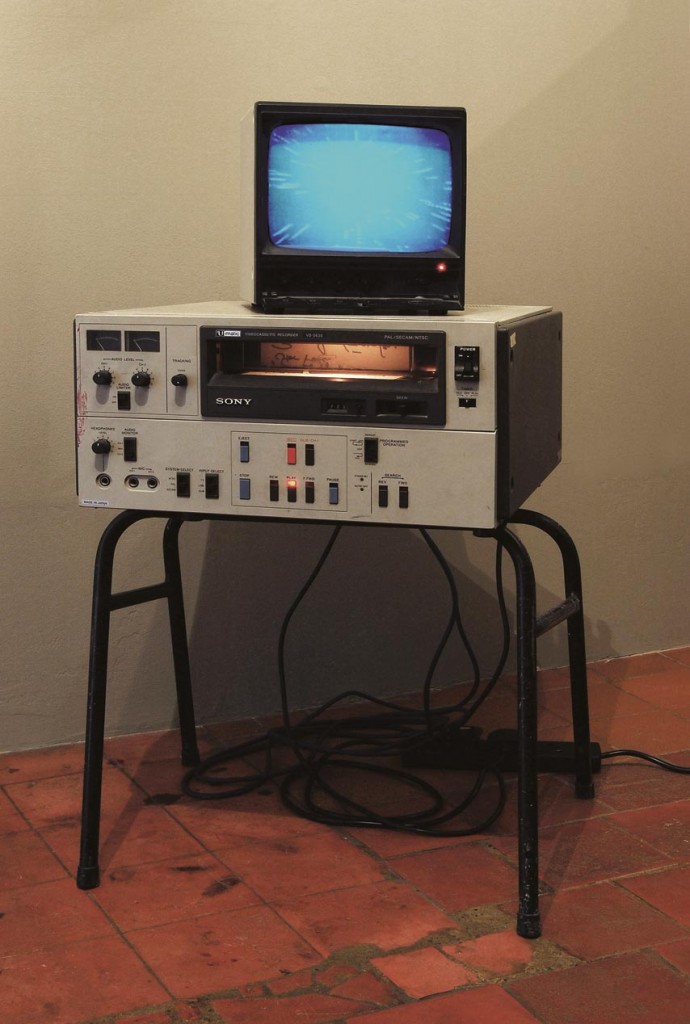 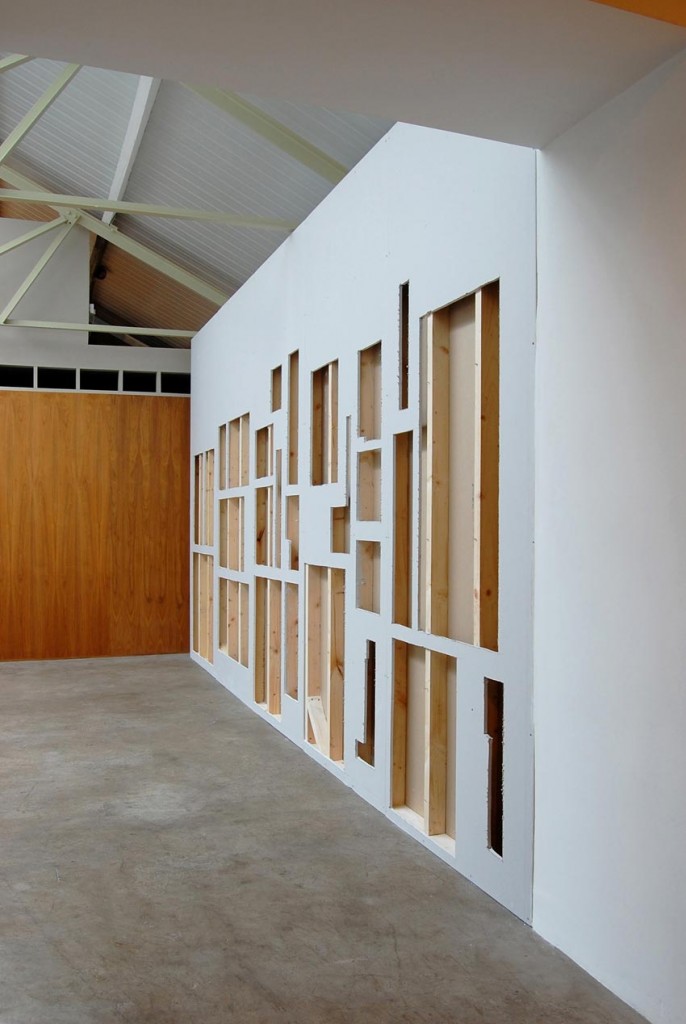 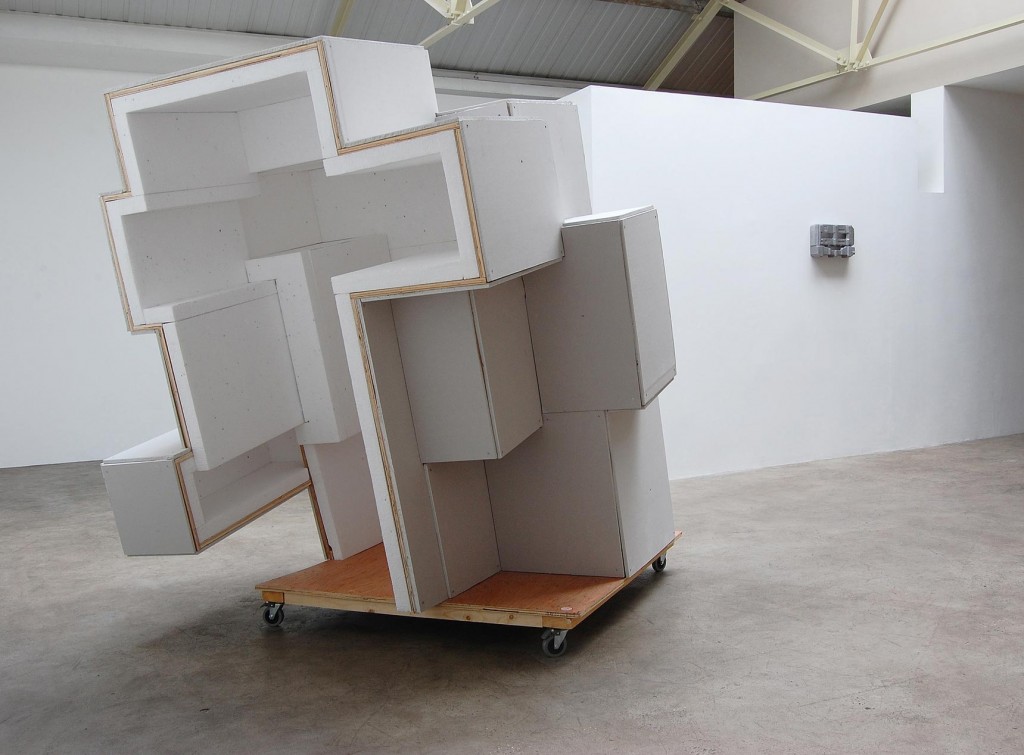 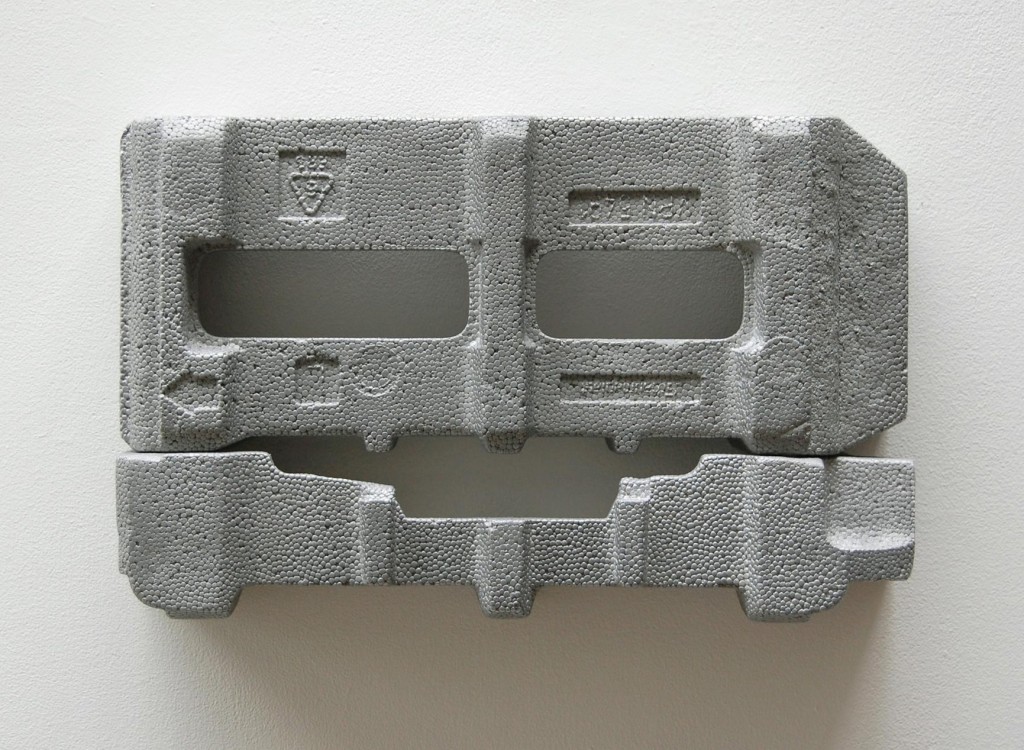 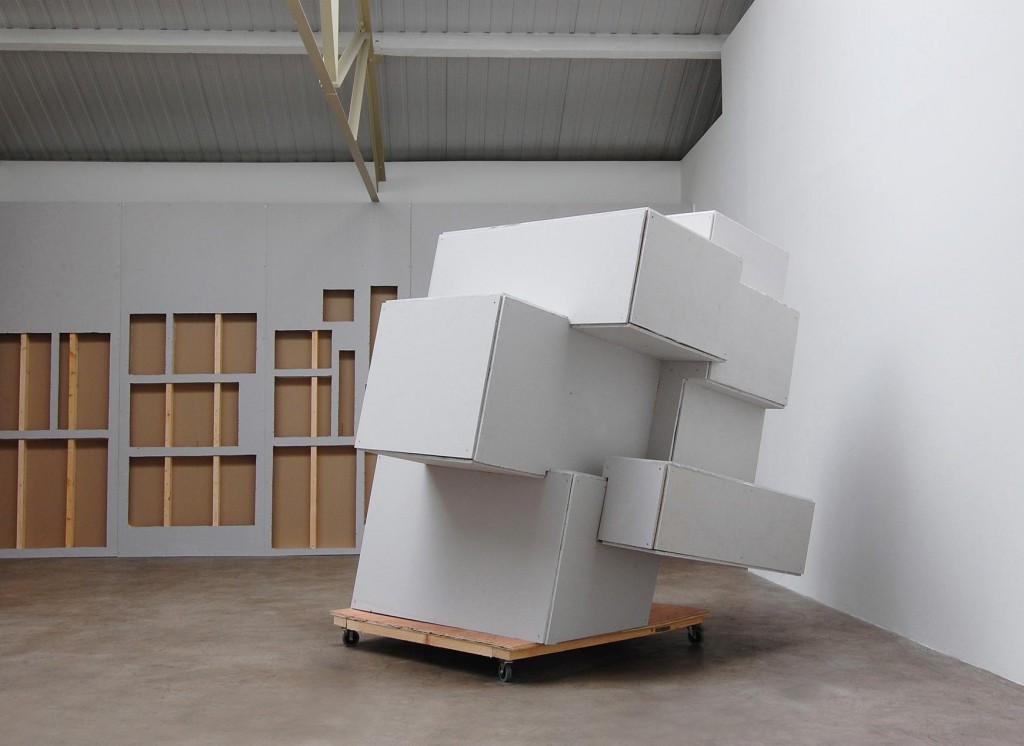