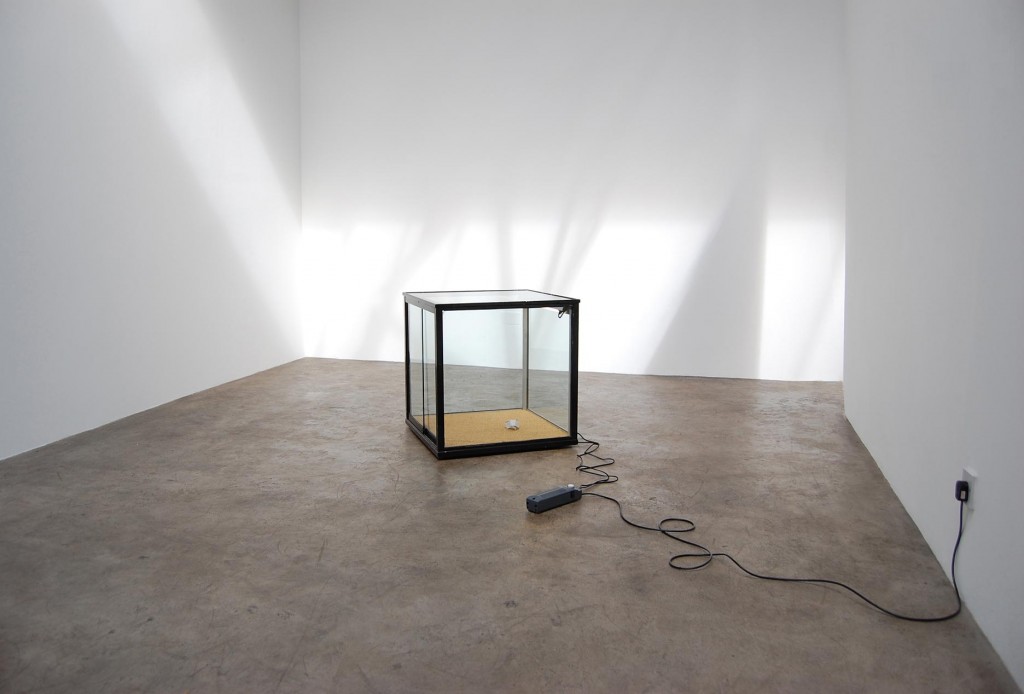 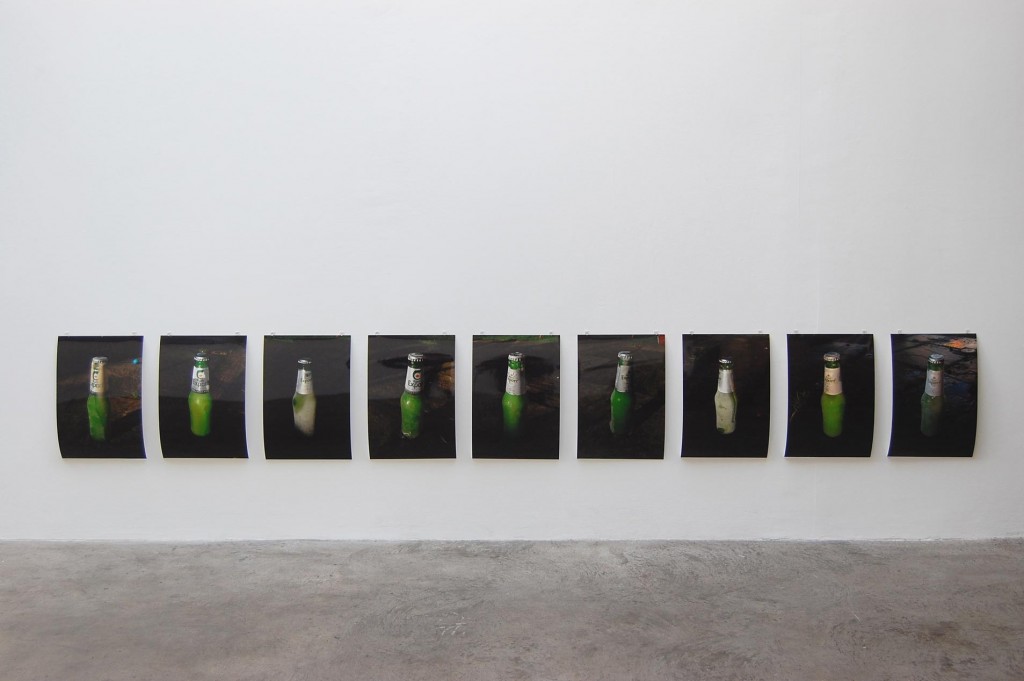 Art (consciously written with a capital ‘A’) has been the concern of philosophers from the beginning, from which art (with a small ‘a’) has historically come out rather badly. In The Republic, Plato determined art as mere imitation, a shadow. For Hegel too, art was essentially locked into notions of history; in 1828 he wrote that art “…in its highest vocation, is and remains for us a thing of the past.” The historical point1 that witness the equalling-up of this equation2 may therefore be read as a major philosophical u-turn, which in turn, ushered in the age of post-historicist thought. At some juncture in the 1970s the philosopher and art critic Arthur C. Danto was standing on a street corner in Pittsburgh when he claims to have had an epiphany relating to an exhibition that he had seen, some years earlier, Andy Warhol at the Stable Gallery, New York, 1964. The show contained one work consisting of a number of identical pieces of artwork that, for all intents and purposes were consciously made to look exactly like “mere real things”, Brillo boxes. It evidently took some years for Warhol’s intent to strike home, but when it did, it hit Danto like an out-of-control car careering across the Pittsburgh intersection. If art could be deliberately made to look like anything, then anything could look like art, and by extension; art could be anything and anything could be art.

This post-Duchampian revelation effectively meant that all the mainstream histories of ‘Art’, those that had contributed to notions of the developmental path of artistic excellence; in terms of mimetics, craft, tradition, connoisseurship etc, were rendered meaningless in the now. All that remained essential to the on-goingness of art was the philosophical intent of artists and their own personal histories  – every artist and artwork effectively started afresh, from day one, making Duchamp’s urinal as essential to the onging not-history of art as Michelangelo’s Sistine Chapel. Not only was ‘Art’ entirely liberated from the need to look like things, being a philosophical ‘thing in itself’, art only needed to look like itself, which in turn, could be anything at all. And more, it meant that future (documentary) histories of art/artists would have to be considered in the Duchampian lineage of greater democracy and socially available anti-elitism, in preference to the prevalent Greenbergian line of artistic purity being essentially dependant upon the remove of art from the everyday.

Locky Morris (born Derry, Northern Ireland) is a perfect temporal inheritor of the idea of uninheritability, a quintessentially post-historical artist. His work is in and of the everyday, out of history yet immersed in it. His densely intelligent art looks just like life, and most particularly his life. Therefore it simultaneously looks like everything around us, and absolutely nothing else at all.  By Danto’s determination, his art is genuinely (in the only true sense of the word), unique and post-historical, outside any time other than its own. With evident delight and humour Morris magnifies seemingly insignificant details of everyday life, piles of washing, cups of tea, chewed pencils – daily epiphanies, as he describes them – until they acquire the complexites and emotional profundity of an operatic aria.  We laugh and cry at them and with them in equal measure. When the artist’s intention reveals itself to the viewer – and it often tends to do so in a slow and deliberate manner – these apparently ordinary things transmute into iconic and irreplaceable things, systematically unveiling Morris’ extraordinary capacities for observation and perceptual manipulation.  In the title-work of the show; From Day One, (2009) Morris installs a square section of his bedroom carpet into a glass vitrine, lit with a single, analytical fluorescent tube, onto which a tiny cardboard collar-support, from his daughter’s first day of school shirt, had casually been tossed. The viewer, touched by a moment of such profound love, is also left with the irresistible and hilarious visualisation of a family bedroom missing a perfect square metre of flooring.  Similarly, in Acid Free, (2008-9) hundreds of tiny plastic packets of Morris’ habitually taken anti-acid medication are assembled with the formal rigour, elegance and new-found dignity of a Dan Flavin installation.  In an unassuming photographic end-print pinned to the wall, Morris notes the incredible physical resemblance of a family pet, lying prone with its legs in air, to an upturned outdoor plastic chair.  As with most things ‘Morris’, it’s not just the obvious that matters, it’s in the detail, the tonal subtleties… it’s also confounding that the artist was present, camera in hand, at the only possible moment of perfect equivalence, thought-provoking in itself. The equivalence of dog = chair is perfectly formed by the tonal gradation towards the up-ended ‘underarms’ of both, and most particularly the resemblance of the chair’s curvature and drainage point to the dog’s tummy and poochey penis. Morris revels in the simultaneous inflation and deflation of his visual, sculptural and conceptual metaphors, finely tuning bathos and pathos into a mechanism that simultaneously loves and laughs at itself loving.

The idea of ‘post-history’ is even relevant to this section of a press release, wherein one usually talks about past, present and future career achievements; as in his own past Morris has downplayed the importance of such past things, consciously leaving biographical pages blank in Tate and Hayward gallery catalogues during the 1980s – see, we still managed to squeeze it in by inference if nothing else.  Now, as then, he seems happy to start afresh, again, from day one.

1 Or at least the history of philosophy.
2 i.e. the ending of the idea that saw the inherent necessity of the placement of ‘new art’ in the canonical lineage of historicisable pastness as a pejorative descriptor for making art successful, and therefore Art. 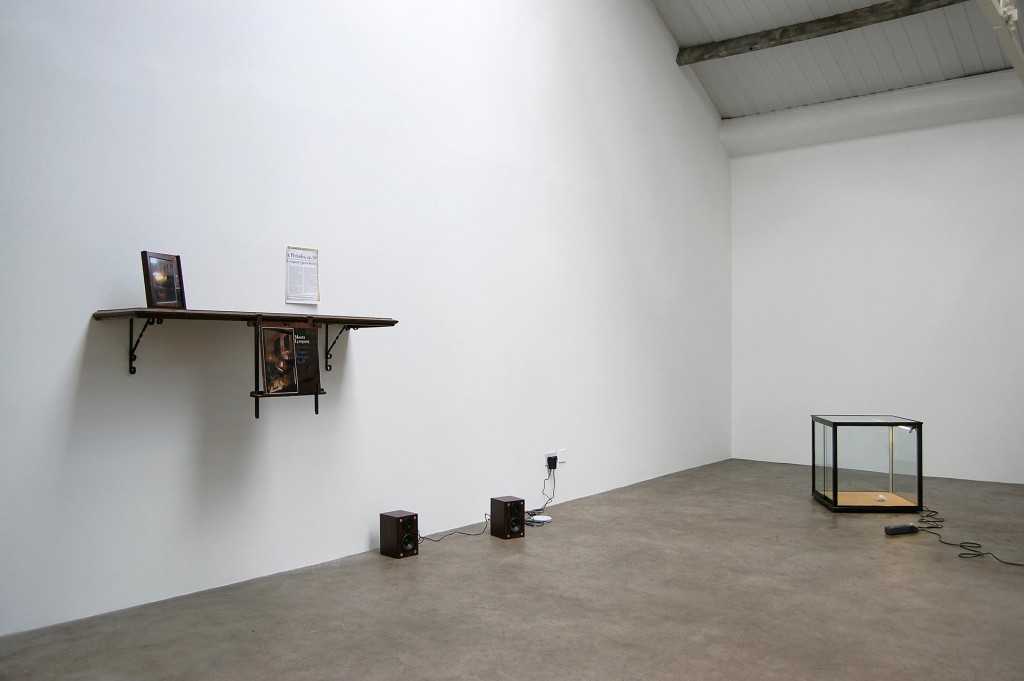 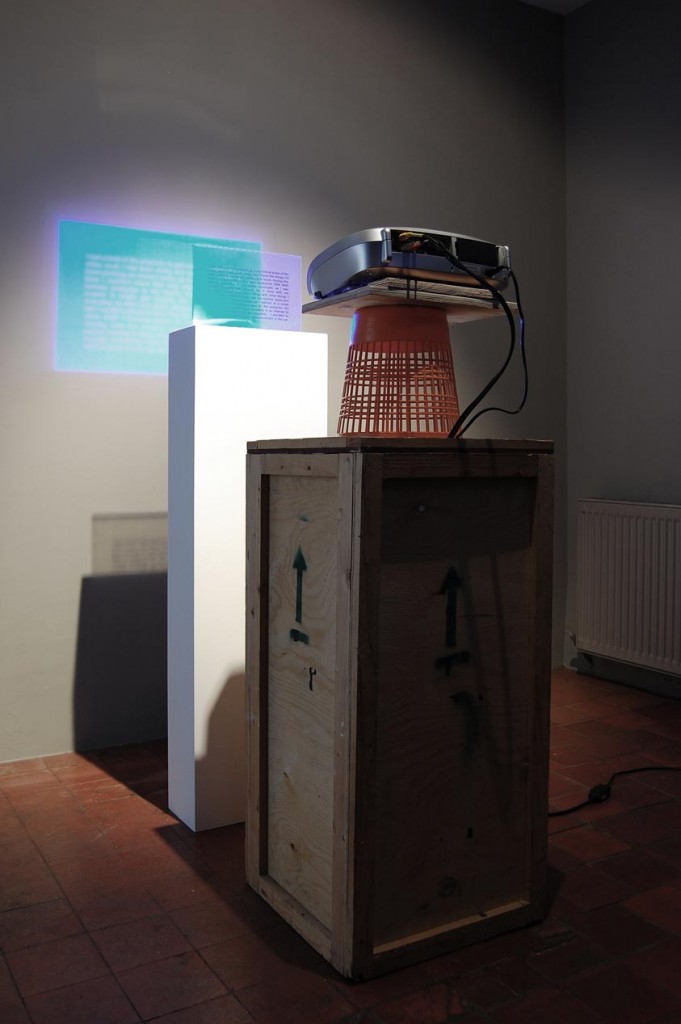 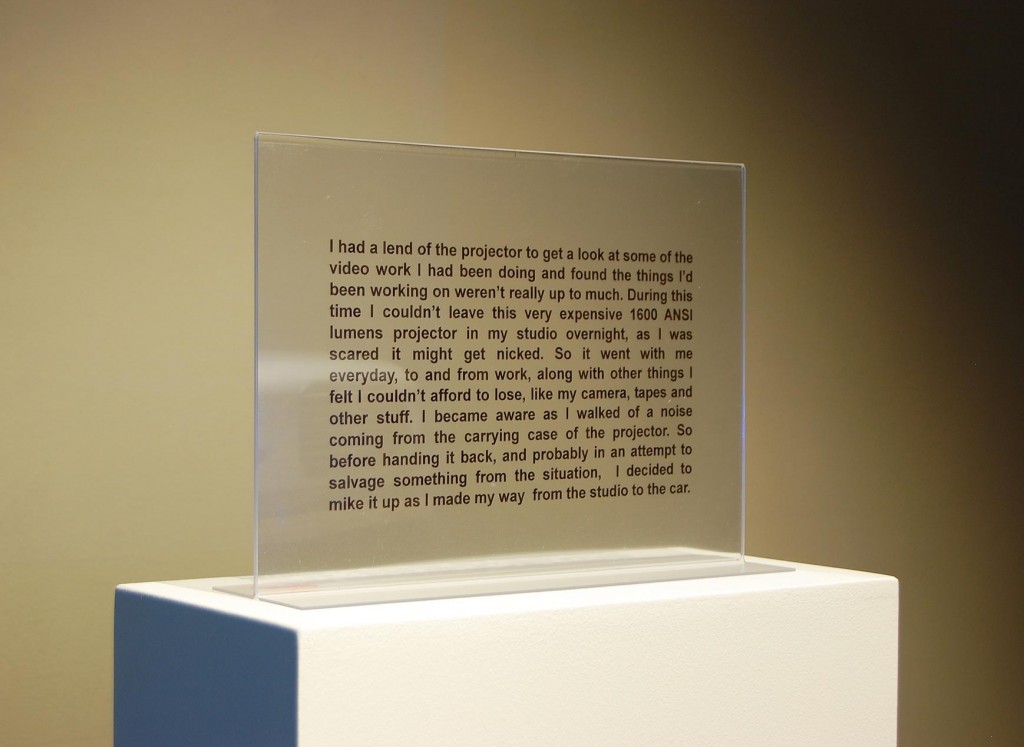 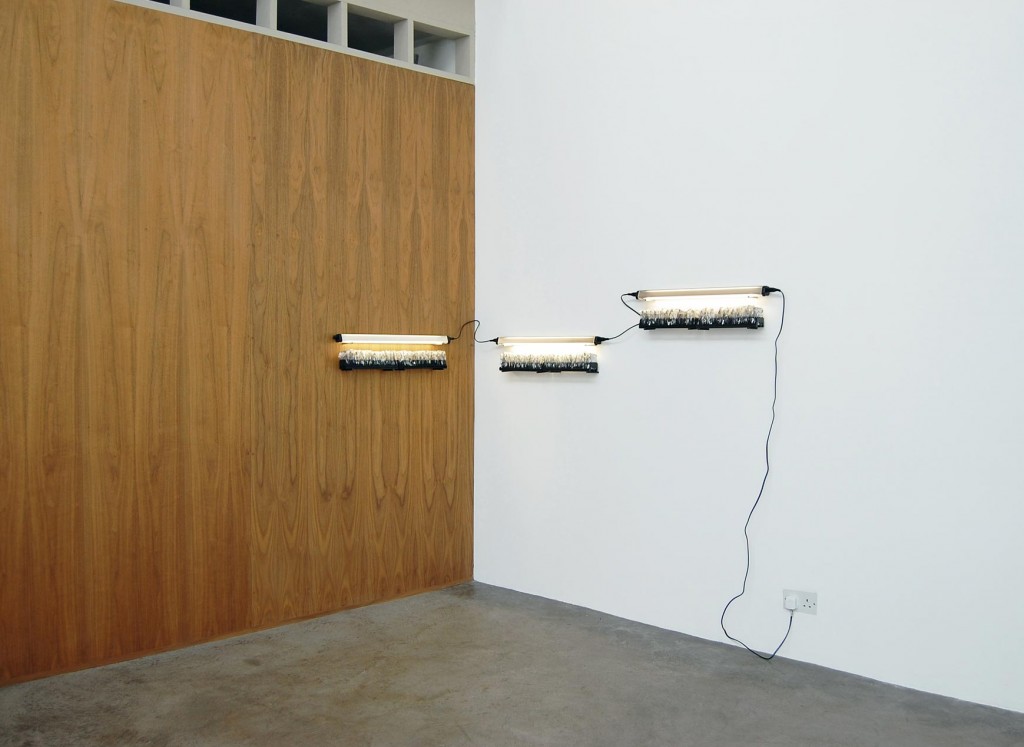 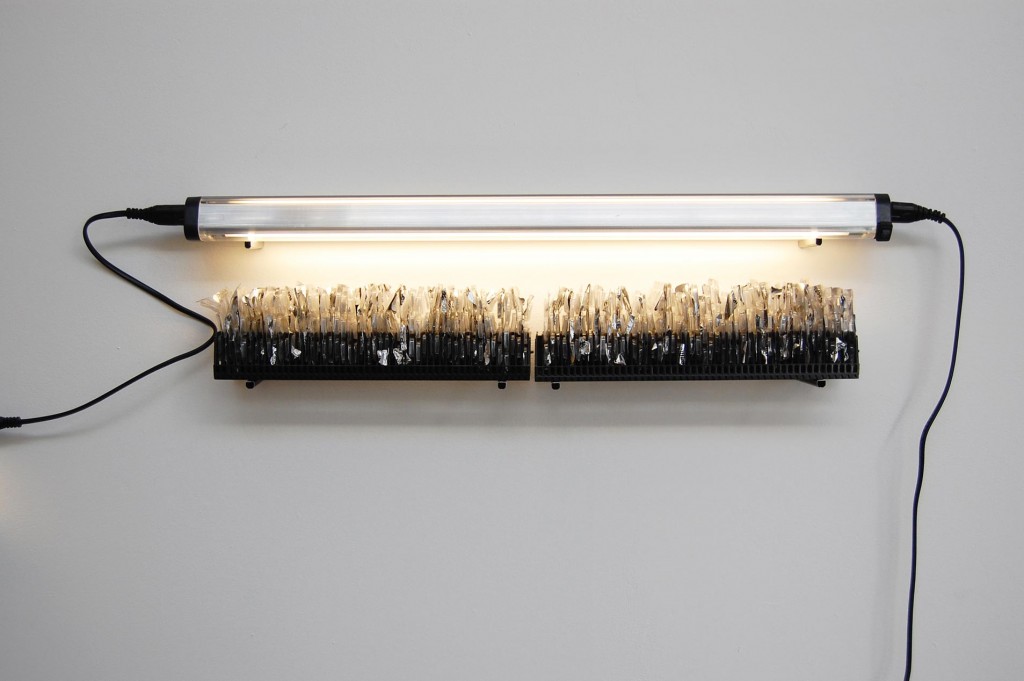