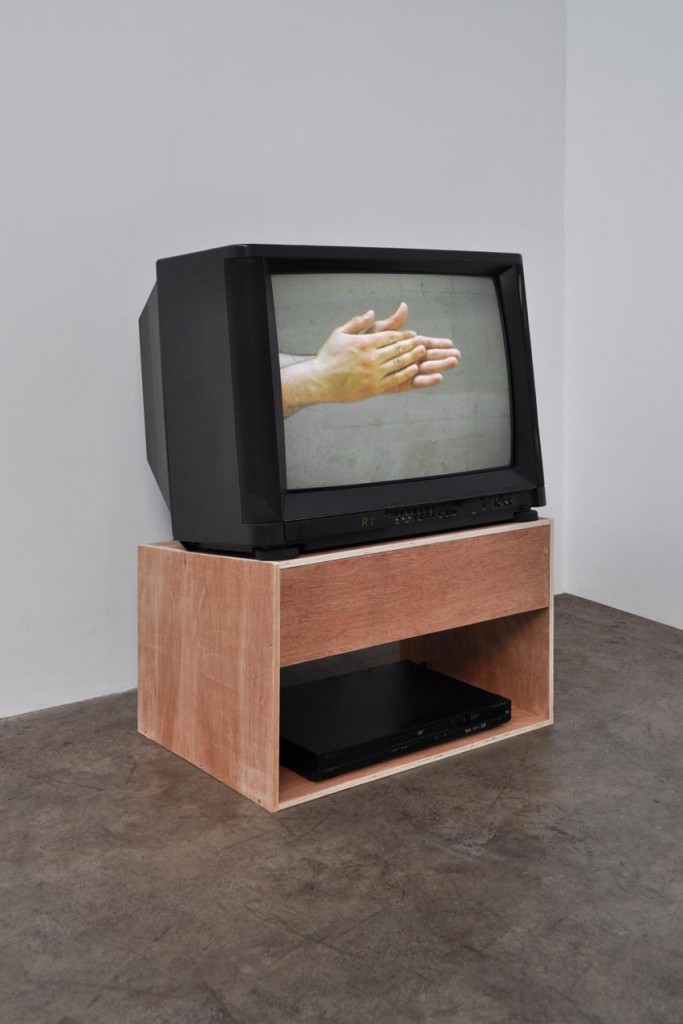 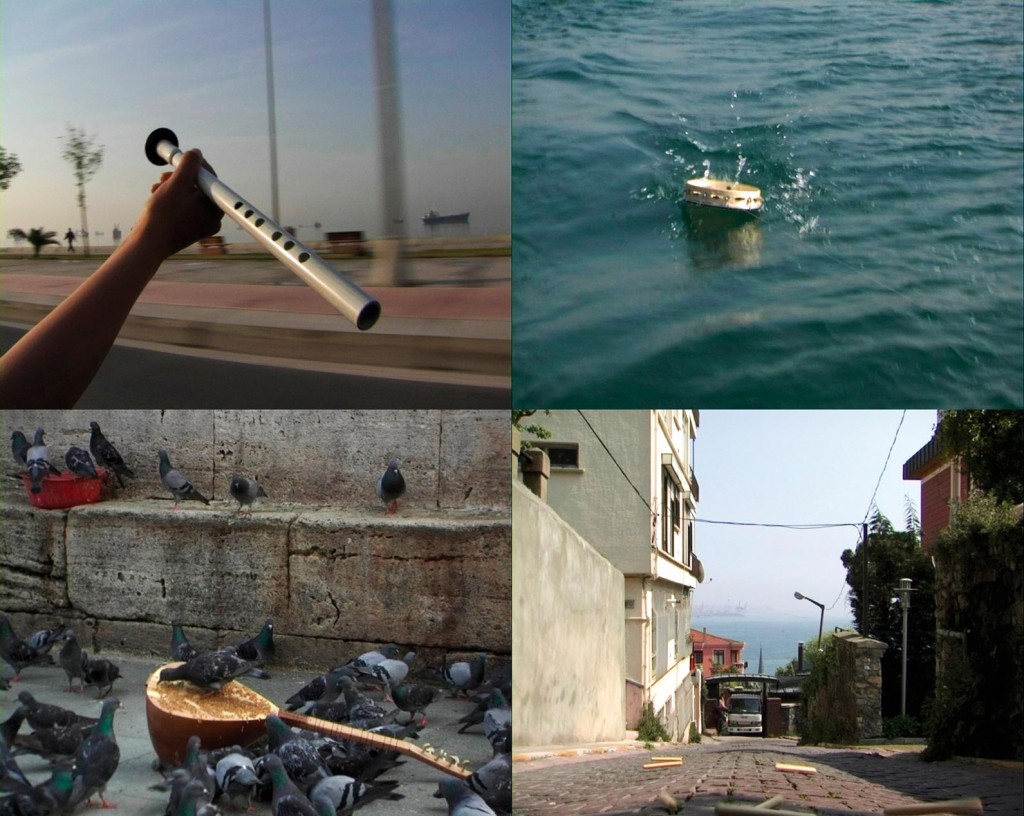 I think I know where I want to go, but I have exactly no idea how to get there.  Like any good road trip, I suppose starting from the beginning and heading, hopefully, for the end, would be the obvious thing to do.

Nevin Aladag’s multi-channel video installation, City Language I, II, III, (2009), represents the beginning and middle of a journey and the exploration of never arriving at a definitive destination. In many other senses the installation stands as a double take, a backward glance in the mirror. Not only is this the second time Aladag has exhibited at mother’s tankstation and that this particular body of work was previously installed in the 2009 Istanbul Biennale, but aspects of the installation literally look backwards while moving forwards. The work is apparently about, specific to, and at the same time, not at all about, nor specific to or of, Istanbul. It is possibly a cultural portrait specific to identity politics, but one viewed by and filtered through national/partisan and non-partisan eyes and perceptions simultaneously – it is both anthropological and sociological and in all ways skeptical of all notions of nationalism, identity and identification. But perhaps most importantly, it employs universal (but divergently western and eastern), popularist signifiers, from shared experience, as key emotional triggers towards meaning, that lead us into essentially personal territory – our own road trip.

Aladag gets directly into our heads, by using the specifics of place to prescribe the possibility of universality; of viewer-driven, individual directions or paths; i.e. the world we see and think we understand (both alien and familiar[ised]), appears to depart behind us as we ride away onto our own sunset, with a unique view behind us, individually coloured by the ‘memory’ of applied meaning. She provides us with a highly subjective viewing mechanism to examine our own backgrounds, cultures and upbringings. Aladag portrays a simultaneity of future, present, and past: the now is manifested in the object of the mirror, which in the English-speaking world are commonly engraved with the warning text; “objects in mirrors may be closer than they appear,” replaced here with emotive passages from contemporary pop songs. The road that lies ahead remains a blur, due to the speed of the vehicle. Only with the spatial and temporal retrospection in the mirrors, by (literally) looking back into the past, does the world become focused and legible. This particularised implant is activated by the slightest suggestion of the pareidolia of song melodies and lyrics. As a radio DJ, on a ‘light programme’ might crassly say; “here’s a memory from 1984…” It’s of course a song and not a memory, and certainly not a universal, one-size-fits-all kind of memory, but what is understatedly meant is the pareidoliac imprint of millions of personal meanings to millions of individuals. Less prosaically, it has been described as “the secret theatre of listening”.

The Istanbul Biennale catalogue text simply described Aladag’s work as taking “a poetic journey to trace the elusive urban reality of İstanbul, with different sound and image fragments brought together in a collage-like structure. City Language II, is an installation of meditative spaces in which scenes from different parts of the city appear in cars’ rear-mirrors imprinted with excerpts from the lyrics of popular songs.”

But as suggested above, there’s more to it than this, the collage of Aladag’s work is as much about what is implied by absence as actually meant by inclusion. The viewer has to both read between the lines and listen carefully to the secret sound track that is deliberately inserted into our brain, by her subtle use of suggestive texts. Shuhei Hosokawa, in his 1984 (a good year for “memories”) essay, of the same title, describes this as “the Walkman effect”; the emotive impact of the application of a ‘soundtrack’ to one’s perception of the world, and simultaneously, the apparent distancing, the shutting-down and off from one’s connectedness to and from the exterior world.

Aladag has, in numerous ways, imported the multi-layered reference of soundtrack, both interior and exterior, and our understanding of tuning-in to a personal-specific meaning, into much of her work and a contextualised understanding of City Language I, II, and III, is informed by a brief description of an earlier project: Hosokawa’s notion of “the Walkman effect” is most evident in Aladag’s video works of lone figures dancing to personal-stereos on desolate city rooftops. Her video, Raise the Roof (2007) – which refers to the performance of the same name – features four women dancing on top of an industrial building in Berlin to music heard only, by them, through their headphones while their stiletto heels punch holes in the roofing. The obviously amateur dancers sport selected lyrics from pop songs printed simply on t-shirts, suggesting to the viewer, in a removed ‘fashion’, the potential for/of subjective or emotive drive in what they may or may not be listening to. High above the city on a summer day, they look slightly out of place and the scenario quotes the now standard advertising non-convention of guerilla tactics and viral marketing? But in Aladag’s version, these autonomous subjects have long since been sidelined, as the city below them takes no notice of them, only the camera for the art work sees. What then is the purpose of the ‘secret theatre’ of listening and dancing to a Walkman when there is no longer an audience?

Similar to her reference to the world perceived by framing and re-contextualising device of the rear-view mirror, this is, we must assume a conscious attempt to an overall cultural cliché, or an artistic double-take on Gillan Wearing’s Dancing in Peckham. Importantly Aladag’s dancers are dispassionately third-person and not a view of the world as refracted through a dystopian vision of self, alone from, or special to and/or misunderstood by the heaving mass of normal others, going about their daily business. But rather a distillation of cultural politics, filtered through an otherness, what might be termed a ‘non’ness or the investigation of near societal invisibility – here we speak of the long-term issue of Turkish identity within Germany. Perhaps a reprisal example of what Timothy Leary termed in 1967 as; “turn[ed] on, tune[d] in, [and] drop[ed] out”.

Oddly this brings me (almost neatly) to Dennis Hopper (?).We are transported to Venice Beach, and standing in Hopper’s house in front of a framed photograph hung on its wall. Meanwhile, thinking of Aladag’s power of suggestion, all sorts of 1960s musical Americana is playing in our collective heads.  Turning to a companion I expose my stupid and extensive lack of knowledge of such useless things, by proffering, “Lee Frielander, I guess?” How do we know the things we think we know? Where exactly does such an idea come from, it’s taken me weeks and plenty of research to figure this little journey out. Again just like one of Aladag’s subtle plots, it’s an implant, a half-truth, a fake memory! Something said to me, seen or read somewhere, sometime, decades ago, has left the imprint of an incorrect ‘truth’; that any such image, framed by a rear-view or side mirror, is inherently associated with Frielander’s free-wheeling, beatnik view of the world, as if he evolved the form before time began. Well not so, probe a little deeper beyond that superficiality-pleasing soundtrack and there’s all sorts of meatier stuff in there, perhaps even real truths? The photo was of course, by a very tuned-in Hopper, dating from 1961 and appropriately titled, Double Standard. Further researching Frielander, I find I am both right and wrong, as he is indeed widely considered as the first photographer to make the car an actual “form” for making photographs. Driving across most of America’s fifty states in an ordinary rental car, Friedlander applied the brilliantly simple conceit of deploying the sideview mirror, rearview mirror, the windshield and the side windows as a picture frame within which to record the country’s eccentricities and obsessions – a cultural portrait. It just wasn’t his (and he probably never claimed it to be), he just happened to embark on his journey some twenty years after Hopper’s iconic picture. Ironically, Frielander’s most recent, and perhaps his most powerful work is based upon close-up images of a closed-down environment, as seen from the point of view of being immobilised by chronic arthritis, not the free-wheeling visualisations of liberation and open space and possibility. We can never really know where journeys will eventually lead us.

Similarly, Aladag, a brilliant magpie of accrued meaning, and perhaps like Frielander, has appropriated the metaphor of the rear-mirror to her own distinct purpose, using it here to allow us to dispassionately re-assess known truths. Subjectivity potentially empowers a sense of empathy towards others, by suggesting that we can only look at others by looking at ourselves first. Thusly, no one gets to judge or assume how or where things are. Only then might we know where we want to go and how to get there.  Otherwise, I’m buying a Chopper fitted with a Sat Nav.

Nevin Aladag was born in Van, Turkey, 1972, and raised in Germany.  She studied sculpture at the Munich Academy of Fine Arts and now lives and works in Berlin.  She has previously exhibited at mother’s tankstation in the curated exhibition; The Last Blue Sky (2007), and has been included in numerous significant shows such as; Playing among the Ruins, Museum of Contemporary Art, Tokyo (2011), The F-Word, Shedhalle, Zurich (2011), Move, Hayward Gallery, London (2010) and the Istanbul Biennale, 2009. Her work is represented in Berlin by Wentrup, who will present her at Art Statements, Art 43 Basel, in June 2012. 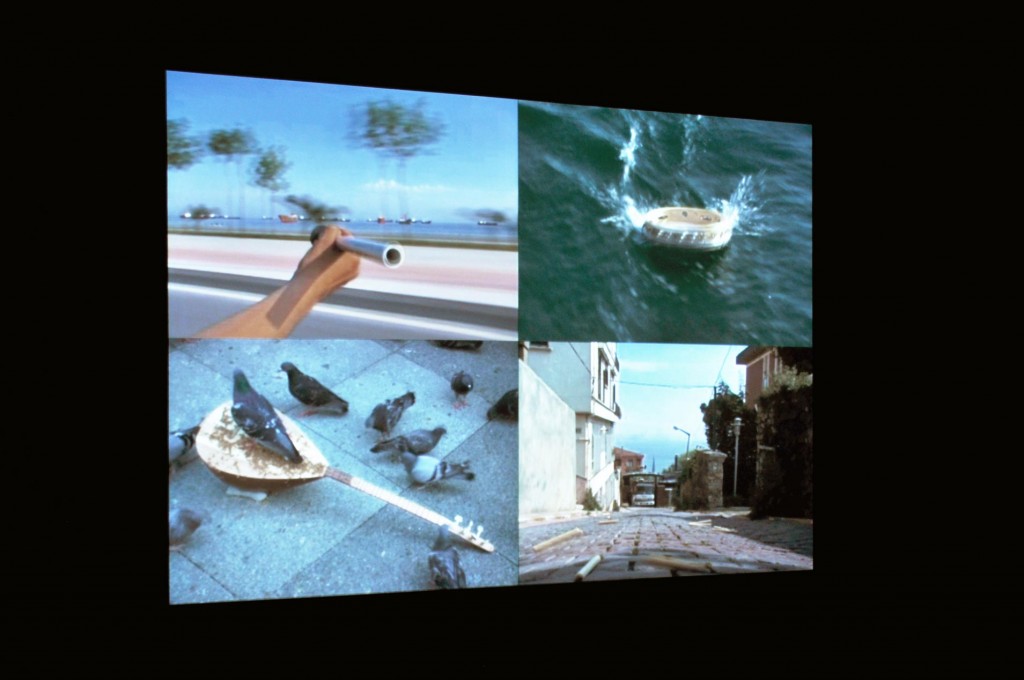 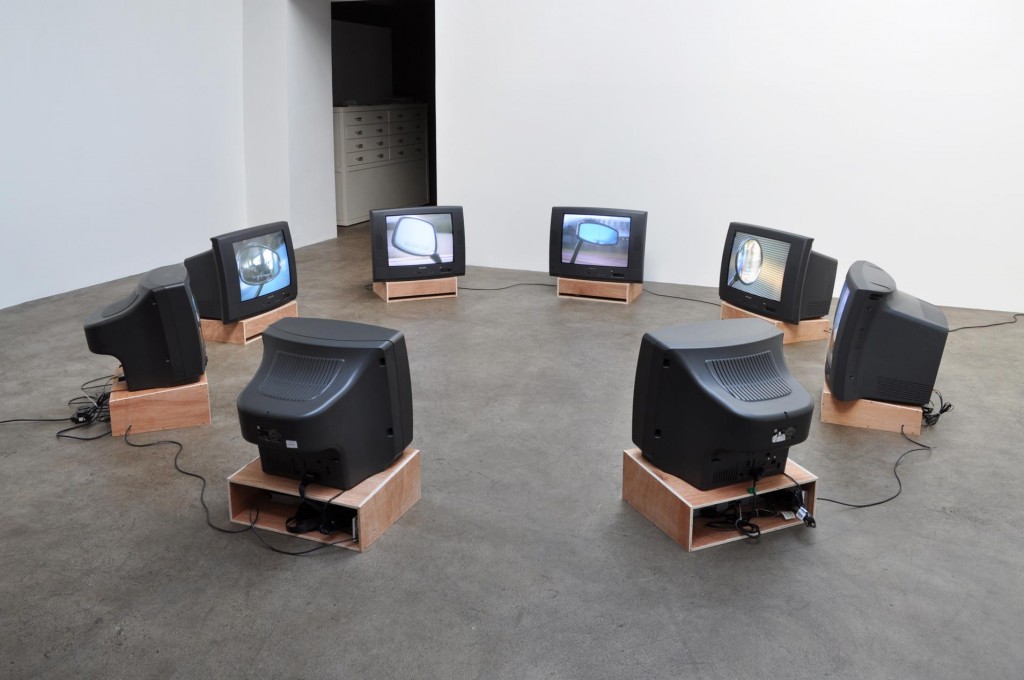 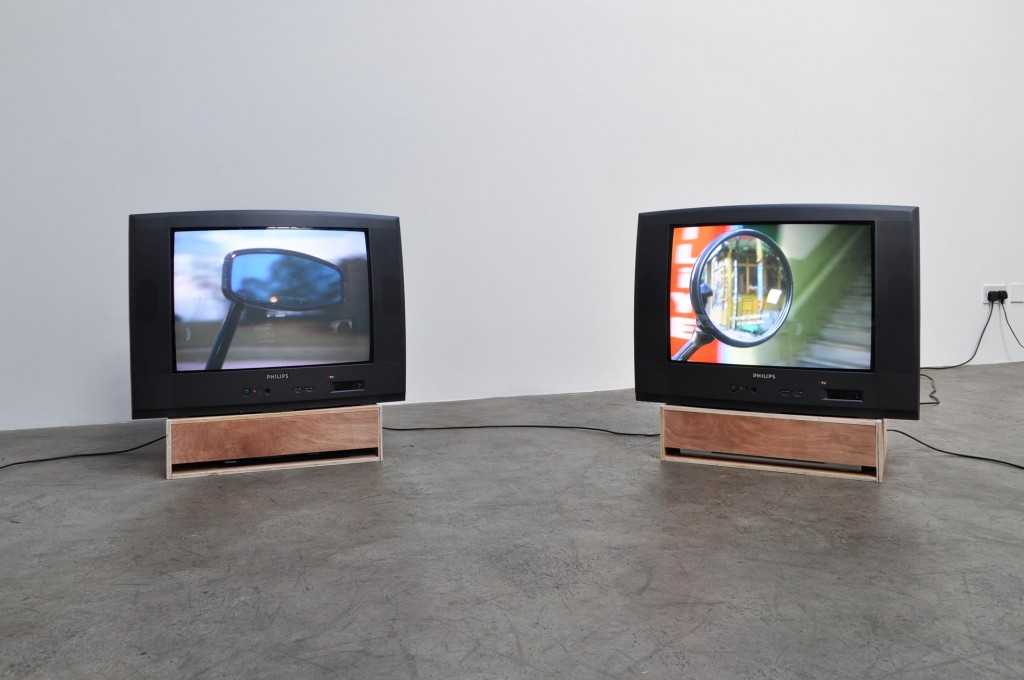 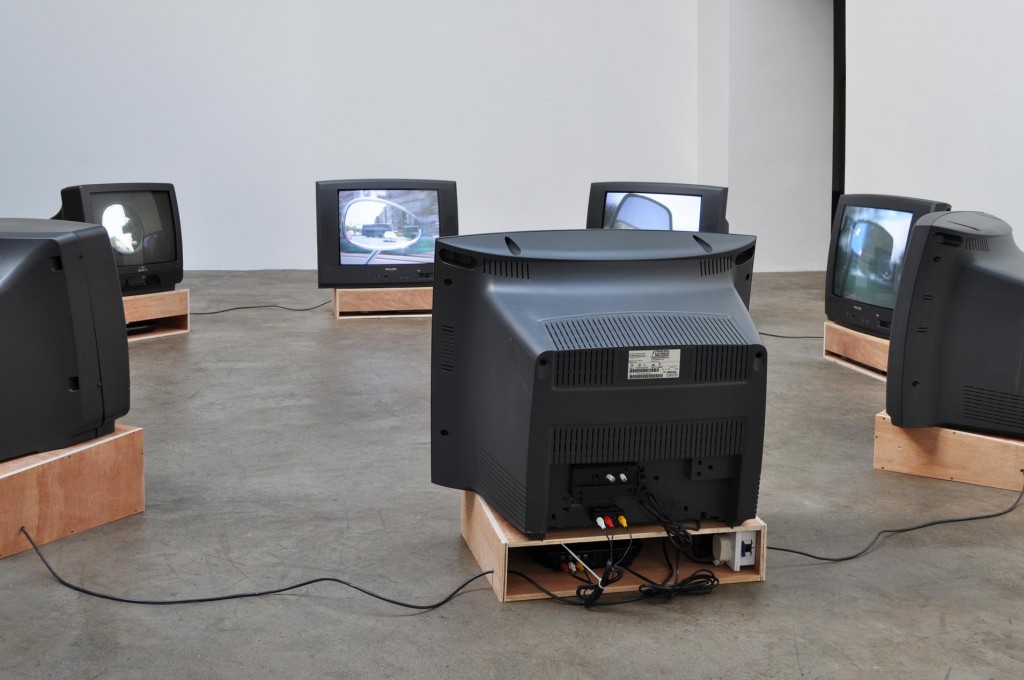 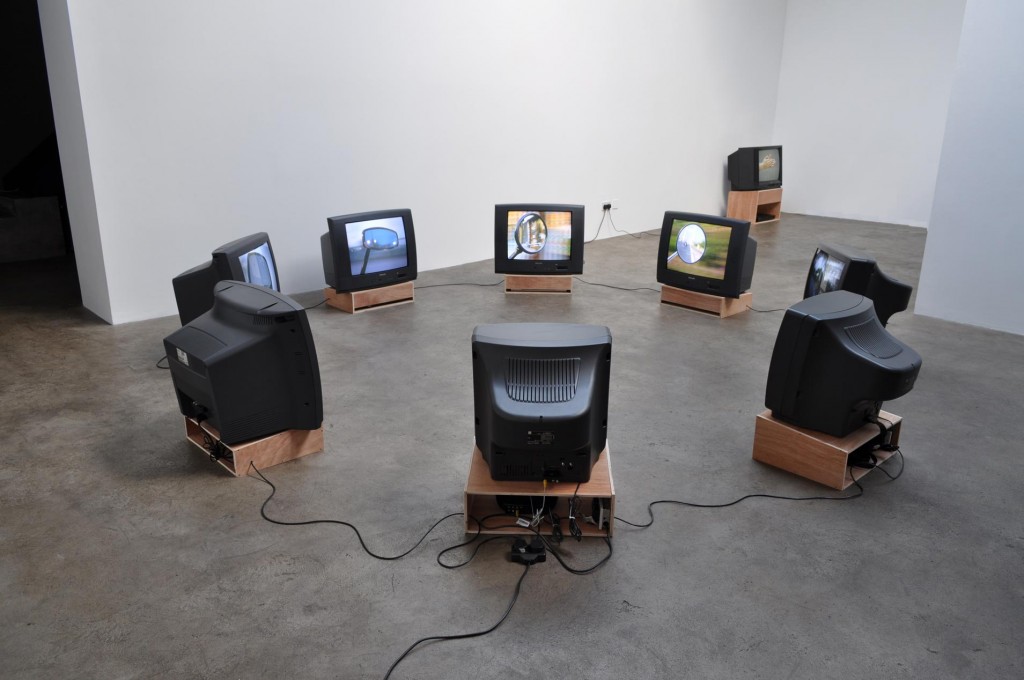 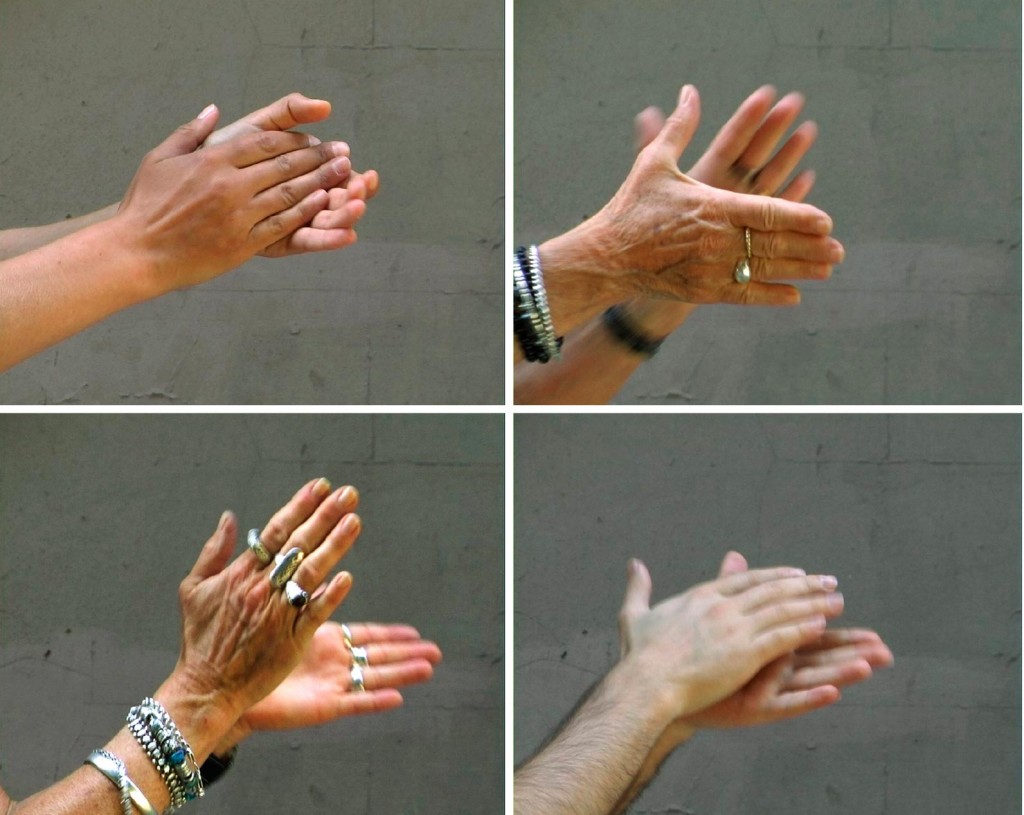