Blackbirds in the Garden of Prisms 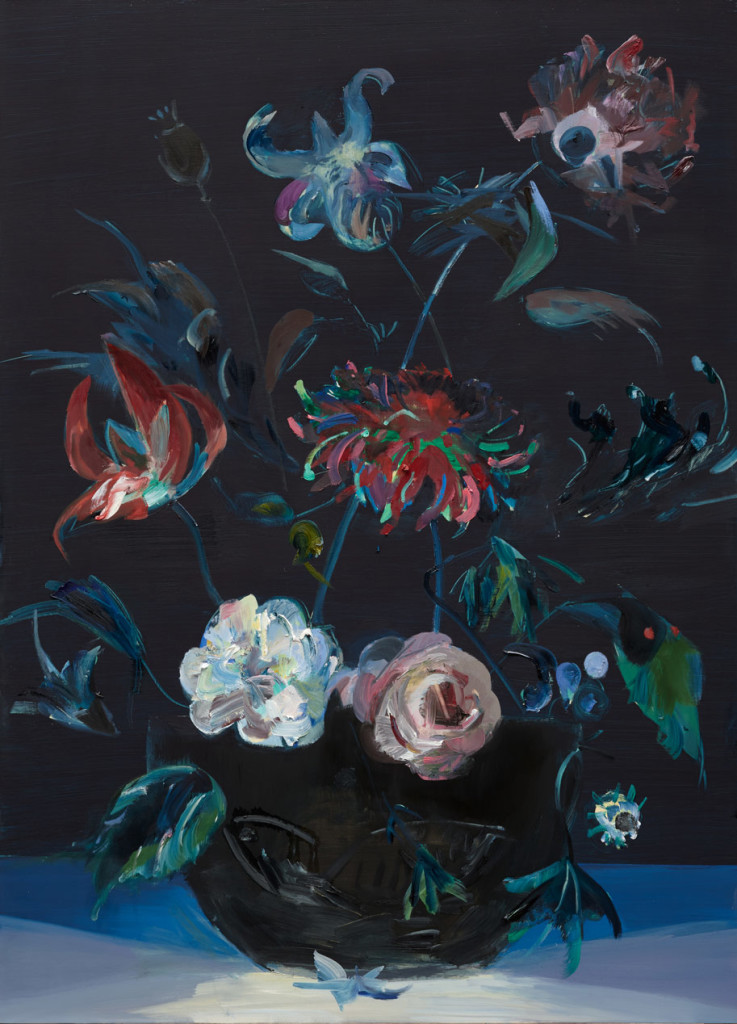 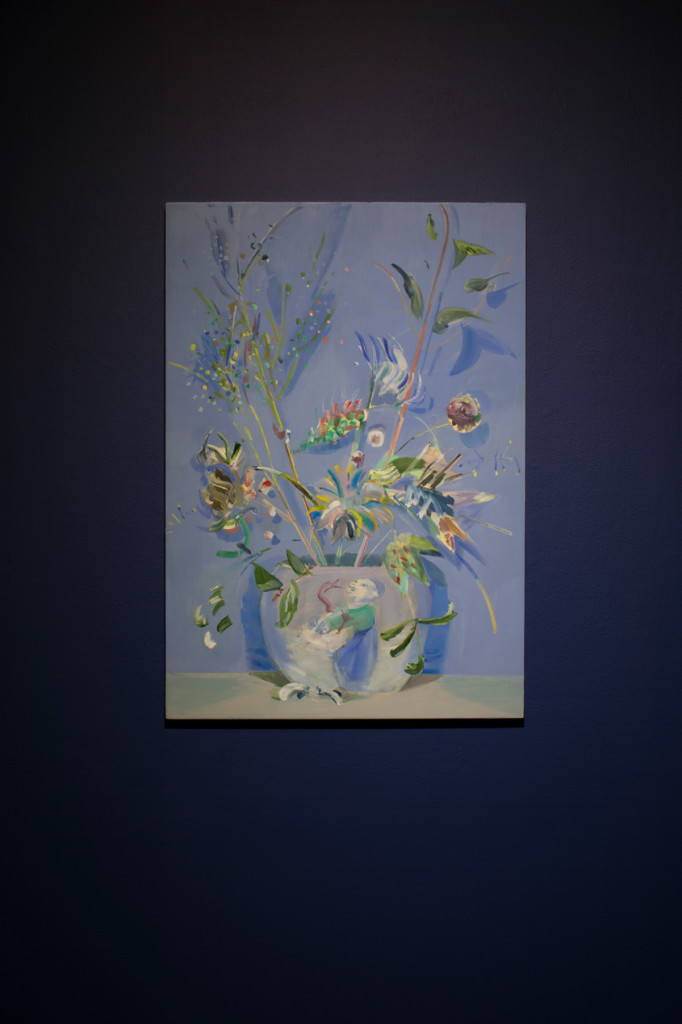 Blackbirds in the Garden of Prisms

In the new body of paintings by Mairead O’hEocha, Blackbirds in the Garden of Prismsii, or as Wallace Stevens determined, suggesting a contribution to something greater than its singular self, the “…small part of the pantomime”iii, there are no actual (references or depictions of) blackbirds; the colours of blackbirds, the jewel-like contrast of an eye against dark plumage, yes, but no physical birds. Nor prisms. Nor, in the vicinity where O’hEocha intellectually and practically fabricates her pictorial world, is there anything approximating a garden. Best known for scenes of urban liminality that brought her work to prominence: the substantive subject of her two institutional shows to date, Whisper Concrete and via An Láriv, and the seven paintings of seven walks – morning and evening – that constituted her Art Basel Statements presentation (2013), the real world around O’hEocha’s studio is the opposite of the paradisiacal ‘garden’. O’hEocha surrounds her creative process with brusque city life and the no-nonsense apparatuses of actualitiés. Between the budget travel agents and the second-hand camera store, her second-floor studio is an unexpected revelation of a thoughtful contemporary existence, expressed through paint, one that psychologically unpicks its own history, the thread of things. In the studio, art history volumes of genre painting – of its celebrated and more obscure masters – sit matter-of-factly on floor-to-ceiling shelves, amongst pots, figurines, tins, brushes and their cleansing agents. Similarly, numerous paintings, typically executed on panel, and in various states of completion, rest on wall brackets, competing to hold their position on the walls with never-to-see-the-light-of-day painterly experiments, drawings, miscellaneous studies and watercolours (that also rarely pass out the studio door). Seductive stacks of panels nestle into the corners of the room. Their finger-painted edges too, expose the fact that they have worked and passed, but we pretend they do not exist – they have never been spoken of. Close to a large table-top palette, a solid studio easel holds a work near completion. A visual scan of the room reveals cross-references to abandoned study versions; a section of one has migrated into the final, approved version, the front flower of another has similarly made the cut, many others have not. Further subtleties, inflections and innuendos, trickle down from the other provisional paintings, drawings; commonly from screen-grabs of internet searches, cut and collaged watercolours and paper oil studies. A composite of hard-won ideas reductively expressed. Victor Frankenstein’s Being (a new Prometheus)v, waiting patiently on an Alpine glacier, longing for its maker’s approval.

It is perhaps a surprise that there are hardly any real flowers in the room. A few cut exotics, corpse on the floor. The artist’s notes, that there were flowers, many flowers…but the nature of flora is to die, and this is currently what has happened. They are not here today; a transience crucial to the ideas behind the work. Walking into the studio is somewhat like walking into a systematic, contemporary unpicking of art history. With the multiple activities contained within a single painting, it’s easy to imagine these once being serviced by a busy team of atelier painters, some studiously working on grounds, backgrounds, others on substantive forms, colour blocks, with the master overseeing the disparate elements, stitching them together or ruthlessly rejecting the studio’s collective failures. In the end, maybe only a dozen paintings a year will survive this unforgiving process and emerge alive from the surgical table. They are always the better for it, O’hEocha never releases a work without a genuine personality, without a real reason to go forward into the world.

O’hEocha is an artist who consistently seems to have enjoyed swimming against the tide. Having originally studied sculpture, orientated towards performance, she emerged from a masters at the famously conceptually-driven Goldsmiths College, London, as a depictive painter. The conceptual drive remains, not far below the surface. Given this personal history, her recent engagement with the elevation of the still life genre – long considered as the lowest rung in the hierarchy of painting disciplines is also, little surprise. With origins in Graeco-Roman art, the still life (nature morte) arguably reached maturity in the 16th century world of the Flemish Baroque, where it flourished from an explosion of interest in the natural world and the creation of lavish botanical encyclopædias recording the exotic and oriental discoveries of the New World and Asia. It also prompted the beginnings of scientific illustration and the classification of specimens, the ontology of which continues to fascinate O’hEocha. In addition, wealthy patrons began to underwrite the collection of animal and mineral specimens, creating extensive cabinets of curiosities, which in turn became influential models for painters who sought realism and exotic novelty. Natural objects began to be appreciated in their own scientific right, free of association from religious or mythological constructs and the still life marked a new point of liberation, a poetic freedom from a rigid code of symbolism.

O’hEocha’s two-year long engagementvi with the seemingly simple subject matter of flowers (how hard can flower painting be?) takes the ‘liberated’ subject out of the candle light of the Enlightenment and plunges it into the darkness of Romanticism, where flowers are not just flowers, but powerful, resonant surrogates for things we do not like to think on, but perhaps obsess upon. Stilled life, dead nature, mutability, transience, the inevitability of decay, Vanitas. Shelley, Keats, Jarman, laughter, tears, curtains: “We are as clouds that veil the midnight moon…”vii. O’hEocha’s exquisitely gloomy new paintings either grow slowly from her modernist (Boroughs-like) cut-up process, or are of conscious, re-invented resuscitations of neglected, minor masterpieces, such as Tulips Reinagle, which revisits a lost painting by the late eighteenth century Hungarian/Scottish painter, Philip Reinagleviii, whose painting Tulips (date or whereabouts unknown) just about survives, through a decorative hand-coloured etching, published in 1798 by Earlom, London, that fused the popular interests of his time: still life with botanical and scientific documentative illustration. O’hEocha takes Reinagle’s startling composition – which radically stripped the image to its minimal essentials; exotic flowers (contemporaneously; newly imported to Europe from Turkey) set against sky with impossibly low horizon – embraces it, then ruthlessly tosses it over the romantic cliff, where it lands even more nakedly (all traces of landscape or location gone), into the harsh luminescence of the twenty-first century. Omnia mors aequat.

In contrast, O’hEocha neutrally notes: “The contradiction of faithful observation and improvisation has been interesting… The paintings are, in the end, simply a range of responses, both borrowed and invented, to gaze at the subjective, the mediated realms of the natural world”. Things change, art has certainly changed, but O’hEocha re-fuses the passage from this to that into a single plane: the possibility, the potential of the past and future meet up somewhere around the back, a collision of lost and found on a mountain glacier, not then and not now. I’m with Wallace Stevens, I don’t know which to prefer…ix

i Wallace Stevens, Thirteen ways of Looking at a Blackbird. First published in a collection entitled Harmonium, 1917. The poem consists of thirteen short sections (quoted above is section V), each of which mentions blackbirds in some form. Although generally inspired by Haiku, none of the sections strictly follow its traditional rules. The Collected Poems of Wallace Stevens, 1954, Alfred A. Knopf, a division of Random House, Inc.
ii The reference to ‘prisms’ makes a direct connection to O’hEocha’s continuing interest in the Bauhaus theories of Johannes Itten, regarding the psychological and emotional impact of colour and the prismatic diffusion of light, under the polydomes of garden centres, exemplified in her paintings exhibited in a previous solo show at mother’s tankstation, The Sky was Yellow and the Sun was Blue, (30th May – 14th July 2012)
iii ibid No.1.
iv Whisper Concrete, The Butler Gallery, and via An Lár, The Douglas Hyde Gallery, (both 2011).
v Mary Shelley, Frankenstein; or The Modern Prometheus, 1818, (published anonymously by Percy Bysshe Shelley, 1818).
vi The precursory paintings to this series, titles and dates, exhibited at Frieze, London and The Mud of Compound Experience, Sham Shui Po, Hong Kong, (both 2015) all contained stylised images of combat featured on their containing vases.
vii Percy Bysshe Shelley, Mutability, which appeared in his 1816 collection, Alastor, or The Spirit of Solitude: And Other Poems, Baldwin, Cradock and Joy, London, 1816. Eight lines from Shelley’s Mutability are quoted (interestingly unattributed) in his wife, Mary’s novel Frankenstein; or, The Modern Prometheus, in a scene where Victor Frankenstein climbs the Alpine Glacier Montanvert and encounters his own cut and paste masterpiece, the Being:
We rest. – A dream has power to poison sleep;
We rise. – One wandering thought pollutes the day;
We feel, conceive or reason, laugh or weep;
Embrace fond woe, or cast our cares away:
It is the same! For, be it joy or sorrow,
The path of its departure still is free:
Man’s yesterday may ne’er be like his morrow;
Nought may endure but Mutability
viiiPhilip Reinagle (1749-1833), the son of a Hungarian musician living in Edinburgh, best known as a society, animal (“painter of horse and hounds”) landscape and botanical artist.
ix Ibid No.1 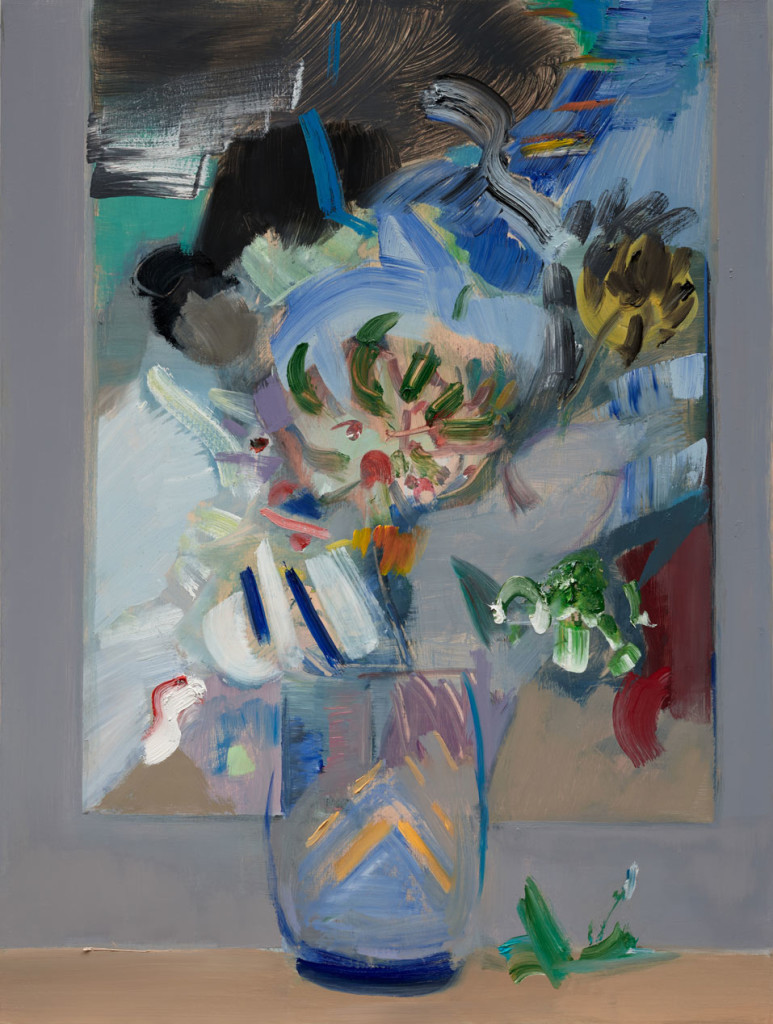 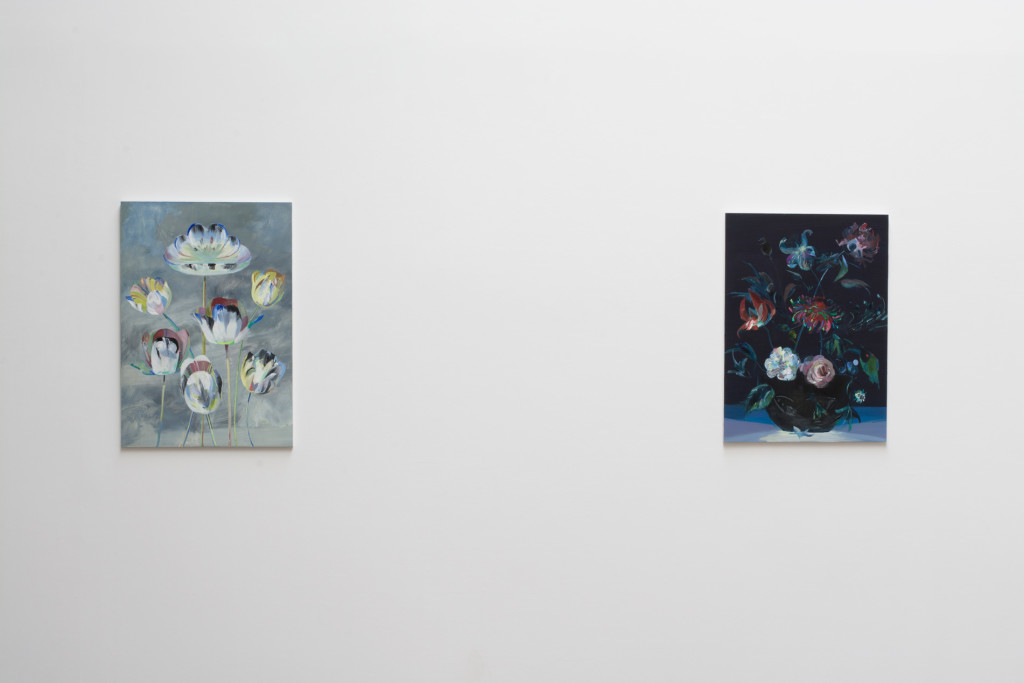 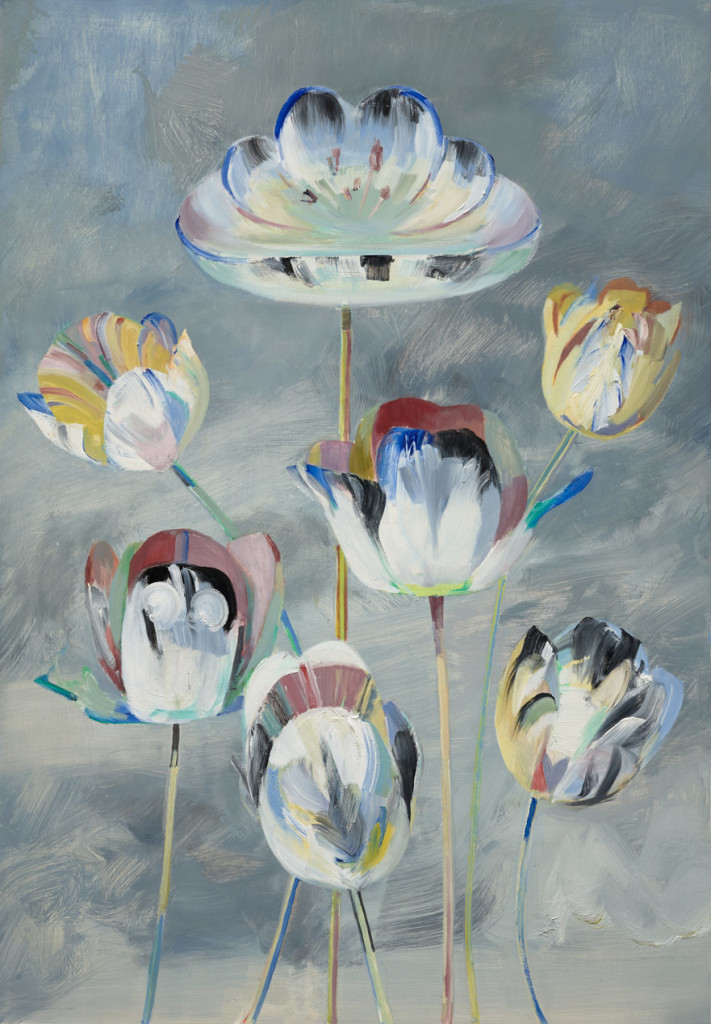 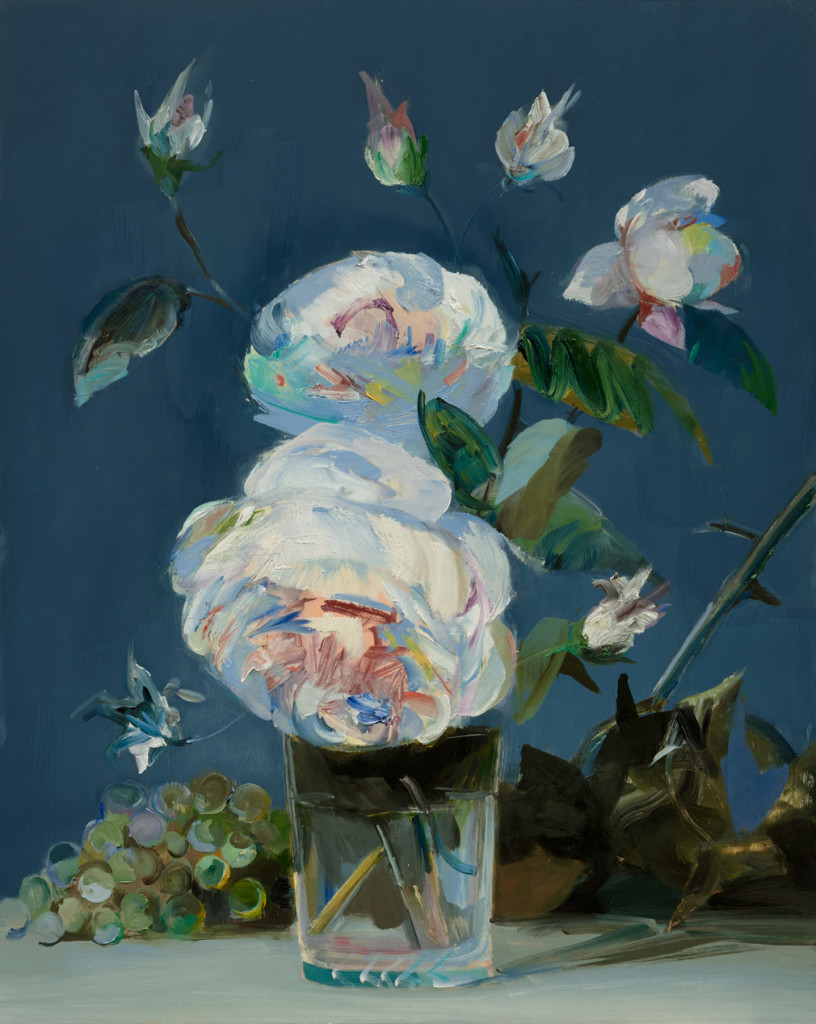 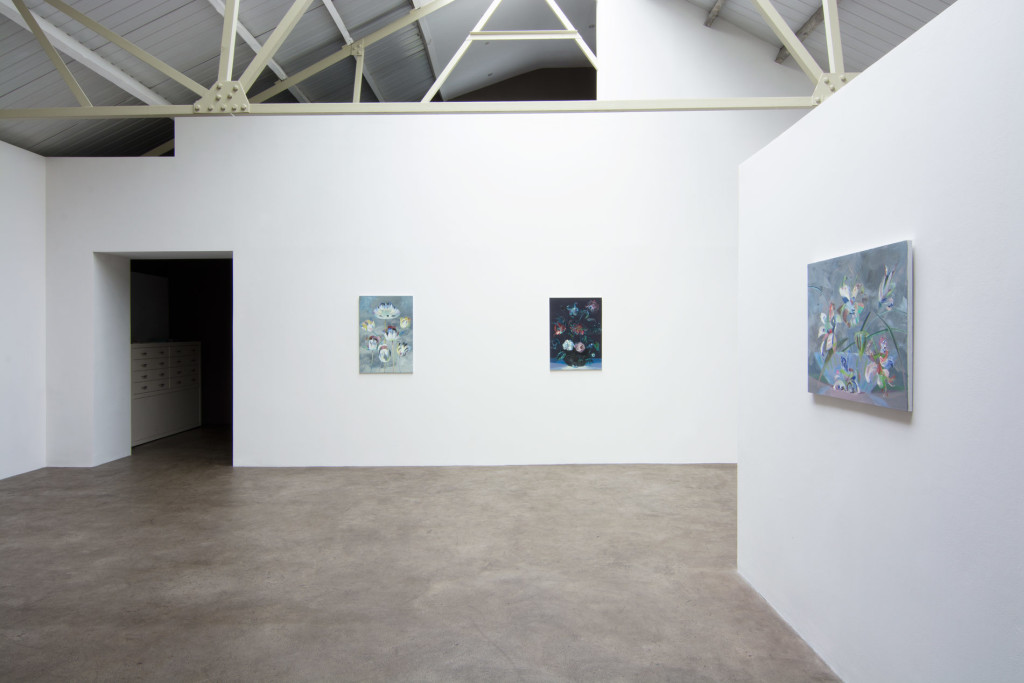 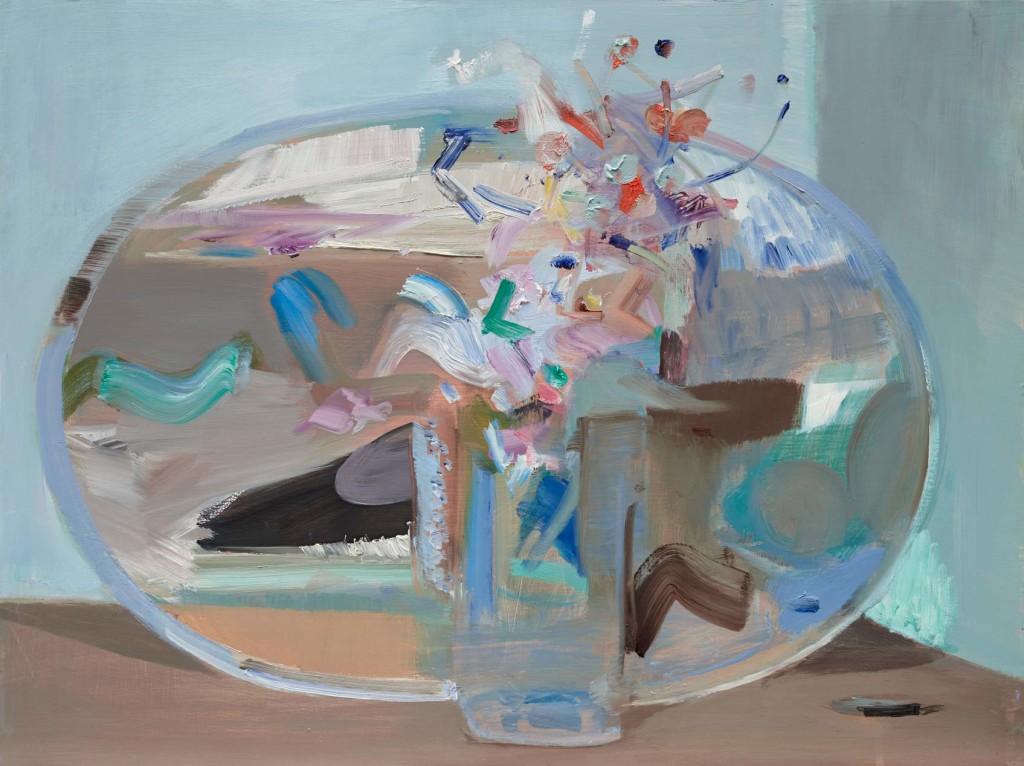 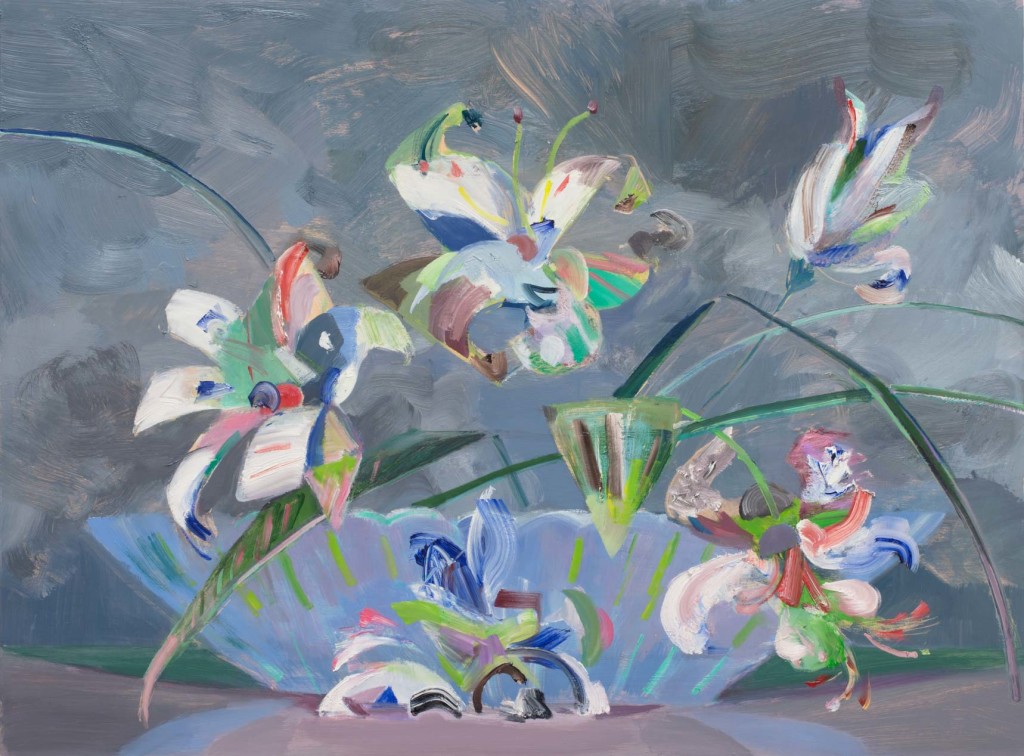 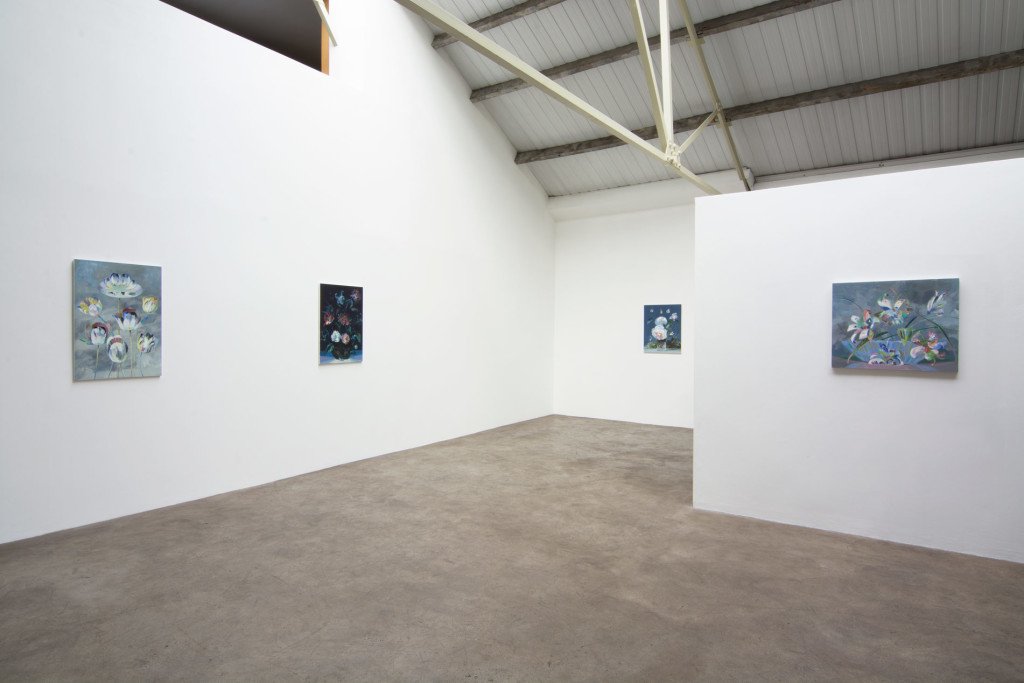 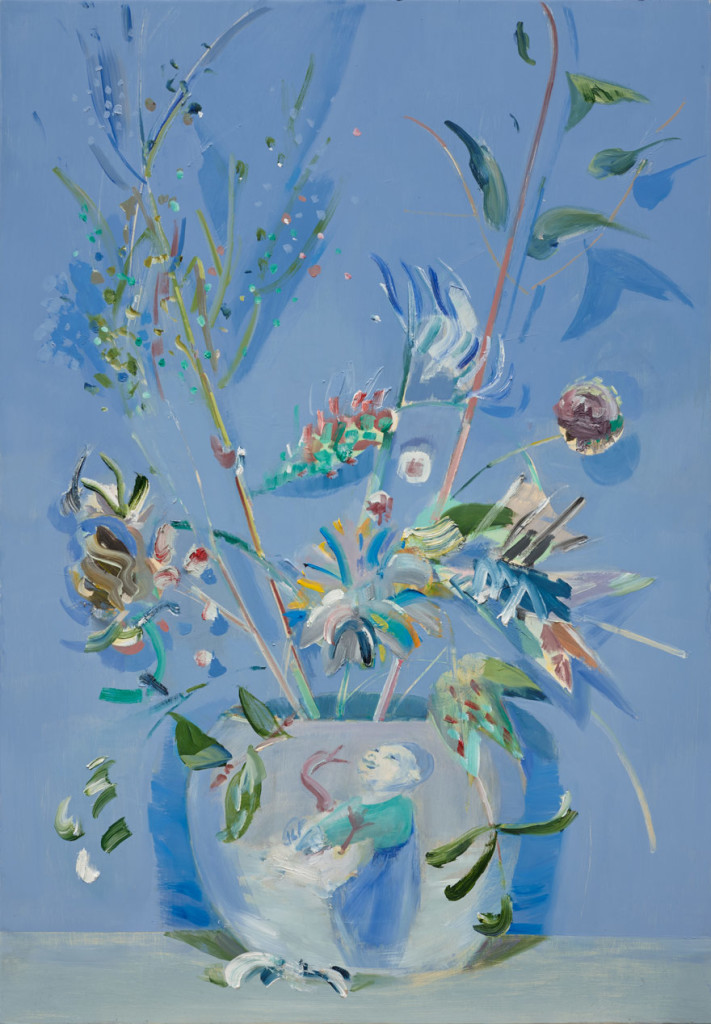 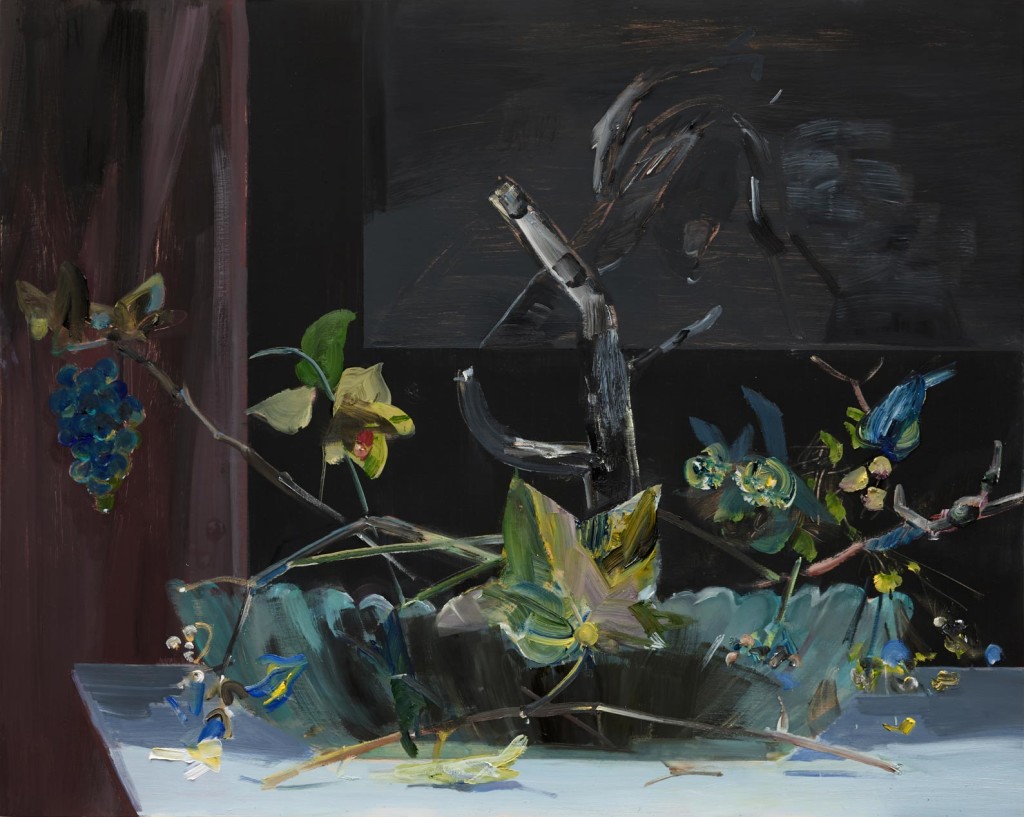 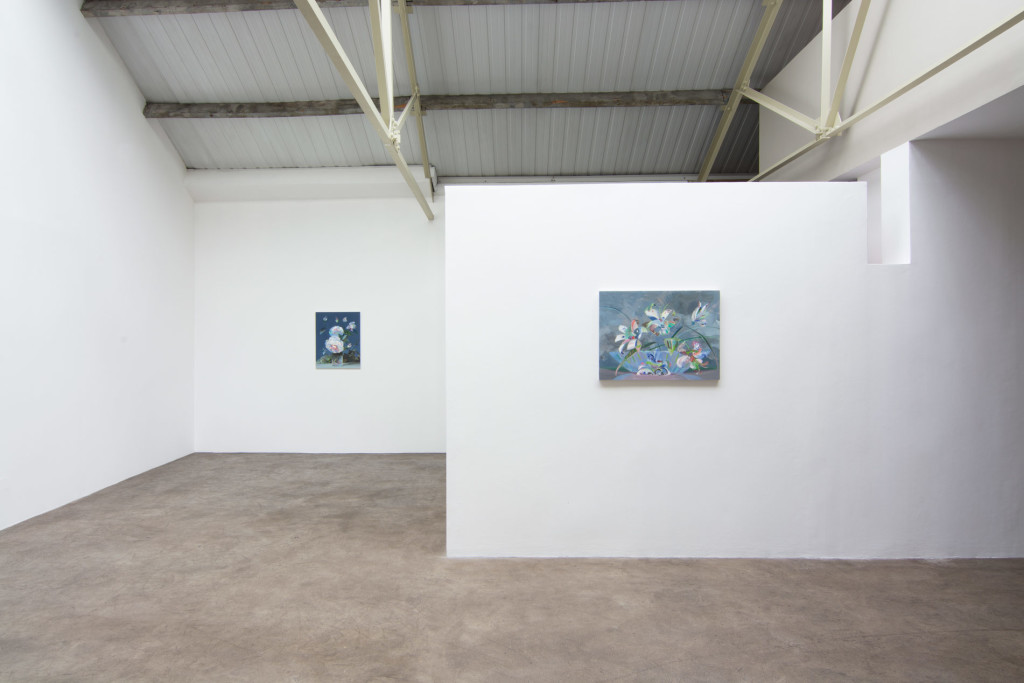 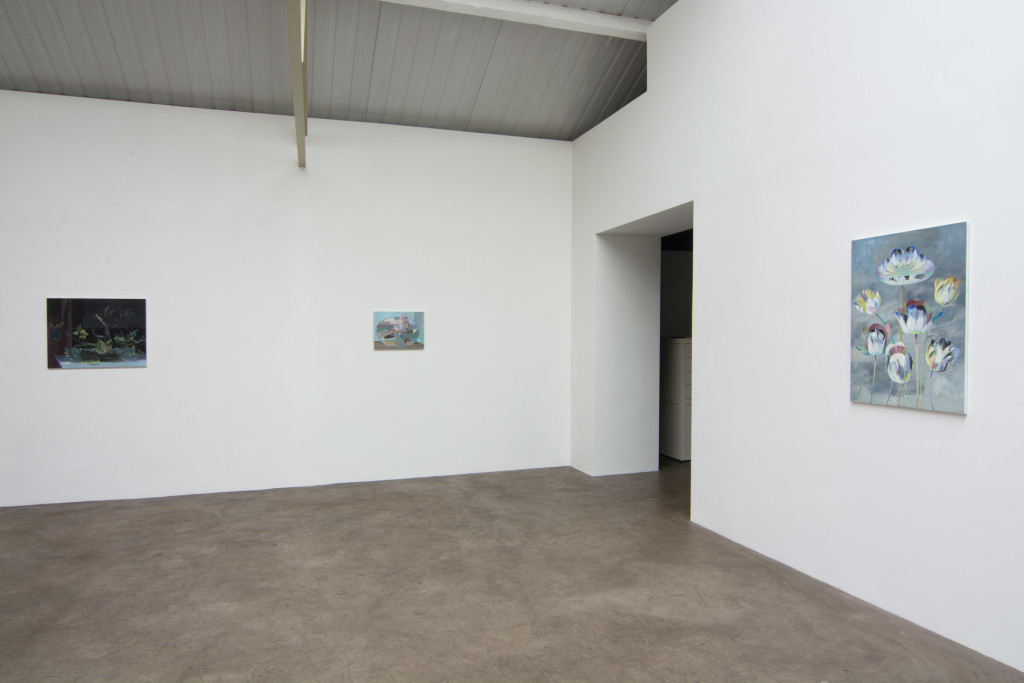